Alcoa and the Yadkin River: What’s next? 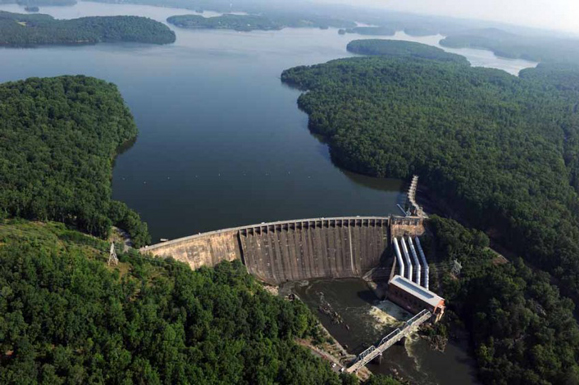 Last week, the Appellate Court for the District of Columbia ruled against Alcoa’s petition requesting that the Federal Energy Regulatory Commission (FERC) proceed with issuing the company a new license to continue operating its dams along the Yadkin River.  This ruling was not the final determination concerning who will own and operate Alcoa’s dams and reservoirs in the future, but rather just the latest chapter in a protracted – and for many people, confusing – battle over the future of an important natural, cultural and economic asset. This article is intended to help the average person better understand the underlying issues involved, and some of the potential resolutions to a complex public policy decision.

The “battle for the Yadkin”, as some have called it, has emerged as one of the Charlotte region’s most fascinating public policy debates in years.  At stake are four dams and reservoirs originally built to supply electricity for an aluminum smelting plant operated by Alcoa for over seventy-five years in the Stanly County town of Badin.  With the smelting plant now closed, Alcoa has continued operating the dams through a subsidiary, Alcoa Power Generating Inc. (APGI), under a 50-year license issued by the United States government in 1957.  Since the power generated by APGI is no longer needed to operate the aluminum smelting plant, it is now sold on the open market at competitive rates as a profit-generating activity for the company. 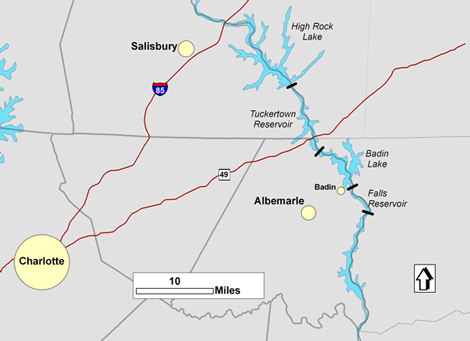 Under federal law, rivers are deemed public resources, and their impoundment for the generation of hydroelectric power must be approved by the federal government under a licensing process administered by FERC.  That licensing process considers the public benefits of each hydro project, such as the generation of power and the creation of jobs, and balances those benefits against such negative impacts as the degradation of water quality and the loss of wildlife habitat.  When such negative consequences are identified, federal licenses are usually written so as to place the burden on the license holder for mitigating their impacts.

Federal hydro licenses are typically issued for periods ranging from 30-50 years, so their renewals usually generate considerable public interest, as local governments, non-profit organizations, homeowners associations, and average citizens view such occasions as a once-in-a-generation opportunity to promote their sometimes competing visions for the proper use and management of these important natural resources.  There are currently three hydro relicensing projects underway in the greater Charlotte region – for Alcoa’s dams along the Yadkin River, Duke Energy’s along the Catawba River, and Progress Energy’s along the Pee Dee River.  However, the other two have not generated the level of intense political and legal maneuvering that Alcoa’s relicensing project has.

What separates the Alcoa project from the others is the decision by the State of North Carolina and Stanly County to oppose the renewal of Alcoa’s license.  Along with other opponents, the State and Stanly County have raised numerous environmental concerns, ranging from dissolved oxygen levels in the reservoirs (an important condition for aquatic life) to the company’s past track record in disposing of toxic wastes on land it owns near the Badin smelting facility.  Economic development interests have questioned the public benefit of granting the license to a company that no longer employs the hundreds of workers who previously worked at the Badin plant.  They argue that the water resources and hydro power generated by Alcoa’s reservoirs could be better utilized as incentives to encourage economic growth in a four-county area that has experienced dramatic job losses over the past few decades, as the region’s traditional manufacturing base has declined. 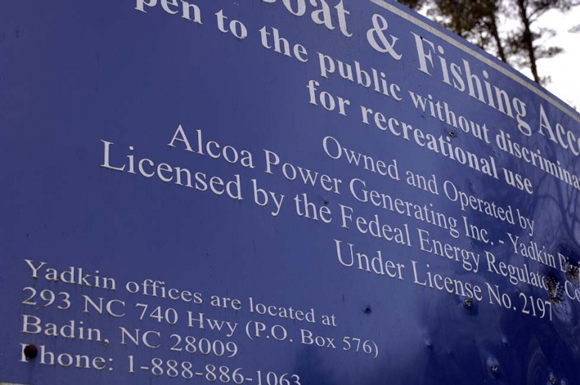 Whether the argument against Alcoa is environmental or economic, nearly all of the opponents would prefer that the federal government deny Alcoa’s application for a new license and then “recapture” that license, subsequently transferring it to another entity who would, in their opinion, better serve the public interest.  The most often-mentioned alternative is public ownership of the dams and reservoirs by the State of North Carolina.  Such an act to “recapture” the federal license would need the approval of the U.S. Congress, and would require fair compensation to Alcoa for its investments in the Yadkin Hydro Project (which includes all four dams owned by the company – High Rock, Tuckertown, Badin and Falls).  Estimates of the Yadkin Hydro Project’s value are in the hundreds of millions, but vary greatly depending on who you ask.

Public sentiment about the issues raised in the Alcoa relicensing debate is mixed, however.  While the State of North Carolina and Stanly County oppose granting Alcoa a new license, the Stanly County towns of Badin and Albemarle continue to support the license renewal.  Some environmental groups, led by the Yadkin Riverkeeper, have used the relicensing battle to challenge Alcoa’s environmental record, while governmental agencies and other conservation groups, including The LandTrust for Central NC, have signed on as signatories to the original relicensing settlement agreement.  Their support stems in large part from the fact that the negotiated settlement agreement between Alcoa and a group of 23 regional stakeholders in 2007 provides for the protection of thousands of acres of Alcoa land around its reservoirs, including 1000 acres to be donated as an expansion of Morrow Mountain State Park that would protect the internationally-known Hardaway Native American archeological site (a National Historic Landmark).

And on both sides of the debate are political alliances that defy conventional wisdom – Republican county commissioners and state legislators joining a Democratic administration in opposition to Alcoa on the one hand, while on the other side are conservative activists who are concerned about property rights and the role of government joining forces with governmental agencies such as the U.S. Forest Service in support of Alcoa’s license.

With last week’s judicial ruling, many people are now wondering what’s next, and asking how long it will take for this issue to play itself out.  The answers to those questions will depend on a few key provisions found in two federal laws, the Clean Water Act and the Federal Power Act.  To better understand how these two laws will influence the ultimate resolution of the Alcoa/Yadkin issue, the UNC Charlotte Urban Institute consulted with representatives from FERC’s Office of Energy Projects, Division of Hydro Power Licensing.  The findings are presented below. 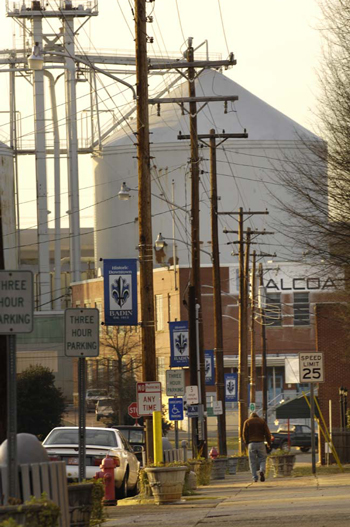 Once the water quality certificate issue is resolved, the attention then turns back to the Federal Energy Regulatory Commission (FERC), which exercises its authority to approve or deny a hydro license through the Federal Power Act.  Assuming Alcoa eventually obtains a water quality certificate from the State of North Carolina, FERC would then be in a position to act on the company’s application for a new license.  However, even a favorable ruling for Alcoa wouldn’t necessarily end the legal maneuvering.  When Alcoa submitted its official application to FERC for a new license in 2006, a number of parties (including the State of North Carolina and Stanly County) subsequently filed “motions to intervene”, thereby providing them with legal standing to file for a rehearing on the license agreement, and potentially setting the stage for another round of legal challenges.

Considering all of this, the best that can be said about when the Alcoa/Yadkin relicensing issue will be resolved is that it could take many years, provided that both sides possess the political willpower and financial resources to pursue it aggressively through all available legal means.  Such a course could eventually land the issue in the hands of the U.S. Supreme Court and the U.S. Congress, and become the subject of law school textbooks for generations to come.  In the meantime, the Federal Power Act requires that Alcoa be issued an annual license to continue operating the dams until FERC makes its final decision.  (The original 50-year license issued in 1957 has already expired, but Alcoa continues to operate the dams and reservoirs as a result of this provision in the Federal Power Act.)

Of course, economic and political considerations – influenced by public opinion swinging one way or the other – could cause one or both parties to abandon their current positions, leading to a settlement that either accepts the current negotiated license agreement, or provides for a new compromise agreement that Alcoa, the State of North Carolina and the numerous governmental and non-profit “stakeholders” can rally around as being in the best, long-term interests of the people of North Carolina.  However the issue plays itself out, the future of one of the Piedmont’s most important natural, cultural and economic assets – the Yadkin River – hangs in the balance.

Disclosure:  The author of this article grew up near Badin (home to the Alcoa smelting facility), and serves on the board of directors for The LandTrust for Central NC, one of the signatories to the current Alcoa/FERC relicensing settlement agreement.  He also serves on the Park Advisory Committee for Morrow Mountain State Park, which stands to benefit from Alcoa's donation of land to the state park under the current relicensing settlement agreement.