Beyond Honey – Get to Know some Native Bees 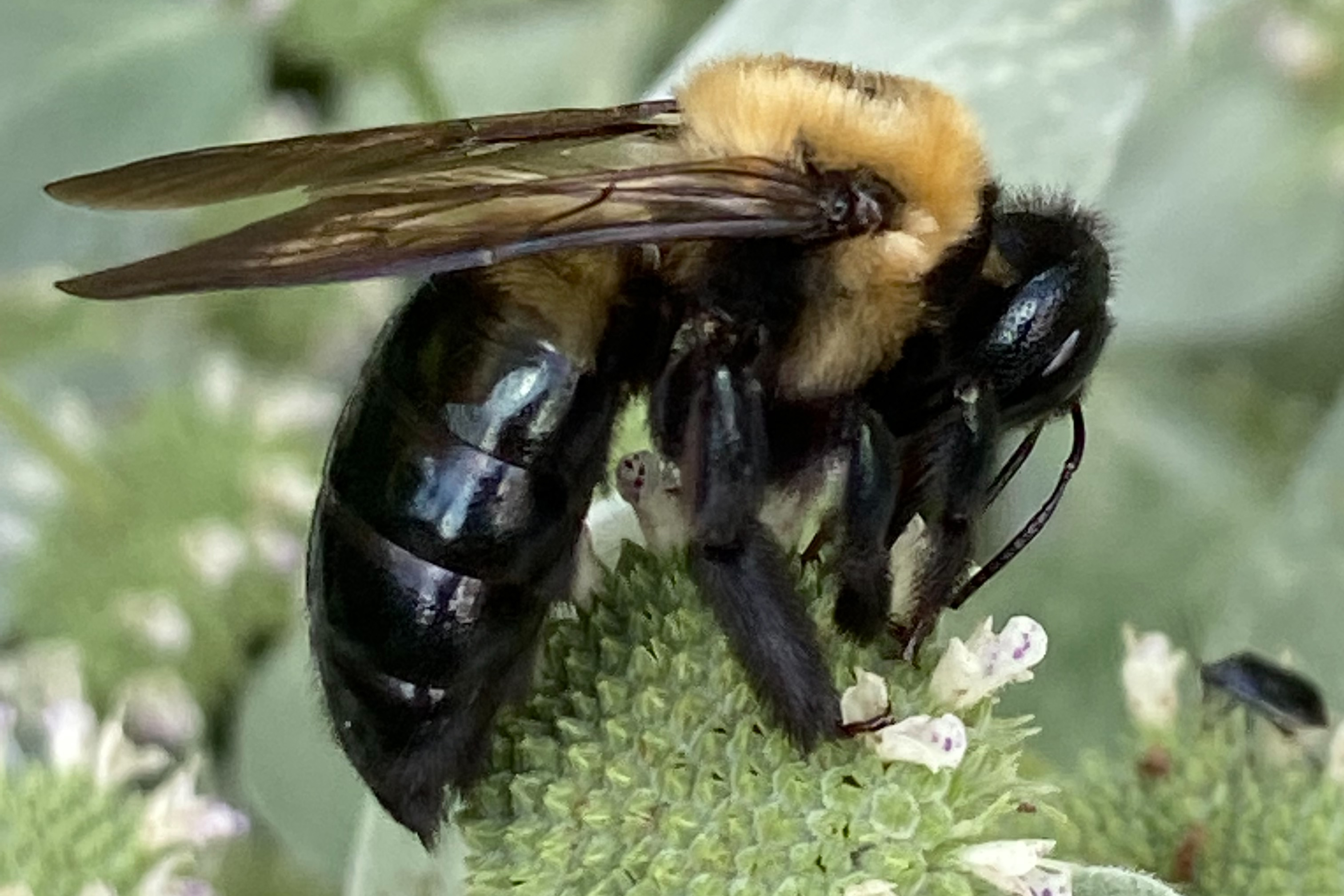 Bee nirvana.  That’s how Gabriela Garrison described one of the fields we’ve converted to native warm season grasses and wildflowers.  Garrison, the Eastern Piedmont habitat conservation coordinator with N.C. Wildlife Resources Commission, was in the Uwharries to conduct point counts targeting a list of priority bird species, but she kept getting distracted.  “I couldn’t tear myself away from the flowers,” she said.  Sweat bees and bumblebees were jumping from one to another, often demonstrating a clear preference for common milkweed over the coreopsis and rudbeckia.

It’s possible to have a similar experience in your own backyard.  This summer, I’ve seen a staggering array of bees in my own garden and neighborhood park, both just over a mile from uptown Charlotte.

Casual bee observation couldn’t be easier.  Unlike birding, you don’t need to get up early and you don’t need fancy binoculars. A decent camera can be helpful, but a late generation cell phone is perfectly suitable as well.

First, it’s helpful to distinguish bees from flies and wasps (The Bees of North Carolina: An Identification Guide | NC State Extension Publications (ncsu.edu).  Bees typically have fuzzy bodies to help collect pollen, including specialized hairs on their legs or abdomen.  Wasps are generally sleek and slender.  Flies have extremely large eyes.  It’s also reassuring to understand that native bees aren’t aggressive.  They might aggregate in a given area, but most are solitary nesters, so they aren’t concerned with defending a hive like honeybees.  I get within inches of them when taking photos and I’ve never been menaced, let alone stung.

Here are a few I’ve observed  in recent weeks.

Not so long ago, I assumed any chunky, black and yellow bee was simply a “bumblebee.”  In fact, our state is home to 15 bumblebee species.  I’ve now seen four in the Bombus genus.  This chart (Color Pattern Guide to Bumble Bees of Illinois, Missouri, Indiana, & Ohio, BeeSpotter, University of Illinois) has helped me learn to recognize their patterns. 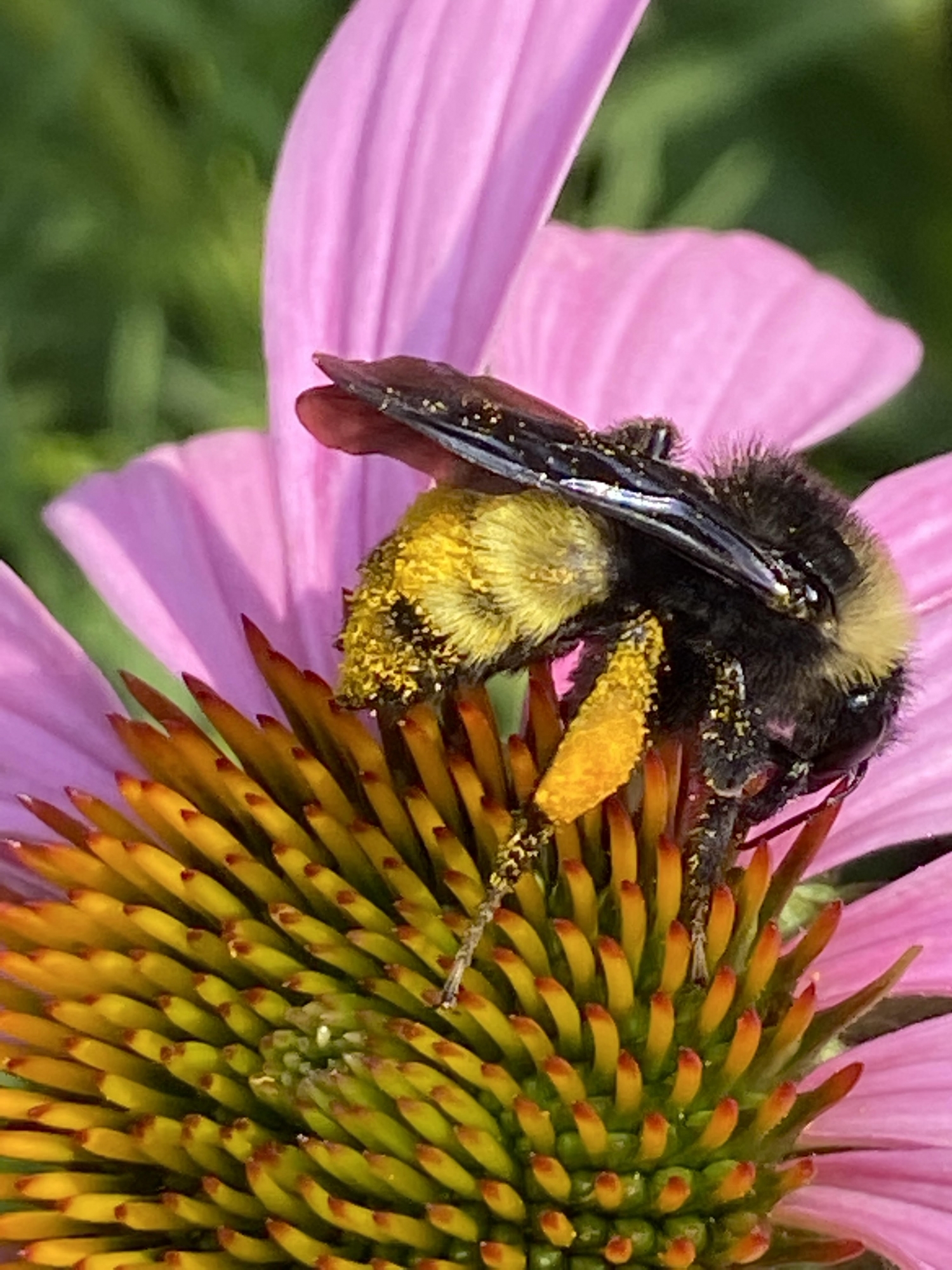 I most frequently encounter the Common Eastern bumblebee (B. impatiens).  I’m always struck by how relatively small they are. And by the subtle stripes on their abdomen, which look like alternating bands of grey suede and black velvet.  The American bumblebee (B. pensylvanicus) is large and dramatic, boldly patterned with ample yellow on its shaggy abdomen.  I’ve seen them appear completely yellow when they’re dusted with pollen.  The brown-belted bumblebee (B. griseocollis) has an understated brown band on its abdomen near the junction with thorax.  The lemon cuckoo bumblebee (B. citrinus) is brighter than the golden yellow of its cousins.

But not all black and yellow bees are bumblebees.  The Eastern carpenter bee (Xylocopa virginica) is probably the most familiar – or even infamous – for their proclivity to nest in the wood of a house or out-building.  It’s larger than most bumblebees and has a shiny abdomen.  There’s also the lovely hibiscus turret bee (Ptilothrix bombiformis) which is actually a type of chimney bee.  It forages on hibiscus flowers and constructs an elaborate mud turret at the entrance to its nest.

You might see evidence of a leafcutter bee before you ever notice the bee itself.  I know there’s one in the vicinity when I find redbud leaves with scalloped edges, perfectly symmetrical semi-circles.  The bees use this material to construct and seal up their nests.  I saw a carpenter-mimic leafcutter bee (Megachile xylocopoides) just this week.  They’re impossible to miss – large and solid black with a bluish sheen to their wings.  The cuckoo leafcutter bee (Genus Coelioxys) has a distinctive pointy abdomen with black and white stripes.

Cuckoo bees are parasitic.  Instead of gathering pollen and establishing their own nests, they lay their eggs in the nests of other bees where their young will feed on their host.  While this sounds alarming, some entomologists say it’s a good indication that bee populations in the area are healthy enough to support a predator.

Many bees peak in the landscape during the summer months, but others appear only briefly in spring. Cellophane bees (Genus Colletes) waterproof their nests with a secretion that resembles the man-made product.  In April, they emerge from my neighbor’s patch of pachysandra.  The homeowners keep a tidy garden, but they’re happy to coexist with these entertaining bees.  They enjoy watching them zip around for a few weeks, too busy to harass people or pets passing by on the sidewalk.

And then there are legions of teeny tiny bees.  The state is home to 133 species of sweat bee (Family Halictidae).  I was wowed by the metallic color of a pure green sweat bee (Augochlora pura). Others are cobalt blue or rust, and some have stripes, but most are drab.  They’re difficult to identify beyond the genus or sub-genus level.  Common names are rarely bestowed upon these exquisite creatures. 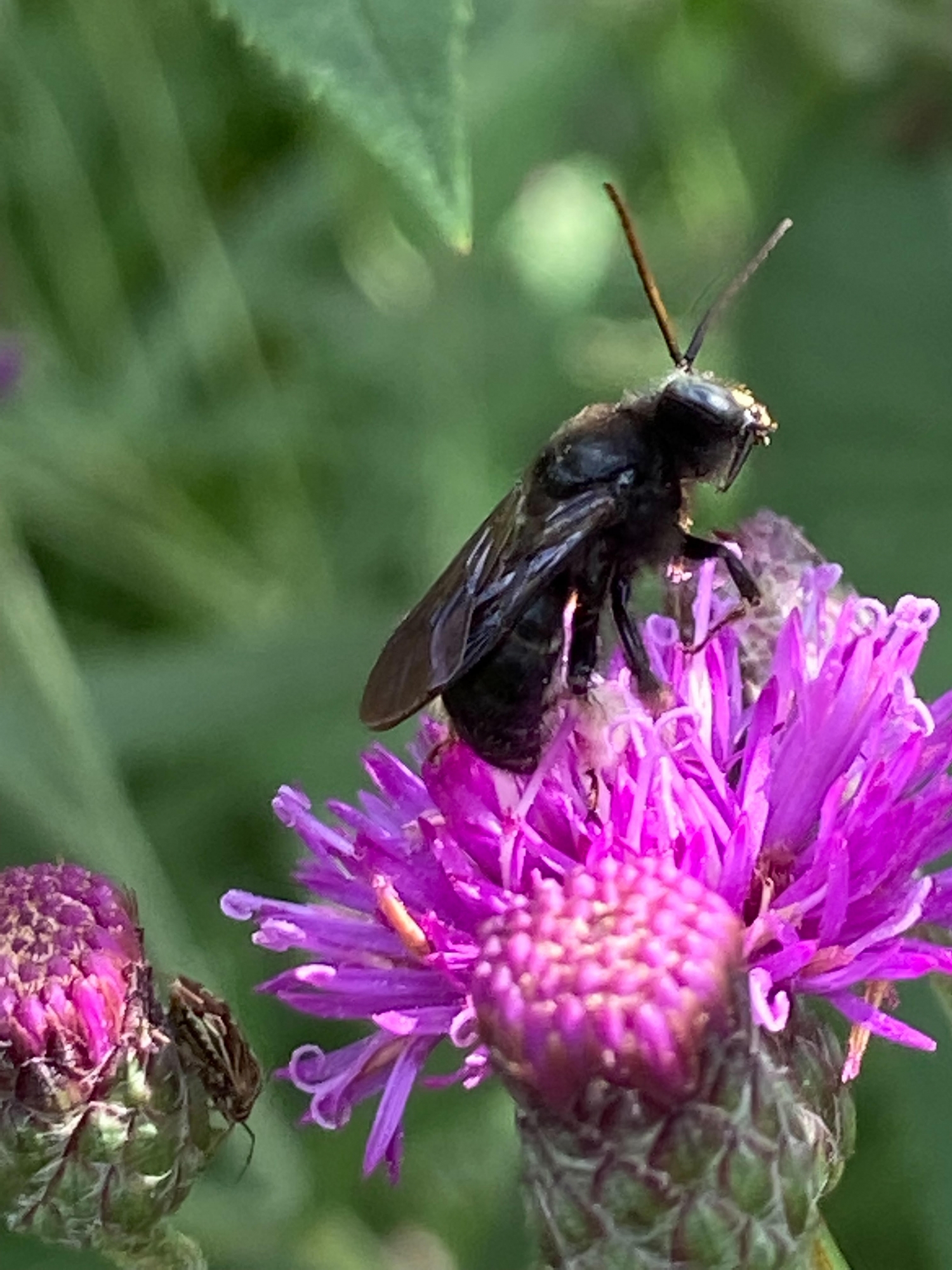 I have a hard time distinguishing them from the Zadontomerus (Genus Ceratina), a small carpenter bee which can also be quite colorful.  Just this week, I encountered a small, dark bee that to my great surprise turned out to have a delightfully specific name.  The modest masked bee (Hylaeus modestus) has distinctive yellow markings on its face and legs.  The two-spotted long-horned bee (Melissodes bimaculatus), which I saw just yesterday, has a name that could be mistaken for an archaic epithet.

I get a kick out of adding a new bee to my growing list on iNaturalist.  That said, I really have no ambition – or delusion – of assigning a name to all the bees that grace our fields in the Uwharries or even my urban backyard.  For that, I’d probably need to buy a microscope and do a deep dive into bee taxonomy.  As a lay naturalist, that’s above my pay grade.  Instead, I’ll consider it a success if I can attract an abundance of species that I’m unable to identify.