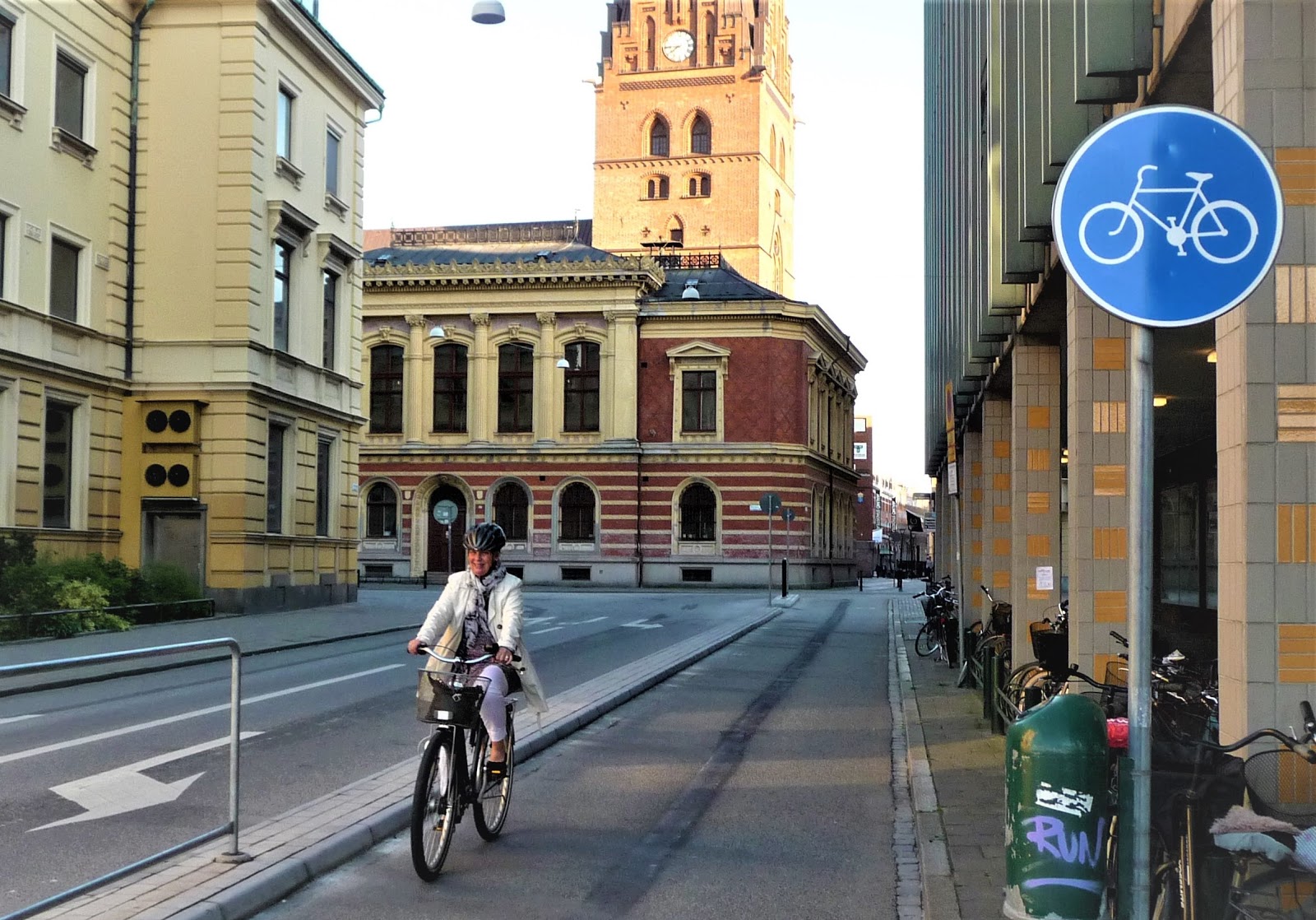 The heightened attention to COVID-19 aftershocks has not  distracted  local planners from tackling related issues that beg for solutions. High among these is overcoming Charlotte's long-standing love affair with the car — especially reliance on driving alone, even when carpooling, light rail, cycling or other options are readily available. Charlotte Department of Transportation Deputy Director Ed McKinney brought this to the attention of City Council’s Transportation, Planning and Environment Committee at its January meeting.

The strategy is part of a new initiative to “recalibrate CDOT’s 2040 Transportation Action Plan,” which is council’s primary reference tool in determining annual transport budgets and bi-annual bond referendums. The initiative also comes with a new name —  “Strategic Mobility Plan.”

Although the current plan was enacted only three years ago, CDOT believes this is an opportune time to recalibrate.

The Strategic Mobility Plan  will include an ingredient sorely missing from past plans: a two-part metric called “mode-share / mode-shift.” This will be used to track the rate of change from driving to other means of travel. Charlotte’s mode-share ratio, based on 2018 U.S. Census data for commuters, is 75% driving alone vs. 25% by other options (such as carpooling, telecommuting or taking transit). CDOT wants to radically lower the driving alone percentage and increase the others. 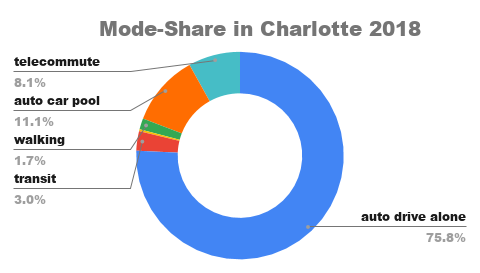 McKinney also outlined other objectives for the Strategic Mobility Plan:

So, what exactly is mode-share / mode-shift, and why is it a critical metric?

Mode-share is a quick snapshot of how people travel. It’s typically illustrated by a pie or doughnut chart with percentages assigned to different mobility types. The chart below shows Malmö, Sweden’s 2016 mode-share. 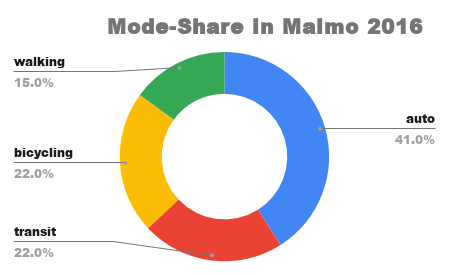 Modal-shift marks the desired switch from one mode to another over a longer time period. It’s all about setting a target and then using a combination of incentives and disincentives to get there.

If the Portland, Ore, Bureau of Transportation meets its 2035 home-to-work commuter target, driving alone trips will drop to an impressive 30/70 ratio (i.e. 30% driving alone vs. 70% other). Portland, Vancouver, Seattle, Minneapolis, and most recently, Austin, Texas, are among a relatively small, but growing number of North American cities where mode-share / mode-shift targets are being taken seriously, according to a survey of over 100 municipalities by the American Council for an Energy-Efficient Economy released in March. 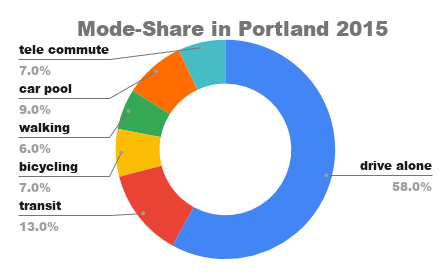 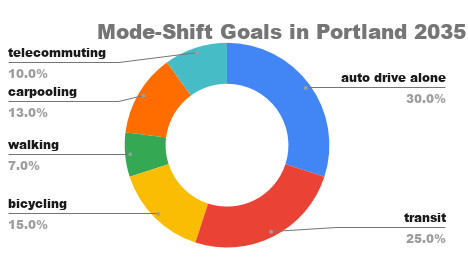 Charlotte is looking closely at Austin, which approved its own 2039 Strategic Mobility Plan last year. Austin is similar in overall size, rate of growth and population density. Both cities currently hover at the 75% driving alone mark.

CDOT is considering a goal of matching Austin’s 50/50 mode-share target. 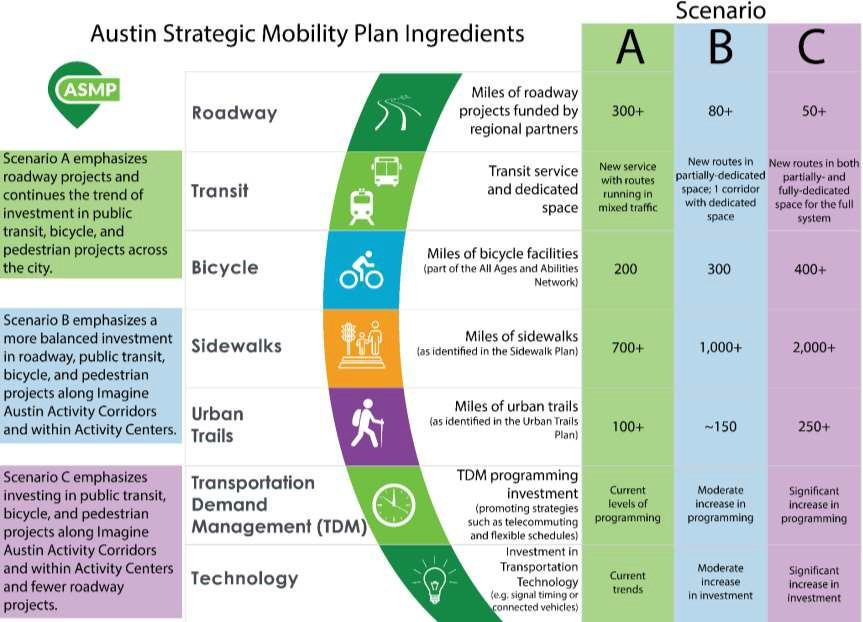 Vancouver ramped up as far back as 2007 when mayor Gregor Robertson, himself an avid cyclist, unveiled an action plan called the “Green City Initiative” to brand Vancouver the ”world’s greenest city” by 2020. It set an aggressive mode-shift target at a 50/50 ratio to be met in thirteen years instead of twenty years as compared to Austin or Charlotte.

That meant the city’s goal was to have half of trips taken by car and half by other means. That goal was achieved (click HERE for a 2018 update). A followup 2040 plan set an even higher target, calling for ⅔ of all trips to be non-auto.

The Vancouver plan also included reducing greenhouse gas emissions to 30 percent below 2007 levels by 2020, and pledged 100% elimination of fossil fuel use by 2040, a move intended to link climate change to transportation as codependent policy initiatives.

Nevertheless, North American cities overall have a lot of work ahead to catch up with their European counterparts. That’s largely because cities throughout Europe doubled-down on auto dependency in the early 1970s in response to the debilitating oil embargo and an upsurge in environmental activism following the global launch of Earth Day.

CDOT will face numerous questions as it crafts its own metrics in the coming months:

And that gets back to potentially the most consequential and unpredictable question — one that McKinney could not anticipate last January: Are the economic and social impacts of the CODID-19 merely putting Charlotte’s transportation system on temporary “hold,” with a rebound to our pre-pandemic modes as soon as the threat of the virus recedes?  Or is the system undergoing an unprecedented recalibration with a long term mode-share / mode-shift ratio unlike anything planners could have imagined in the pre-pandemic era ?
………………………………………………………………………………………...
Martin Zimmerman is a Charlotte planner and urban journalist. His commentaries on transportation, smart growth, and low-carbon cities appear frequently in Plan Charlotte. He directs City Wise Studio USA.