Charlotte’s goal is to mix uses, but change is slow on the ground 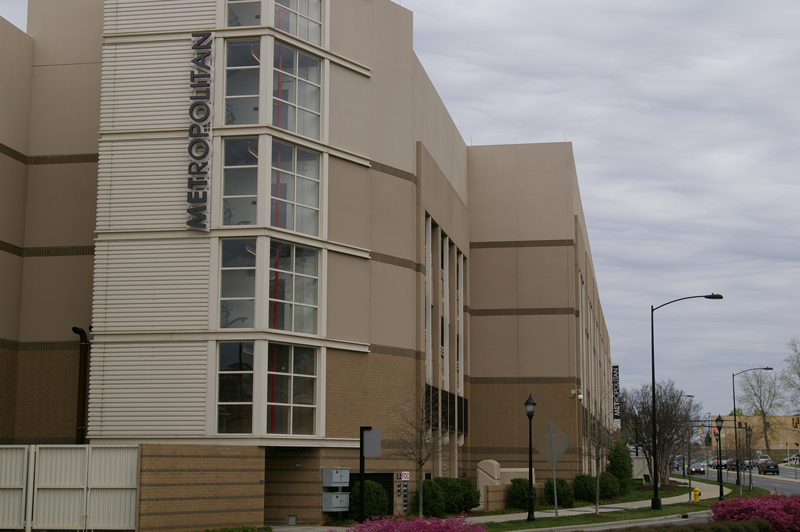 Charlotte isn’t unique in the country in wanting to create more mixed-use development. As in many cities, leaders in Charlotte see advantages to encouraging the kinds of neighborhoods where homes, stores and workplaces are close to each other. It’s a more efficient use of land, can reduce infrastructure costs and traffic congestion, and can make it easier for residents to get to services they need.

Increasing development that mixes uses is one of the goals clearly stated in the city’s 2003 General Development Policies. PlanCharlotte.org wanted to see how much of the city today is actually zoned for mixed-use development, compared to more conventional zoning allowing only one use, such as single-family homes, multifamily homes, office, shopping center, industry, etc.

PlanCharlotte.org looked at the zoning on all the acreage in the city limits and the unincorporated parts of Mecklenburg County that are in the city’s planning jurisdiction—a total of 373 square miles, or 238,720 acres.

PlanCharlotte looked at the zoning in several ways. First, we looked at land zoned for mixed uses and land zoned for single uses. A mixed-use development would be designed to include a blend of residential and office or business uses.  In this analysis a multifamily zoning, for example, or a shopping center zoning would be considered single use. Although some types of single-use zoning districts allow other, less-intensive uses, we treated those zoning districts as “single-use” since typically the uses are not mixed. To measure mixed-use we included districts specifically designed to allow mixed uses, such as TOD (Transit-Oriented Development), MUDD (Mixed Use Development District), and MX (mixed use).

The analysis shows that 91 percent of the land in Charlotte—343 square miles of the total 373 square miles—is zoned for single-use. Mixed-use zoning covers only 9 percent. 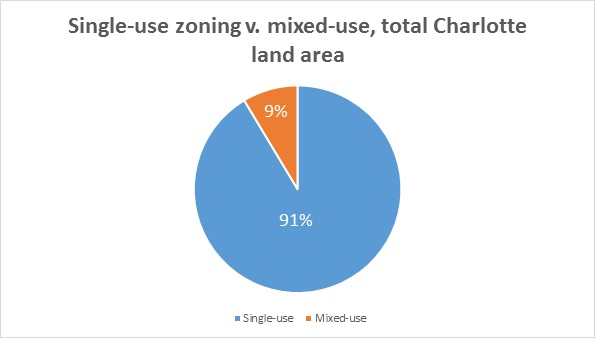 Next, we looked at just the acreage restricted to single use: single-family homes, multifamily homes, office, industrial, etc.  What’s the breakdown of uses in those 343 square miles that are given over to different types of single-use zoning?

Not surprisingly given the city’s low-density character, 66 percent of the single-use-zoned land is zoned for single-family housing.

At a distant second, at 15 percent, was land zoned for industrial use. Third place was business with 8 percent; this includes land zoned for office space, commercial centers and retail.

Maybe most surprising to someone whose view of the city comes from driving around on the major thoroughfares, multifamily housing made up only 7 percent of the land zoned for single uses. Because many apartments and townhome developments are on those main streets, it’s easy to get an incorrect impression of their prevalence.

The comparative dearth of mixed-use zoning reflects both history and custom. Charlotte’s first zoning ordinance in 1947 followed national trends (and federal government requirements), carving out separate areas for single-family, multifamily, business and industrial land uses. It wasn’t until the end of the 20th century that planners in Charlotte and elsewhere began putting more emphasis on encouraging mixed-use development, and some developers began attempting to build it. Even today, it’s not unusual for residents of single-family neighborhoods to fight proposals for mixed-use developments nearby, saying they will bring traffic congestion or change the character of the neighborhood.

For 2014, only 26 out of rezoning 121 petitions filed at the Charlotte-Mecklenburg Planning Department asked to rezone a property to a mixed-use zoning category. Additionally, for 2014, the planning department gave approval to develop 65 acres for mixed use—compared to 638 acres approved for multifamily and single-family developments.

The chart below shows the breakdown, by land area, for all the different zoning in Charlotte. Far and away the most prevalent use is single-family housing, at 61 percent.

The above chart shows the percentage, in land area, for each type of zoning  in the area under the direction of the Charlotte-Mecklenburg Planning Department. “Single-family” includes zoning for single-family and for manufactured homes. “Industrial” includes three categories of industrial zoning. Mixed-use includes mixed-use, uptown mixed use, and transit-oriented. “Business” includes business, commercial center, office, business distribution and business park zoning. “Multifamily” includes multifamily and urban residential.  “Other” includes institutional and research zoning districts.