Charlotte will ask voters for millions to fund transportation upgrades, but bonds won’t cover all needs 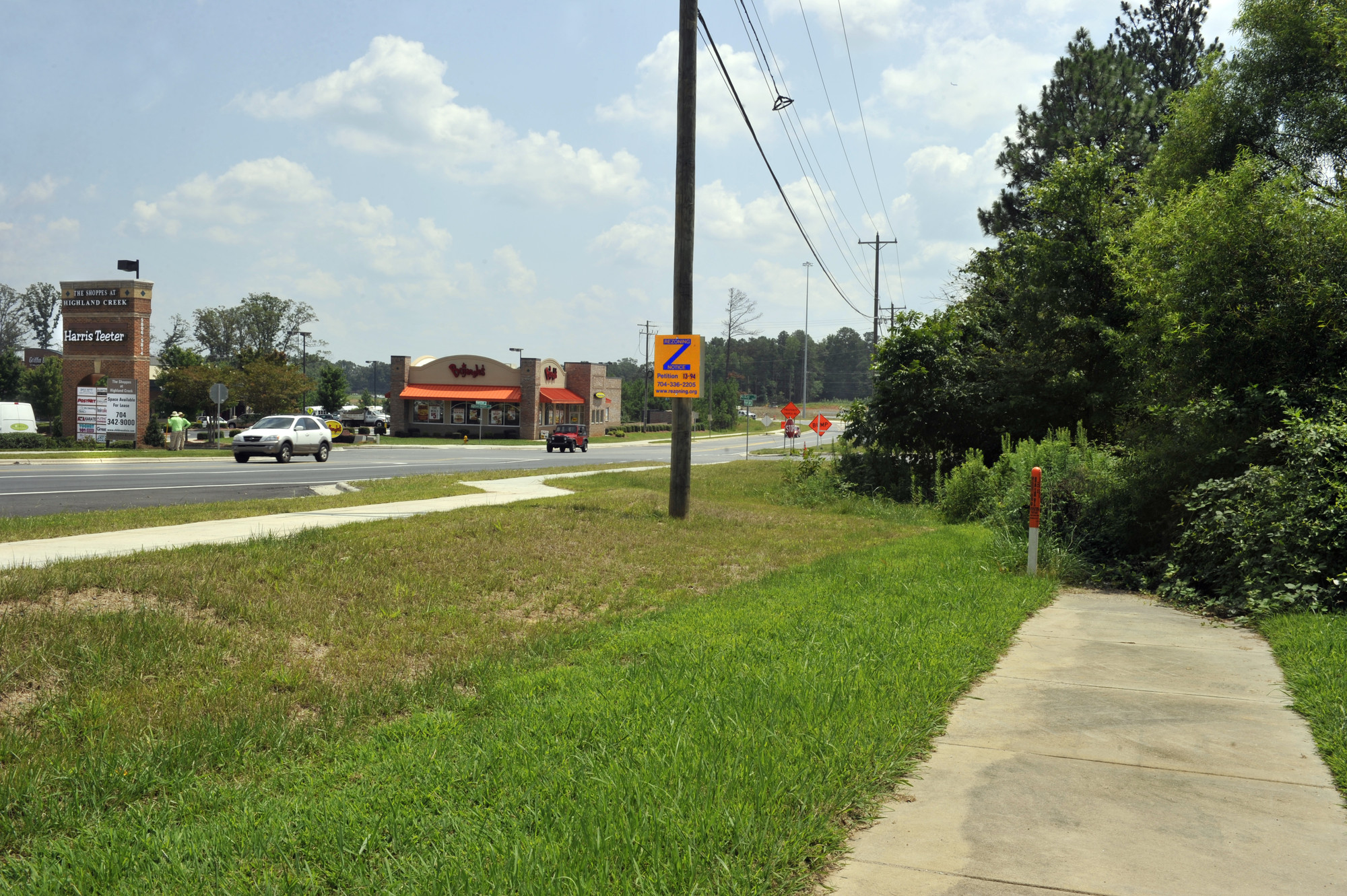 Charlotte is planning to ask voters this year to approve more than $100 million worth of new transportation bonds — an amount that would allow the city to make progress on goals like building more sidewalks but still fall short of covering many crucial needs.

Municipal bonds aren’t quite as sexy as a multibillion-dollar new light rail line or as captivating as a pitched political battle over a new sales tax, but they play a key role in the city’s growth. Voters typically approve bond packages every two years, allowing Charlotte to borrow money for major projects and ongoing programs such as subsidizing new affordable housing construction (in 2020, Charlotte’s three bond referenda won with more than 77% of the vote).

A draft proposal shows Charlotte is planning to ask voters to approve $198 million in general obligation bonds this year, about $118 million of which are for transportation projects. The city could choose to increase the total amount by up to $37 million, based on estimates of how much more Charlotte could afford to borrow.

City staff detailed their plans, and the size of the need, at a pair of meetings over the last week. The amount of available funding vs. the cost of needed projects reveals how far Charlotte still has to go in many areas.

Referring to a proposed sidewalk funding increase,  City Council at-large member Dimple Ajmera put it bluntly: “This $50 million investment is just a drop in the ocean, similar to what we're doing with affordable housing.”

Or, as council member Ed Driggs said: “The numbers are big…We’re facing some tough choices here.”

Here’s a breakdown of the city’s planned 2022 bond spending on transportation in several key areas:

Charlotte Department of Transportation Director Liz Babson told council members that the city is running into higher costs on everything from real estate acquisition to labor and materials as it builds out its network of sidewalks. New projects are running between $4 million and $8 million per mile.

“We've been able to complete some of the lower-cost, less impact projects,” said Babson. “We’re continuing to see those increases in cost because we're starting to construct some of the more complicated projects.”

“We’re coming into areas that are much more suburban…A sidewalk project in those areas is starting to cost in the range of almost a street construction project,” she said.

Charlotte currently has 11 miles of sidewalk projects underway. The increased bond funding will allow the city to finish those and move forward with its next five miles of prioritized projects, as well as bring some of the seven miles of projects currently being evaluated closer to reality.

But there are still 245 miles of thoroughfares identified in Charlotte that don’t have sidewalks (some don’t have any, while some have sidewalks on only one side of the street). Most of those are in the city’s newer, more sprawling and suburban areas, along roads and neighborhoods built up in the 1970s, 1980s and early 1990s, before Charlotte’s sidewalk requirements went into effect. Relatively few are in Charlotte’s wealthier southeast “wedge.” 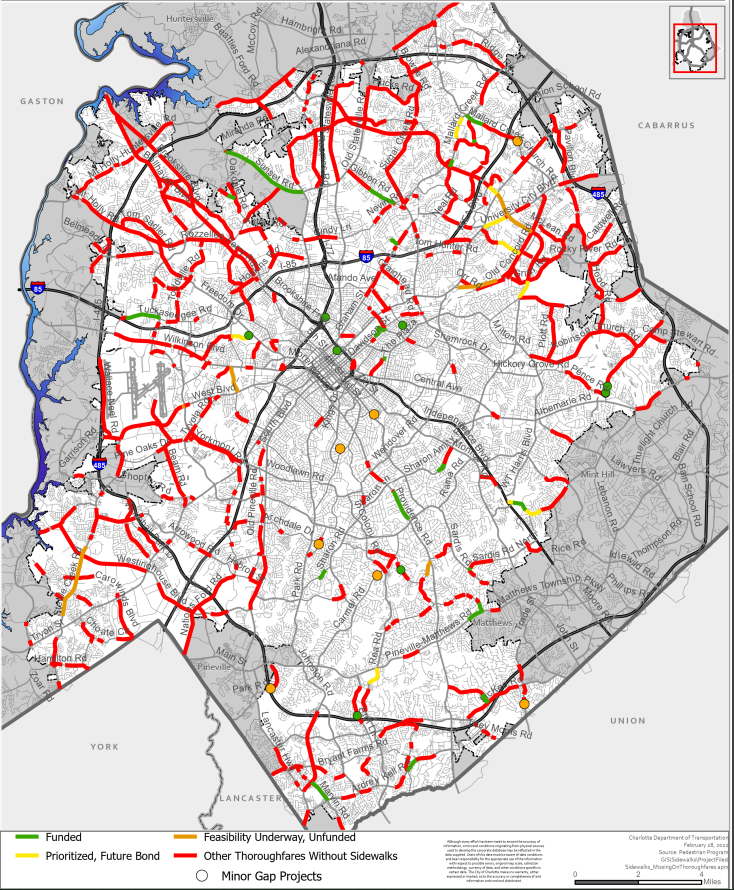 “This is kind of the reason why it’s a tale of two cities,” said council member Renee Johnson. “We talk about bridging the wealth gap and looking at things from a racial equity perspective. I think this is an area where we could make a really big impact…Areas are being left behind.”

Closing those gaps will be pricey: At the low end of the city’s cost estimate, building 245 miles of sidewalks would hypothetically cost almost $1 billion.

“We have a huge need, and our progress towards meeting that need is slow at this point,” said Driggs.

Charlotte’s bonds aren’t the only source of sidewalk funding. Developers also build sidewalks when they’re doing other projects, and the state builds some along roads it controls as well. The proposed $13.5 billion Charlotte Moves transit plan could also provide funding for sidewalks, if it moves forward (the plan relies on a 1-cent sales tax for Mecklenburg that currently has no clear path forward in the legislature).

Charlotte is also hoping to make it safer for people to cross the street. The city has installed 60 enhanced pedestrian crossings, with flashing beacons and other safety features. Another 35 are funded, and the additional sidewalk and pedestrian safety bond money will allow another 15 priority crossings.

There are an additional 47 identified locations that need enhanced pedestrian crossings in the city which aren’t funded.

Charlotte’s falling behind on its goal of ending traffic deaths by 2030 — in fact, it’s moving in the opposite direction. With traffic deaths rising, the city is looking to double its funding for the “Vision Zero” initiative — from $2 million to $4 million.

That money would go towards initiatives like neighborhood traffic calming projects, technology, (think those automated signs that tell you when you’re driving too fast) and improved street lighting. The money won’t go that far, however: Adding street lights costs roughly between $200,000 and $300,000 per mile, and Charlotte has 141 miles of thoroughfares without street lighting.

Currently, the city has 19 miles of street lights funded. The upcoming bonds would allow for building roughly another 15 miles. 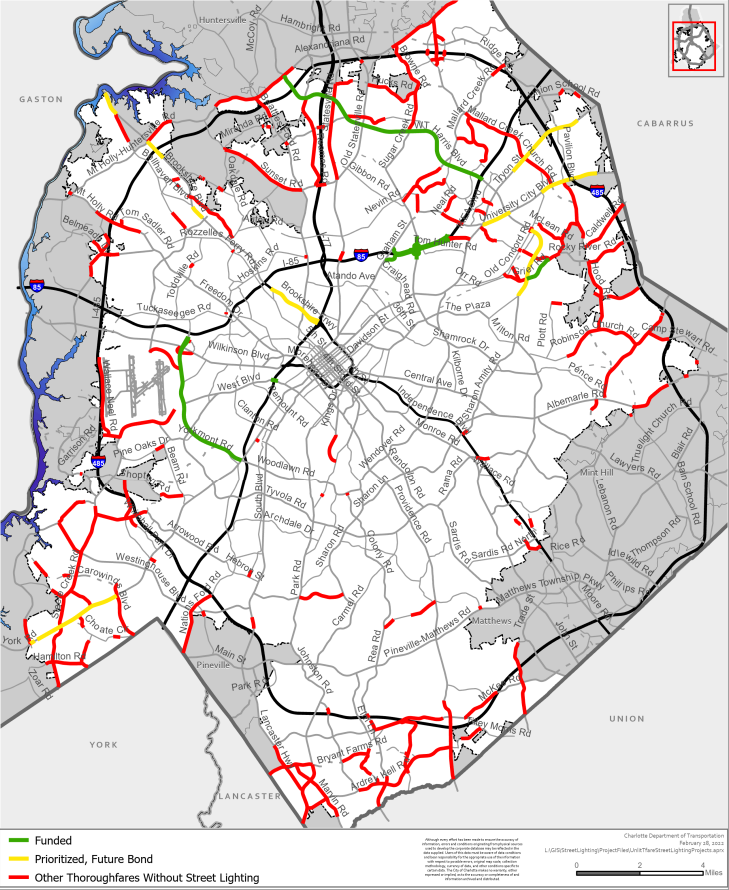 As with sidewalks, however, city bonds aren’t the only way to add street lights. Charlotte recently received a $1 million grant from the Charlotte Regional Transportation Planning Organization to install street lights on an eight-mile stretch of W.T. Harris Boulevard, from Mt. Holly Huntersville Road to I‐85.

It’s one of the most mundane municipal government functions: Fixing the potholes. But street resurfacing has actually become a big challenge in Charlotte, because the city’s street network is expanding while funding goes down.

“That's an element we've struggled with over the years, the growth,” said CDOT official Charlie Jones. The city maintains about 5,424 lane-miles of streets (one mile of two-lane road = two lane-miles), though the state maintains many major thoroughfares like W.T. Harris Boulevard and Providence Road.

Each year, the city adds about 30 lane-miles to its road network. At the same time, because of cuts in state funding allocations, the amount Charlotte has available for resurfacing shrank from $26 million in 2020 to $19.2 million last year. 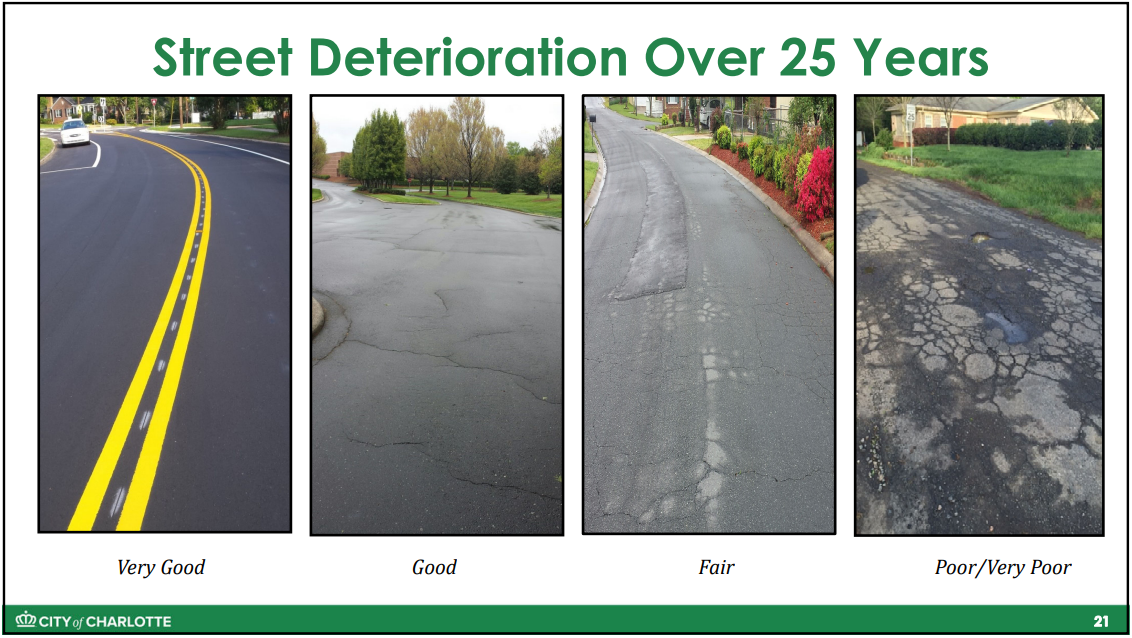 The 2022 bonds include $8 million for street resurfacing (the same as last bond cycle), but wouldn’t make up for the shortfall from the state. As a result, Charlotte’s street resurfacing cycle is about 35 years — even though the average lifespan of pavement is around 18 to 20 years.

As of now, about 62% of Charlotte streets are rated “good” or “very good,” Jones said. But if funding doesn’t keep up with rising needs, you could see a lot more potholes around Charlotte in the coming years.

“At some point, we have to be realistic and come to the realization that I don't know if we will be able to fund all of these projects in our lifetime,” he said, “or maybe in somebody else’s lifetime.”