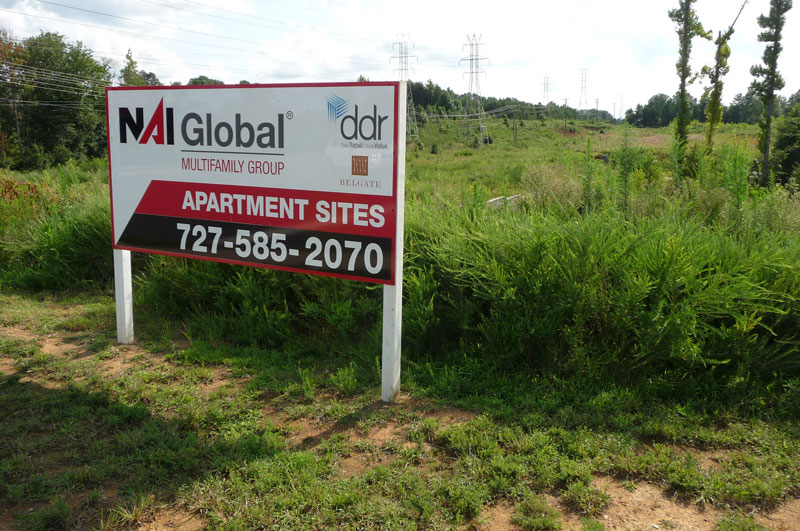 A University City-area rezoning petition quietly winding toward a public hearing Monday raises serious questions about whether the city can stand behind its plans for transit-friendly development along the proposed Blue Line Extension light rail line.

The case also highlights this fact: Today, almost all the properties in the station areas north of the NoDa neighborhood are zoned for uses and development patterns not in keeping with what should be near a light rail stop.

Will rezoning petition 2013-052  become just another example of a development request that trumps the public good in this developer-friendly city? Charlotte is a place where adopted plans and policies sometimes topple like dominos when the prospect of higher property tax returns or fancy developer renderings tempt the Charlotte City Council.

The site is 39 undeveloped acres within a comfortable quarter-mile walking and cycling distance from the planned University City Boulevard station. The site is zoned for multifamily housing, a transit-friendly use.

The agent, George Maloomian of Cambridge Properties, represents the Arden Group, a Winston-Salem real estate company. The developers want zoning to allow them to build an auto mall – a grouping of four proposed dealerships.

The problem is not necessarily the concept of an auto mall, but its location. An auto mall is the opposite of the sort of development that can best support light rail. Development near transit stops should encourage people to walk or bicycle; one of the whole points of transit is to get people out of their cars more often. A neighborhood that’s easy to walk in has a lot of housing, stores and workplaces nestled close together, preferably within a half-mile of the station. Big surface parking lots and far-apart buildings work against those aims.

Auto malls are basically a set of big-boxes sharing one site. The Hendrick Automotive Group opened an auto mall near Interstates 77 and 485 a year ago. Lexus, BMW and Mercedes-Benz dealerships sit amid their own parking domains. Hand-laid stone retaining walls, stainless steel handrails and large maple trees beautify the site. 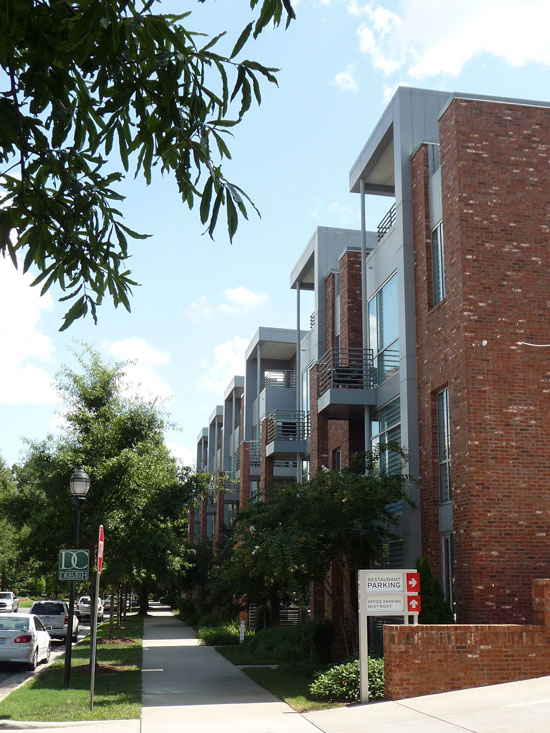 It’s not impossible for big box-type stores to be designed to fit into transit-friendly development. Charlotte’s South End has a good example. Southborough hides a Lowe’s big-box behind 69 multifamily units, two restaurants and a four-story office building. It's even farther from a nearby light rail stop than the proposed auto mall, And see photo at end for an auto dealership designed for an urban setting.

The case for the auto mall

The case in favor of the auto mall rests on three core propositions.

First, it keeps in Charlotte some auto dealers that might otherwise leave University City or hop to another county. Auto dealerships produce sales taxes, so that argument may resonate with City Council members. It’s championed by University City Partners, a nonprofit advocacy group for the area; Maloomian chairs its board but recused himself from the group's vote to support the rezoning.

Finally, Maloomian says an auto mall would make dense housing closer to the transit stop even more desirable. But why not build housing at both locations? After all, six years after the first section of the Blue Line opened, multifamily construction is booming in South End.

The city planning staff doesn’t back the rezoning; it withdrew support in July unless certain conditions are met. But planners are challenging only the auto mall’s design, not the use itself.  Planning Director Debra Campbell says the auto mall, which would also be near an I-85 interchange, would be consistent with the city’s adopted “Centers, Corridors and Wedges Growth Framework.”

Planners want to see the dealerships clustered, facades improved and no autos displayed at the IKEA Boulevard entrance. They want a street system that can more easily adapt to transit-friendly development at some future date, maybe 15 or 20 years off.

The case against the auto mall

The Blue Line Extension is a $1.2 billion project. Allowing development that isn’t transit-friendly at its UNC Charlotte-area stops could mean two decades of lost potential for stronger development. And not all real estate projects endure. If the auto mall failed, for how many years would it remain empty, an eyesore? The planners’ suggested design improvements, at heart, are little more than painting lipstick on the proverbial pig. No matter how well designed, a suburban-style, big-box auto mall is the wrong thing to build within easy walking distance of a transit station. 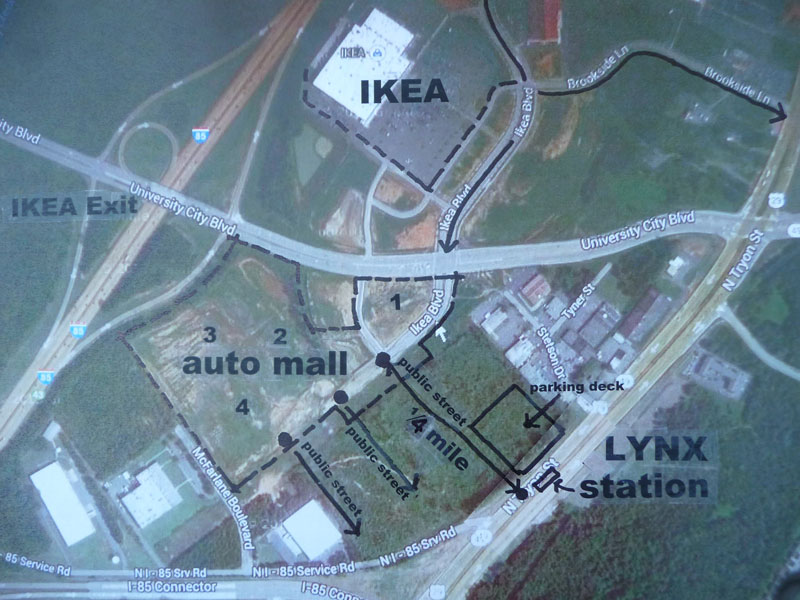 The plan that applies to the area today is the 2007 University City Area Plan, adopted before station sites were finalized, nor with a 2008 amendment. And despite what Maloomian and planning staff would like City Council members to believe, an auto mall is not consistent with that plan.

That six-year-old plan raises another vital issue: Area plans affecting the four stations nearest to 26,000-student UNC Charlotte have not been updated.

The staff plans a University City Boulevard station update in 2014. The council’s Transportation and Planning committee in May recommended all new BLE station area plans be consolidated and reviewed as a package. The question council members should ask is why the auto mall petition is even being considered until the station area plans for University City are updated.

And council members might ask, also, why so few of the properties all along the Blue Line Extension north of NoDa are zoned for transit-oriented development. One key undeveloped site right across North Tryon Street from the planned University City Boulevard station has been zoned since the 1980s to allow an auto dealership, among other things. If a dealer wanted to move there, the City Council couldn’t legally forbid it. Such a development would result in the loss, for decades, of the potential for tax-base-enriching, walkable, mixed-use development at that station. 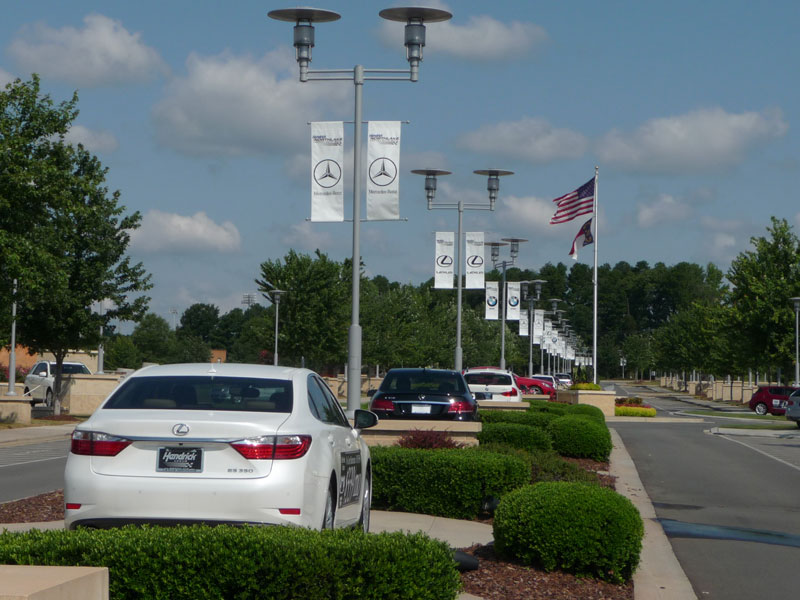 rezoning is linked to another rezoning petition for the current site of Parks Chevrolet at North Tryon Street and Tom Hunter Road, another station site about three-fourths of a mile from the auto mall site. If the auto mall rezoning passes, Parks would move there and its old site would be rezoned for transit-oriented development, according to a new rezoning petition being run by the planning staff but with Cambridge as agent. That TOD petition says it’s contingent on the auto mall rezoning. But why link the two? What precedent might that set for future negotiations with developers along the transit corridor?

The council must consider economic issues as it weighs pros and cons. Granted, developed sites produce more tax revenue than empty ones. But some new studies of property tax revenues challenge conventional wisdom that a big retail development is always the best economic choice. Asheville developer Joe Minicozzi has examined a growing number of local governments, including Matthews, and finds consistent results: Low-density uses like big-box stores compare unfavorably, on a per-acre basis, with compact development that mixes housing, stores and workplaces.

Much is at stake for the city. A $1.2 billion public infrastructure project, a decade of station area planning, and the future potential for true, transit-supportive development are all at issue. The council should take time to be deliberate. And it should consider asking planners to initiate rezonings to phase out, over coming decades, auto-dependent uses around BLE station areas.

It certainly should not vote to approve new ones. We should not let an ill-conceived development proposal set a precedent that could derail Charlotte’s future.

Martin Zimmerman is an architect and director of Green Mobility Planning Studio, USA, a firm that links public policy research, urban place-making and multimodal transportation solutions. He was the first director of facilities planning for UNC Charlotte (1992-2001) and executive director for the nonprofit Charlotte Area Bicycle Alliance (2003-2012).

Views expressed in commentary articles here do not necessarily represent the views of the UNC Charlotte Urban Institute or the University of North Carolina at Charlotte. 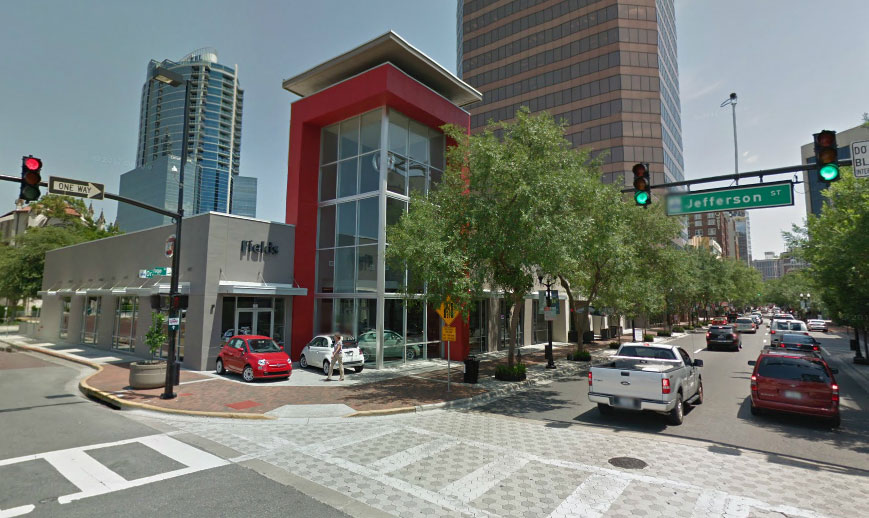