Forging connections across the Carolinas – one greenway, trail and waterway at a time 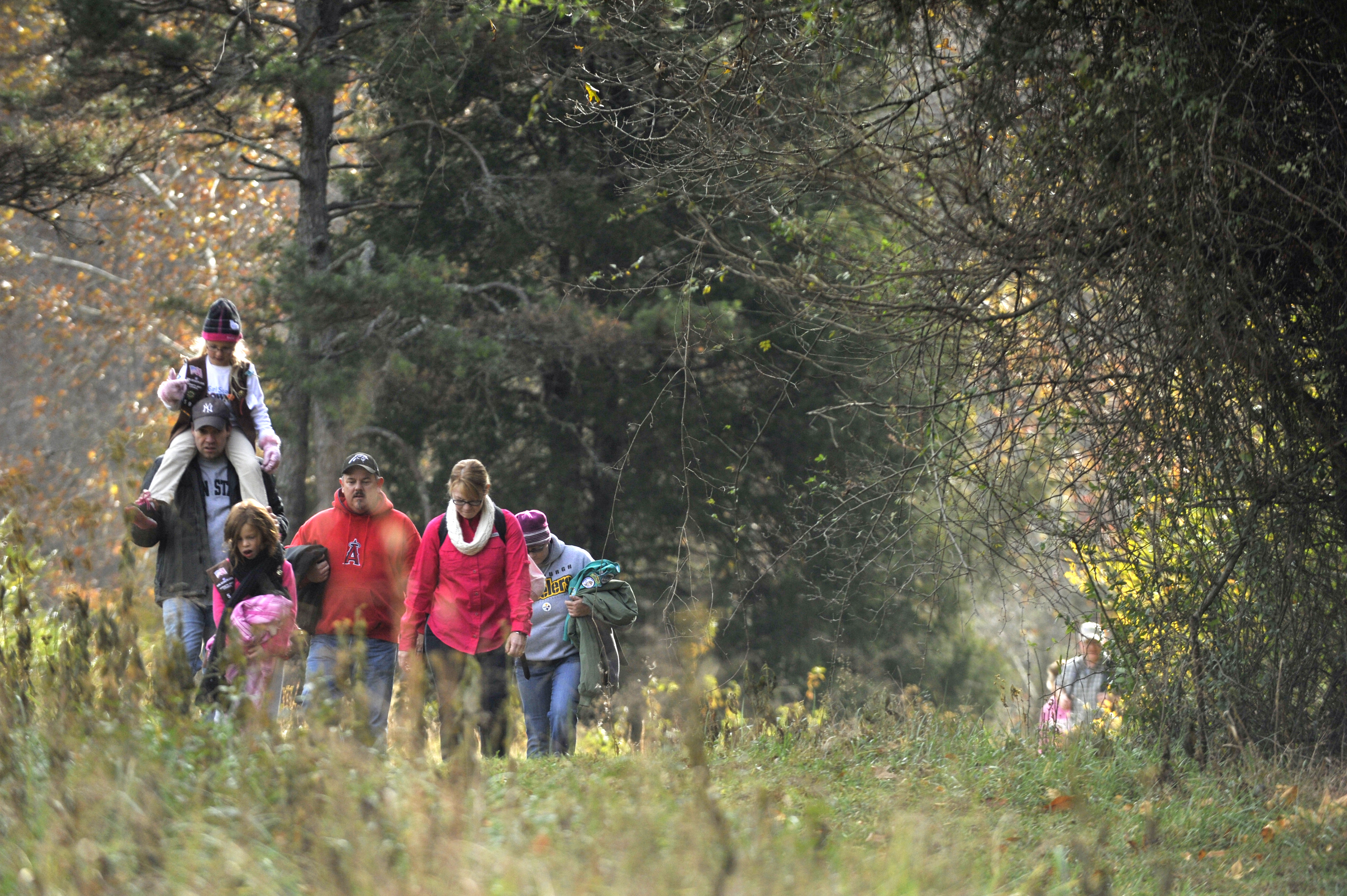 Nestled off a quiet street of attractive suburban homes in Waxhaw, there’s a quarter-mile trail in the woods along the Twelve Mile Creek.

Near the end of a stone stairway is a striking sight: A 160-foot suspension bridge connecting Waxhaw, North Carolina, and Indian Trail, South Carolina. You can embrace the bridge’s wobbles during the walk across and use them as an excuse to slow down and absorb the sounds of nature: the chirping birds, the soft padding of light rain on leaves, the trickling of the creek. Then, descend a set of wooden stairs and continue along the greenway for a few miles.

And take note of the pole at the trailhead: Carolina Thread Trail. What the bridge signifies – natural aesthetic appeal, a reason to leave your car behind, a walking and biking connection between communities in two states – highlights what organizers hope to deliver through the Thread Trail network of greenways, waterways and trails.

Launched in 2007 by lead agency Catawba Lands Conservancy and its philanthropic partner, Foundation For The Carolinas, the vision calls for the trail’s web of green spaces and waterways (called blueways) to link 15 counties in North and South Carolina.

The goal: enhance economic and social vitality by creating new, literal connections between places. It’s one of the most ambitious long-term efforts at creating new recreational resources to help local economies throughout the region, with 1,600 miles of trails planned.

“As we work with communities on trails, it’s really about connecting all these communities and places of interest all together,” said Bret Baronak, Carolina Thread Trail director. Using $6 million in grant support from Catawba Lands Conservancy, communities leveraged nearly $40 million from other grant sources, according to Baronak. “There’s a lot of momentum for trails in this area, and it’s very important over the next three to five years to keep that momentum going.”

Nearly 300 miles of foot trails are now open in the region. Organizers hope that as the system of natural routes expands, so will people’s use of alternative forms of transportation to get to places. Think of biking or walking to the Ruth G. Shaw Trail to the UNC Charlotte light rail station. Or kayaking to Tailrace Marina in Mount Holly and stopping at a lunch site downtown. Or stopping to shop and eat at Riverwalk following a day of recreation at Piedmont Medical Center Trail in Rock Hill.

But fulfilling this vision depends on the public’s continuing interest in outdoor recreation, boosting public awareness of the trail, and working collaboratively with private landowners to make more land available for the trail via donations or the sale of easments once public land runs out.

And, of course, money.

The Cross Charlotte Trail, a 31-mile stretch from Cabarrus County in the north to the South Carolina state line, faced a hurdle earlier this year when officials with the city of Charlotte learned a $77 million funding shortfall will delay the project years.

Still, advocates say there are plenty of water, foot and bicycle connections to keep people moving. Here’s a look at how the Carolina Thread Trail is inspiring development, recreation and more connections throughout our region:

The Masons Bend community sits in Fort Mill, S.C., on one side of Highway 21. On the other side of the highway, north along the river in Rock Hill, there’s the Riverwalk trail. There are retail shops at the trailhead, as well as The Pump House, a waterfront restaurant with views of the river.

At Masons Bend, the developers had an idea: Why not connect the two?

That was the genesis of the Masons Bend Trail, which developer Crescent Communities built to connect to the Riverwalk trail. Crescent’s trail portion links to another piece, Founders Trail, which connects to Riverwalk. Add it all up, and it’s about seven miles of continuous trails, crossing multiple jurisdictions and ultimately linking with the broader, 15-county Carolina Thread Trail network.

Creating a natural surface trail with views of the river gave the developer a chance to tell the story of the river’s connection with the community – and also create an amenity for residents and the community at large to enjoy. That’s according to James Martin, formerly with Crescent and now director of land development for DRB Group, which now owns Masons Bend.

Martin said rock mined from the river years ago, right where Mason Bend community now connects, was used to rebuild the dam in Lake Wylie following a flood in 1916.

“Any time you have a piece of property and you’re going to develop it, you look for a story behind it,” Martin said.

Creating the trail took private money. Investing $250,000 in the Masons Bend Trail paid for special touches, Martin said, including hiring a trail builder to create a clear path through the woods on the soft surface trail. Stone steps lead up from the river, so kayakers can pull over and get out. Visitors access the trail from parking areas near the trailhead.

“It’s absolutely a cost,” Martin said. “But we look at it as an investment in the community … It’s a nice amenity for the overall community, and not just the Masons Bend community.”

Waxhaw in Union County: Bridge as a calling card for visitors

It’s not hard to find the Twelve Mile Creek Greenway with its outstanding suspension bridge, thanks to signs installed by the Town of Waxhaw. You can access the trailhead via a gravel trail running through the MillBridge community – which connected its own private trails to the Carolina Thread Trail. The developer touts the connection in its marketing.

“We do mention it when we discuss the lifestyle,” said Kelley Archer, marketing manager at MillBridge. “It is a natural trail with a suspension bridge, so it is different than our paved walking trails.”

And Waxhaw businesses benefit from the Thread Trail partnership.

“The trail runs right through downtown Waxhaw’s shops and eateries,” said Dena Sabinske, Waxhaw Parks and Recreation Director. “We just had a Trails on Tap at one of the local businesses,” an event where the Carolina Thread Trail organization partners with a local brewery to promote the latest developments on the trail.

It’s a win for Baronak when towns and developers intentionally create green spaces and connections like these. There’s exponential potential in linking a natural network that has numerous access points and intersections. Building out these linkages could create a premier regional recreational draw — something like Virginia’s New River Trail and Virginia Creeper Trail, Baronak said, where people travel from miles around to bike and walk.

“Long distance is the game changer in my opinion,” Baronak said. “If you know you can ride 30 miles of greenway in Charlotte, that resonates with people.”

Imagine an outing that involves kayaking to a riverfront park, then walking or renting a bike for a short trip to a small downtown to check out restaurants and breweries.

You can do this in Gaston County, according to Michael Applegate, the county’s director of travel and tourism. With Gaston’s 13 municipalities along 11 miles of “blueway trails” on waterways, Applegate said the county wants to align with the Carolina Thread Trail as a key way to promote tourism and connectivity.

People spend money on gear for fishing or biking, kayaking or hiking -- then find they need more places to use their products.

“Come spend a weekend with us,” Applegate said, “and use your toys up here, too.”

Applegate said these towns’ heritage as former mill communities — powered by steam and water from the Catawba River and South Fork Catawba River during the Industrial Revolution — helped lay the groundwork for Gaston County’s recreational appeal today. Today, towns including Belmont, Mount Holly, Cramerton and McAdenville are branding themselves around the outdoor water sports experience.

Add the appeal of Crowders Mountain hiking to the west, and “it all screams outdoors,” Applegate said — and offers a chance to revive small towns that have suffered since the decline of the textile industry.

“As more and more trails are built up,” he predicted, “this trail will provide connectivity between recreation space and all these downtowns reinventing themselves around unique craft beverage or unique retail.”

Advocates see all this as a potential boost to nature-based tourism throughout the Carolinas, and beyond the counties adjacent to Charlotte and Mecklenburg. Because when it comes to adventure, who’s to say visitors to the Thread Trail couldn’t expand their exploration to enjoy an assortment of recreational opportunities in other areas, and on the public lands and parks we have nearby?

So outdoor enthusiasts exploring Stanly County’s Morrow Mountain State Park (which includes a portion of the thread trail) could continue the adventure by cycling along the rural roads, fishing in Lake Tillery or exploring the Pee Dee River by canoe. They could drive east for more exploration at Uwharrie National Forest. A more extensive trail network offers possibilities for roaming beyond the day trip, and that’s what people hope will generate more tourism dollars for areas.

Glinda Coleman would love to see this variety of adventurers coming to her area – and the economic revitalization that comes along with it. She heads Great Falls Home Town Association, a nonprofit focused on community and economic revitalization of the former textile mill town in Chester County, S.C., that sits along the Catawba River.

As part of Duke Energy’s management of the river, the utility is working to release more water and create whitewater rapids to draw paddlers. Canoe, kayak and flatwater paddling access areas are included in the plan to be completed by 2022, Coleman said.

To link it together, the town wants to convert a former CSX rail bed, which runs north along the Catawba to York County, into a trail. This would connect to the Rocky Creek Trail in Great Falls, a 1.6 mile stretch that’s already part of the Carolina Thread Trail. When Great Falls debuted this portion with a trail walk, Coleman said so many people signed up they had to divide the event into two days.

“I think the Thread Trail will be a big key of getting people to the area and bringing them in,” Coleman said. “Whether they like to walk or drive or whatever, there are ways for people to come in and enjoy the area.”