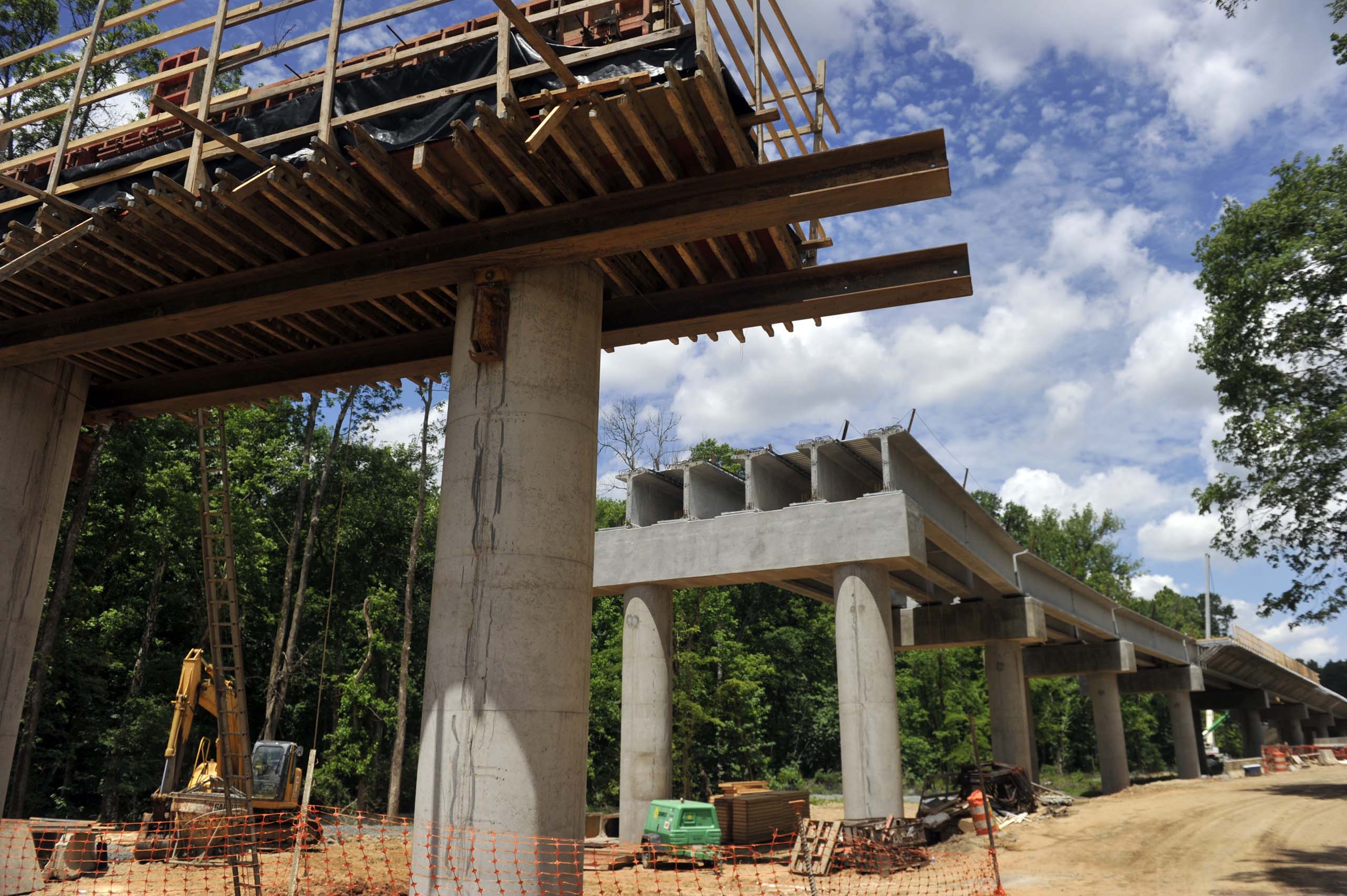 Charlotte voters could find the biggest ask in local history on their ballots next year: A $6 billion referendum to fund the local share of the city’s “transformational mobility network” with a new, one cent sales tax.

Charlotte Mayor Vi Lyles, the Charlotte Moves Task Force and other local leaders have signaled their support for such a measure in the fall of 2021. The referendum would pay for roughly half of the total cost, estimated at $12 billion over the coming decades. The local share — possibly supplemented by a property tax-backed bond — would need to be supplemented by state and federal funding.

“This is not hyperbole. It has the potential to shape our community for generations to come,” said former Charlotte Mayor Harvey Gantt, chair of the Charlotte Moves Task Force. “I think that we need to be bold.”

The task force recommended on Thursday that the city put a "One Cent for Mobility" tax increase on the ballot, which would raise about $6.6 billion over 30 years. That would require legislative approval from the General Assembly. This would be on top of the existing half-cent sales tax, and exclude groceries and medication to make it less regressive. 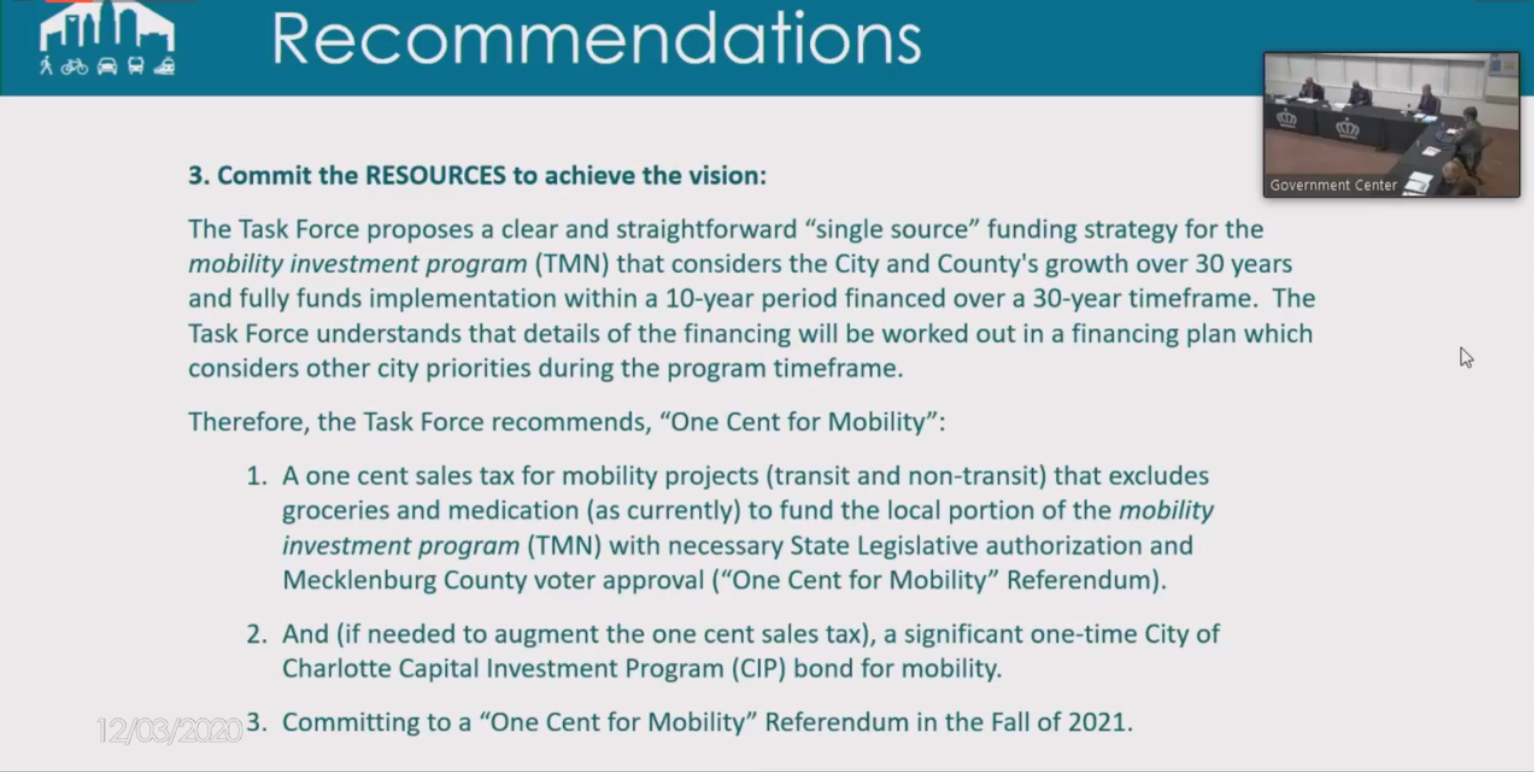 The move comes as Charlotte faces a growing population and increasing congestion. An estimated 385,000 people are projected to move to the city by 2040, and that doesn’t account for population growth in the surrounding region. At the same time, public transit has fallen on hard times during the coronavirus pandemic, with agencies nationwide grappling with major funding shortfalls and plummeting ridership.

Mayor hopes to have decision by end of January on moving ahead with transit tax referendum and next steps. Michael Marsicano of Foundation For The Carolinas asked her about campaign timing, citing failed arts tax referendum in 2019.

The next year will be crucial for the future of how we move around the Charlotte region. In addition to the city’s plans, which could extend light rail from Gaston County to Union County via the Silver Line, the first region-wide transit plan is underway by the Centralina Regional Council.

Here are four important things to keep in mind as our city gears up to consider the first significant transit tax increase in more than 20 years.

It’s not just about rail

Task force members have been clear that this isn't just about transit. In an auto-dependent city where a large majority of people get around by car, that could be key to winning approval (and ties in with messaging, discussed more below). Planners have emphasized that a rail network alone won't be sufficient to head off gridlock in the region, and stress providing people options to get around.

Although new projects like the east-west Silver Line light rail are likely to be both the costliest and most attention-grabbing parts of the city’s plan, the mobility network envisioned by planners includes:

The sheer scope of the plan led some task force members to worry that ballooning costs (a common occurence with large infrastructure projects) mean the sales tax alone won't be sufficient to cover it. But Gantt said the current projections don't account for Mecklenburg's growth.

“We're talking about $6 billion being raised on a one cent for mobility sales tax, and that $6 billion has not built in growth rates, which have historically been 3.5%,” said Gantt. “I think you will be more than sufficiently able to fund this across the county with a one-cent sales tax.”

The exact cost of individual projects, as well as what share of each new revenue stream would support each, aren’t yet known. To succeed, any plan from Charlotte would also need the state and federal governments to pick up the other half of the tab. That will require cooperation from the state legislature to allocate more funding for transit plans.

And, most importantly, the state legislature would have to agree to let Mecklenburg put a tax increase on the ballot for voters to decide. That's by no means assured.

If the legislature balks at putting a full cent tax increase on the ballot, transit backers could pursue a smaller amount.

“If it's not something we get full support on for one cent, maybe it's three-quarters of a cent, or a half-cent,” said Stephen Stansbery, vice president of consultant Kimley-Horn, who has been working on the plan.

Messaging will be key

After Mecklenburg County failed to win approval from voters for a quarter-cent sales tax to support the arts in 2019, organizers are especially cognizant of the need to gather public support for any referendum. The Charlotte Moves Task Force, chaired by former Mayor Harvey Gantt, has noted as much in its meetings.

"One Cent for Mobility" is a straightforward, single-source of funding, task force members said. They had previously considered a combination of local sales tax, property tax and fees to raise the local share share of funding, a more complicated arrangement, and potentially a harder sell.

“Plainly stated, it's a lot easier to get approval for one funding stream than multiple funding streams,” said Stansbery. “If we were to get support for that, it has the ability to cover our local portion.”

“There seems to be more inclination of residents towards a sales tax,” he said.

Along with the simplicity of a one cent sales tax, backers are likely to emphasize that its benefits will extend beyond transit. The Charlotte Moves Task Force discussed emphasizing that the plan will help with multiple aspects of mobility, including economic mobility, as well as keeping Charlotte economically competitive with other peer cities and helping protect the environment.

Other communities have been successful, but some referendums have failed

But there have been plenty of cautionary tales recently as well. A referendum in Gwinnett County, Ga., failed by a narrow margin this year, as voters again rejected the idea of extending Atlanta's regional transit system to their county. And in 2018, Nashville's much-hyped transit plan failed by a nearly 2-to-1 margin at the polls.

Even among those cities that saw success, Charlotte might not be an apples-to-apples comparison. Jaiyeoba emphasized that Austin's efforts were based around property taxes, for example.

So, while there are successes to note, look to Charlotte leaders to draw lessons from peer city's failures as well.