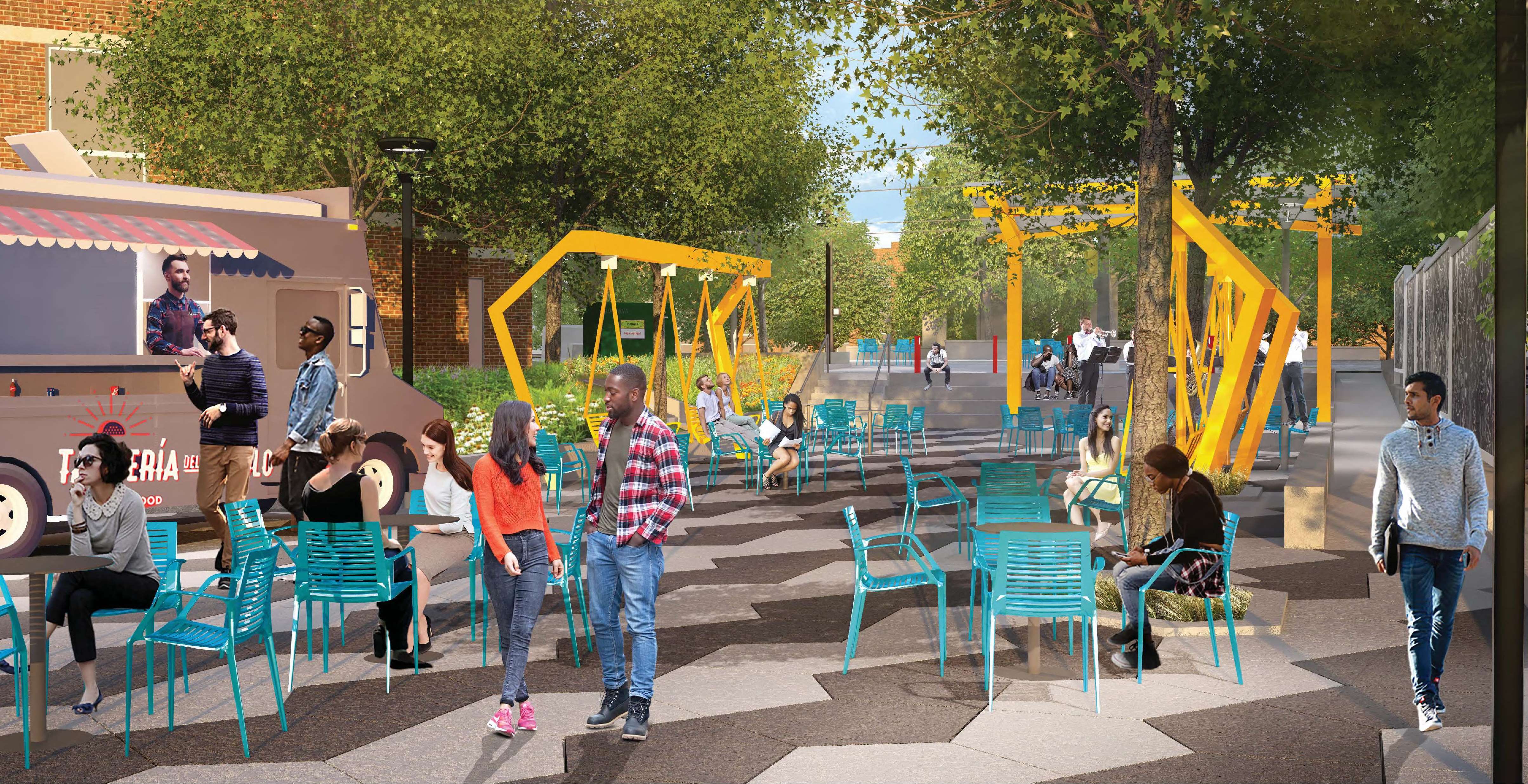 Sitting in a gas station turned into a café and coffee shop along Rozzelles Ferry Road in Charlotte’s Historic West End, J’Tanya Adams, a longtime community activist, spotted a commercial real estate broker who has been working with developers interested in building new homes in the area.

The conversation was brief, but packed with news. Adams is founder and program director of  Historic West End Partners, a non-profit which largely promotes economic growth and revitalization. She swapped information with Forde Britt about a potential dog grooming shop and other businesses for several nearby empty buildings along the  street.

Such interactions are happening more often in the Historic West End as the historically African American community on the outskirts of uptown Charlotte braces for an anticipated spike in growth and development. A wave of gentrification began moving through some of the neighborhoods nearly a decade ago as newcomers, attracted by the area’s history, character and short work commutes, began buying older homes and renovating them.

The changes have triggered both optimism and angst about the potential impact on the community. There are concerns about displacement of residents, loss of affordable housing and a weakening of the area’s cultural and historical identity. But most are excited about the possibilities.

“We’re truly almost at lift-off,” said Adams, who founded Historic West End Partners nearly 11 years ago. “You know how it is when a plane is getting ready to taxi. Everything is queued up and ready to go. It’s just like that.”

The Historic West End, as defined by residents, stretches about eight miles from West Trade Street and I-277 to near Sunset Road. It is home to some of the city’s oldest African American neighborhoods, with some of its residents serving as civil rights activists and other community leaders. The Five Points area, less than a mile from Uptown and anchored by Johnson C. Smith University, is currently at the epicenter of new development.

Residents of the Historic West End have been pushing for more city investment for several decades. In recent years officials have launched capital projects and developed growth plans to encourage increased development. Several major city projects are nearing completion, and are considered a major catalyst for future private investment:

A two-mile extension of the CityLynx Gold Line streetcar from Uptown along Trade Street and Beatties Ford Road to Johnson C. Smith University will open next year, providing a stronger link between utown businesses, residents and other Charlotte neighborhoods. It will cost more than $100 million in city and federal funds.

A $5.5-million Five Points Plaza at the intersection of Beatties Ford Road and West Fifth Street, across from the university, is scheduled to open later this year. The Knight Foundation has awarded a three-year $394,500 grant to facilitate resident involvement in shaping cultural, educational and entertainment programming events. About $20 million of city money will be spent for the plaza, other nearby roads projects and infrastructure.

There are other large capital projects along the corridor: the planned renovation of the historic Excelsior Club into an entertainment complex that could include a restaurant, hotel and music hall as well as sidewalk construction and roadwork in the Beatties Ford Road/Sunset Road area. Both the city and county have  contributed to the project.

“This is a pivotal time in the West End,” said Charles Thomas, Charlotte program director of the Knight Foundation. Since 2015, the nonprofit has invested more than $5 million in various Historic West End initiatives primarily targeted at helping residents participate in and help guide their transforming neighborhoods. “The next three to five years are going to see some major changes.  Our objective is to be supportive of practices that help people stay in place and leverage the change.”

Community and nonprofit organizations have mobilized to combat some of the challenges created by gentrification in the area. The nonprofit Westside Community Land Trust is purchasing land for affordable housing and has relocated a house to a vacant lot on Tuckaseegee Road. The nonprofit For the Struggle is battling predatory investors who are harassing property owners and seeking to buy homes below market values. A group of neighborhood leaders known as AirKeepers is working with Clean Air Carolina to monitor and improve air quality in the area, which has a high concentration of industrial uses. The Historic West End Partners are working on starting a food co-op.

Promoting collaboration between residents, developers, businesses and the city has become a priority in the Historic West End. The lessons learned, said Cherie Grant, assistant to the city manager, will be used in other neighborhoods across the city. “We’re realizing that even with public investment if you don’t have residents and organizations involved it stalls the revitalization.”

Charlotte City Center Partners, an economic development group which promotes uptown and the nearby South End, has been heavily involved in helping develop growth strategies as well as a brand and identity for the area.

He added, “We will showcase the westside to people who are interested. Once the streetcar construction is finished, things will pick up.”

At the intersection of Beatties Ford Road and Rozzelles Ferry Road, renovations ares underway on a small shopping center across from the Five Points Plaza and Johnson C. Smith University. So far a pizza shop, an ice cream store and a pharmacy have signed letters of intent to occupy space.

“We are able to be a part of some amazing things” said Dianna Ward, a partner with Sankofa Partners, which purchased the center, and owner of a Segway and bike tour company operating in Charlotte and three other cities. “We have people going in who share our vision to enhance the community and make it a destination.”

Ward, who lives in the Historic West End, said the still unnamed center is her first involvement in real estate development. “I think it will be an example of how you fit the new neighbors with the old neighbors and have all the needs met.”
Britt, a commercial real estate broker whose clients include a developer planning more than 130 townhouses on Rozzelles Ferry Road, said that as a 13-year resident he doesn’t want the qualities that attracted him to the community to be destroyed.

“I hope that it will continue to have a strong social fabric that is welcoming to all people,” said Britt. “You can’t control that but you hope that people who come in want to be a part of that.”

Along with capital projects, the city is involved in several other initiatives to promote revitalization in the Historic West End.

A citywide Aging in Place program provides grants to senior citizens for home repairs that allow them to remain in their homes. An 18-month-old pilot project called UrbanMain is a collaborative effort with a national program to provide a structure for business owners and residents to come together to develop strategies.

“We’re encouraged by the amount of momentum that has been built up,” said Erin Gillespie, corridor revitalization coordinator in the city’s economic development department. “We are continuing to work and may use this as a model for other corridors across the city.”

As work continues on the streetcar line and other projects, Adams is talking to as many people as she can about the potential in the Historic West End.

“I think the biggest challenge is the implicit biases and assumptions about the area,” said Adams. “I think there is so much more opportunity than people see.”