How to Appreciate a Brown-Eyed Susan 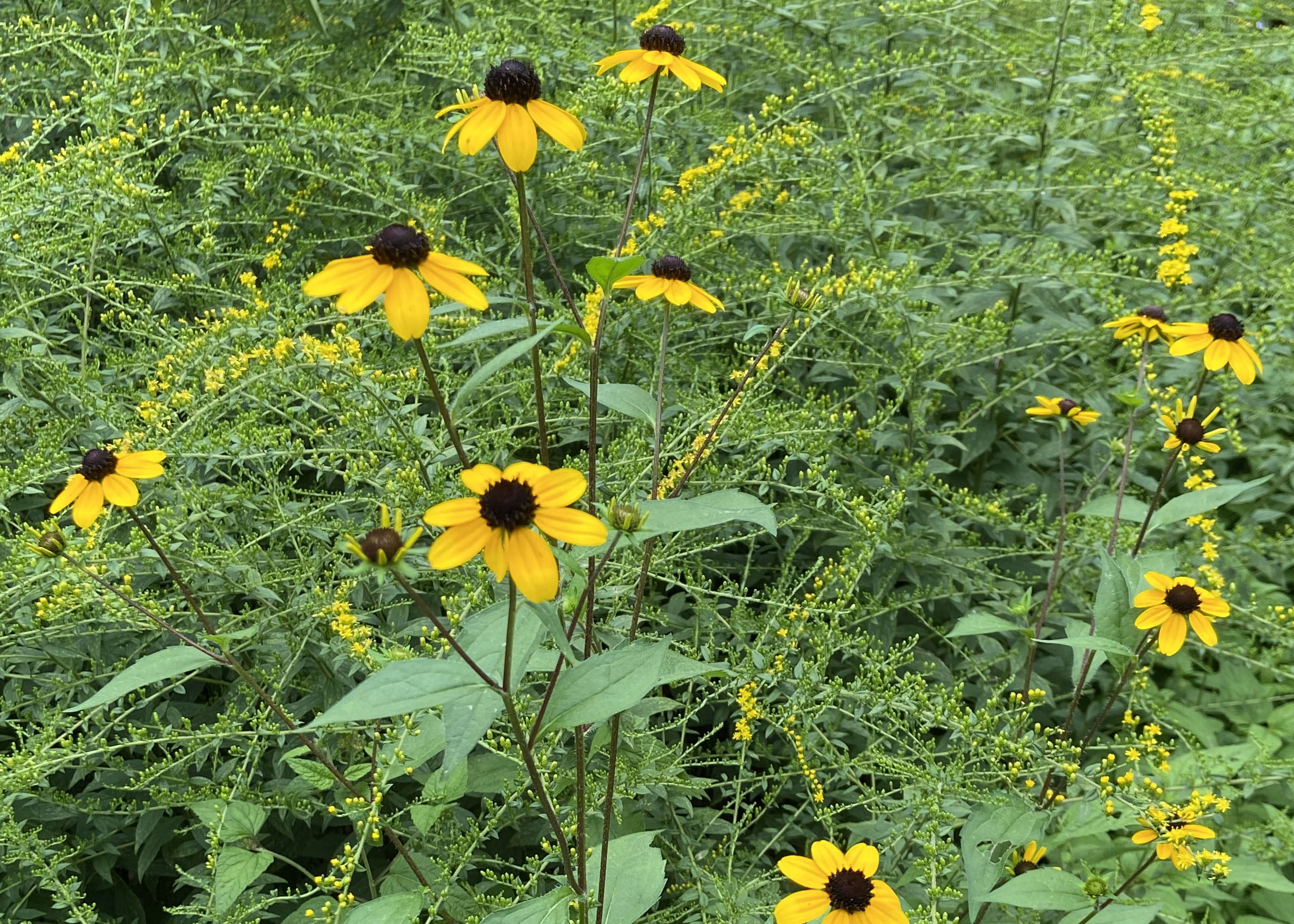 I wasn’t especially fond of brown-eyed Susans (Rudbeckia triloba). They strike me as having a superficial and relentless cheer – like a clerk who automatically chirps Have a great day! when you’re clearly miserable.

But they freely seed around our yard in the Uwharries, and my garden in Charlotte was bare, so I transplanted several clumps. They pop up in unexpected places, but the rabbits keep them in check, chewing many clumps to a nub. They bloom earnestly all summer, their brassy petals somehow at odds with the season, clashing with the cooler tones of other flowers – the cutleaf coneflower’s sunny yellow and the clear lavender of the obedient plant.

This spring, a gangly plant established itself at the edge of my path to the compost bin. I knew it was destined to become a problem. Sure enough, after a heavy rain, it started to flop. My first instinct was to cut it back – or rip it out entirely – but something gave me pause. It’s been a particularly bleak year for butterflies in my yard, a report I’ve heard from native plant gardeners across the Piedmont. What if it served as an important source of nectar? Or maybe pollen for the bees? I had so thoroughly dismissed the humble brown-eyed Susan, I’d never paid any attention to which species might be using it.

For the next couple weeks, I made a point to stop by maybe a half-dozen times per day, any time I let the dogs out or took a load of vegetable scraps to the compost bin. This was not a rigorous scientific survey. I simply paused for a few minutes to see what caught my eye. 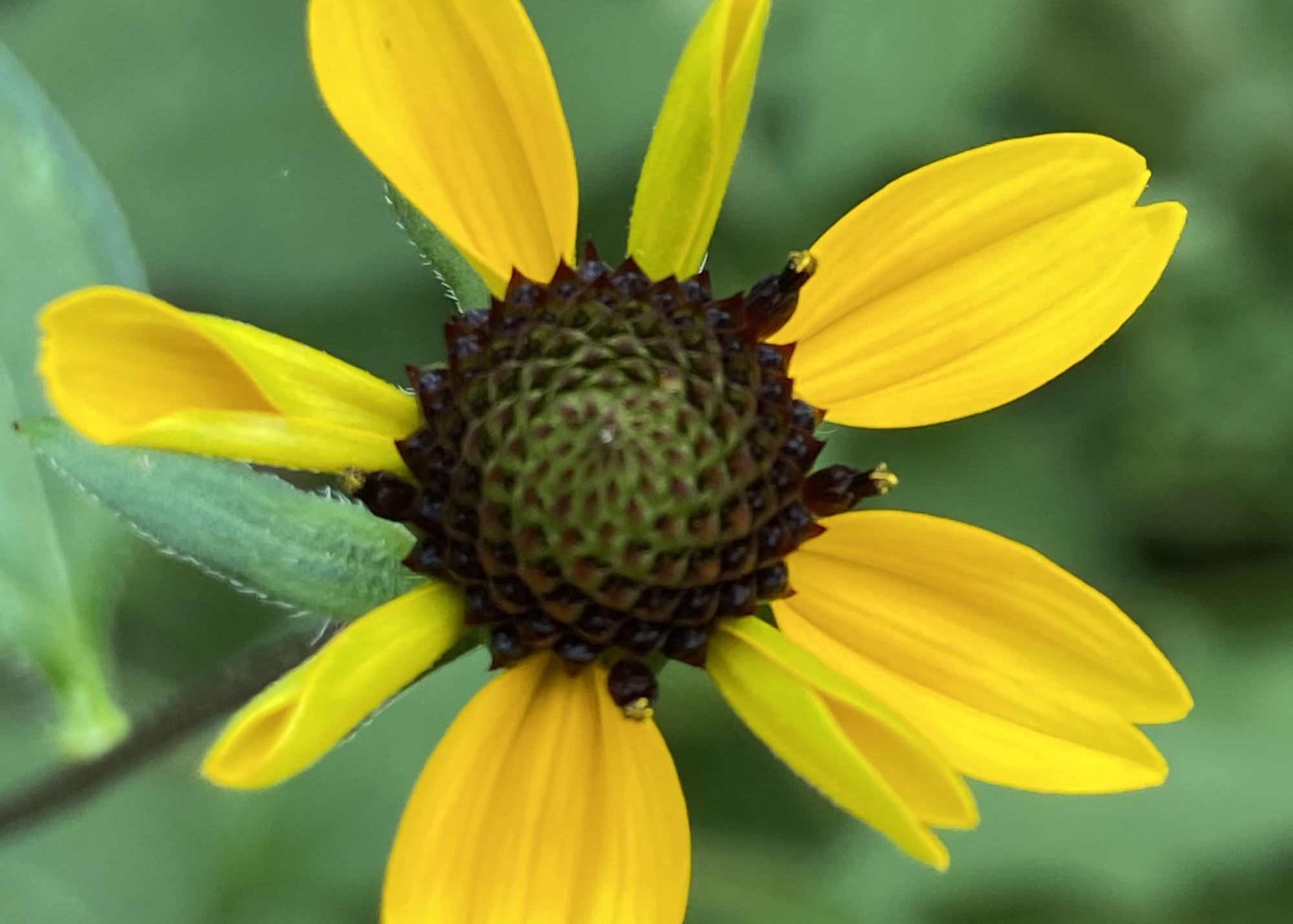 My observations got off to an auspicious start – there was a large, immobile wasp with a waist so long and thin it appeared to be part of the stem. Those traits made it easy to identify as the common thread-waisted wasp. I was hooked. Soon, another wasp appeared, the dramatically colored blue-wing scoliid wasp. There was a fly that looked like a bee – the transverse banded flower fly – and bees of every shape and size. Bumblebees, leaf-cutter bees and tiny metallic sweat bees. A long-horned bee with so much pollen on its legs, I wondered how it was able to fly. They didn’t seem to mind me getting close and snapping dozens of pictures. Here’s a lesson I learned – no bee is going to sting you when it’s sitting on a motherload of pollen.

I became obsessed with uploading photos to iNaturalist, an indispensable aide to help with identification. There were leafhoppers and sharpshooters with groovy color combinations – robin’s egg blue with red bands or golden stripes. There were tiny speckled moths, one with the fanciful name of elegant grass-veneer. There was the sunflower seed maggot, which is much more beautiful than its name suggests. And those with names so descriptive, they seem like literal translations from German – the goldenrod crab spider, the redheaded bush cricket, and the tarnished plant bug.

To my great disappointment, I documented only two butterflies – the fiery skipper and the understated Horace’s duskywing, both of which visit many other flowers in my yard. Reliable sources claim brown-eyed Susans are a coveted source of nectar, but I didn’t notice a clear preference for them. Pollen seemed to be the bigger draw in my garden.

For the first time, I found myself enchanted with the flower itself. I never realized the petals unfurl from little tubes or that in the right light, at the right angle, the dull brown centers turn a regal purple, sometimes crowned with a ring of yellow pollen. When the nearby goldenrod started blooming, the brown-eyed Susans finally seemed at home in the landscape. Or maybe I had finally fully embraced them.