Mapping ‘Latino’ in the Charlotte region 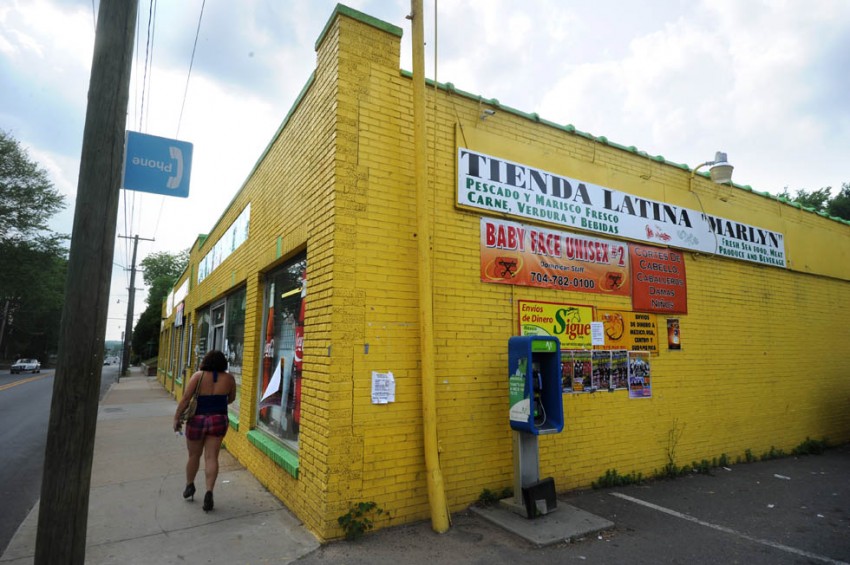 The term “Latino,” like “Hispanic,” covers many different countries and cultures. With the opening last month of the exhibit  “¡NUEVOlution!: Latinos and the New South,” at Charlotte’s Levine Museum of the New South, and with National Hispanic Heritage Month taking place in the first part of October, the UNC Charlotte Urban Institute looked  at the Charlotte region’s foreign-born Latino immigrants.

Using the 2013 5-year American Community Survey information, we mapped where in the region foreign-born immigrants from different Caribbean, Central and South American countries were living. Some patterns emerged that might surprise many people.

For instance, although Mecklenburg County, because of its size, has the highest numbers of foreign-born immigrants from Mexico (26,458), among the 14 counties in the Charlotte region those with the highest rates of Mexican-born residents per 1,000 population are Union (38 per 1,000), Cabarrus (34.8) and Catawba (30.7) counties, compared to 27. 9 per 1,000 people for Mecklenburg.

The American Community Survey collects data on foreign-born populations throughout the United States. Using that information for the 14-county area around Charlotte, we created an expandable “tree map” to help illustrate where Latino residents from different backgrounds are living. Click on the image to see the interactive map.

Mapping ‘Latino’ in the Charlotte region

(click on static image below to go to interactive “tree map”) 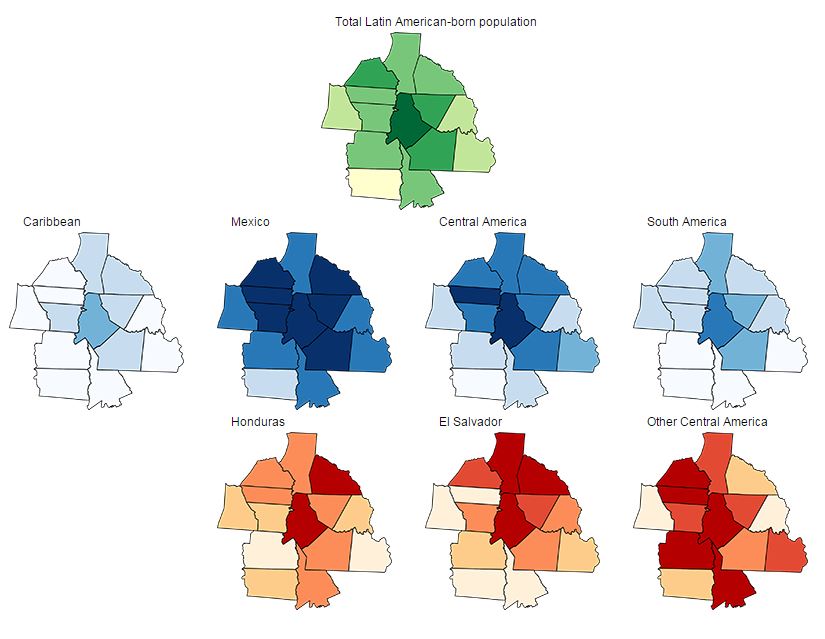 To use the tree map, start with the green map of the whole region. Different shades of green show the different concentrations of foreign-born Latino residents in each of the 14 counties.

Click on the green map and it splits into four blue maps of Spanish-speaking regions. Again, the different shades of blue show different population concentrations.

Click on three of the four blue maps and a set of orange maps appears, showing the population concentrations from specific countries in each of the three regions.  They show, for example, that Mecklenburg, Rowan and Iredell counties have the highest concentrations of residents from El Salvador.

(Why is Mexico a separate map? Such a high preponderance of foreign-born Latino residents in the region are from Mexico that including Mexico with other countries in the maps would throw off the color scale.)

As the maps help illustrate, the term “Latino” – generally understood to refer to countries in Latin America – applies to people from many different countries. The countries may share a common language (Spanish generally, although the language of the Latin American nation of Brazil is Portuguese) but have different histories, culture and traditions.

The term “Hispanic” is generally understood to mean from a Spanish-speaking country and thus includes Spain as well as Spanish-speaking Latin American countries. This 2009 report from the Pew Research Center explains more about Hispanic vs. Latino and how the Census Bureau defines the terms.