Milkweed for monarchs? The answer isn’t so simple 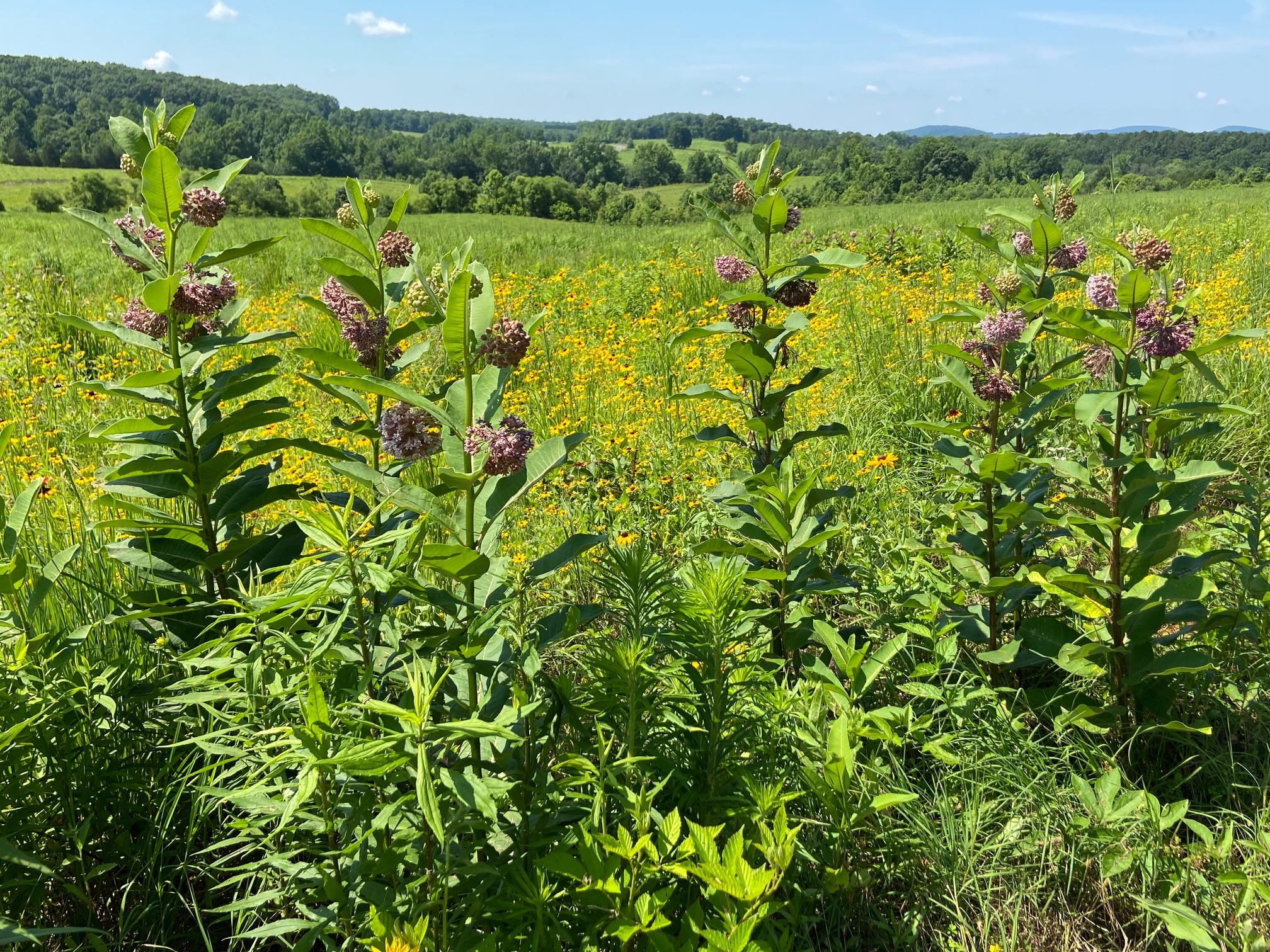 The message seems to be getting out — monarchs need milkweed. The charismatic orange and black butterflies seek nectar on a wide variety of flowers, but their caterpillars feed on no other plant. And that appears to be where the clarity ends. Even after planting and managing for several of the 16 milkweed species native to North Carolina, I was still perplexed by the monarch’s preferences and behaviors.

In the Uwharries, our grasslands are riddled with common milkweed (Asclepias syriaca), sometimes in extensive stands. Monarchs trickle into the region a few weeks before it begins to bloom in May. This seems like a recipe for success, but as the season progresses we don’t find as many caterpillars or damaged leaves as we might hope or expect. And yet, fresh adults are common in fall, generally well into October.

A few monarchs also drift through my Charlotte garden in spring. Common milkweed is a bit too aggressive for a small yard, but I do grow orange butterfly weed (Asclepias tuberosa), which also starts blooming in May. For some reason, the monarchs rarely use it.  In fact, they disappear for much of the summer. I generally don’t see them again until August.

At that point, they start showing up in greater numbers. They ignore the tattered butterfly weed entirely and flock to my swamp milkweed (Asclepias incarnata) which is in full bloom and, aside from the aphids, still relatively fresh. By mid-October, caterpillars have usually devoured every leaf. 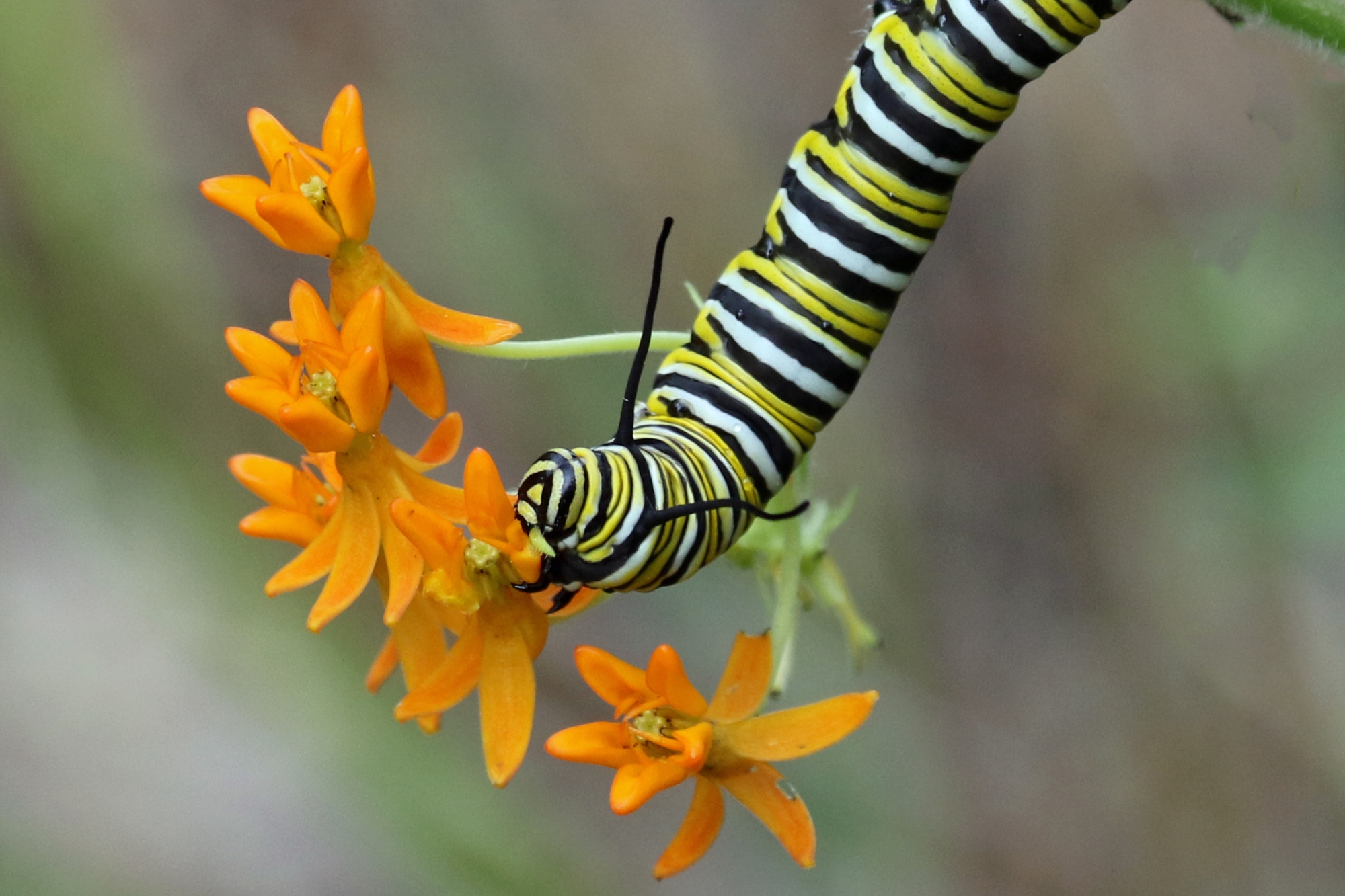 But I didn’t understand why the monarchs don’t seem to take full advantage of the habitat I provide in Charlotte or the Uwharries. Is the overall population simply too diminished? Scientists with the International Union for Conservation of Nature recently designated the monarch as endangered. Are we too far from their migratory path? Do they prefer other species of milkweed? Is climate change a factor? For answers, I reached out to Monarch Watch (Monarch Watch) and was fortunate to have a wide-ranging discussion with their founder and director, Orley “Chip” Taylor.

Trained as an insect ecologist, Taylor was able to shed some scientific light on my casual observations. While orange butterfly weed is a great nectar plant, it isn’t a high priority for monarch caterpillars. The protein content is too low and the leaves are too hairy. Monarchs sometimes accept it when the plants are young and tender or when they don’t have better options.

Taylor wasn’t surprised that monarchs are scarce during our Piedmont summers – their reproductive capacity and longevity decrease when temperatures rise above 90 degrees. No wonder so many head north! The ones arriving in my garden in August are part of a poorly understood early migration. They’ve been born in the North, but “they’re gambling they’ll do better down South,” Taylor said. Meaning they’ll find a better selection of host and nectar plants deeper into the season, giving them a longer period to reproduce.

In August, swamp milkweed is still in its prime, but common milkweed and orange butterfly weed have grown old and tough. Taylor said their senescence changes the leaves’ chemical composition, making them less appealing to monarchs. What a cruel twist of fate!  Taylor offered an elegantly simple intervention – cut or mow those species in early summer to promote new growth.  That’s how he manages his own land in Kansas. Studies conducted in Canada have demonstrated the effectiveness of this strategy.

While Taylor clarified many aspects of monarch behavior, he actually clouded a topic I thought I understood. Some scientists have suggested that tropical milkweed (Asclepias curassivica) is actually detrimental to monarchs. This has been widely reported in reputable mainstream media in recent years. Native to Central America, this species has a long season in the Piedmont, boasting showy flowers in shades of yellow, orange and red.

Because it can persist and bloom out of sync with the monarch’s migration pattern, there’s concern this might cause them to linger in an area too long or prompt them to reproduce at a time when their energy ought to be reserved for flight. In areas where the plants remain evergreen (Zone 9B and south), they can harbor higher levels of Ophryocystis elektroscirrha, a parasite that sickens caterpillars as they eat the leaves, causing deformities in the adults.

[More nature: Try the ‘bucket of doom’ to eliminate mosquitoes without harmful pesticides]

Taylor thinks the jury is still out on tropical milkweed and that further research is needed.  Regardless, he still advises people to plant native milkweeds instead. This begs the question – do monarchs prefer certain species?  The answer appears to be yes. According to a study conducted in Iowa, common milkweed and swamp milkweed excel in terms of eggs laid and larval survival.

Gabriela Garrison, a biologist with the N.C. Wildlife Resources Commission, noted that people used to plant tropical milkweed because our native species weren’t widely available.  Fortunately, that has changed in recent years. Earlier this summer, I assessed the offerings at a handful of independent nurseries and big box garden centers. I didn’t find a single tropical milkweed.

Even better, I found new varieties of swamp milkweed. Intrigued by the white-blooming ‘Milkmaid’ – and wondering if the flowers were a cool or creamy shade – I pulled out my phone and did a quick search for more information.  On multiple websites, this variety of our native Asclepias incarnata was listed as – wait for it – tropical milkweed. Cue the facepalm emoji.

In some quarters, the clarity around milkweeds apparently remains elusive, but I added ‘Milkmaid’ to my garden with confidence. It isn’t blooming yet, but we’re both ready for the monarchs’ return.