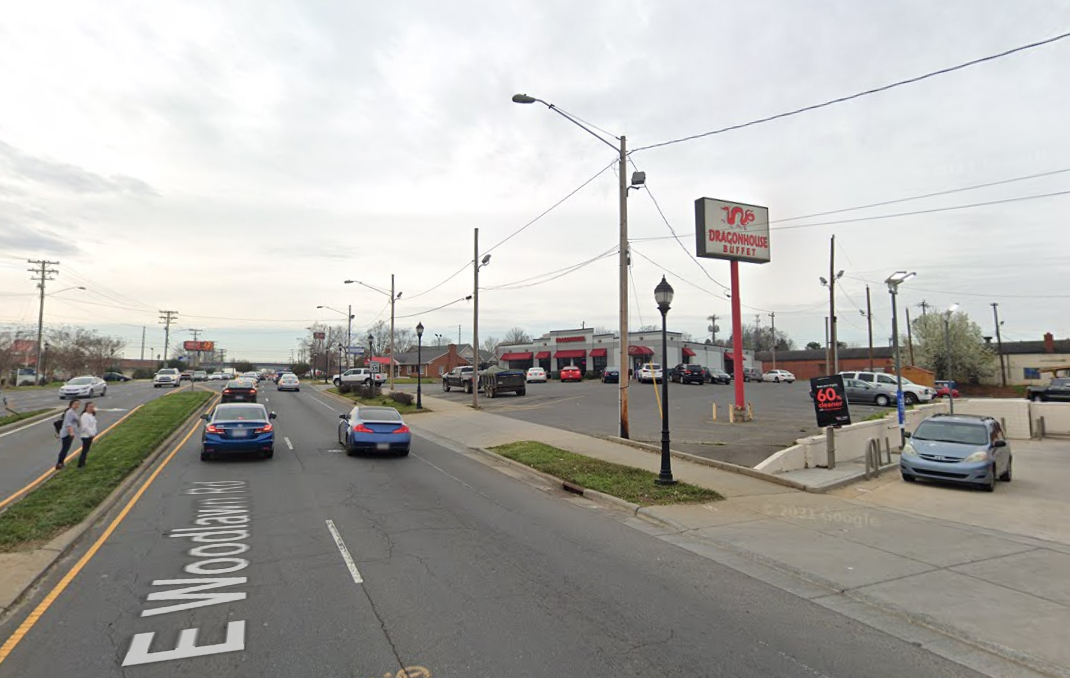 At a closed Chinese restaurant sandwiched between busy roads near the Blue Line, Charlotte City Council is wrestling with a choice: Make exceptions to aspirational rules for a more pedestrian-friendly future in order to accommodate the car-centric present?

On its surface, the rezoning request City Council heard Monday night doesn’t seem all that significant. Fifth Third Bank is planning to build a branch at the corner of Woodlawn Road and South Charlotte, on a one-acre site formerly home to the Dragon House buffet. The bank wants to include two drive-thru lanes at the branch – pretty standard these days.

But this particular site is less than a half-mile from the Woodlawn station on the Blue Line light rail, just across a large shopping center and parking lot. It’s part of a strip of land that City Council voted to rezone in 2019 to new, transit-oriented development rules. In all, council decided that some 1,500 parcels along the Blue Line should be designated for transit-oriented, denser, mixed-use development (as opposed to car-centric development like drive-thrus, auto dealerships and strip shopping centers).

Now, the bank branch wants to switch its zoning designation from TOD-Community Center to TOD-Transitional. The difference: Drive-thru lanes would be allowed in the second designation.

It sounds like a wonky argument (TOD-CC vs. TOD-TR?), and not a particularly dramatic one. Fifth Third representatives said Monday that the bank will build its branch either way, and the area at Woodlawn and South is a long way from being a particularly pedestrian-friendly place now. But council members and transit advocates fear that if the city compromises and allows the TOD-TR switch and the associated drive-thru, it will set a precedent and start chipping away at the higher land-use and development standards for sites near transit stops that council voted on just over two years ago.

“If you don't let those land use policies take hold over time, you will degrade and never get to the intent of the policy,” council member Braxton Winston said at Monday’s meeting. “And you will create holes and one-offs here and there that, again, degrade the intent of this policy.”

He painted a picture of what the area could look like in coming decades if City Council sticks to its plans: Someone could walk from the apartments and townhouses under construction nearby, stop at the bank, grab a cup of coffee and a breakfast sandwich, then hop on the light rail. 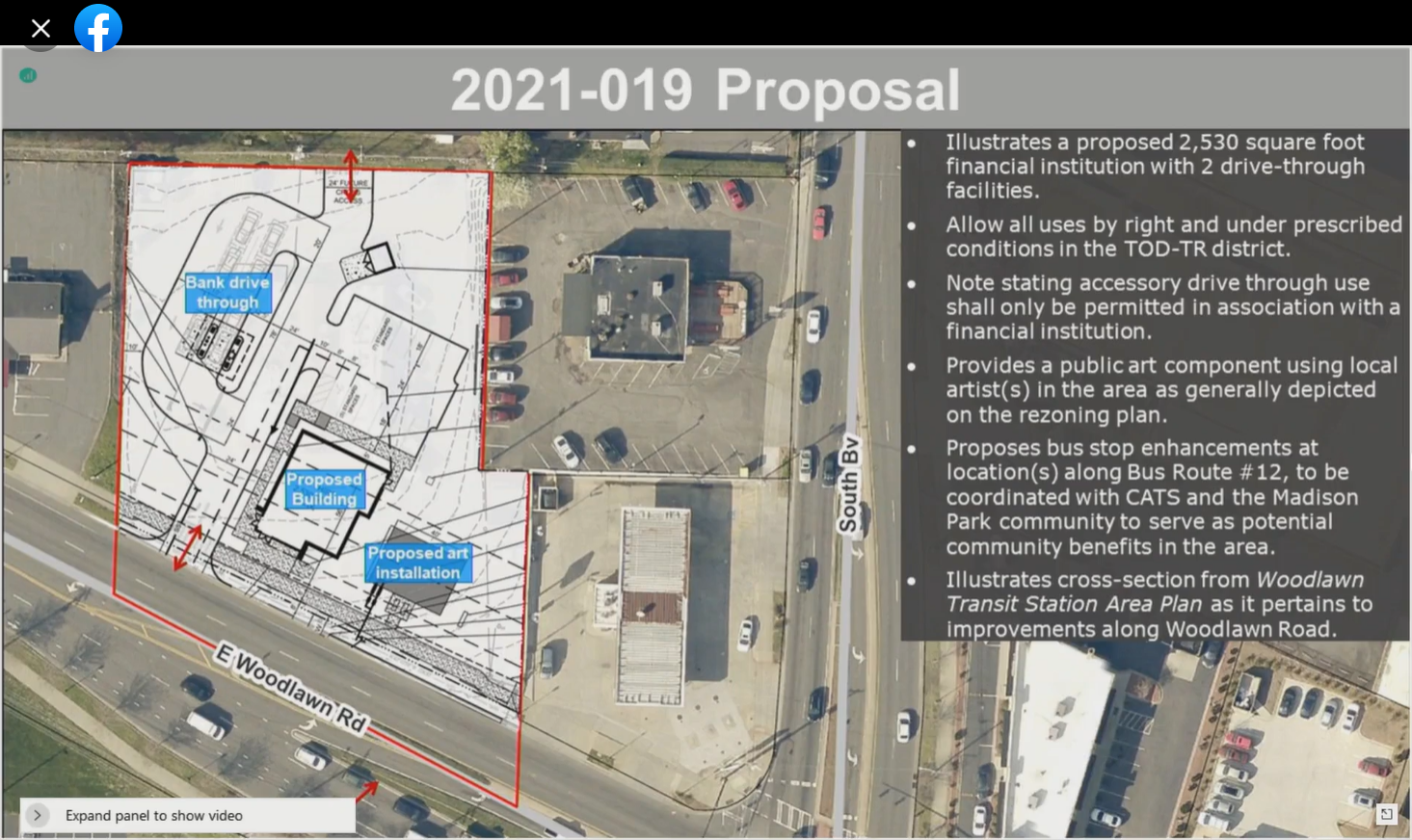 A slide from the presentation given to Charlotte City Council at their rezoning meeting.

“We'd like to see those things come to better fruition over time rather than chip away at them little by little,” said planner David Pettine, talking about the danger of making exceptions to transit-oriented rules. “You do two, then you do four…that’s where staff is concerned.”

Supporters of the bank’s plan pointed out commitments that Fifth Third – which is embarking on a major Charlotte expansion – made to improve the adjacent bus stop and include public art if the plan is involved. Bank representatives said drive-thru business soared during the pandemic, and those using drive-thrus for in-person services are more likely to be low-income, disabled or otherwise in need of special accommodations that drive-thrus make more convenient.

“It had a disproportionate impact on those that are underbanked and unbanked,” said council member Tarik Bokhari. “If they don't have an option that's open to them...they're going to go to check cashing locations. There's one right down the street from this here.”

Post-pandemic, Charlotte is likely to see more businesses requesting drive-thrus, as consumer patterns have durably shifted. On Randolph Road, both Bojangles and Chick-fil-A are seeking rezonings that would allow them to demolish their existing buildings and become drive-thru only locations.

Businesses say it’s what their customers want. But such buildings, wrapped by lines of cars and cut off from the street by a moat of traffic, are directly in conflict with some of Charlotte’s recently adopted big policy goals. Those include creating “10-minute neighborhoods” where residents can access goods and services without getting in their cars, boosting transit use, lowering emissions from vehicles, and making it more appealing for residents to walk or bike instead of drive.

“There are policies you've adopted that do not support primary uses of automobiles near some facilities, such as transit stations,” Charlotte Planning Director Taiwo Jaiyeoba said Monday.

When Charlotte rolled out its transit-oriented zoning rules in 2019, the new categories were the first taste of the city’s upcoming Unified Development Ordinance (still in process, with a vote expected next summer). The rules, which apply to developments near transit stations, generally call for denser development, more pedestrian- and bike-friendly amenities, and more urban, less suburban, ground-floor designs.

The city proactively rezoned thousands of acres of property along the Blue Line to the new TOD districts. That was partly to head off more transit-unfriendly developments like many that had already popped up along the Blue Line, such as auto dealerships, car washes and large gas stations adjacent to the city’s light rail.

So, while one bank branch with two drive-thru lanes might not seem like a big deal, allowing one exception in the TOD zone could lead to others. And the rezoning request also represents a test of sorts for city officials: Are they willing to say no to something that might be popular now in hopes of spurring the transit-friendly, walkable future that many have said they want?

“We've got to balance the market demand with the transit-oriented use, and that's not an easy ask here,” said city council member Dimple Ajmera. A new mother, she said she appreciates the ease of drive-thrus in a way she never did before, especially in light of the desire to keep young children safe from COVID-19 exposure. “We have the goals for the TOD, but at the same time you're trying to balance it with where the market's going.”

Bokhari pointed out that the site might be near a transit station, but it’s surrounded by high-speed thoroughfares and seas of asphalt parking lots. He suggested that Winston’s walkable vision is a long way away.

“If you want to sit on the curb of Woodlawn and eat an egg and cheese sandwich right now, you will likely die,” he said.

Shannon Binns, executive director of Sustain Charlotte, was on the advisory committee that helped craft the TOD rules. He said allowing drive-thrus in the city’s transit-oriented areas will send a signal that Charlotte isn’t serious about the development rules it sets.

“There's so many goals we will have a harder time meeting if we open that door and allow exceptions,” Binns said, in an interview. “We have to end that practice and stick with what we've committed to doing, despite the political pressure.”

City Council was split on the issue Monday. They could vote on the proposal as soon as next month. Council member Victoria Watlington said that, despite the city’s blanket rezoning for transit-oriented development in 2019, the city makes its decisions on a case-by-case basis.

“Our zoning decisions should reflect what our community actually wants and what the need is,” she said. “I hesitate to force walking on people when that's already an option here.” 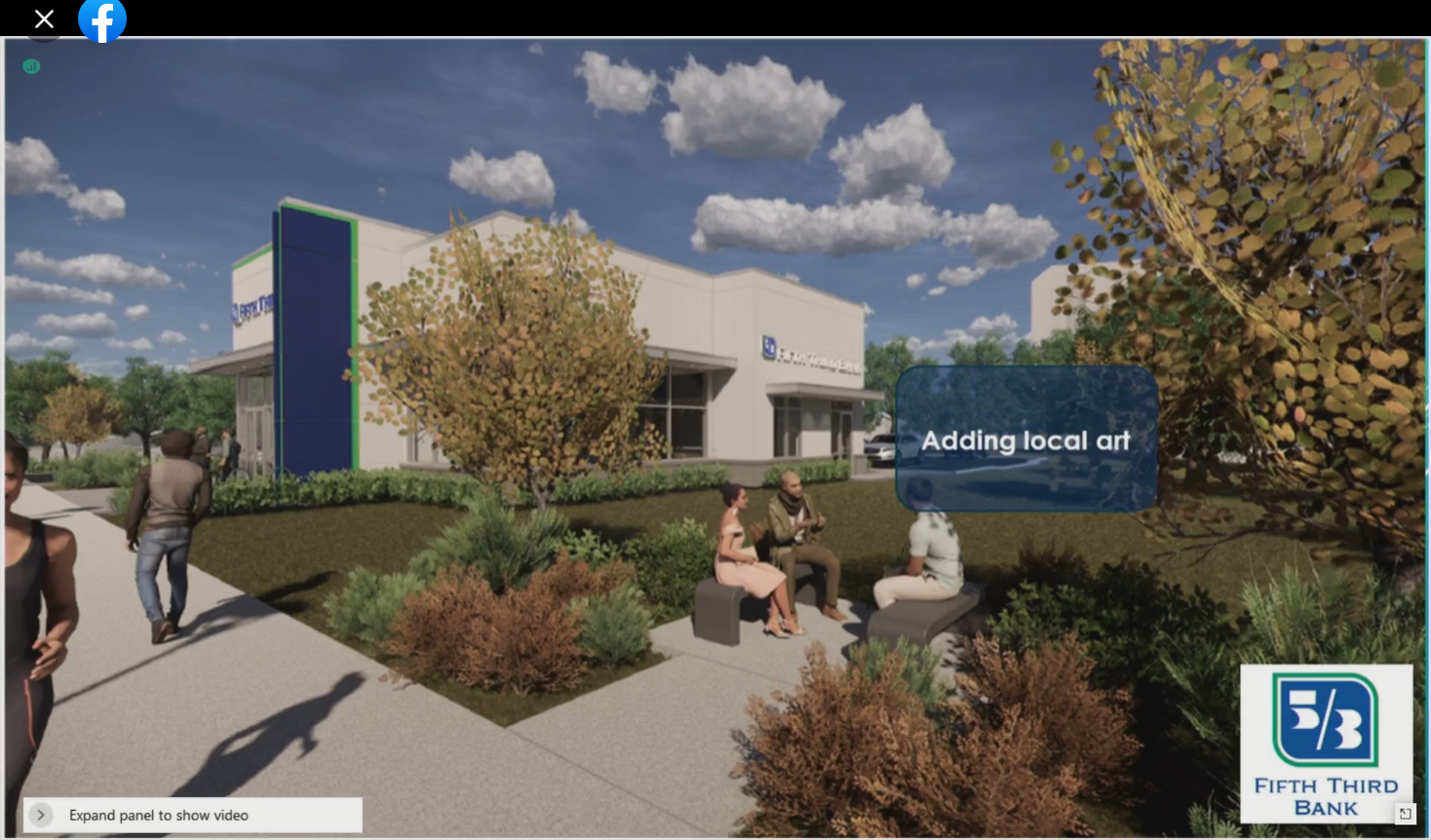 Watlington, who said she supports the rezoning, said that she views a drive-thru as another option to reach the bank branch, making it more accessible.

“I don't think our role here necessarily is about eliminating options just because they're not to our personal liking, but about preserving options for the people who live there and are going to be using this,” she said.

Regardless of the outcome of this particular rezoning, Charlotte will see similar conflicts over the next few years, as the city transitions from its decades-old development rules to the new Unified Development Ordinance.

As Bokhari put it: “We're going to be at this decision point countless times over the next five years.”