Moving to the suburbs: Three things I’ve learned that make me hopeful 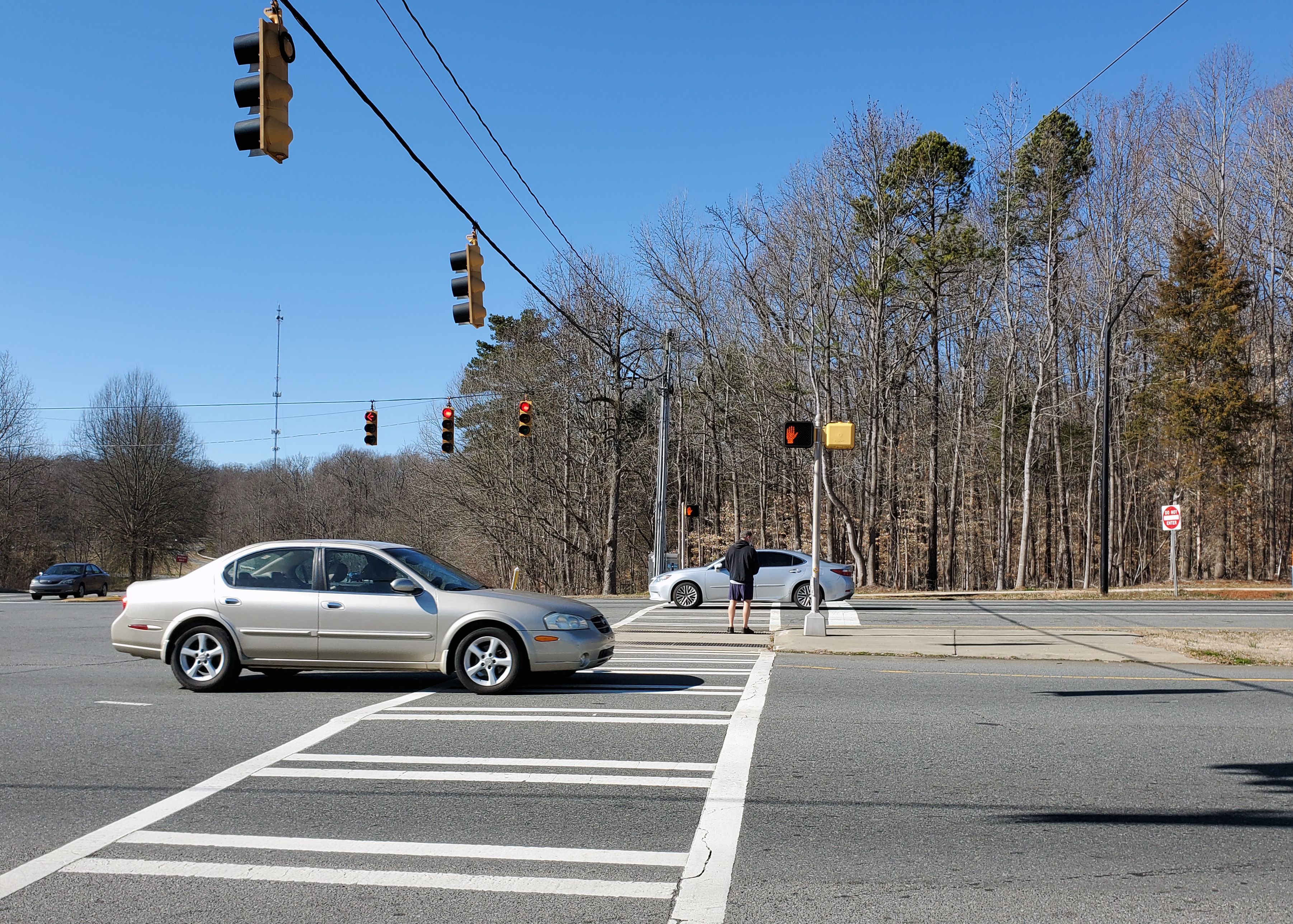 When the moving truck pulled up to the Dilworth duplex we’d been renting for years, I felt more than a twinge of regret to be leaving the urban amenities I’d come to love.

Living within a short walk of two supermarkets, plentiful coffee shops, bars, restaurants, and some of Charlotte’s best parks was a fantastic convenience. But after nearly a decade in Dilworth, three different rentals, one toddler running around and another baby on the way, we had decided it was time to buy – and the million-dollar-plus price tags for single-family houses in our neighborhood ensured we’d be looking elsewhere.

So we set off in search of a house and a yard, and ended up on a cul-de-sac. Our timing was fortuitous, as we moved in a month before the coronavirus lockdowns hit and closed, at least temporarily, most of the places we had truly hated to move away from. The house has been a major contributor to our continued sanity over the past year. Still, after spending all of my adult life in walkable, urban neighborhoods, I sometimes feel a pang when I realize I’ll have to jump in my car to satisfy the craving for a cappuccino or head back to the grocery store for that one ingredient I forgot.

And there’s also a bit of guilt mixed in with that annoyance at our car-dependency. As someone who has written about growth, development and transit in Charlotte for years, often highlighting the need to find better ways to get around in our sprawling, car-bound city, I still sometimes wonder if the living-space-for-distance decision we made was ultimately the right one.

My ambiguity reflects the transforming landscape of our urban discourse as well. The suburbs have become a political football, with former President Trump promising to “save” them and opponents pointing out discriminatory practices that initially carved the suburbs out as enclaves of white flight. And “retrofitting” the suburbs is an increasingly important focus for urban designers, as people look to bring more vitality to the land of white picket fences for people who want to be able to own a house and walk to a coffee shop.

But after a year in the wilds of Charlotte suburbia, I can see things aren’t quite as simple as I once might have thought. I think we can have more urbanism in parts of Charlotte beyond uptown and the city’s close-in neighborhoods, as city planners envision in the “10-minute neighborhood” goals they’re crafting as part of our new vision plan. And though we can’t flip a switch and convert 310-square-mile, mostly single-family Charlotte into a dense metropolis, neighborhoods I once would have described as just “the burbs” are actually a lot closer to achieving a more urban, connected and less auto-dependent lifestyle – if we’re willing to make just make a few changes.

Here are three things I’ve learned in the past year (besides how much time it takes to rake the leaves and mow the lawn):

Greenways should be about more than recreation

Recently, after dropping my car off for some overdue maintenance at a shop on Monroe Road, I pulled my phone out, ready to call my wife for a ride home. Then it struck me: Why not walk?

The shop was near one end of McAlpine Creek Greenway, and our house is near another, but the simple idea hadn’t crossed my mind. I put my phone away, walked across the parking lot to the greenway entrance, and I was home in less than 30 minutes.

Our greenways are a fantastic and growing resource, but many of us (including me) usually treat them as just a recreational opportunity for people nearby. Most of the signage and accessories on our greenways reinforces this, from workout stations to quarter-mile markers to trailside maps that only highlight residential areas you can walk or bike to.

A simple mindset shift – as I experienced on Monroe Road – as well as some improved wayfinding signs and connections from greenways to commercial areas could go a long way to encouraging people to use our greenways for more than a jog.

This would take some reconfiguring. For example, the Campbell Creek Greenway passes directly behind the Super G Mart-anchored shopping center, offering safe and convenient access to great food and awesome Vietnamese subs. But you’d never know that from the greenway; it’s across a creek, screened by trees, separated by a fence and only faces the blank, back loading docks. The shopping center faces Independence Boulevard, and is totally auto-oriented, despite its (theoretically) easy accessibility from huge neighborhoods by bike and foot. The only way to access the shops and restaurants by foot or bicycle is getting off the greenway and getting onto Margaret Wallace Road towards the six-lane, 55 mph Independence Boulevard, crossing busy intersections and a huge asphalt parking lot – a decidedly unpleasant experience. 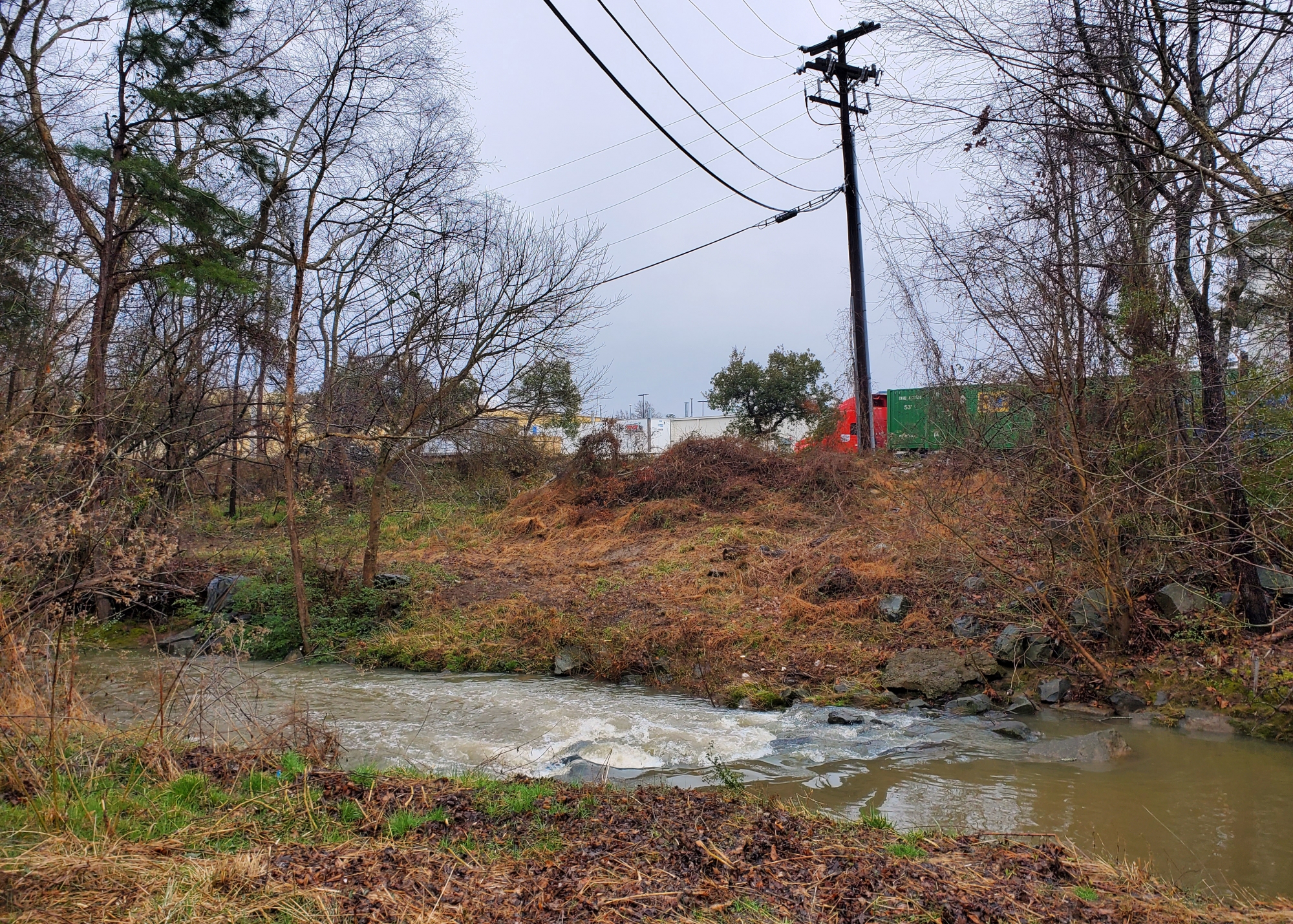 There's a vibrant shopping center across the creek, on the other side of those trucks and loading docks, but walkers and bicyclists don't have an easy way to access it from the Campbell Creek Greenway. Photo: Ely Portillo

In some cases, better signage could highlight existing connections. Imagine if instead of just noting which neighborhoods or streets a greenway entrance is near, a sign pointed out “Harris Teeter, Food Lion, shops and restaurants – 0.7 miles/12-minute walk this way.” That’s the case from the Monroe Road/McAlpine Creek Greenway intersection, where thousands of houses along the greenway potentially have ready access to the shops and restaurants most undoubtedly drive to.

The other component, of course, to making this a success would be building safer and more pleasant pedestrian and bicycle access from the greenways to commercial centers. In the McAlpine Creek example, that measly seven tenths of a mile along Monroe Road involves crossing more than two dozen curb cuts and intersections where drivers whip in and out of parking lots, on a narrow sidewalk directly adjacent to the 45-mph road.

This isn’t to suggest greenways can replace every trip, or that we’ll all be walking four miles in the July heat to haul our weekly groceries home (I will certainly be in my car). But our greenways are so close to giving us more comprehensive ways to move around without getting in our cars – in many cases they already do – if we just use them a bit differently.

The second thing I’ve learned is related to the first: I think we’re a lot closer to a greater urban experience in a lot of Charlotte than we think. The suburbs aren’t the monoculture they once were, nothing but an endless expanse of quarter-acre lots spreading out in Levittown-ian uniformity.

Within a two-mile radius of our house, there’s a Korean grocery store and restaurant, Brazilian grocery shops and restaurants, Mexican taquerias, Nepali, Thai, Indian, kosher, ramen eateries, plus five grocery stores and a bevy of other retailers. In fact, I’d wager that there’s at least much, if not even slightly more, diverse food and retail than we had in our old neighborhood.

The difference, of course, is connectivity. With Dilworth’s grid of streets, wide and near-universal sidewalks, pedestrian islands and other features to enhance safety and comfort, walking a mile or more – even with a stroller – didn’t feel dangerous or unreasonable. In our more suburban perch, it often seems like the only way to access the great amenities around us is by car – even if they’re the same distance.

Even though our current neighborhood is fortunate to have lots of sidewalks (unlike much of Charlotte), there are plenty of places where they simply end. Sardis Road and Sardis Road North, both main thoroughfares if you want to walk anywhere, feature sidewalks that mysteriously terminate. You’re left to either find another way to go (adding minutes and miles) or walk in the gutter alongside cars going 45 mph or more (which I’ve seen young children do). 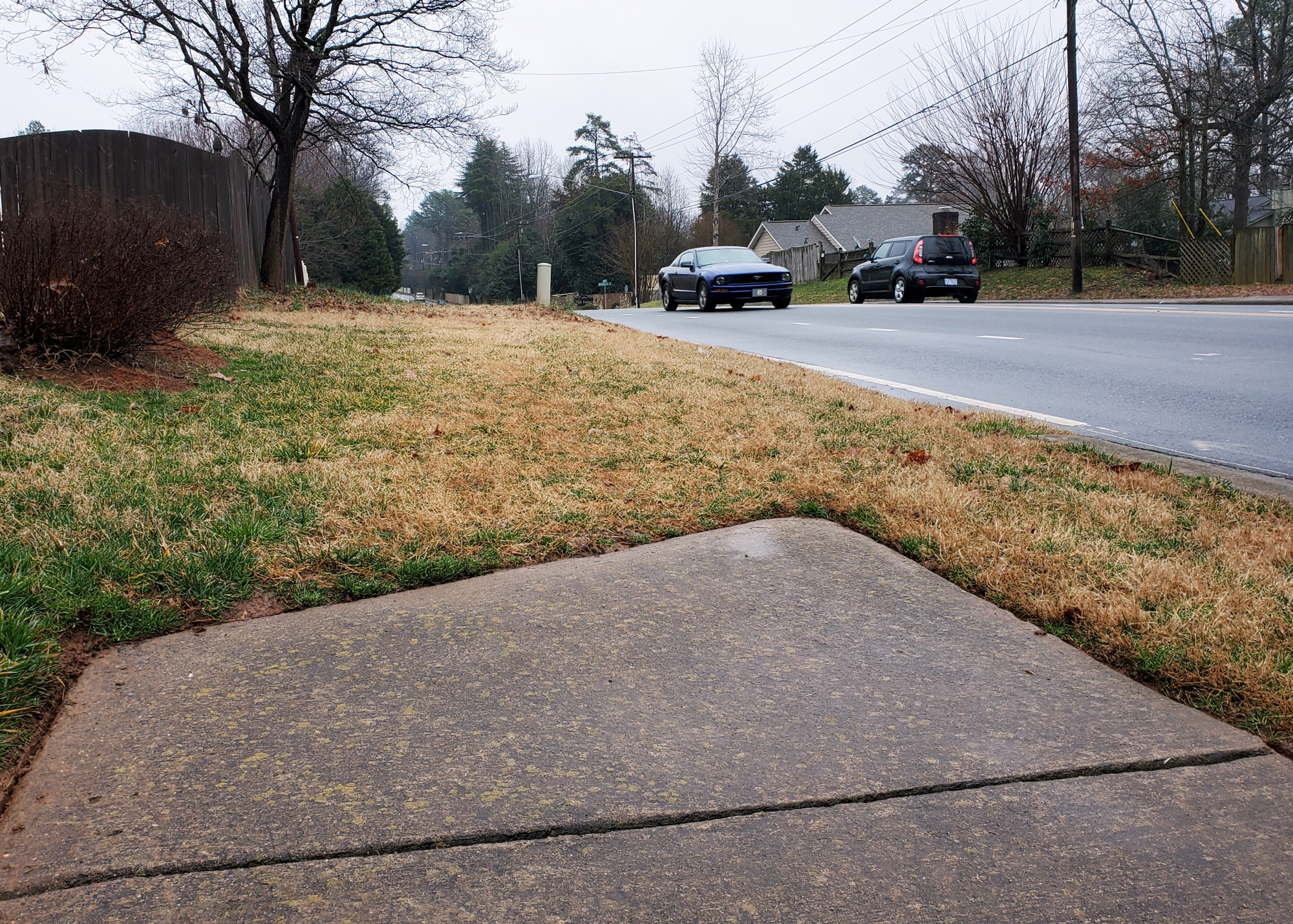 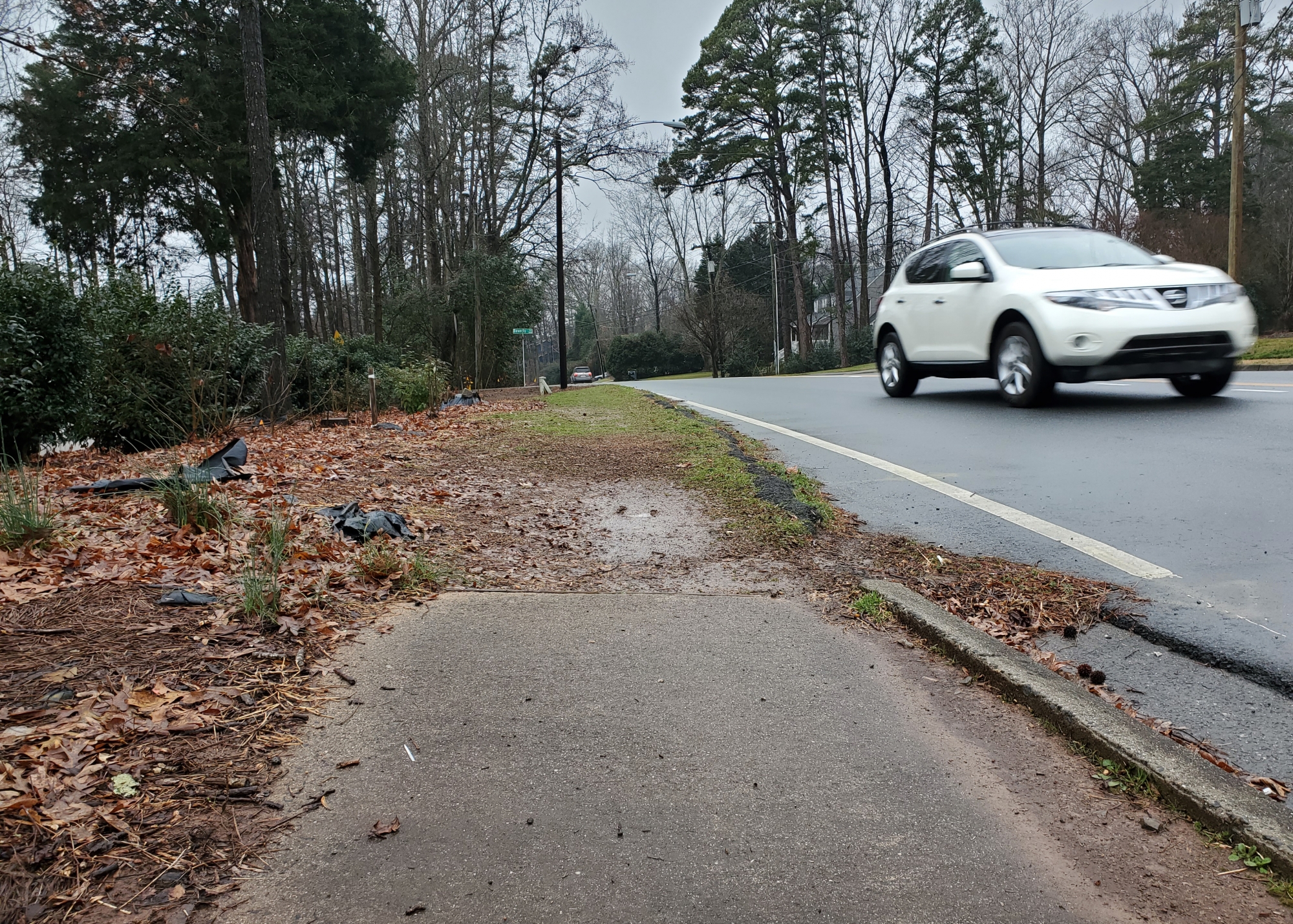 Where the sidewalk ends: Scenes like this start/stop sidewalk, which cuts off easy pedestrian access to major nearby shopping centers and restaurants, are still far too common in Charlotte.

The other issue is that Dilworth, like many inner-ring neighborhoods, was built in the pre-auto era for people who expected to walk or hop on a streetcar for most of their day-to-day errands. Its grid of streets makes it easy to find plenty of ways to get around. Many of Charlotte’s post-WWII neighborhoods, built in the heyday of car culture, feature lots of cul-de-sacs, looping roads that lead back to other looping roads, and a street network that often leaves no alternative except a single, main road to enter or leave an area.

There’s no quick or easy fix to this. The city of Charlotte knows about sidewalk gaps, and has filled in hundreds of miles of them over the past decades, but there are still hundreds of miles to go. Sidewalks are often built incrementally, as other projects develop, which means connecting the separate parts can take even longer.

And if you’ve ever seen a City Council meeting about opening a “stub street” to connect a neighborhood to a main road via a former dead end, you know that there’s often huge opposition to such projects from neighbors who fear more traffic. Reconfiguring neighborhoods that were built only for cars to give us better access to what’s already around us won’t be cheap or easy.

Looking at Charlotte’s auto-centered strip malls, acres of parking facing expressways that slice up neighborhoods, it’s easy to push pieces around on the metaphorical map and wonder why people don’t just drive less, walk more, live in a smaller house closer to the city’s core, or move closer to where they work.

But it’s hard to predict how life events like having kids will change your decisions about where to live, how much space you need and what kind of house you want until you actually do them. Moving to be near your jobs isn’t so simple when partners work in different parts of town. A car is a really convenient way to move two kids around, especially when it seems like they require an Army battalion’s worth of snacks, wipes, diapers, changes of clothes and portable potty facilities. The real estate market is brutally tough right now, with fast-rising prices and lack of supply that block many people from buying or renting in close-in, transit/walking/bicycling-friendly, mixed-use neighborhoods.

And the why don’t people just drive less or live in “better” neighborhoods? approach risks ignoring the historical reasons so many people were locked out of Charlotte’s most desirable neighborhoods (such as redlining and racial discrimination), as well as the reasons many people still aren’t able to get on the property ladder (low wages, the racial wealth gap and more).

A more inclusive and understanding public dialogue about how our city grows – with, dare I say, a bit more humility, from me as well – could go a long way towards helping us find real, achievable ways to make our communities more livable.

And after a year in my new suburban porch, I’m actually more optimistic than ever we can make it happen.