Putting a ‘there’ there: Placemaking aims to boost overlooked areas 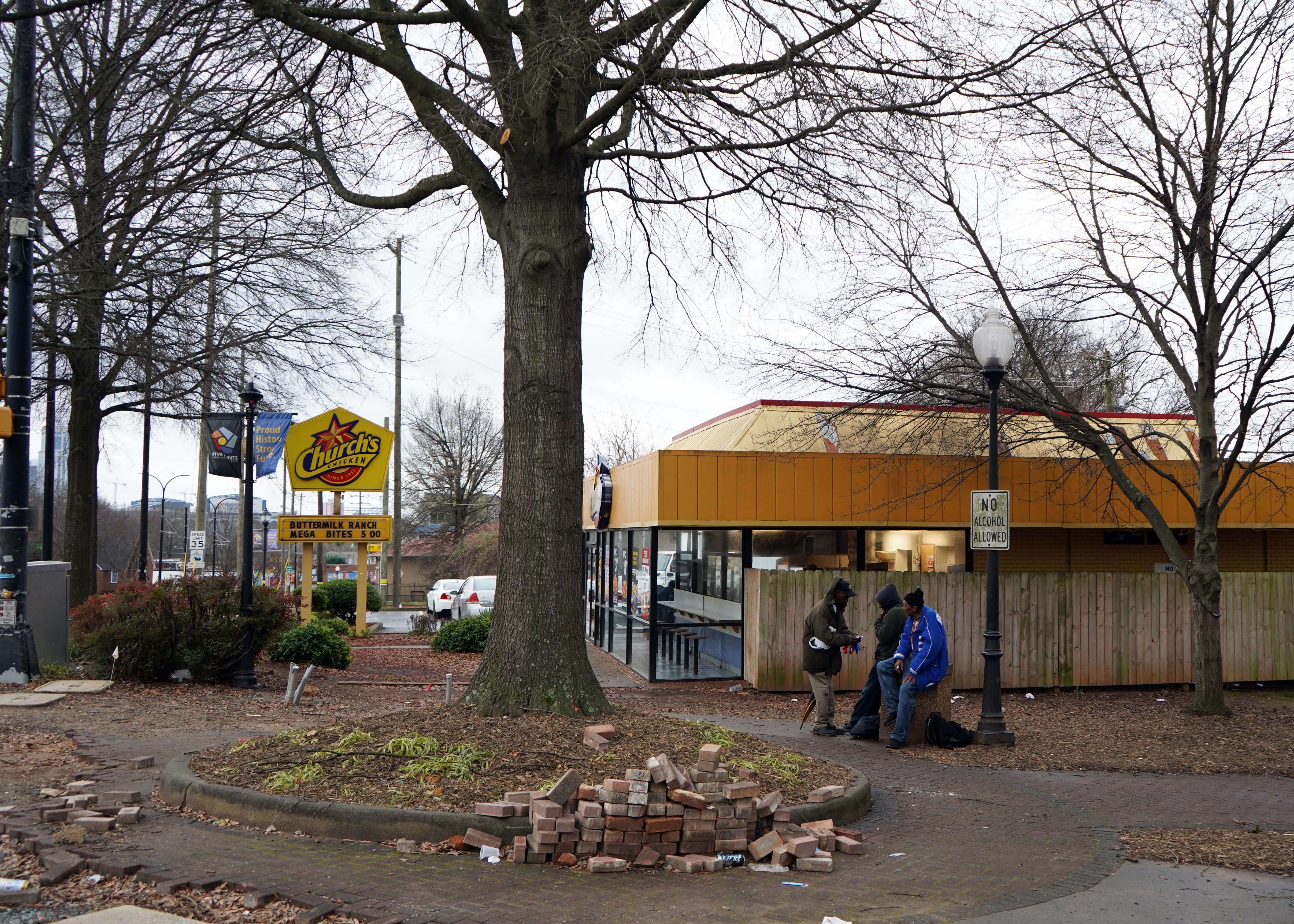 A vacant park in a bustling downtown. A waterside bandshell and lawn that sit empty most days of the year. A busy intersection thousands of people drive through every day without a pause.

In a fast-growing city that lacks parks and other public gathering spaces, planners are looking at ways to make these places into more of, well, places. Not just somewhere to pass through, but somewhere to meet a friend, take a walk, have a cup of coffee or just spend time.

“This is a tremendous opportunity for us,” City Council member Malcolm Graham said of the plan to create a programmed, active plaza in what’s now a slightly confusing, auto-oriented intersection just west of uptown.

Here’s a look at how placemaking efforts could change three parts of Charlotte that are currently more of an afterthought than a destination. Each is different, but they share similarities: A desire to give people spaces to sit and gather, ideas for regular programming in addition to adding new features, and improved pedestrian access.

Most people don’t stop at the intersection of Beatties Ford Road, West Trade Street, Rozelles Ferry Road, Fifth and State streets unless they have a red light.

The Five Points intersection sits at the gates of Johnson C. Smith University, in a high-traffic area on the edge of uptown. But it’s clearly built for cars, wide and unappealing for pedestrians, with traffic coming from several different angles. A Church’s Chicken with plywood over one window occupies one side, while a convenience store and gas station with empty pumps sits opposite.

There isn’t much for a passing pedestrian to do but sit on a curb or one of the low trash cans, and much of the area is torn up and littered with half-finished tracks, construction equipment, mud and barricades.

That construction is a sign of the change coming. The Gold Line streetcar, which will run from JCSU, through uptown and east to Plaza Midwood, is on the way. Though delayed, it’s set to open in early 2021.

The city has committed $5.5 million worth of bond money to improve the Five Points intersection and add a public plaza.

“I think it’s going to really remake the lower part of the Beatties Ford Road corridor,” said Graham, at a recent City Council meeting. The plaza will include tables and chairs, places for people to gather, better pedestrian lighting, wide sidewalks and crosswalks, solar-powered lighting in brick pavers and public art.

[Read more: What Charlotte needs to grow into a great city]

The Knight Foundation has also pledged $394,200 for programming to “activate” the plaza. That will include events like outdoor music and entertainment, a part-time event coordinator, “student ambassadors” from JCSU and public WiFi in the plaza.

So, will creating a better built environment ad adding more programming in the Five Points intersection draw more people? A few men hanging out outside the Church’s Chicken last week agreed that improvements are long overdue. But some were skeptical about the long-term impact, and worried they and their friends would be pushed out of the new Five Points.

“Let me put it this way,” said a man who gave his name as Chief. “You won’t see people like me here anymore.”

The new plaza is expected to be complete by the end of 2020.

Symphony Park, adjacent to SouthPark mall, is packed with thousands of visitors — for July 4 fireworks, and a few days each summer when the Charlotte Symphony holds its Pops series. The park with a pond (for stormwater detention), a large lawn and a bandshell is mostly vacant for the rest of the year.

That emptiness might seem like a paradox: Charlotte is woefully short of park space, and SouthPark is a booming area, with long-established neighborhoods, the region’s biggest mall, full office towers and thousands of new housing units, all of which swell the local population and (presumably) their need for a convenient outdoor space.

But there are several big reasons the park isn’t more popular. It’s squeezed between busy roads and acres of asphalt parking, cut off from both the mall and the neighborhood. With no features beside the bandshell and the lawn, there isn’t much to do there. And it’s privately owned, by mall owner Simon Property Group, though public access is ensured by a permanent easement.

“People don’t realize this is a public space,” said City Council member Tariq Bokhari, who represents the area. “It’s kind of closed off. It feels like it’s just for events.”

Last year, the city and Simon announced plans to invest $5 million each to reshape the empty lawn into a real place for people to gather. Bokhari said a consultant is working on plans and has been gathering input in community meetings. A design and strategy should be finished in the next several months.

The new park could include places for kids to play, space for people to sit and gather, WiFi, more frequent programming like pop-up retail or music (aside from the Pops) and better connections to the mall and surrounding areas. Right now, Bokhari said, Symphony Park is seen as a specialized venue for just a few large gatherings each summer.

Once the plans are complete, Bokhari expects more public presentations, followed by a formal contract between the city and Simon that could come later this year.

Uptown is booming, but at its central intersection of Trade and Tryon streets, Thomas Polk Park sits mostly empty. Designed in the late 1980s (the park opened in 1991), city-owned Polk Park is a small, gloomy warren of jagged walkways leading to a low waterfall. The adjacent towers and low tree cover block out much of the sun. Quotes about Mecklenburg County history decorate the park.

Although it sits at the city’s premier intersection, across from Bank of America’s headquarters, a major hotel and other office high-rises, Polk Park feels uninviting, dark and shut off from the sidewalk and surrounding buildings. There’s not much seating or reason to linger, and few people use the ⅓-acre park.

“The fountain and surrounding space have become difficult and expensive to maintain and repair, and the design has lead to misuse and is not conducive to vibrant programming,” Charlotte Center City Partners recently said, announcing a plan to overhaul the space.

The city of Charlotte and Center City Partners have hired a consultant team, led by Agency Landscape + Planning, to redesign Polk Park. A final design and construction is still a little ways off, however.

“We have a talented and engaged design team that is still evaluating options. We will be in the design phase and not moving into implementation until after the RNC (in August),” said Charlotte planner Grant Meacci.

But there are hints of what the new park could look like, and how the city hopes it will function. Meacci pointed to Congress Square Park in Portland, Me., as an “inspiration image.”

Like Polk Park, Congress Square Park was once “derelict,” with little public use and no programming. That has changed, however, thanks to a concerted effort and public-private partnership to both make the urban park more physically appealing and give people a reason to visit. The park, in Portland’s Arts District, regularly hosts free public art, music, dancing and other programs to draw visitors, in addition to becoming a popular hangout spot with seating and tables.

“The design of the park – with multiple physical and visual barriers to entry – and the lack of amenities, made organic community use of the park a challenge and, unfortunately, a lasting management structure was never established,” the Project for Public Spaces wrote. “The square is starting to come alive, gain momentum, and to live up to its possibilities as a public space.”