As Charlotte moves forward with its overhaul of development rules, a plan for new apartments and townhouses in a suburban, office-focused part of the city has exposed some of the tensions between building a future vision while living in our present reality.

On Monday, City Council deferred a rezoning vote on a plan to build 380 apartments and attached single-family homes this week off Billy Graham Parkway and Tyvola Road, after a last-minute request from the developer to hold off on making a decision. The site — adjacent to Charlotte’s VA hospital, sandwiched between a wastewater treatment plant and freight railroad tracks — might not seem that conducive to new residential development. But it would add density on a vacant site near employment centers such as the airport, as well as reserving 6% of the new housing units for low-income residents — which line up with some of the goals of Charlotte’s contentious 2040 Vision Plan.

City planning staff recommended against approving the plan from Childress Klein and Dominion Realty Partners, while the advisory Zoning Committee unanimously came out in favor of the idea.

Why the split decision? As the city moves from generalities in its 2040 plan to specifics that will be encoded in its zoning and land use regulations, there are still big questions remaining about how best to interpret the plan’s goals.

Build for now, or for the future?

One of the key goals in the 2040 plan is to create “10-minute neighborhoods” and cluster new developments there. These are areas where someone can reach most of the goods and services they need in 10 minutes or less, without having to drive, thus cutting down on traffic. Think Dilworth, Elizabeth, or even new, mixed-use developments like Waverly that include shops, apartments and offices mixed together.

The site in southwest Charlotte is by no means a 10-minute neighborhood.

“It's also not located near any significant retail and services, which would be contrary to the overall 10-minute neighborhood goal,” Charlotte planner Dave Pettine said at an earlier rezoning hearing.

But Keith MacVean, the land-use consultant representing the developers, pointed out that without more residents nearby, retailers aren’t likely to move in anytime soon.

“Bringing more residential...will encourage more retail and personal service users to develop,” McVean said. He also pointed out that adding residential to an area dominated by office parks will help diversify the land use and give people who work in those offices a place to live nearby.

The argument gets into a little bit of a chicken-and-egg rut: Should you focus on building housing near existing retail and services, or add more housing to underserved areas in hopes of attracting those retailers and services in the future?

“There's not much there,” she said. “Then you're going to get into the situation of residents saying there's no grocery store.”

What counts as transit?

Another key goal in the Charlotte 2040 plan is expanding access to transit and connecting more neighborhoods to other ways to get around besides driving everywhere.

But what does transit really mean — and are we only talking about rail lines?

The Tyvola/Billy Graham site isn’t on a train line, and there are no plans for it to be. The east-west Silver Line would be miles to the north, and other possible transit projects like the Red Line commuter rail and Phase 3 of the Gold Line streetcar are far distant from this part of town.

Combined with the lack of nearby retail and services, that might make the 380 apartments and townhouses feel like an auto-dependent island. The site is projected to generate about 2,200 vehicle trips a day if the residences are built there.

But that’s not the whole story. The site is also adjacent to the No. 60 bus line, which connects to both the airport and the Blue Line light rail. And the Irwin Creek Greenway segment being constructed would connect directly to the site, offering an alternative route to shopping and (eventually) uptown.

[Read more: Overcoming the 'stigma' of riding the bus]

“That greenway, when connected, will actually provide this site access under Billy Graham Parkway to Yorkmont and to City Park,” said McVean.

So how expansive will our definition of connectivity be in the new vision — and what will we count as progress to that goal?

How far will we go to ease the housing shortage?

If there’s been a defining issue in Charlotte for the past few years, it’s housing affordability. With for-sale inventory at record lows, prices are skyrocketing and buyers are competing fiercely for the few available properties. And with rents also jumping sharply, there’s no relief in the rental market.

That housing shortage ties to numerous other issues, from Charlotte’s poor economic mobility ranking to the city’s rising homelessness problem to the 81,000 cost-burdened renter households paying more than 30% of their income for housing.

The latest data from the Canopy Realtor Association shows the Charlotte region still has less than a month’s worth of housing inventory on hand, down by almost half from last year. The median sales price is up 14%, to $331,575. 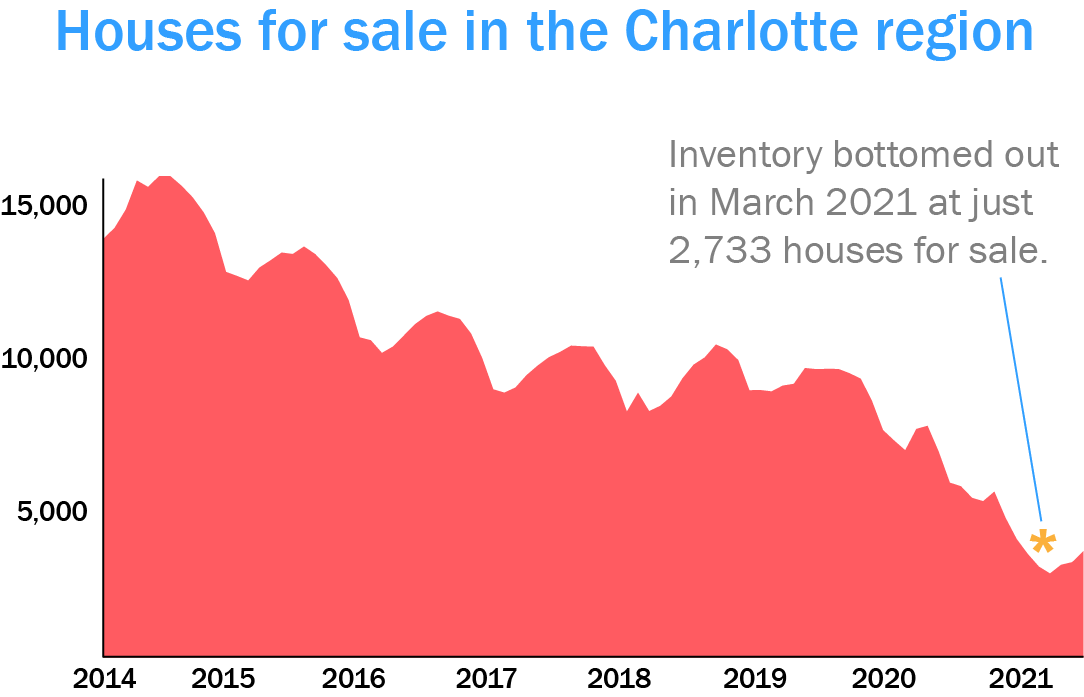 One goal of the 2040 plan and the development rules rewrite is to smooth out the building process, making it easier for developers to get approvals with less ad hoc dealmaking on rezonings. Without that, the housing supply spigot could remain screwed down tighter than it needs to be for the foreseeable future.

Are local land use regulators ready? Council member Victoria Watlington said so at the zoning hearing.

“I like this one, y’all, I really do,” she said. “I definitely see the idea of strengthening the mix of uses in the area.”