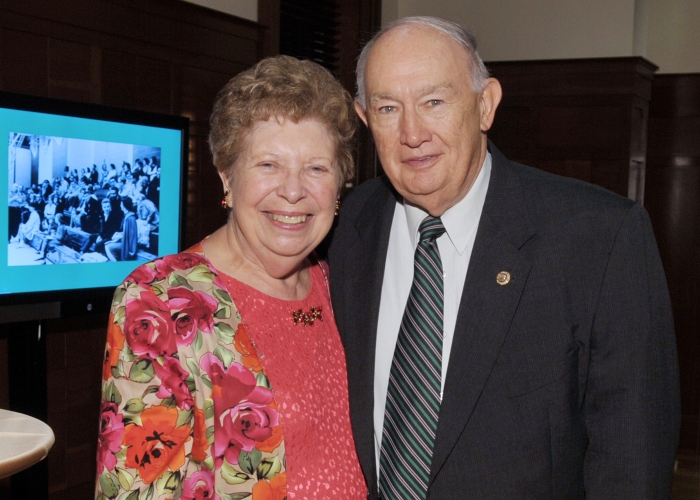 A major gift to the UNC Charlotte Urban Institute from the institute’s first director, Dr. Norm Schul, and his wife, Marianne ‘73, will establish an annual speaker series focused on policy issues affecting the Charlotte region.

The Urban Institute’s first endowed gift will establish the forum series as an annual event that brings regional leaders together with national experts to examine policy issues impacting the Charlotte region. It will be informed by research that will be conducted by institute and other university researchers.

In making the announcement, UNC Charlotte Chancellor Phillip L. Dubois noted that the annual forum series will continue the institute’s historic mission – which Schul himself helped establish 50 years ago – of linking university research with community dialogue to enhance the Charlotte region's quality of life.

Dr. Norm Schul came to UNC Charlotte in the late 1960s at the invitation of the university’s first chancellor, Dean Colvard. Schul was instrumental in establishing a number of its most noted programs, including the UNC Charlotte Urban Institute and the Department of Geography & Earth Sciences.

Norm and Marianne Schul were part of a generation of early university leaders who helped position UNC Charlotte as a regional leader in education and applied research. Since they retired, the Schuls have continued to give generously of their time and resources to support the university’s ongoing growth. Their gifts have celebrated their many ties to the university, including an endowed professorship to foster the career development of tenure-track faculty within the Department of Geography & Earth Sciences (where Norm was the department’s first chair), and an endowed scholarship for graduate students in counseling and special education at the Cato College of Education (where Marianne received her master’s degree in education in 1973).

The Schuls’ gift to the Urban Institute continues that tradition of providing sustaining support for programs they were instrumental in building.

“As the UNC Charlotte Urban Institute prepares to celebrate its 50th anniversary in 2019, how fitting that our founding director and his wife have made this extraordinary gift to establish a forum series that symbolizes the essence of the institute’s mission,” said current institute Director Jeff Michael.

The Schuls’ generosity has ensured that regional conversations between researchers, policy makers and the community will continue for years to come.  “We are deeply grateful for their gift,” Michael said.

The Schuls’ see their contributions to the university as a lifelong partnership of giving back to UNC Charlotte. A 2013 video of the Schuls spotlighted their earlier gifts to the university, and captured their shared philanthropic ethic. In the video, Norm says of Marianne, “she has been a partner in this all the way,” and she adds, “We just like to pay back.”

The inaugural Marianne & Norman W. Schul Urban Institute Forum Series will be held in late 2019 or early 2020, and will be one of the signature events associated with the institute’s 50th- anniversary celebration.