There’s a housing affordability crisis in rural areas, too 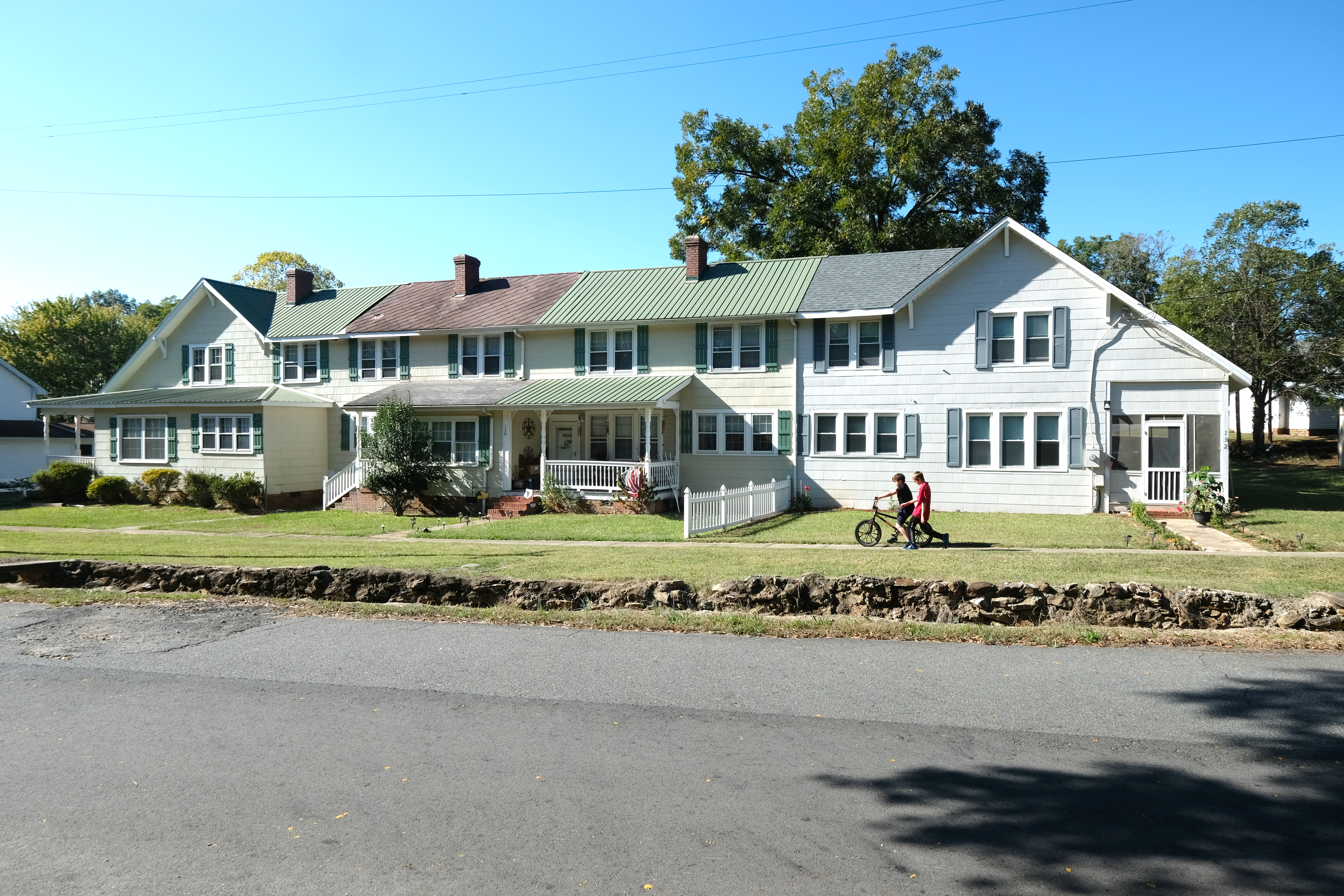 Charlotte has struggled with housing affordability in recent years, as the city faces rising rents and home prices driven by rapid growth and low supply.

But urban areas are not the only places grappling with these challenges, even though affordable housing is typically seen as an urban problem. Rural areas in the Carolinas Urban-Rural Connection study region are also experiencing a severe housing shortage and affordability issue.

The common measurement of affordability is known as “cost burden.” A household that spends more than 30 percent of income on housing is cost-burdened, leaving less money available for building up savings or buying necessities like food or medicine.

Urban and rural communities here are nearly equal when it comes to the share of households that are cost-burdened; across the project region, an average of 27 percent of households struggle with housing costs. Intuition might suggest that people in urban and suburban areas where housing costs have increased fastest would be most affected. But the data don’t support that.

Mecklenburg County is in the top quartile of counties in the study region according to a well-being index we calculated. Richmond County is in the lowest quartile. Those two counties have the highest share of cost-burdened households. (The well-being index includes three variables: median household income, general poverty rate and the rate of children living in poverty. All data are from the American Community Survey, 2017, unless otherwise indicated.)

The table below considers cost-burdened households (including both renters and homeowners).

Renters are typically viewed as more vulnerable than homeowners, but both groups can be similarly constrained. In Richmond County, N.C. and Fairfield County, S.C., for example, well over half of the renting population is cost-burdened, at 59 and 65 percent, respectively.

But the counties with the highest median income in the region — Mecklenburg and Union, N.C — still fall in the middle of the pack when it comes to renters paying more than 30 percent of their income towards rent. And they’re at the top of the list for cost-burdened homeowners, at 22 percent of households.

Where are renters and rental properties?

The housing crunch is related to the diversity of housing options. In Montgomery County, for example, thirty percent of households rent, yet multi-family housing makes up less than 2 percent of available stock (not including duplexes and similar small rental properties). About 25 percent of renters, consequently, are living in mobile/manufactured units (according to the Department of Housing and Urban Development, a factory-built home, prior to June 15, 1976 is classified as a mobile home and one built after that date is a manufactured home).

This trend ripples across the majority of counties in the region: less than 5 percent of the region’s housing stock is multi-family, yet renters make up, on average, 28 percent of the population by county. 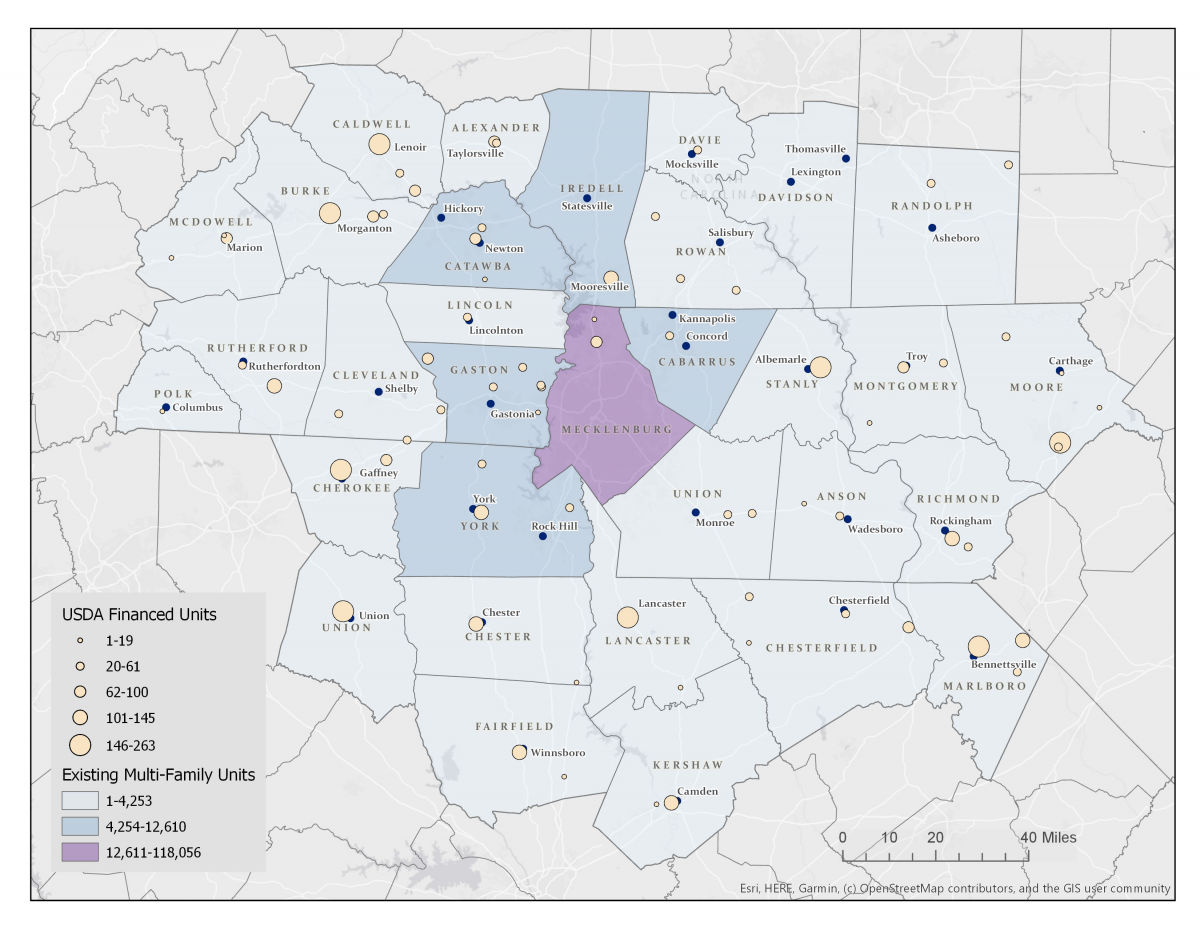 Other growing communities near the urban core have somewhat more multi-family housing (Cabarrus, Iredell, Catawba, and Gaston), but the other twenty-six counties have substantially less. The availability ranges from 7 percent in Rowan County to 1 percent in Alexander County.

An already-complicated picture of low supply and rising prices may continue to become more so.

The U.S. Department of Agriculture’s Rural Development Section 515 program finances rural rental developments, providing an important source of affordable and well-maintained housing. But additional affordability provisions, such as rental subsidies for tenants, are available only until the loans mature or are paid off, about 30 years in most cases.  Where there are not restrictive provisions in place, property owners are free to convert to market-rate housing, putting the units out of reach for many renters.

The USDA financed 127 properties in the study region, providing over 3,000 units to low-income renters. A quarter of the mortgages on these properties will be paid off in the next ten years, threatening an important source of affordable housing. No new loans to build under this program have been issued since 2009 in the 32-county study region.

How is the region responding to the housing supply and cost crunch?

The issue is getting attention.  Economic developers we spoke to for the project expressed concern that their job — making the region attractive to new employers locating here — is more difficult because of housing supply and affordability issues.

Some say they’re adding housing strategies to their portfolio alongside the typical job and investment activities. Some examples include a hotel-to-apartment conversion in Statesville, an effort by local authorities in King’s Mountain to increase the workforce housing supply, and a public debate about how to add multi-family units to the housing stock in Davie County.

Davie County illustrates one version of what makes this issue tough: Growth alone doesn’t fix it. The county has grown more than 50 percent in 25 years, and totaled just over 46,000 residents in 2016.

The likely reason?  Lack of rental properties. Over three-quarters of the county’s housing is single-family built on detached lots, almost one-fifth are mobile/manufactured homes, and only 5 percent is multi-family — leaving few options for younger people who aren’t ready to own a home.

John Eller, Davie County Manager, says the county needs more housing options, both affordable and market rate, to increase its population of adults in their prime working years. “We want to prevent our local workforce from looking outside Davie County for housing," he says.

An adequate supply of housing at a range of price points might not be the only important variable in the business recruitment picture, but it is a significant one, especially for rural areas already struggling to attract investment.

Solving the affordable housing challenge — one that affects every community in the Carolinas Urban-Rural Connections region — could become yet another issue that points to the value of regional planning and collaboration.