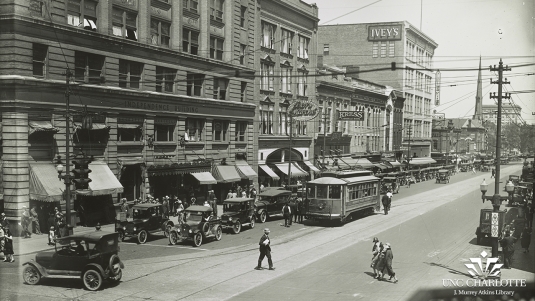 A shiny new skyline, a “New South” city, 150,000 new residents since in the last decade — however people describe Charlotte, the word “new” always seems to be one of the first on their tongues.

That’s to be expected in a fast-growing city like Charlotte. But it’s also part of the reason Charlotte has a reputation for being a city with little regard for its history, always distracted by the quest for the next big thing (NBA! NFL! Light rail! New banks! NASCAR Hall of Fame! Whitewater Center!), and all too ready to make room for the new by tearing down the old.

It’s not an entirely fair reputation, of course — there is Charlotte history, if you know where to look. But that reputation is one of the reasons three new groups with three new approaches to saving more of Charlotte’s past have sprung up over the past year.

Here’s a look at each of them, along with their approaches:

Few of uptown’s original or even relatively old structures remain; sites such as the Polk Building and the Query-Spivey-McGee Building have been demolished in recent years. Now, the former Barringer Hotel is the focus of a campaign to save one of the few remaining buildings of its era.

Built in 1940, the 12-story Barringer Hotel is “the only hotel of its style and type remaining in Center City Charlotte,” according to the Charlotte-Mecklenburg Historic Landmarks Commission. The hotel, at North Tryon and 8th Streets, fell onto hard times and closed in 1975. The city of Charlotte bought the property and converted it to housing for elderly residents, renaming it Hall House.

The building closed in 2014 and has sat vacant since. Now, Inlivian (formerly the Charlotte Housing Authority) plans to demolish the Barringer and build a mixed-income housing development in its place.

Local design professional and development-watcher Clayton Sealey launched a campaign called “Save the Hall House” this summer intending to prevent Inlivian from proceeding with demolition (disclosure: Sealey has written for this website).

“Hall House might not be the most architecturally significant building, but symbolically, as the last of its kind, it's preservation is vital to setting the tone for how we approach historic structures in the future,” said Sealey. Ideally, he says the building should be saved and restored to become a modern hotel. He said he’s talked with three interested buyers who would consider the property.

Losing Charlotte's largest remaining mid-century hotel should not be an option anybody accepts, and thats why today we launch a new organization called Save The Hall House.#SaveHallHouse pic.twitter.com/6f9bvw59lX

Inlivian has met with Sealey’s group, and says it is committed to preserving the spirit and legacy of the building, according to the Charlotte Observer. Sealey said they should do more.

Focused campaigns to save a single building are a rarity in Charlotte. Other notable structures like the Egyptian-style Masonic Temple uptown have fallen unceremoniously.

[Charlotte’s torn down a lot of old buildings. But one type has staying power.]

When it comes to preserving old buildings, developers often pull out a trump card: the bottom line. It’s almost always cheaper to tear down and start fresh.

That’s what Morrill, the historian, heard for decades as chair of the Charlotte-Mecklenburg Historic Landmarks Commission. The commission can delay demolition of registered buildings for up to a year, but can’t ultimately prevent their destruction unless it uses its limited revolving fund to buy a property.

“If they don’t, you just have to wait a year and tear it down,” said Morrill.

Since retiring from the commission in 2019, Morrill has focused on his new group, Preserve Mecklenburg. The organization’s approach is simple: instead of trying to completely preserve old houses and historic properties, with all their property untouched, Preserve Mecklenburg works to find buyers who agree to a historic preservation easement on the structure and are free to develop the rest.

Take the historic Shaw House in east Charlotte, near Charlotte Country Club. The former residence of Charlotte mayor Victor Shaw, the current owner was planning to demolish the 1928 Colonial Revival house and develop a cul-de-sac infill project on the large lot. After the landmarks commission delayed the demolition, Morrill and Preserve Mecklenburg were able to find a buyer who was willing to purchase the property with a preservation easement on the house.

The buyer plans to build 10 new houses on the rest of the property, while leaving the Shaw house itself protected by an easement in perpetuity.

“That’s an extremely powerful tool to advance preservation, and hasn’t been used in Mecklenburg hardly at all,” said Morrill. Allowing infill development around the original house makes the deal economically viable — buying the 3-acre site for $1.85 million (which is what the developer paid) just to save one house wouldn’t be a sensible use of limited public preservation funds.

By using private donations and matching historic property owners with private sector buyers, Morrill hopes the new group will be able to be more flexible and act faster than local governments.

So far, Preserve Mecklenburg has been notching a series of wins on properties like the Shaw House and the Patterson Grocery, a former Black-owned neighborhood grocery store in Washington Heights. They’re not marquee skyscrapers or buildings like the Hall House, but Morrill said saving these threads of Charlotte’s history is still important to the city’s identity.

“If it went, what do you lose? You lose the layers of time. You lose the stories,” said Morrill. “The reality is, that greatly harms the neighborhood feeling.”

When it comes to Charlotte history, Tom Hanchett thinks that there is plenty all around us. Many people just don’t know where to look.

That’s one reason Hanchett, a longtime local historian, and partner Michael Moore launched the Charlotte Neighborhood History Toolkit this year. The idea is to give people an easy-to-use resource to navigate old deeds, building permits, city directories, plat maps, newspaper advertisements, and subdivision records that can tell the story of a neighborhood.

It’s not the sort of epic history you might read in a bestseller, but rather the more intimate, day-to-day history that surrounds us. And the records to learn about this community history are more accessible than ever.

Once the province of musty archive rooms and finicky rolls of microfiche, many of these records are available online for free. They can help answer questions like “Who lived in my house?”, “How did my street get its name?” and “Was my neighborhood segregated when it was built?”

“The goal is to make it really simple,” Hanchett told the Urban Institute. Neighborhoods can benefit from learning about their history — he pointed to Dilworth, one of Charlotte’s few designated historic districts, a status it obtained through the efforts of a dedicated core group who researched the streetcar suburb’s past.

“A way for a neighborhood to build its own sense of community is to brag on its history,” said Hanchett. “It’s a process that brings people together.”

Moore said Charlotte — founded in 1768, after all — deserves a better reputation for history.

“People think I'm crazy when I say this, but I think Charlotte is a really good place to do history,” he said. “There’s so much change.”