Q&A with urban planner Ryan Gravel, author of ‘Where We Want to Live’ 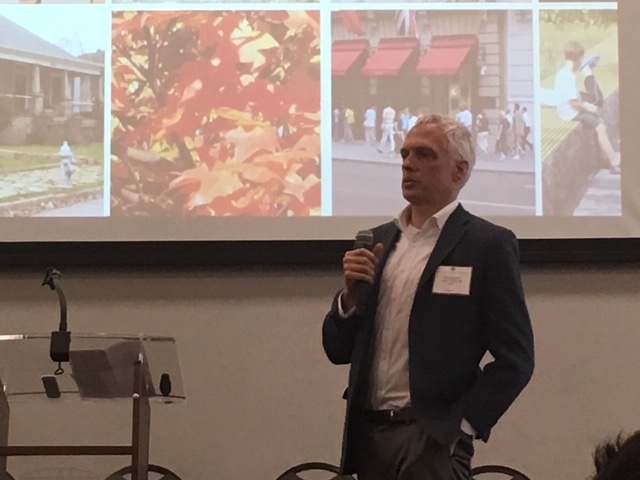 Ryan Gravel, an urban planner, designer and author of “Where We Want to Live,” travels the country talking about the need for a bold and provocative approach to managing the growth of cities and its impact on lifestyles of residents. Gravel’s 1999 master’s thesis was the catalyst for creating the Atlanta Beltline, a 22-mile transit greenway along the city’s old rail line that has sparked redevelopment of neighborhoods and billions of dollars of public and private investment.

Gravel has been to Charlotte several times in recent months. In December, he was the keynote speaker at the 11th Annual Trail Forum, hosted by the Carolina Thread Trail, where several hundred people gathered in Mooresville to discuss issues related to designing and building greenways and trails. The Carolina Thread Trail is a network of trails, greenways, blueways and conserved corridors in 15 counties in North and South Carolina. It currently has more than 260 miles of trails and 170 miles of blueways.

In November, he was the first speaker in a new initiative, The Re:Series, which will bring various experts several times a year to explore various topics in conversations with a mix of residents and business leaders. The initiative is sponsored by Crescent Communities and Ally Financial.

Journalist Mae Israel spoke with Gravel recently about his ideas for creating more livable cities. His comments have been edited for clarity and brevity.

You have said that you think urban areas like Charlotte and Atlanta are in the midst of a radical transformation in the way that we live. What do you mean by that?

I think we are coming to the end of the last revolution in urbanism in the United States, meaning the advancement of the automobile and automobile infrastructure and urban sprawl that happened in the 20th century. It is really failing a lot of people now. People are just of sick of sitting and getting stuck in traffic. I think that is one of the driving factors toward an interest in a different way of life that is more sustainable, healthier, more walkable and more social. Private developers are creating the buildings that support those kinds of lifestyles and that’s reinforcing itself in a way that over time will pretty radically change the way we live.

We can see that areas that are walkable and have transit access, and have things like parks and trails and greenways and shopping districts, are likely to be the more successful communities in the future. The areas completely dependent on automobiles are not likely to be as successful as they were in the past. The question, though, is how we manage that. We can see it coming. Did we put in place policies that help navigate those changes or did we just let it happen? The jury is out on what that will look like. It will vary by place. I suspect that even within the same region some places will do a better job than others. That’s why it’s important to do things like this, to come together and talk about these issues so that people start doing something about it.

You have said that the answer to deal with these issues is to have a cultural revolution. What does that look like?

That is kind of a provocative way of thinking about it. It is a cultural revolution. It is not something that happens fast. It is not a political revolution, although it has political implications. It’s that we are over time, over this generation or more, changing what our expectations are. The private sector and the public sector are changing to deliver the outcomes that people want. I tell a story a lot about my grandparents being revolutionaries in their time. They would not have thought of themselves in that way. They, alongside millions of other Americans, radically changed the way we live our lives. That’s the kind of cultural revolution we’re talking about. It has significant implications for infrastructure and the way we build cities. Obviously it has a lot to do with things like food and entertainment and business and technologies and all kinds of other things.

You also have talked a lot about how infrastructure and public spaces create opportunities. From what you know about what is going on Charlotte, how do you see those things intersecting?

The last few times I’ve been here I stayed in uptown. It is changing a lot. The light rail and Rail Trail through South End clearly are creating a way of life for people that they are responding well to. That is spurring the private market to deliver different kinds of things. You’ve seen apartment buildings along the (South End) corridor being built for a while, but now you’re seeing new office buildings going in. That is a healthy way for the city to grow. It is fascinating that you can live and work and go to school and everything in a much smaller area, especially as the region continues to grow and traffic gets much worse.

You urge people to be bold and provocative. There are some similarities in how the Carolina Thread Trail and the Atlanta Beltline started. Both are also in some respects in their early stages. What advice do you have for thinking about the vision of the Thread Trail as organizers think about the next decade?

I think it would elevate the importance of the network to see it as building a way of life for people. It may be a little bit of a nuance difference, but calls into account other kinds of perspectives such as access to transit. The Thread Trail could be a way for people to connect into the transit system, sort of a last-mile, first-mile kind of strategy for expanding the reach of the transit network. It could be connected to economic development opportunities. It could be connected more thoughtfully as a public health strategy.

I think there’s a lot of opportunity to look at the trail network in terms of addressing systematic inequities in communities that have not had access routes to the economy of the region. While you’re investing in things like trails and greenways that make everything nicer, making sure that we also are supporting other kind of initiatives that make sure people who are vulnerable to changes like rising taxes and rents get to stay and also enjoy those benefits. If you see the Thread Trail as a regional building tool, then you have to acknowledge the impact of those investments on people’s lives, that as much as it creates enormous benefits, it also comes with some challenges. It is important to acknowledge that and support parallel initiatives to address those changes.

One of the things that you have said is that communities need to have a different cultural expectation. How does a city promote that?

The cultural expectations are not something we make decisions about. They just are. There are so many factors that are part of that. And part of it is infrastructure in cities and part of it is the need or desire to connect with social networks, nature or locally grown food. Because of the downside in the way we’ve been living for the last 60 to 80 years, the urban sprawl and the disconnections that come with that, not only from each other but from nature and from food systems, the desire to reconnect those things is fueling the changes in our expectations. What I think cities can do is create the infrastructure and policies to promote those connections. You can do that through physical connections, such as trails, greenways and transit, public spaces, cultural venues. You can also do that through urban agricultural programs. The cities that remain prosperous are the ones that deliver those kinds of lifestyles for people. That’s where people with those expectations are going to be moving. If Charlotte can’t deliver, they will be moving somewhere else.

As more and more people want to live a more urban life, how can a city like Charlotte make sure they preserve enough open space, particularly when the land is becoming more valuable?

That is a significant challenge. The reality is that those cities that have grown with the automobile in the way of Charlotte and Atlanta have not invested in urban green space because most people have back yards and don’t need to go to the park. The cost of retrofitting those areas with sufficient green spaces to manage growth in a positive way is going to be expensive. The clock is ticking. The cultural expectations empower leadership to make better decisions in a timetable that will deliver outcomes while we have a chance. You look at the affordability crisis in cities like New York and San Francisco. We’re not there yet but that is where we are going. We have a window of opportunity to get it right and it is closing pretty quickly.

What are some of the mistakes and minefields that you hope the people of Charlotte are able to bypass?

In my experience, when people in Charlotte say they don’t want to be like Atlanta, they are primarily talking about traffic. They’re also probably talking about the loss of tree canopy and natural spaces. I think that a really important lesson is an understanding of how automobile infrastructure works. More and wider highways don’t solve the problem. More and wider highways create more problems. We need to acknowledge that there are limitations to cars, which take up a lot of space. Vehicle automation provides a lot of opportunities to solve that problem. If we don’t match the automation of cars with land use policy that stops more external sprawl, we are only making the traffic worse. With automation also will come traffic volume because all kind of inanimate things will be riding around without any people involved.

Why do you think it is necessary that all the issues around urbanization are considered multidimensional?

Whether we acknowledge it or not, these issues are multidimensional. The best example I can think of is highways. We’ve treated highways for generations as if they are not multidimensional, that it doesn’t matter where we put exit ramps and how wide the lanes are. Of course exit ramps create economic opportunity for some communities and not others. Some people get bypassed. Some communities get destroyed. The more we acknowledge the multidimensional aspect of everything we do the better infrastructure we get.

We’re having these hard conversations in Atlanta about the Beltline and its impact on gentrification. What I hope to see in the future is that we ask the same questions about every infrastructure that we build. If we thought about the effect on communities, equity and affordability, we would make different decisions. We never ask the question about whom it will hurt and whom it will help. We hold transportation, especially highway infrastructure, accountable to an abstract idea about what a transportation plan is. We don’t ask what a transportation plan is in service to, or what outcome we’re trying to achieve. If our outcome is only efficiency, well, efficiency for whom, efficiency for what mode of transportation? Is it about mobility or economic opportunity?