When you think of ‘urban’ you might picture canyons of glass and steel skyscrapers, while the word ‘rural’ might bring to mind pastures and rolling farmland. But what do those words, precisely, mean?

In reality, the terms rural and urban are not binary, but instead represent a spectrum or continuum along which places fall. Most places are not completely one or the other, but fall somewhere in between, making clear categorization difficult. However, there are a number of classification systems that exist to attempt to do just that. Using 2010 Census data, we mapped several of these systems for our 32-county region, which are presented in the graphic below. Use the tabs at the top to explore each system.

If you want to find information for a specific area, check out the Rural Health Information Hub’s Am I Rural? Tool, which shows whether a specific location is considered rural based on various definitions, including those used as eligibility criteria for federal programs and grants.

The U.S. Census Bureau’s scheme is the simplest in terms of categories, as there are just two: urban and rural. But they are designated at the census block level, which is the finest scale census data are available. For both of those reasons, the Census definitions form the building blocks for many of the other classification systems.

The U.S. Census Bureau uses population density and other measures of development density to define urban areas. In doing so, it is able to delineate an urban area’s physical footprint more precisely than municipal boundaries would allow.

Urban areas are further distinguished into two categories: Urbanized Areas, which have populations of 50,000 or more, and Urban Clusters, which have populations between 2,500 and 50,000. Rural areas encompass all population, housing, and territory not included within an urban area. For a more in-depth explanation of the process, check out Defining Rural at the U.S. Census Bureau.

In the 32-county region, there are currently 10 urbanized areas and 34 urban clusters. Together, these urban areas encompass 68 percent of the region’s population and 19 percent of its land area.

This system offers the most precise definitions of urban and rural areas, but is difficult to use to describe or compare both types of places because little data exist at this fine scale. Data are more widely available at the county level, so classification schemes at this level are necessary to bridge the gap. The most basic of these is from the Office of Management and Budget, described in the next tab. 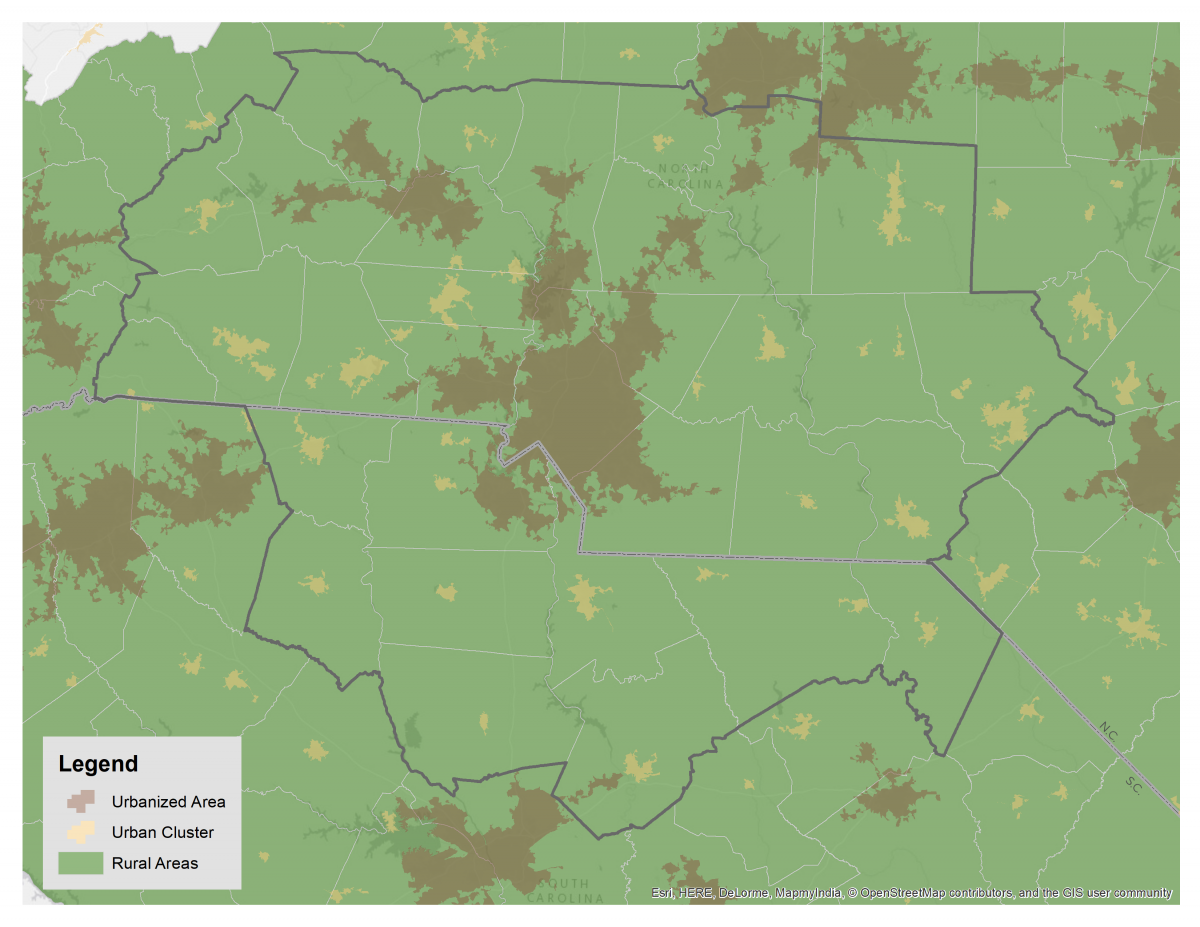 Office of Management and Budget

The federal Office of Management and Budget (OMB) defines metropolitan and micropolitan statistical areas using population, urban areas, and commuting patterns. Both of these areas include an urban core and the adjacent counties that have a high degree of economic and social integration with the core. These areas are based on counties, and thus this classification system is often used to approximate urban and rural at the county scale.

A metropolitan statistical area (MSA) must include at least one urbanized area of 50,000 people or more. At the county scale, an MSA includes the county (or counties) that contains the urbanized area plus adjacent, outlying counties where 25 percent of employed residents work in the area or 25 percent of jobs are filled by residents of the area. All counties that are part of a metropolitan statistical area are considered “metropolitan.” The majority of the 32-county region falls in this category, with 20 of the 32 counties, 83 percent of the population, and 63 percent of the land area.

The criteria that define a micropolitan statistical area are similar to that of MSAs, but instead of an urbanized area, a micropolitan statistical area must include an urban cluster of 10,000 to 50,000 people. In the 32-county region, 8 counties fall in this category, accounting for 13 percent of the region’s population and 24 percent of its land area.

All remaining counties that are not part of a metropolitan or micropolitan statistical area are categorized as “non-core”. Only 4 of the region’s counties (Anson, Fairfield, Montgomery, and Polk) are in this category, representing 3 percent of the population and 13 percent of the land area. 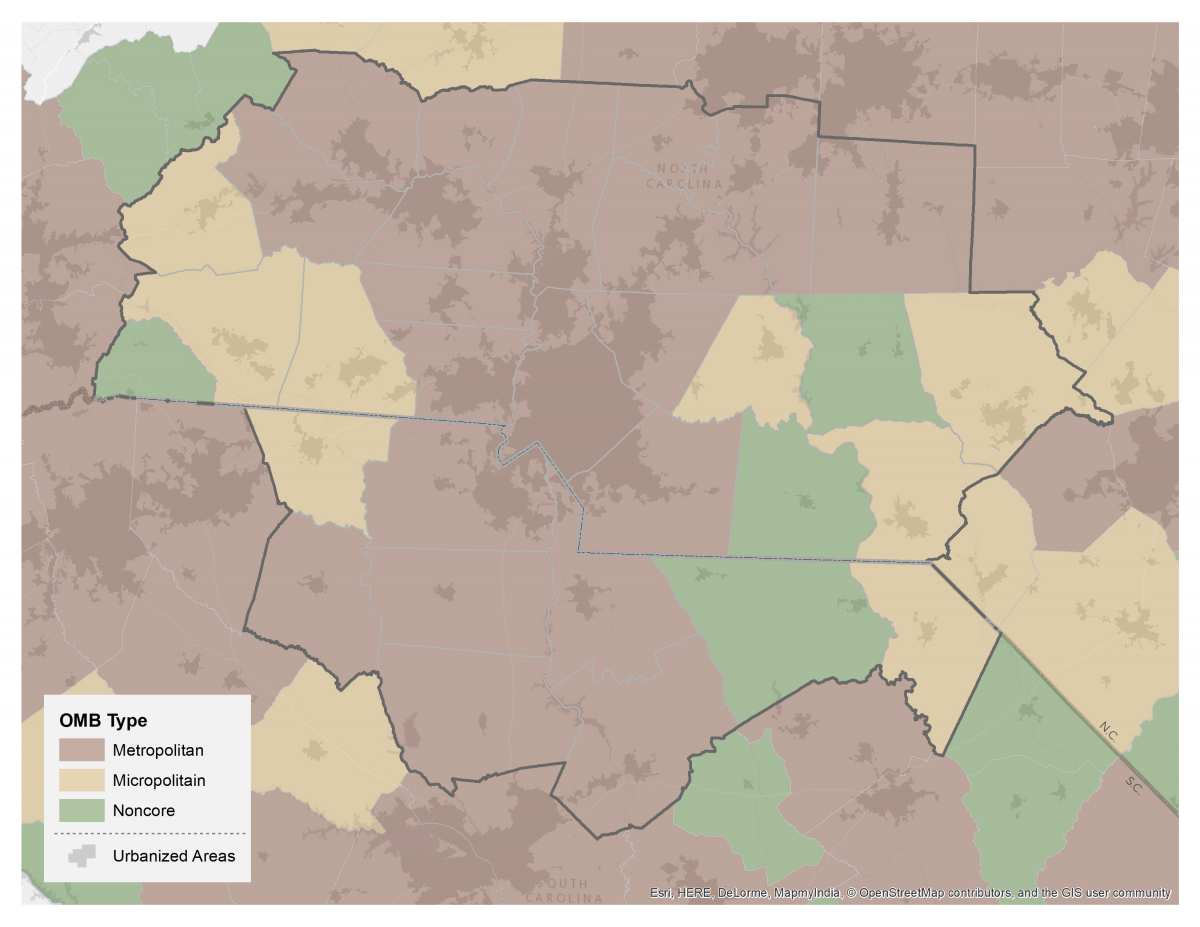 The U.S. Department of Agriculture’s Economic Research Service has created several classification systems based on the OMB categories that provide a more nuanced picture, especially for non-core areas. One is the Rural Urban Continuum Codes (RUCC), which divides metropolitan counties based on the total population of the metro area and nonmetropolitan counties by their urban population and location relative to a metro area. 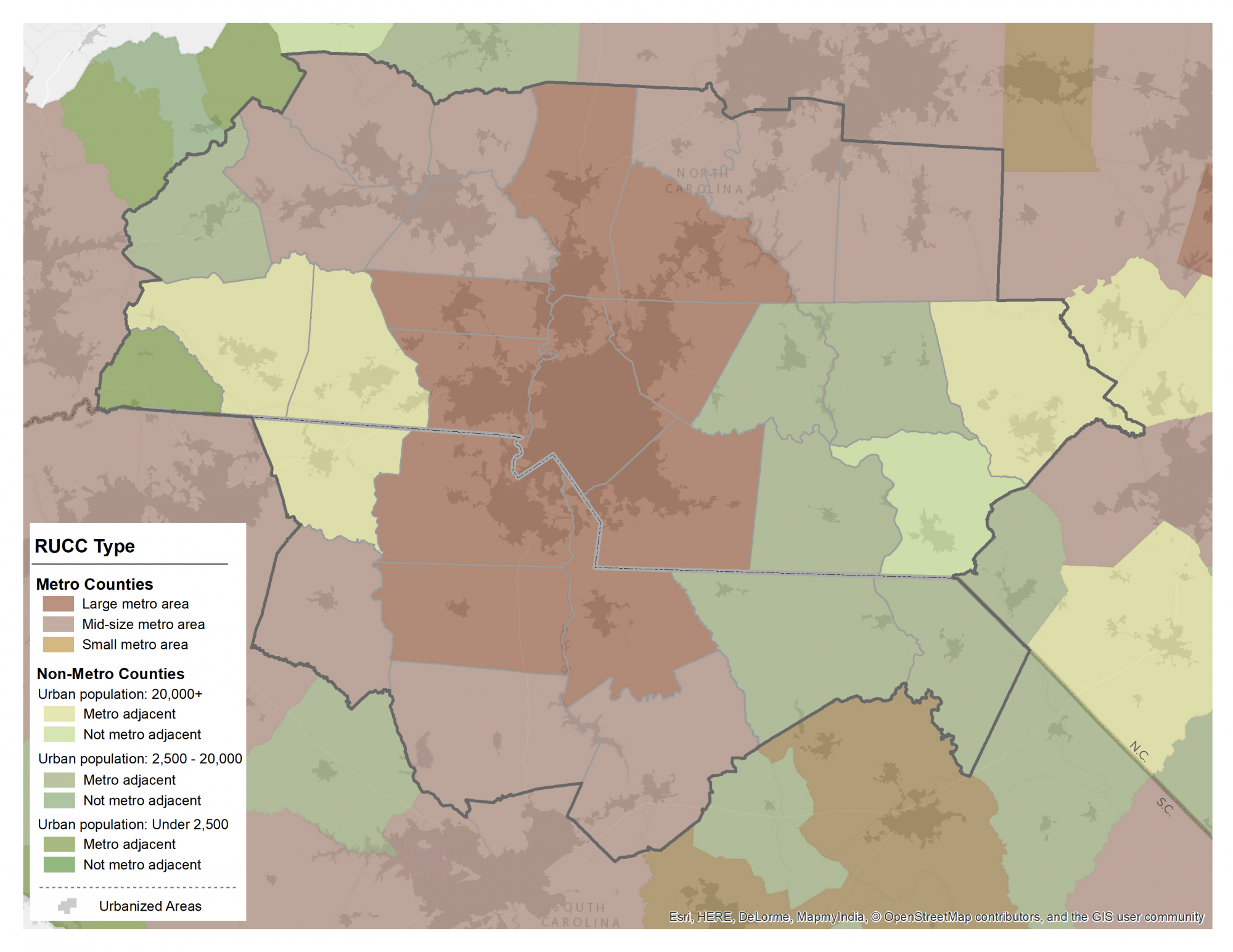 Metropolitan counties are split into two categories: those in metro areas with more than 1 million in population and those with less. In the 32-county region, this is essentially the same as the RUCC distinction, with the 10 counties in the Charlotte metro in the first tier and the other 10 in the second tier. 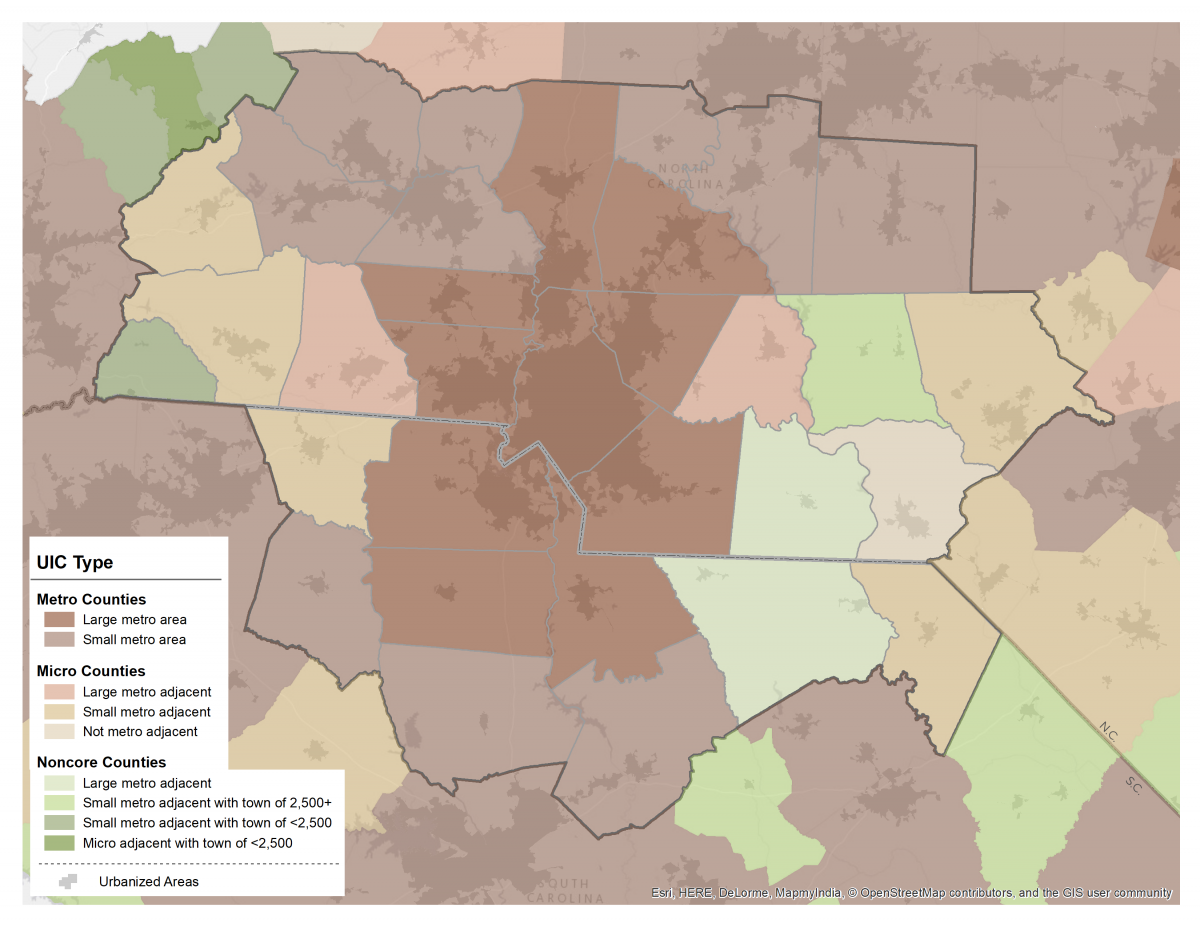 The last of the U.S. Department of Agriculture and Economic Research Service systems is a more nuanced and geographically fine-grained classification system called the Rural Urban Commuting Area (RUCA) codes. Instead of counties, this system is built on census tracts, which are classified based on urbanization and commuting patterns. 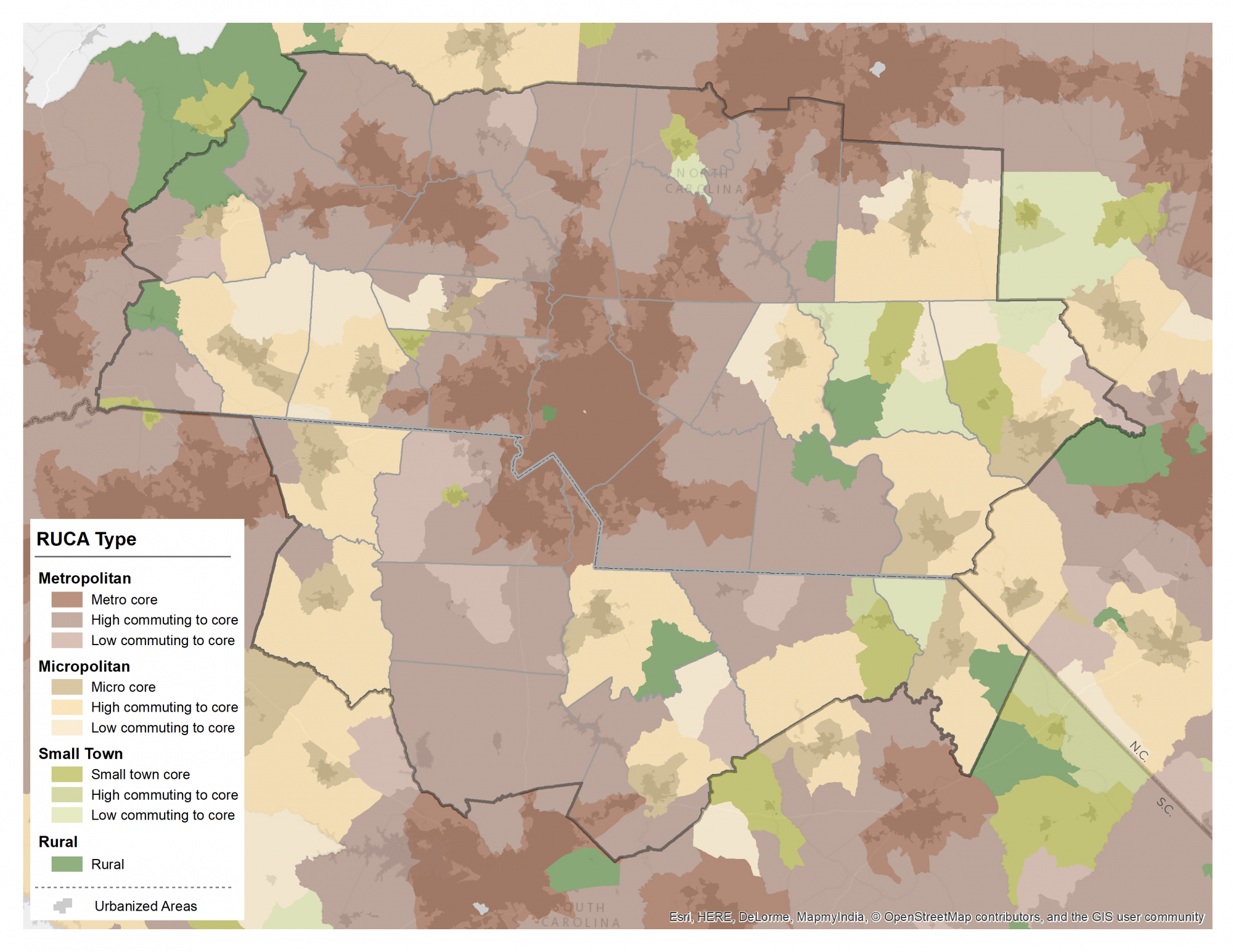 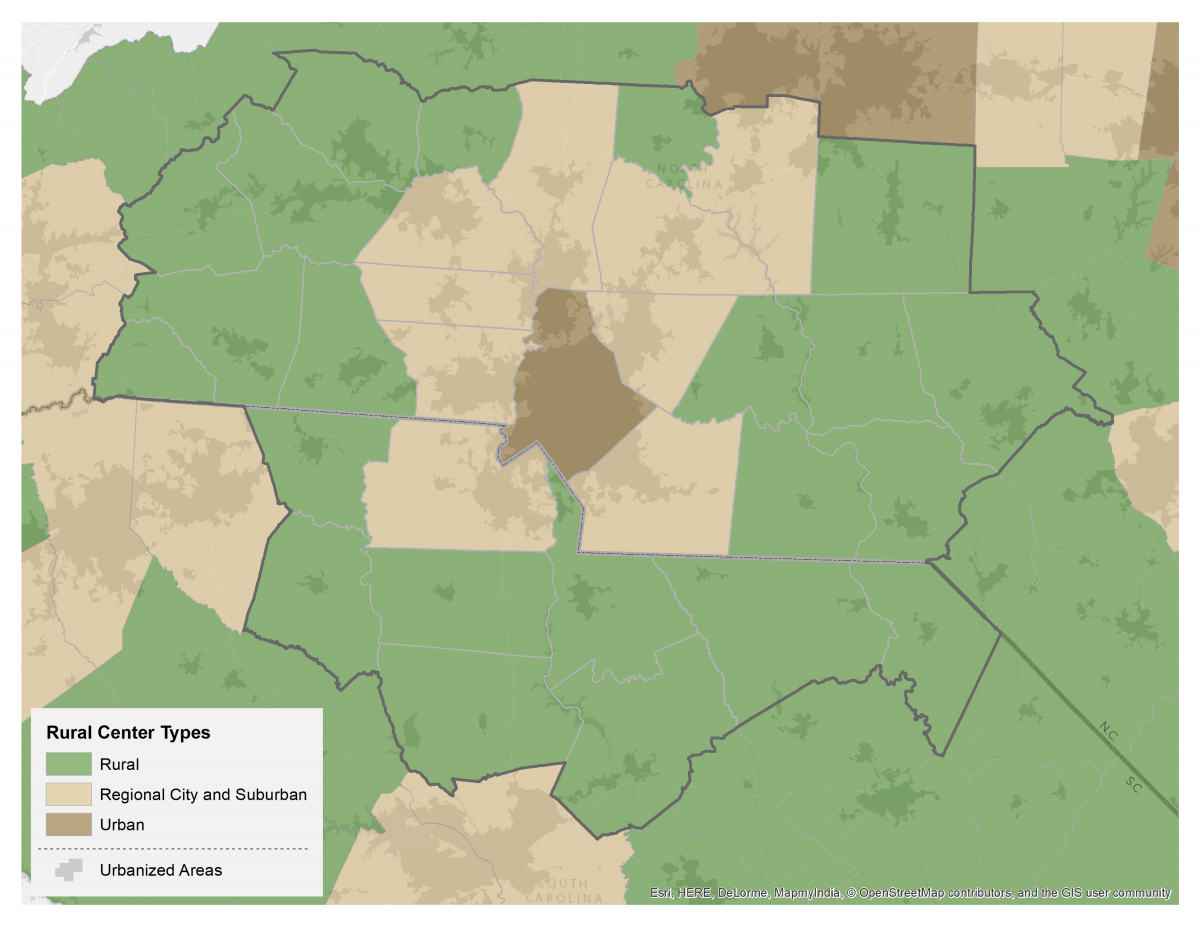 In 2005, a scholar at the University of Illinois (Andrew Isserman) proposed a new county-based typology consisting of four categories, based on: population density, the share of the population living in urban areas (as defined by the Census), and the presence and size of those urban areas.

Rural counties are those with a population density of less than 500 people-per-square-mile (ppsm), 90 percent of their population in rural areas, and no urban area of 10,000 people. Eight counties in the 32-county region meet these criteria for rural. Together, they account for 24 percent of the region’s land area but only 7 percent of its population.

Urban counties are those with a population density of at least 500 ppsm, at least 90 percent of the population in urban areas, and at least 50,000 people living in the urbanized areas. Mecklenburg County is the only county in the 32-county region that meets the criteria for urban. 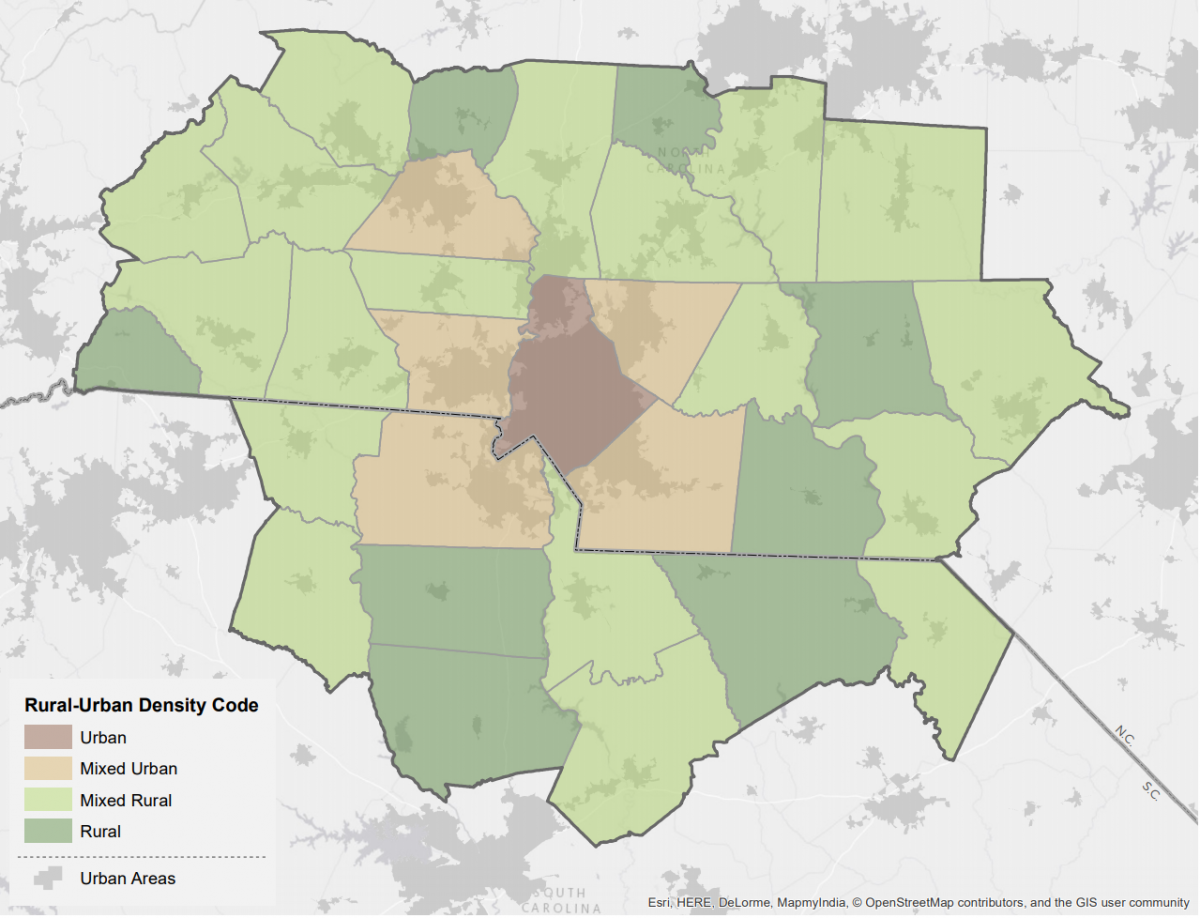