500 Million Years To Create Such Gentleness 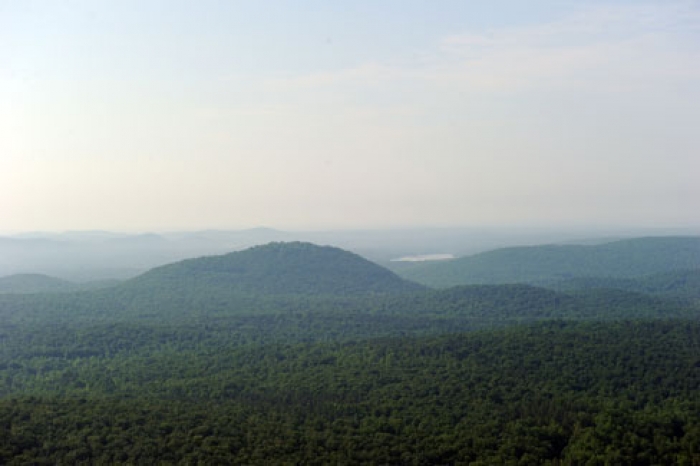 “They come from Tennessee in a covered wagon.”  That was all I could get out of my grandfather..." So begins this essay by Ruth Ann Grissom, first published in 1998 in the newsletter of The LandTrust for Central NC.

Guest contributor Ruth Ann Grissom is a freelance writer who splits her time between Atlanta and the Uwharries.  We will occasionally republish articles that she has written for the The Montgomery Herald in Troy about the Piedmont’s natural heritage.  This article, first published in 1998 in the newsletter of The LandTrust for Central NC, serves as an introduction to Ruth Ann and how she came about her love for the Uwharrie Mountains, on the eastern edge of the Charlotte region.

“They come from Tennessee in a covered wagon.” That was all I could get out of my grandfather when I asked, “Where did the Grissoms come from?”  Most people leaving Tennessee in the middle of the 19th century went west.  A few Grissoms did strike out for Texas, but not my immediate kin.  Resisting the promise of Manifest Destiny, they headed back east to a farm in the Uwharrie Mountains, originally a land grant from the state in 1801.  What a compliment to this humble piece of land on the Montgomery-Randolph county line that my family moved here against a national obsession. 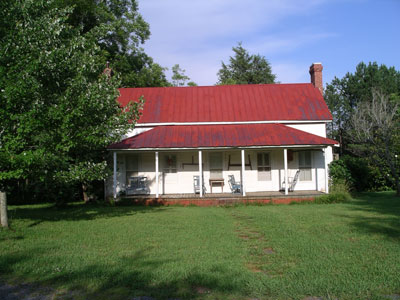 The view from the front porch of the old farm house shows me they’d have been hard-pressed to find any place better than this.  We sit on a ridge.  Not a high one, but a ridge nonetheless.  Behind the house, the ground dips to a branch and then up and down again to Duncombe Creek.  Looking southwest from the front porch, a pasture slithers toward a forest broken only by fields until it reaches the Uwharrie River.  Round Mountain fixes the horizon near Ophir.  The flat ridges that lie beyond it are so distant they’re almost pale as sky.  The landscape here is so subtle, so quietly beautiful, its uniqueness is easy to overlook.

This was a working farm when my sister, Amy, and I were children.  My grandfather, named Lafayette but always called Fate, inherited the land from his parents and grew corn, wheat and soybeans.  Dad had a full-time job in construction, but helped him evenings and weekends and continued to farm by himself for a few years after my grandfather died in 1981.  Although that left little time for family vacations, we did get to know our land.  On nice Sunday afternoons in the spring and fall, we went on outings.  I don’t remember any particular purpose or destination.  We simply went for a walk in the woods.  One of our favorite activities in spring was to scratch in the dead leaves for wild ginger blooms.  They’re odd things as flowers go, tiny petals at the tip of what a botanist would call a calyx.  We called them little jugs because they looked like the old salt-glazed urns from Seagrove my family used on the farm.

We ventured farther from home in the oldest vehicle we owned at the time:  a ’66 Bronco or a ’63 Fairlane.  Our first stop was often Jumping Off Rock on the Flint Hill Church Road.  There, Barnes Creek, one of only two creeks in the Piedmont designated as outstanding resource water, creates a miniature river gorge.  It races over rocks, finding the lowest point between the steep hills.

We talked about Jumping Off Rock and its legends as we drove every back road between Ophir, Abner, Callicut’s Chapel and the Pisgah Covered Bridge.  Did a big buck’s hoof really make that hole in the rock as he jumped?  Did a bunch of guys really push a car full of bootleg liquor over the edge?  In the end, the stories mattered more than the truth.

A big rain always prompted a trip to the Low Water Bridge.  We were rarely the only ones there.  Everyone came to look at the water, measure it against some mark and talk about when it had been higher, faster or muddier.  There was always speculation about how long the bridge might remain in this limbo state and if its oak timbers would survive another flood.

Now on weekends, my husband, Marcus, dedicates himself to various projects:  painting the tin roof of the farm house, planting heirloom varieties of apples and pears in the orchard or shoring up a side of the barn.  Other than offering moral support, I can’t claim to help him much.  Mama and I spend a lot of time in the woods looking for wildflowers and birds.  We’re a good team.  I’m quick to see movement high in the trees, but she spots plants I might have passed by or stepped on.  That’s because she always keeps an eye out for snakes. 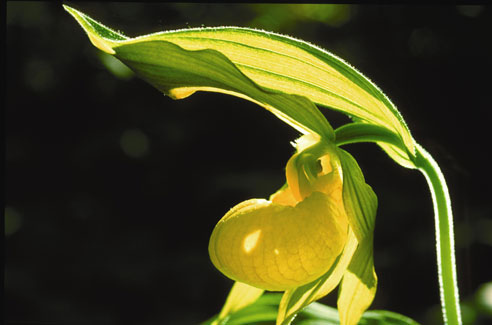 One morning last May, the song of the black-throated blue warbler pulled us from our usual route.  We left the trail and picked our way through the undergrowth and around the trees.  I stopped short at a clump of yellow flowers well past their peak, but still distinctive by their foliage and whirl-a-gig side petals.  “Mama, it’s a yellow lady’s slipper,” I said, when I caught my breath.  “Here, on our land.”  Although these orchids are found throughout the North Carolina mountains, they’re uncommon in the Piedmont.  They reminded me that we live in what many geologists believe is the heart of an ancient mountain range.  The Uwharries aren’t spectacular like the middle-aged Appalachians or the infant Rockies, but the impressive thing is this:  the 500 million years it took to create such gentleness.

Earlier in the spring we had discovered some initials carved on a large beech tree just up the hill where Burgess Spring flows into Duncombe Creek.  Those belonging to my dad and his parents were there.  My grandfather’s older brother, obviously not content with initials, carved his nickname, Hack, in several places.  I took my dad’s 80-year-old cousin, Jewell Saunders, to see the tree.  I hoped she might be able to solve the mystery of the letters W.C.S.  She lives on family land adjoining us, and we walked through the woods from her house.  She remembered drinking that spring water during breaks from field work when she was young, but she couldn’t put a name to W.C.S.

My ancestors, a rare orchid and an old beech tree are only a few of the things that tell me this land is special.  At some level, it’s something I’ve always known but didn’t fully understand until I went away.  Marcus and I lived in New York City for five years.  Central Park and the New York Botanical Garden in the Bronx kept me sane.  Now we live in Charlotte and I see development gobbling up farms like ours.  Even small cities like Asheboro are creeping toward the country.  It makes me uneasy about what might happen to our land.  When I learned about the LandTrust for Central North Carolina I was relieved that someone else shared my concerns.  I believe people all across our region want to honor their ancestors and preserve their rural way of life.  To do this, my sister and I plan to work with the LandTrust on a conservation easement and hope other landowners in the area will do the same thing.