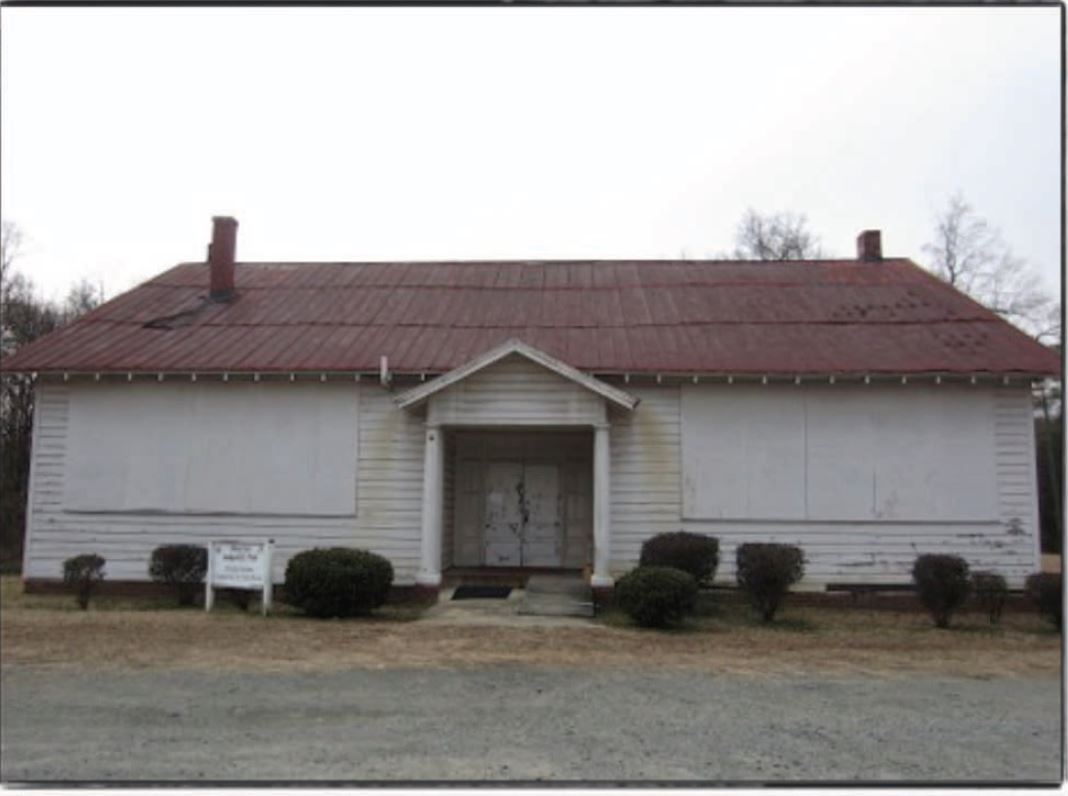 [highlightrule]A handful of these historically significant Mecklenburg buildings survive in conditions ranging from splendid restoration to painful decline. But all are reminders of how grit and hard work, coupled with philanthropy, can create important change. [/highlightrule]

Newell Rosenwald School quietly endures at the end of Torrence Grove Church Road in northeastern Mecklenburg County, its declining exterior showing barely a hint of the promise, hope, and development of the students it housed for decades.

Structurally stable yet showing its age of nearly 90 years, the school is a single-story, four-room, 2,800-square-foot wood structure with a metal roof. Designated a Mecklenburg County historic landmark in 1989, the Newell building is owned by the Silver Set Lodge, a Masonic Order that uses it as a meeting and community gathering space.

Despite its aging appearance and boarded windows, the Newell Rosenwald School is a survivor with a big story to tell. It’s one of seven remaining Rosenwald Schools from an original 24 in Mecklenburg County, all built in the early 20th century in a vast initiative to improve education for Southern, rural  black children.

The story of Rosenwald schools is born of the unlikely partnership among a Jewish retail executive from Chicago, Alabama educator Booker T. Washington, and thousands of low-income black communities throughout the South that with grit and hard work raised money needed to build schools—and a future—for their children.

Only a handful of the Rosenwald schools survive in the Charlotte area, and of those only a few have any historic landmark or National Register protection. The Silver Set Lodge is working to make sure the Newell Rosenwald School—already a designated local landmark—can be restored. In 2014 the lodge and members of the surrounding community established the nonprofit Silver Star Community, Inc., with the mission to restore and preserve the school for future generations.

North Carolina had more Rosenwald Schools built than any other state, with 813 (this total includes a small number of teacher homes and workshops). Mississippi was next with 633, and neighboring South Carolina had 500.

The schools were jointly funded by the Julius Rosenwald Foundation and local community residents. Rosenwald was president of Sears, Roebuck and Company from 1908 to 1922. The Rosenwald Schools served nearly 700,000 rural black children, according to the National Trust for Historic Preservation. By 1928, nearly one in five rural Southern schools was a Rosenwald School, with an estimated one third of rural black schoolchildren in attendance. Most operated until 1954, when the landmark U.S. Supreme Court decision in Brown v. Board of Education ruled against legally enforced school segregation by race.

“Rosenwald schools are one of the most amazing stories in the American history of education,” says local historian and Rosenwald School scholar, Tom Hanchett.  “Today we assume education is the function of the government. The time when this was coming to be was the early 1900s. Because of institutionalized racism in the South, African Americans were not getting their fair share of this new government education. Here is a coalition of blacks and whites, outside of the government, who figure out how to deliver 5,000 school buildings.”

Julius Rosenwald was enlisted to support education for African Americans by Booker T. Washington, the former slave and leader of the historically black Tuskegee Institute in Alabama. An active philanthropist, Rosenwald served on Tuskegee’s board and was impressed with Washington’s work and inspiring message of “self-uplift.”

“Booker T. Washington had this college (Tuskegee) in the middle of the Alabama cotton fields and all around him were kids who couldn’t read or write,” said Hanchett. “There were not schools for the black kids. Washington initially experimented with building their own schools with local community support, yet needed additional funds to expand. Through the use of the then-innovative matching grants concept, Washington convinced Rosenwald to help.”

Over the course of the program, the Rosenwald Foundation contributed $4.3 million, with local communities providing an additional $4.7 million toward the schools.

Twenty-four Rosenwald schools were built in Mecklenburg County according to a searchable database established by Fisk University. Among those on the Fisk list but no longer surviving were schools named Clear Creek, Long Creek, Ben Salem and Rockwell. Some were near churches with the same name. Many more were built in surrounding counties, where at least seven survive.

Dan Morrill, a retired UNC Charlotte history professor and consulting director of the Charlotte-Mecklenburg Historic Landmarks Commission, notes the historical and cultural significance of preserving the area’s Rosenwald Schools: “All cultures are built on story, and it’s from history that we get these stories,” he says.

“Rosenwald schools have a wonderful story to tell,” Morrill says. “It’s a story of giving, that of Julius Rosenwald and the local communities throughout the South. It’s also a story that has heroes, namely Booker T. Washington. It’s also a story with tremendous value in a cultural sense, because the whole idea of these schools was to enhance the educational facilities for African American children and provide opportunity to improve their lives through education.”

Morrill has verified seven surviving buildings among the 24 Mecklenburg Rosenwald schools. His observations:

[highlight]“This school represents the investment made in our community generations ago and is something current members of the community want to see continued.” — Belinda Grier, vice president, Silver Star Community Inc.[/highlight]

Several historic Rosenwald Schools survive in other counties in the Charlotte region:

Hope and promise for Newell

For Belinda Grier, vice president of Silver Star Community Inc., restoring the Newell Rosenwald School speaks to the hope and promise education has for current and future generations.

“This school represents the investment made in our community generations ago and is something current members of the community want to see continued,” said Grier.

The nonprofit is working with the National Trust for Historic Preservation in its effort to restore the school. In 2014, the nonprofit received a matching $2,500 grant from the trust to retain an architectural firm to assess the building, make recommendations and create a restoration plan. The Wells Fargo Foundation also provided a $7,500 grant for assistance in the initial planning.

The original design of the school had an industrial workshop for trade instruction, in addition to the three classrooms. Renovation plans call for this to be recreated with the hope that local youth can once again learn woodworking and carpentry here.

“The plan is recommended in phases,” said Shayvonne Dudley, secretary of Silver Star Community Inc. “The estimate for full restoration is $130,000.”

“There is always the need to inspire young people to take the long journey of education,” says Hanchett. “Entire communities came together because they cared deeply about opportunity for their children, even when that was being blatantly short-changed by the government. These schools represent the legacy of community caring about schools and education.”