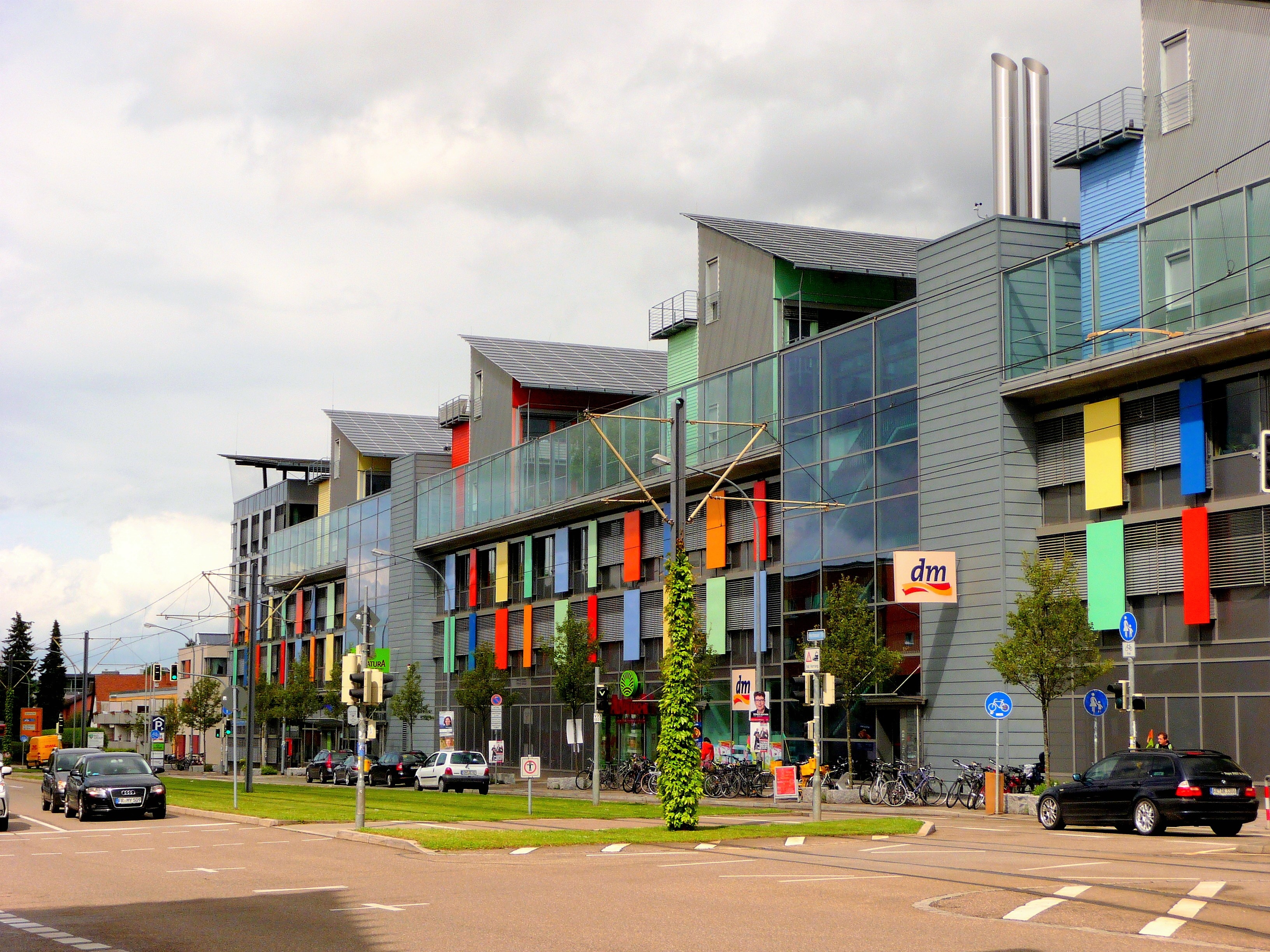 Writing about Vauban, Germany, the renowned eco-district just inside the Freiburg city limits, has been on my wish list for several years, ever since my self-guided tour of trend-setting European models. I was eager to see this famed quartier, formerly a French army encampment, where roof-top solar panels abound, heating bills are astonishingly low, and children ride skate boards and tricycles in the middle of the street.

If you yearn to lower your carbon footprint and improve your quality of life – even in suburbia – there’s lots to be learned here.

The first morning of my visit I hopped onto one of the free bikes available at my hostel and cycled down Merzhauser street alongside the VAG – the electric-powered tram leading to the outskirts of town. After several blocks, I recognized to my left the colorful “Sun City” facade with its Alnatura supermarket at street level and offices above. And above that an array of patio dwellings, each with its own south-facing, solar-paneled roof. Painted on a wall to my immediate right was a whimsical mural with a yellow-skirted pixie and just beyond, the modernist, ivy-laced Green City Hotel. I knew I had arrived.

Freiburg itself is a prosperous and stunningly picturesque town of about 220,000 about 10 miles from the French border. In the 1970s it embarked on a radical shift in self-identity and emerged with a mission to rebrand itself. It has subsequently expanded its economic base by adding eco-industry jobs, advancing public programs to instill an eco-conscious lifestyle for all residents, and engaging in a vigorous marketing program to attract businesses selling energy-conserving products and services. It’s hardly a secret that as many as a thousand public buildings in Freiburg have rooftop solar panels.

As both a “brownfields” and “greenfields” site, Vauban represents a novel blend of new and old suburban development. Vauban’s incarnation began in the early 1990s when counter-culture squatters decamped into the vacant barracks buildings which occupy a small portion of the total quartier. As development progressed, more infill projects were constructed. By 2010, build-out was achieved and population peaked at about 5,500 residents, most of whom live in multistory apartment buildings, many with outward views of the nearby Black Forest or inward to green play spaces, courtyards and communal gardens. To urban planning theorists the overall conception is reminiscent of the Garden City movement of the early 20th century.

The kinship of compact development with transportation that began in the center of Freiburg shortly after World War II has been extended to Vauban. Freiburg’s medieval core (destroyed by the Allied bombing) has been reconstructed as a mostly car-free pedestrian area. Shopping malls have been disallowed on its outskirts, and additional tram lines have been built radiating to city limits. Vauban itself lies only seven stops from Freiburg’s central square with its 13th-century cathedral, the Freiburg Minster, one of the only structures to survive the bombing.

By the time I pedaled past the rebuilt barracks and into the newer housing enclaves, I saw another distinctive aspect: Children were everywhere. Toddlers plopped in parents’ cargo bikes gliding along separated cycle paths, children peering down from home-made tree houses fashioned by recycled timbers or playing hide and seek behind boulders or amid lush vines and scrub brush.

Kids roaming free-range style is by no means a chance phenomenon. It’s a byproduct of a transportation policy framework, including incentives and restrictions, some of which are unique to Vauban. On residential streets, vehicular traffic is limited to pickups and deliveries. Streets are narrower than cul-de-sac American models, and private garages and household driveways have been virtually eliminated. Cars are required to move no faster than a person can walk, as evidenced by the blue traffic-calming logo blocks painted on pavements. What this means is that it’s safe and even liberating for children of any age to assume full command over their environment. And the children of Vauban do just that.

Vauban is not entirely car-free, but it comes close. According to one of the founders, “We didn’t want to be fanatical about the car-free concept. But we wanted to offer people the option of car-free living.” What little long-term parking is allowed can be found mostly in a couple of solar-paneled parking decks on the periphery of the district. Car owners must buy a space and pay a huge premium for the privilege of parking, on par with the cost to purchase a new vehicle.

Incentives for discounted tram rides and memberships in a car-sharing club have helped dramatically reduce auto ownership and travel demand. Metrics may be somewhat dated, but at last count they were impressive: 39 percent of households had car-share memberships and the number of vehicles per 1,000 residents was 160, the lowest level in Germany. In North Carolina in 2015 that same metric was 790 per 1,000.

Vauban’s overall footprint encourages car-free living. The tram line runs longitudinally up the middle, which provides short access by foot to most residences. The rule of thumb for Vauban and Freiburg overall is that no residence should be more than 400 meters (roughly a quarter mile) from a tram stop. Cycling is immensely popular with as many as 60 percent of daily shopping and commuting trips taken by bicycle.

Unlike many Americans, European families generally do not resent living in multistory, mixed-use neighborhoods, even in the suburbs. On average, buildings top off at four stories. That’s consistent with the newer apartment buildings in Charlotte’s booming South End, NoDa and along Central Avenue.

The perception of density can be further mitigated through thoughtful design. You can see from this article’s photos how lush, ground-level shrubbery, trellises and climbing vines can act to give human scale to a large apartment block, and refreshing accent colors and see-through balconies can give life and vitality to an otherwise drab facade. Such devices can also be seen in some of Charlotte’s newer and more promising projects.

Eco-conscious lifestyles are thriving in European neighborhoods, even suburbs, and at standards of living comparable to Charlotte. Vauban clearly demonstrates that meeting the challenges of climate disruption via low-carbon living is possible. It achieves this status in ways that enhance residents’ quality of life while nurturing a family-friendly environment.

But to accomplish this on the scale of Vauban or Freiburg would require culture change on a broad level. And Charlotte is not quite ready for that.

Martin Zimmerman is a frequent contributor to PlanCharlotte on issues of transportation ​equity, smart growth, and low-carbon cities. Opinions here are those of the author and not necessarily those of the UNC Charlotte Urban Institute or the University of North Carolina at Charlotte.