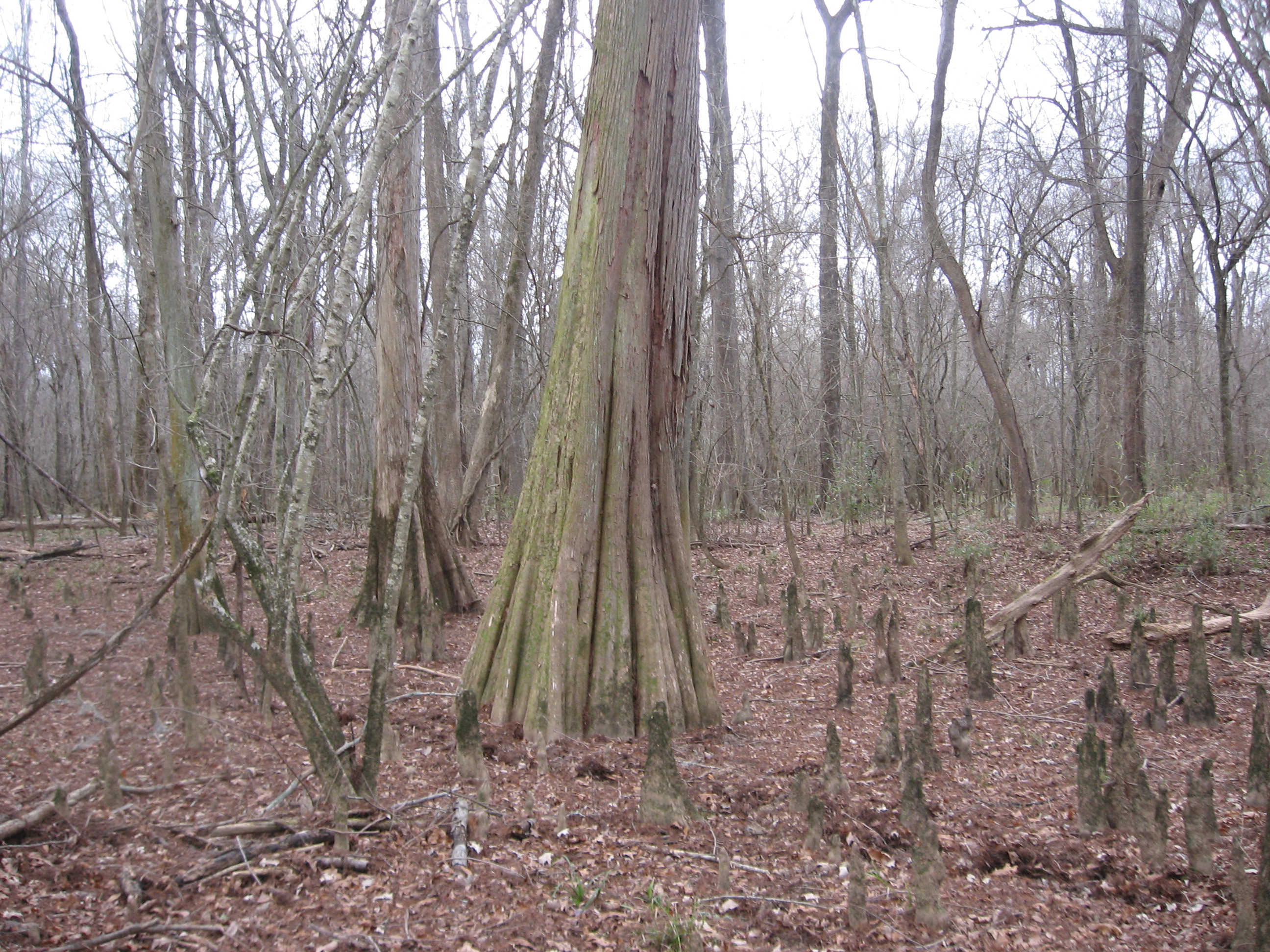 I recently took a trip with the Friends of Plant Conservation on the Black River near Wilmington. The Black River is home to the oldest trees east of the Rocky Mountains. They are bald cypress, which are known to grow to an ancient age. Bald cypress trees have a unique feature known as knees – portions of the tree that grow away from the trunk and stick out of the water. Cypress knees are believed to be important for the structural integrity of the tree to hold it up, and also in gas exchange.

University of Arkansas Professor David Stahle discovered the Black River trees by accident in the 1980s. He was studying old growth tree rings and climate, and found the trees on the Black River. Many are more than 500 years old. The oldest identified tree, scientifically labeled BLK69 and locally known as Methuselah, dates to 364 AD. Some of the trees are probably older, possibly as old as 2,000 years, but core rot prevents their ages from being measured. Some of the trees are more than 8 feet across.

David Stahle spoke after we finished our trip on the river, about why these trees weren’t cut years ago, since the red cypress trees in other areas were cut down. He said yellow cypress trees have more dry rot, and it is hard to log the stands dominated by old trees, and costs so much more that it isn’t worth the effort.

The Black River flows through Sampson, Pender and Bladen counties before emptying in the Cape Fear. The Black River is known for its meanders, oxbows, artesian springs and mature swamp forests. The river is so named for its stained color, like dark tea, which comes from the tannins of decaying vegetation in the river. In 1994 the Black River was designated a North Carolina outstanding resource water, the highest water quality rating given in the state.

The nonprofit Nature Conservancy has worked with partners to protect more than 14,000 acres in the Black River watershed, including the area known as the Three Sisters, where the oldest known stands of bald cypress have been found.

Gov. Roy Cooper signed a bill in July that could lead to a new state park along the Black River. The legislation adds three natural areas to the state park system – Bob’s Creek in McDowell County, Warwick Mill Bay in Robeson County and Salmon Creek in Bertie County. The bill directs the parks division to study the feasibility of acquiring land on the Black River to create a new state park.

We didn’t make it up the river far enough to see the oldest bald cypress trees – that would require a kayak or canoe. We did see several osprey nests and at least three alligators (which makes me think twice about paddling). Stahle mentioned another place where you can go to see old-growth bald cypress and walk on a boardwalk amongst them – the Francis Beidler Forest in South Carolina, near Charleston.

It’s an Audubon Wildlife Sanctuary in Four Holes Swamp. It contains more than 16,000 acres with approximately 1,800 acres of old-growth forest –the largest virgin stand of these trees in the world. Some of its trees are more than 1,000 years old. It has an environmental education center and a 1.75-mile boardwalk through the old-growth portion of the swamp.