Birding along the Uwharrie, without binoculars 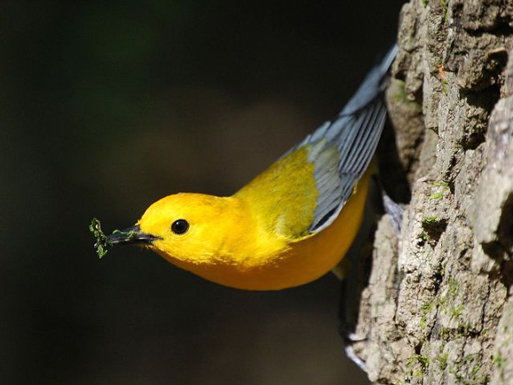 It’s an unfortunate fact of life for birders in the Uwharries – spring migration peaks as trees come into full leaf.  Trying to identify palm-sized birds flitting through the canopy can lead to a serious case of “warbler neck.”  If you like to bird along the Uwharrie River, as I do, you also risk ruining a pair of binoculars, as I have.

On a fine spring morning several years ago, we were drifting down the river in our canoe, distracted by the birds, of course, but also by the fringe trees, mountain laurel and azaleas.  When we bumped against a tree lying in the river, we were slow to respond.  Suddenly, a limb caught the rim of our boat and flipped us.  The rest of the trip was cold and wet, but as we paddled to our take-out point at the Low Water Bridge, I was warmed by the thought of finally having an excuse to upgrade my basic Bushnells.  Now, when I bird along the river, I leave my binoculars at home.  Instead of working so hard to see them, I just kick back and listen.

Most of the songs I recognize come from Birding by Ear and More Birding by Ear, instructional CDs in the Peterson field guide series.  Like a migrating bird, I return to them every spring.  In addition to presenting vocalizations, a narrator offers clever mnemonics and “translations” to give the listener a handle on the calls and songs.  I also appreciate being able to brush up on key species on-line courtesy of the Cornell Lab of Ornithology (www.allaboutbirds.org which includes a bird search page).

For a fairly large bird with a boldly patterned tail, the yellow-billed cuckoo hides remarkably well.  One likes to perch in my parents’ front yard.  Even though we can trace it to a single maple tree, it’s usually impossible to see.  We know it’s there only because of its song, a stuttering series of guttural calls and coos that make the Uwharries sound like a tropical forest.

Other secretive birds spend most of their time near the forest floor.  Kentucky warblers aren’t rare, but they’re rarely seen.  If you want to add it to your life list, you’d better learn its song, a rolling and often-repeated chur-ee, chur-ee, chur-ee.  The ovenbird reminds me of the classroom know-it-all who interrupts with an increasingly urgent teacher, teacher, teacher.  Hooded warblers skulk in tangled undergrowth singing t-weet, t-weet, t-weet-eo (click to hear ovenbird audio).* 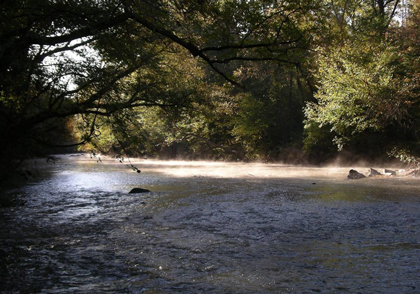 High in the canopy, the black and white warbler sounds like a squeaky wheel turning round and round.  The northern parula’s buzzy trill climbs in pitch and then drops off at the top.  These warblers are joined by red-eyed and yellow-throated vireos.  Their disjointed phrases seem to say here I am, where are you?

The prothonotary warbler sings a straightforward sweet, sweet, sweet, sweet, sweet as it flashes through trees leaning over the river.  Its yellow feathers recall the golden robes worn by the pope’s chief notary, just as our state bird is named for the cardinal’s bright red robes.  If you see this color in the trees during breeding season, listen carefully – it might be one of our tanagers.  Their songs sound like a robin that’s suffering from a sore throat, but their call notes are unique.  The scarlet has a crisp chip-burr and the summer has a rapid pik-ee-tuk-ee-tuk.

Flycatchers are common along the river.  They sally from low limbs, grab a bug in mid-air, and then return to their perch.  Several species look so similar, they have to be identified by habitat and song.  Listen for the Acadian flycatcher’s emphatic pitz-eet and the phoebe’s raspy feed-me.  The pee wee is generally a little farther from the river, in the upland forest, plaintively singing its name.

The woodthrush is a lovely bird – with its spotted white breast and warm brown head and back – but it’s relatively plain compared to its ethereal song, a flute-like eeo-eeo-lay.  This is the song of deep, interior woods.  Hearing one reassures me that large, contiguous tracts of forest remain intact in the Uwharries, well beyond the scrim of trees I can see along the banks of the river.

Top photograph by Liz Odum.  Uwharrie river photograph by Amy Grissom.
*To hear the songs of a wide variety of birds, go to the bird search page at the Cornell Lab of Ornithology. Once you have identified a bird species, scroll down to the audio player under "Typical Voice."