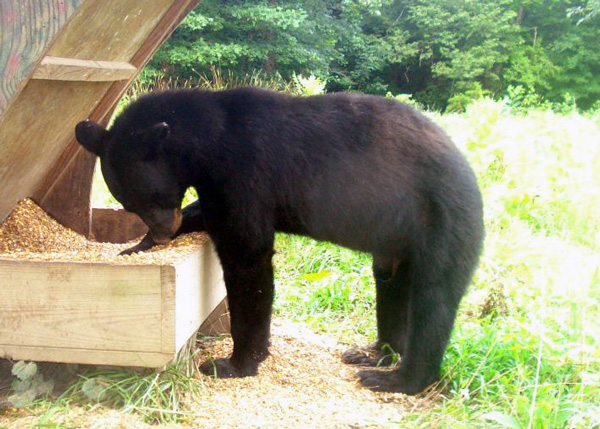 Although bear sightings in the Piedmont are not uncommon, the bears are usually just passing through. However, black bears are gradually expanding their habitat into the Piedmont region, and their range now extends over 60 percent of North Carolina.

Though historically they were found across the state, black bears had very low population numbers in the mid-1900s. The current estimate for the N.C. bear population is 15,000. Over the last 30 years the population has expanded at an estimated rate of 6 percent per year.

Maps of their range show expansion since 1971 from remote areas of the mountains and coast inward to the Piedmont. Unlike deer and wild turkey, black bears were not stocked but have come back naturally. The LandTrust for Central North Carolina has had a couple of black bears on one of our Uwharrie preserves since late last summer.

Why did the black bears decrease after European settlement? Like gray wolves and cougars, early settlers hunted black bears to protect their crops and livestock. Black bears were also hunted for food.

Another factor in the decline of black bears was the blight that destroyed the American chestnut, an important food source for them. Additional loss of other forested habitat also contributed to their decline. Their ideal habitat is large blocks of woodland or swampland with lots of cover, but they can adapt to living near developed areas.

Now that black bear sightings are becoming more common in the Piedmont, the North Carolina Wildlife Resources Commission hosted community meetings and ultimately approved a bear season in the Piedmont in February. This will be effective Aug. 1. Biologists say allowing bears to be hunted bear will help maintain a healthy population. The new regulations also allow hunters to bait with unprocessed food on private land, but they cannot take bears while they are eating.

The state has a Black Bear Management Plan, and allowing hunting in the Piedmont is part of that plan. Even the urban crescent from Charlotte to the Triad to the Triangle contains large undeveloped areas big enough to support bears. The plan calls for a “limited bear population zone” in this central, more urban area, due to the potential for bear-vehicle collisions and bear-human encounters. The strategy includes  monitoring every three years and considering changes as needed.

A few of the counties in their Piedmont management unit in the plan were already included in western and eastern bear seasons, but relatively few bears were taken because the population is so low. The new Piedmont bear season will occur during portions of the deer season, as most bear encounters will be expected to happen with deer hunters.

Currently, the season across N.C. is limited to one bear per hunter per season. The actual time periods during the year that bears can be hunted vary by region, and there are a number of black bear sanctuaries in the state where bear hunting is not permitted.

As both a conservationist and a hunter (though I only hunt deer and squirrel), I understand that hunting can be a good management tool when regulated carefully. Hunters are some of the best conservationists, as they want the resource to remain for future experiences. Though there are undoubtedly challenges, I would like to think that humans and black bears can co-exist in some areas of the Piedmont, and would love the chance to spot one while hiking along a trail. Ultimately, biologists have to weigh all the factors and make the best decisions they can for bears and for people, given the resources available.