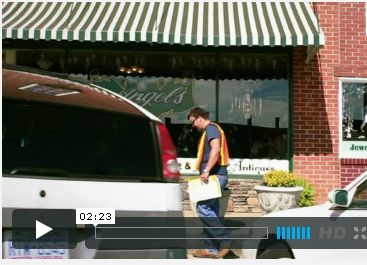 Around the Charlotte region, many downtowns share similar histories: A long-ago heyday followed by decay as dollars and foot traffic flowed to suburban malls and interstate eateries.

A growing list of those places, however, are fighting back, seeking to revive their economies and preserve their histories by joining North Carolina’s Main Street and Small Town Main Street programs. 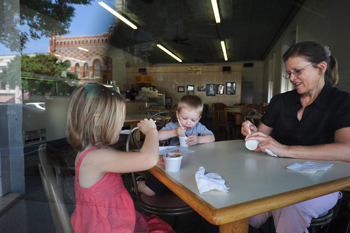 According to program organizers and local participants, the programs aren’t a quick fix but can spur new investment and draw new life to cities and towns that stick with them.

Unlike a cake, which can be declared done after a certain time in the oven, downtown revitalization requires consistent, sustained attention, said Teresa Watts, assistant director of the North Carolina Main Street Center, the arm of the state Department of Commerce that oversees the programs.

“You can never just sit and let it rest,” Watts said.

The programs, which admit municipalities through a competitive application process, don’t provide funding but do help with tasks such as organizing and marketing themselves, analyzing their economies and designing facade renovations, small parks and the like. Those services are free, although participating communities must reimburse the programs for travel and other expenses.

The programs are based on an approach to downtown revitalization developed by the National Trust for Historic Preservation. The approach calls for downtowns to build on existing assets such as cultural and architectural heritage, local businesses and community pride. It focuses on four points: Organization, promotion, design and economic restructuring.

Downtown revitalization can occur without such a program, but it’s likely to be less comprehensive, Watts said.

“Some things might happen, but you’re not getting the total package,” Watts said.

More than a dozen places in Charlotte’s orbit – from Salisbury to Kings Mountain and Catawba to Waxhaw – have participated in the state’s programs.

North Carolina’s Main Street program is for communities that have fewer than 50,000 people and commit to hiring a full-time downtown manager.  It has worked with more than 60 municipalities, selecting new entrants every few years since 1980.

The state’s Small Town Main Street program is for communities of fewer than 7,500 people that lack resources to hire a downtown manager. It has worked with more than 30 municipalities, selecting new entrants each year since 2003. The 2011 class included Bessemer City in Gaston County and Troutman in Iredell County.

The Municipal Association of South Carolina has run a Main Street program since 1985. It has worked with more than 75 communities of various sizes. Current participants include Great Falls and Lancaster.

The Main Street approach is widely hailed, although at least one critic says it could be improved.

Michael Burayidi, who has studied and written about downtown revitalization as chairman of the Department of Urban Planning at Ball State University, said the approach is generally successful but does not go far enough in capitalizing on recent demographic trends that can aid downtowns. 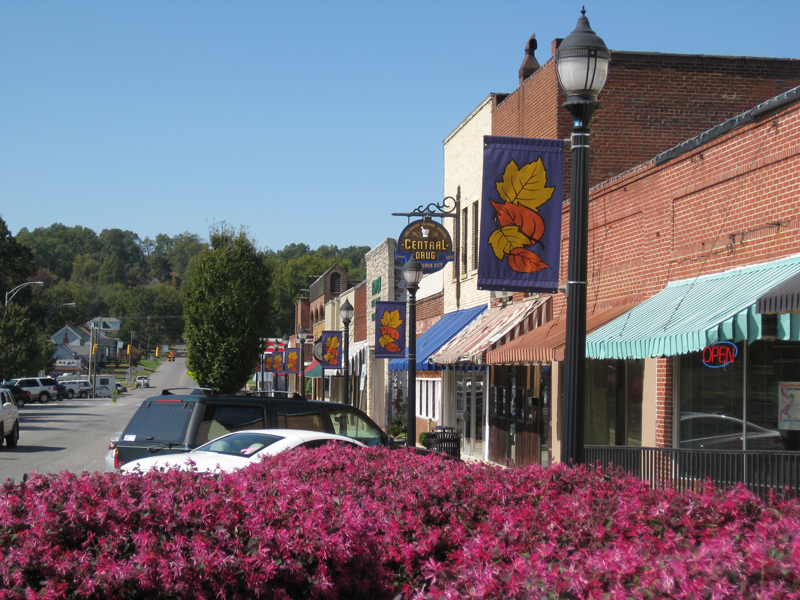 Many communities emphasize organization and promotion, tasks that can be done relatively easily without staff, rather than design and economic restructuring, which can require more professional help, he said.

“We have to look at how to make (the Main Street approach) a lot more dynamic,” he said.

Salisbury is an oft-cited success story.

The Rowan County city of about 33,000 people has lured $117 million in investment and more than 1,000 jobs since 1980, when it became one of the first communities in the state’s Main Street program, according to Randy Hemann, executive director of Downtown Salisbury Inc., a nonprofit organization that boosts the city’s commercial district and uses the Main Street approach.

About half of that investment has come in the past 10 years, Hemann said.

Salisbury, located between Charlotte and Greensboro, has succeeded largely because the community has embraced the cause and come together to complete many of the projects DSI has advocated, Hemann said.

The organization formed in 1980 after businesses began moving to a new mall outside of downtown, leaving vacant storefronts and what Hemann describes as ugly metal facades that covered up elaborate, old brickwork. “There was a desire to fix it,” Hemann said.

Gradually, DSI and its public and private partners have turned things around with a succession of relatively small improvements, he said. Examples include:

The value of property in the Municipal Service District has increased more than 160 percent in the past 14 years. Land there is now valued at about $1 million an acre, making it the most valuable in the county. Only one of downtown’s metal facades remains.

Hemann credits the Main Street approach for much of the renaissance. The program keeps him abreast of legislative issues and grant opportunities, allows him to learn from downtown developers around the state and guides all of DSI’s work, he said.

“I don’t know, without the Main Street approach, that any of this would’ve happened,” Hemann said. “It’s the basic framework for everything.”

The town of Mooresville, which entered the Main Street program in 1988 and is in Iredell County north of Charlotte, provides a slightly less mature example. 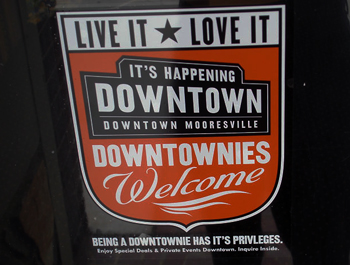 Mooresville, population about 32,000, was historically a textile center and railroad town that has more recently become known as a motorsports hub. Its downtown is concentrated for several blocks along two streets flanking railroad tracks.

Downtown Mooresville, where focus on the Main Street program has ebbed and flowed over the years, recently rededicated itself and has begun to reap results, said Kim Atkins, who became executive director of the nonprofit Mooresville Downtown Commission about four years ago.

In the past three years, investors spent $3.9 million to renovate buildings and opened several new restaurants that have increased foot traffic for merchants, Atkins said.

Atkins, who owned a downtown home accessories and gift store before joining the commission, said the Main Street program offers Mooresville a “road map” to revitalization. She said the program allows her to learn from other downtown developers who have experience tackling common issues.

From the Main Street program, Atkins said, she has learned the importance of a consistent, cohesive advertising campaign such as the black, white and orange signs visible throughout Mooresville’s downtown.

She also has learned how to demonstrate her downtown’s significance with statistics. She is quick to tell outsiders, for example, that Mooresville’s 24-acre commercial core generates about 166 percent more in property tax revenue per acre than a comparably sized big-box store.

Longtime local business owners, some of whom recall being among the last souls on Main Street when they closed up shop in years past, say they are pleased with the direction of their downtown. 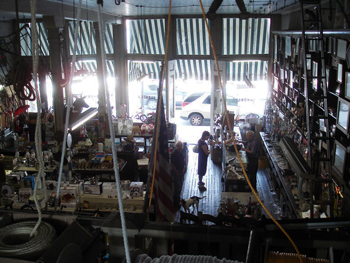 He said downtown Mooresville suffered after Duke Power Co. dammed the Catawba River in the early 1960s, creating Lake Norman and prompting newcomers to flock to lakeside developments and the new shopping centers they spawned.

Since its low point, which Moore estimated came in the 1980s or ’90s, Mooresville’s Main Street seems on the upswing, he said. He’s happy to see new restaurants arriving and people coming downtown for events such as free movies for kids.

In some cases, Mooresville’s downtown is attracting businesses that used to be in outlying business parks or shopping centers, proprietors say. Linda Reese moved her custom window treatment business, Window Wear Design, to Main Street in search of better exposure about two years ago after 16 years at an outlying business park. She has since become the MDC’s secretary.

David Miller, owner of Whit Miller’s Shoe Store & Repair on Main Street and an MDC board member, tries to do his part by welcoming new merchants and referring his customers to other downtown shops.

He said such efforts seem to be key to downtown revitalization.

“To make a Main Street program work, you’ve got to get in and work,” he said.

Bessemer City, which has about 5,300 people and is west of Charlotte in Gaston County, is a newcomer to the Small Town Main Street program.

When Autry sold her horse farm and returned to her hometown about three years ago, it barely resembled the place she recalled from childhood.

Where Autry remembered an idyllic, small downtown with several active mills, a movie theater, two drug stores, two groceries and dress and shoe shops, she found a community that seemed to be reeling from the textile industry’s decline like a family after a house fire. “There were still people trying, but we needed a cheerleader,” she said.

Autry, who couldn’t wait to leave Bessemer City after her high school graduation, came home eager to work for herself after losing her job at a textile company and eager to do good after a battle with cancer.

She bought a building on the city’s main drag, a former hardware store that had closed along with the mills that accounted for much of its business. She transformed the top floor into living quarters for herself and the bottom floor into a business, Angel’s Upscale Sales, that’s part wine bar, part consignment shop and part equine supply emporium.

She also started the nonprofit Bessemer City Merchants Association, which has organized an “Alive after 5” festival and several other events, many of which supported local schools.

Autry’s actions have helped to rekindle energy in the city’s downtown, Krouse said.

City officials also have committed to downtown. Among other actions, they bought a downtown building that’s been renovated and now houses a new senior center, revamped the streetscape of the city’s main thoroughfare, are pursuing a historic district designation that would provide property owners with tax credits for renovations and are funding a grant program to encourage investors to restore downtown building facades.

Autry and Krouse think participating in the Main Street program will continue the momentum.

She imagines a green, well-lit, walkable place that offers all of life’s essentials. Knowing the experts’ conclusions about which types of goods or services are most needed should help downtown’s boosters seek businesses that are likely to succeed, she said.

Krouse imagines a downtown full of residents sipping orangeades in the breeze, and looks forward to a day when parking spots are at a premium. He expects it will take time and effort, however, if Bessemer City is to realize those visions.

“Do you take a magic pill and then, next thing you know, here comes the cavalry? No.” Krouse said. “You have to work at it.”