Can these programs bridge the gap between urban and rural leaders? 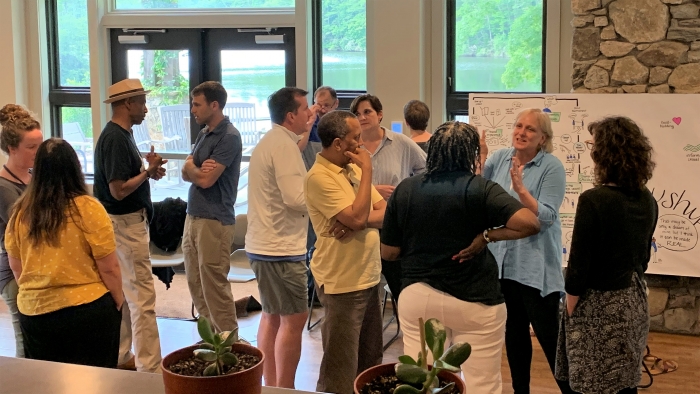 Are rural leaders different than their urban counterparts? And how can programs that develop leaders bridge the gap between them, if indeed there is one?

With leadership emerging as a key issue in research for the Carolinas Urban-Rural Connections project, we asked several leadership programs in the Carolinas about their experiences working with leaders from urban and rural communities. We wanted to know if the perspectives of those they work with are really all that different, and how they build relationships across geographic, cultural and political differences.

While recognizing similarities between urban and rural leaders, people we interviewed said geography plays a powerful role in how leaders define themselves, and highlighted the impact of resource disparities. Stereotypes are often a barrier to urban-rural connections, program leaders said, and they emphasized the importance of place-based learning to overcome preconceptions.  And people running leadership programs are trying to see if they can replicate successes in bridging differences on a larger scale, outside of the artificial environment of a meeting or seminar.

How geography and resources affect leadership

Nearly everyone commented on the different perspectives they observe in leaders depending on where the leaders are from.  The word most-often used to describe this difference was “identity.”  Hunter Corn, director of the Wildacres Leadership Initiative, a statewide program in North Carolina that focuses on bringing leaders together from diverse backgrounds, said identity always manifests itself early among participants, especially for those from rural communities. He called it the “lived place difference,” which is often as powerful as other differences that define identity such as gender, race and ideology.

But what exactly is it about that “lived place difference” that distinguishes how individuals from rural communities and small towns approach leadership? Most of the people we spoke with pointed to the issue of resources.

Corn said that rural fellows participating in his program are quick to say that they don’t have as many resources as their counterparts in urban areas. This sentiment was shared by participants in The Lee Institute’s American Leadership Forum (ALF), which draws from a multi-county region around Charlotte.

[Read more: Is there a leadership deficit in rural communities and small towns?]

Lee Institute president Cyndee Patterson said there’s a “perception that the urban areas have more in the way of resources to solve problems.”

With growing tax bases and expanding philanthropic assets, urban leaders do tend to have more financial resources available to solve community problems. But that resource disparity is experienced in other ways as well.

Resourceful Communities (a program of The Conservation Fund) works to build capacity in rural communities to preserve rural landscapes, and according to its website, to “lift people out of poverty and celebrate . . . communities’ unique cultures.” North Carolina Director Kathleen Marks noted a difference in infrastructure in rural communities - and not roads and utilities.

“There are many great rural leaders, but they don’t have the same opportunities to be engaged;  there is clearly a difference in infrastructure, such as the lack of transportation to participate, places to meet, and institutions to support their work,” said Marks. “Models that work in urban areas may not work in rural communities.”

The NC Rural Center, based in Raleigh, runs one of the longest-operating local leadership development programs. Its Rural Economic Development Institute (REDI) has been bringing together leaders from across the state for three decades. A recent extension of the REDI program, called Homegrown Leaders, focuses on bringing individuals together from a larger geographic area to work collaboratively in addressing regional challenges.

Bronwyn Lucas and Misty Hergett, who oversee the Rural Center’s leadership programs, noticed participants from more populous areas often have more experience organizing and building teams than their rural counterparts. Intimately familiar with the skills and talents of rural leaders, Lucas and Hergett largely attributed this difference to the concentration of corporate offices, centers of higher education, and non-profit institutions in the more urban and suburban areas of the state.

As a result, there are fewer opportunities available to rural leaders for the sort of “team building” and “group problem-solving” exercises that many urban leaders take for granted.

In addition to resources, there are also differences in self-image that rural leaders must contend with as they work to build bridges of opportunity with their urban and suburban counterparts.

As Marks, of Resourceful Communities, noted, “all too often, people think of rural communities as an ‘add-on,’ resulting in real issues of self-image and self-confidence due to the way folks have interacted with them in the past.”

Chrystal Joy, director of The Lee Institute in Charlotte, likens this self-consciousness of rural leaders to the “deficit mindset” that people of color also contend with in leadership circles.

“They work extra hard ‘to show up’ to prove folks wrong, understanding the stereotypes that come with their accents and the perception of rural people not being as smart,” she said. ”So they work harder at learning and showing up with a familiarity of what’s happening.”

Another program that intentionally brings leaders together from urban and rural communities is Leadership North Carolina. President Brian Etheridge has also noticed a difference in how participants from different parts of the state engage in their program.

“(Rural) folks often hold their cards close to the vest, because they feel vulnerable; not sure whether or not they will measure up.”  But when people get familiar at a personal level, he said they experience “a hunger to get to know one another, to connect with one another.”

Can the success of leadership programs be replicated on a larger scale?

Can such programs, or even new initiatives, bridge the urban-rural divide outside of the artificial environments of formal training sessions serving a narrow slice of the population?  It’s a question that many of the programs we examined are wrestling with as they explore how to leverage their growing networks of alumni to maximize their impact.

Most understand their programs create safe “containers” for their participants, where it’s easier to build bonds of trust among diverse groups, that don’t mirror the real world. Leadership consultant Peg Carlson with UNC’s School of Government calls it a “unique opportunity to learn about different perspectives.”

If success is to be replicated, a core element of such an effort will likely be getting people to visit places that are different from what they know. Wildacres’ Hunter Corn calls this “place-based learning,” and they do it by holding their seminars in different parts of the state.

“What are our higher core values that bring us together?”

“It’s not only the experience of being there, but also of driving to those places where fellows see the differences – in culture, time, and experiences,” Corn said. “And that changes their outlook on the way they look at issues facing the state.”

“The biggest benefit is taking our meetings outside of Mecklenburg County,” she said.

Most of the leadership experts we spoke with also feel that urban leaders need to approach such bridge-building efforts with a sense of humility and respect for the attributes of rural communities.

“Create spaces where urban leaders learn to step back,” advised Mikki Sager, the national director of Resourceful Communities.  “If you’re going to create those connections, recognize that there is a lot of wisdom and valuable human assets in rural communities.”

Sager said people should be ready to talk “about the differences without denigrating the population” in rural communities.

The Lee Institute’s Cynde Patterson agreed: “Can this happen outside of a leadership program?  I think so. In public life, we operate from a deficit model, but Charlotte cannot be self-sustaining without the region.”

However we do it, though, Patterson said we have to begin by asking: “What are our higher core values that bring us together?”