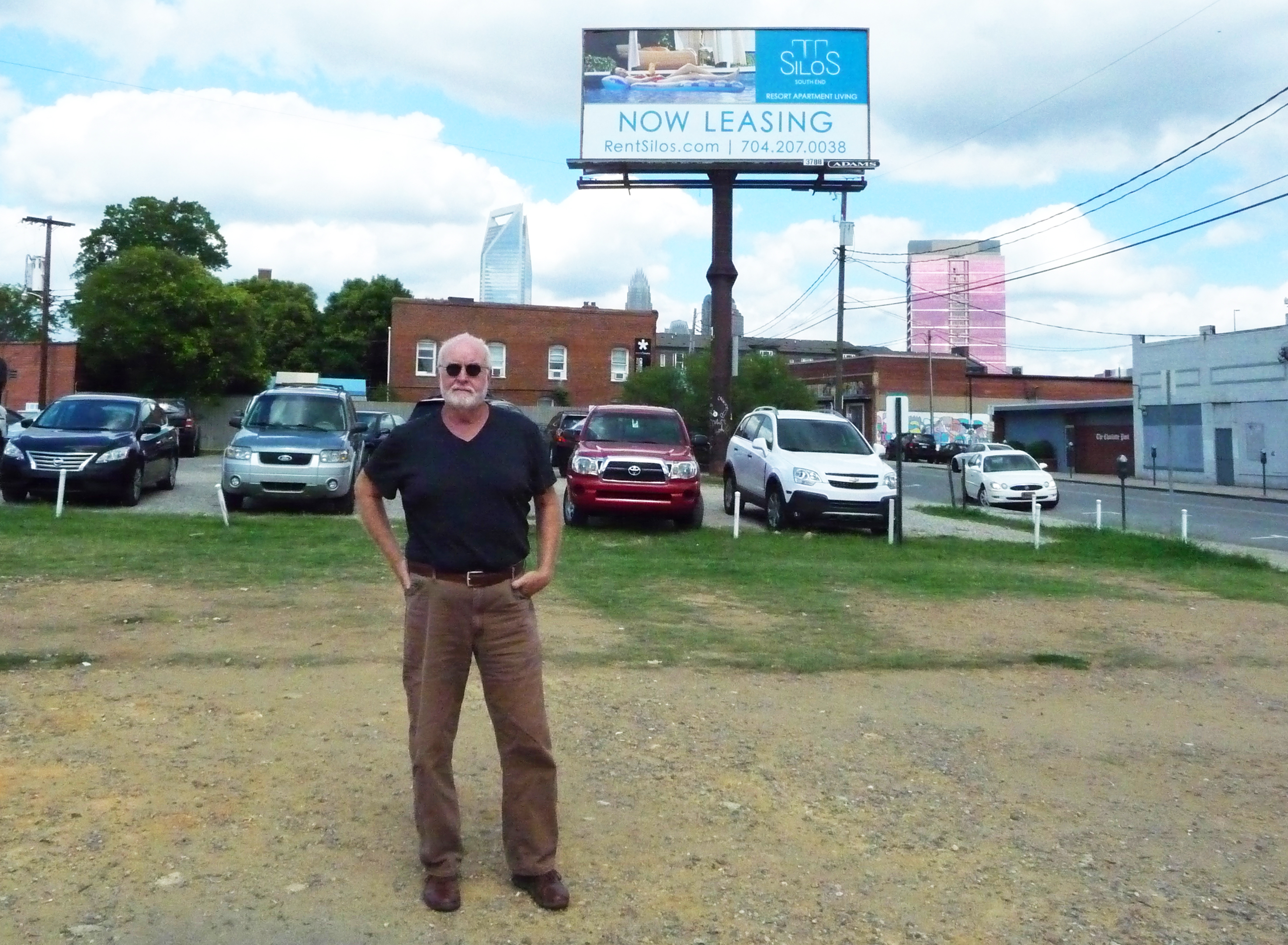 [highlightrule]As an important block on Camden Road faces likely development, its recent history tells a complex narrative of a once-derelict area and a man with a vision, and shows how success changes a neighborhood.[/highlightrule]

Recent news that one of the last remaining sites in Charlotte’s South End is scheduled for high-density redevelopment should come as no surprise. The real surprise is why it has it taken so long for the site—a triangle formed by South Tryon Street, Camden Road and East Park Avenue—to go the way of so many other nearby properties.

But because this proposed redevelopment means the move or possible loss of some delightfully funky urban nodes such as Common Market and Food Truck Friday, public discontent has been brewing. People are bemoaning the gentrification process that seems to destroy the very things that make a place attractive.

While the potential loss of those popular venues is real, this is not the simple story of heartless landlords and greedy developers that you might expect. Instead it is a fascinating yet complex parable of property values, a neighborhood on the upswing, and an owner who is anything but the cold-hearted land speculator envisioned by those who don’t know the area’s history.

The story starts more than 30 years ago when Gaines Brown, a young graphic designer, Vietnam veteran and graduate of UNC Charlotte’s art program, set up his exhibition design business in 1983 in a long-abandoned building he bought on South Tryon Street. During the next seven years, Brown bought other old buildings and empty sites on the block as they became available until he owned most of the block.

He did it with sweat equity and hard work, because uptown banks refused to loan money. The area was considered a dangerous urban wasteland. Bankers didn’t even get out of their cars. And it was a depressing place: a few old buildings and some light industrial sheds sitting amid empty sites and disused buildings. Razor wire was everywhere. Drug deals went down on street corners. Homeless people slept in doorways.

But Brown had a vision, spurred by visiting the Torpedo Art Factory in Alexandria, Va., in 1969 on his way to Vietnam. That example—an old munitions building transformed into a community arts center with studio spaces and galleries—stayed with Brown for two decades, and as he assembled old buildings around his design workshop he sought out local artists and creative businesses who needed affordable rents and could transform the area into a local arts hub. (Disclosure: I and my wife, artist Linda Luise Brown, have rented studio space on Camden Road from Gaines Brown since fall 1990.)

The 1990s saw several major initiatives for the area that helped create today’s South End. Most important was the evolution of the historic Charlotte Trolley as precursor to the Lynx Blue Line light rail. The old Charlotte streetcar 85 was found in rural Huntersville in 1987. Owned by Daisy Mae Trapp Moore, it had been used as a dwelling. With the help of historian Dan Morrill and other local businesses, the streetcar was renovated and eventually taken to Atherton Mill in 1993, where its first tentative trips were limited to 300 feet of extension power cord. 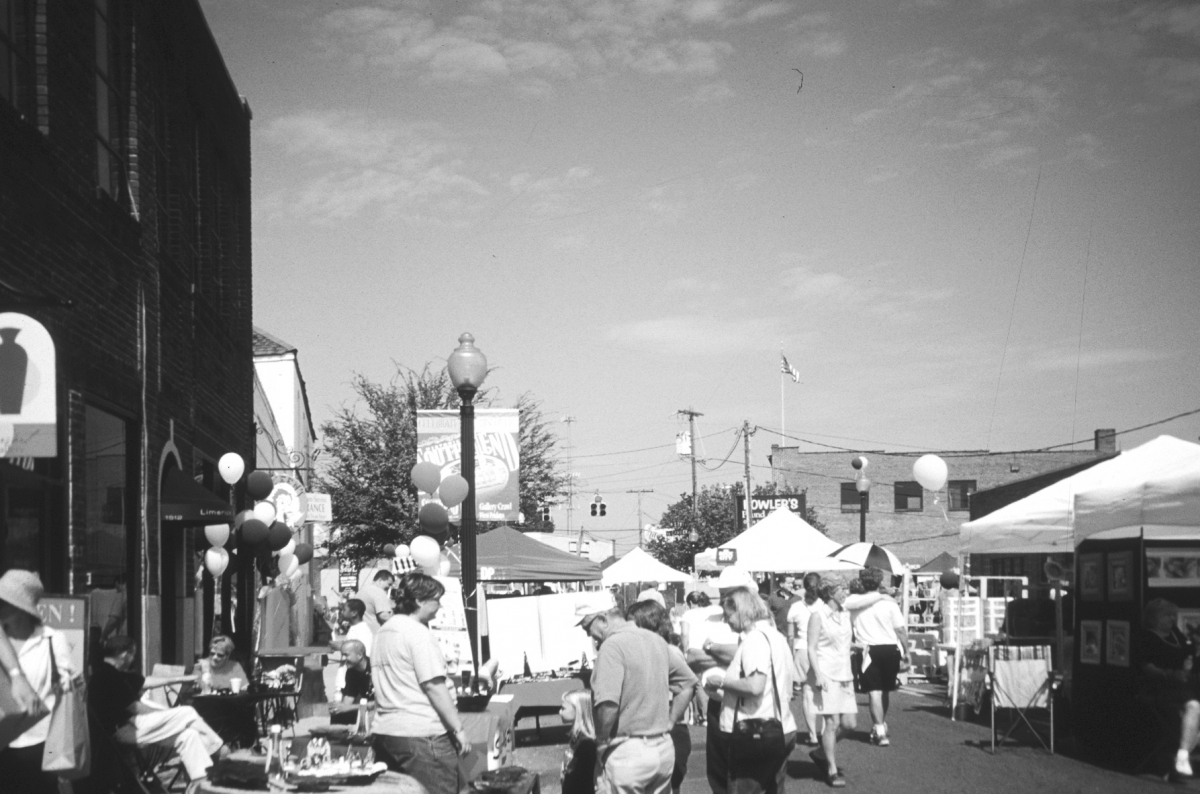 As president of the nonprofit Charlotte Trolley Inc., Brown pitched a vision to Charlotte business and civic leaders, following Morrill’s advice that history was a great way to market a new product. The trolley enthusiasts envisioned streetcars running north-south to uptown and east-west between Johnson C. Smith University and Central Piedmont Community College. Hugh McColl, then CEO of NationsBank (later Bank of America), was impressed and gave financial backing to the early project. With great fanfare in 1996, and powered by a wheeled generator, the historic streetcar began short excursion rides, rolling north from Atherton Mill to the edge of I-277 and back again.

Brown and others used the historic trolley car as a fun way to introduce the South End area to the city as a whole and to change people’s perception of it into a destination of fun, art and entertainment. The trolley ran weekends for six years, carrying thousands, and building enthusiasm for the future light rail. Trolley service ended in 2002 to allow construction of the new light rail track.

During those years the area became known as South End, a term created by local developer Tony Pressley, architect Terry Shook and others. Visiting Dallas, Texas, they saw its West End, an area of warehouses turned into an arts and entertainment district, and they rode the McKinney Street Trolley. They dubbed Charlotte’s area “South End.”  Pressley transformed old knitting mills along Camden Road into a Design Center. Brown’s artsy block was at the other end of Camden. There, for three years during the early 1990s, Brown organized the “Art and Soul” of South End, a music and arts festival on Camden with artists in booths, music stages and kids’ entertainments. Those street fairs convinced a skeptical public that South End was a safe, trendy place to see art and have fun.

[highlight]During the early South End gallery crawls, as often happens in Charlotte, patrons came and drank but bought little art. The galleries and a neighborhood coffee shop could not survive, even with Brown’s rent subsidies.[/highlight]

Meantime, Brown and his partner Johnice Stanislawski hosted 42 continuous months of gallery crawls on his block of Camden Road, featuring local artists and musicians. But as often happens in Charlotte, patrons came and drank but bought little art, and galleries and the Queen’s Beans neighborhood coffee shop could not survive, even with Brown’s rent subsidies. Brown re-leased the space to young tech firms, because old buildings offer affordability for start-ups. Yet an essential component of his art-based vision had suffered a blow.

The two most recent elements of Brown’s locally focused market strategy have been key to creating South End’s “shabby-chic” vibe: opening Common Market’s second location on April Fool’s Day 2008 in what was Brown’s original design workshop, and initiating Food Truck Friday in March 2012, beginning with only three trucks (and technically in violation of the city ordinance for food trucks). For the first year Brown let truck operators use the land at no charge. He charged $25 in 2013. With property taxes and fee payments that cost him $25,000 for the empty gravel and grass lot, he has since raised fees since to keep pace.

Thirty-two years after Brown’s initial building purchase, those once “dangerous urban wastelands” along a rusting rail line are packed with new businesses and apartments, breweries and restaurants.

When he purchased property in the 1980s, Brown says, he thought he and others could turn the area around in 10 years. It has taken three times that. But in other ways his vision was prescient. He saw businesses leaving uptown, to Park Road Shopping Center in the 1950s and to SouthPark mall in the 1970s. He believed the city’s preferred direction of development was south, and he envisioned a hub of creative enterprises within that larger geographic and demographic shift.

Developers who did not share that early prescience have lusted after Brown’s property for years, only to be rebuffed as he held to his vision of a grassroots creative district centered on artist studios, live/work units and small businesses. Before the economic bust of 2008, Brown worked on a development plan to build condominiums and a parking deck on today’s food truck lot. That plan would have left the existing buildings and studios intact and added ground-level shops and galleries. But the financial crash stalled development, and the plan was not resuscitated.

Now change is likely for the whole block. News reports in the Charlotte Business Journal and in Creative Loafing say investment and capital management specialists Dimensional Fund Advisors are moving from Texas to Charlotte and have teamed with Cousins Properties of Atlanta to build a headquarters here. 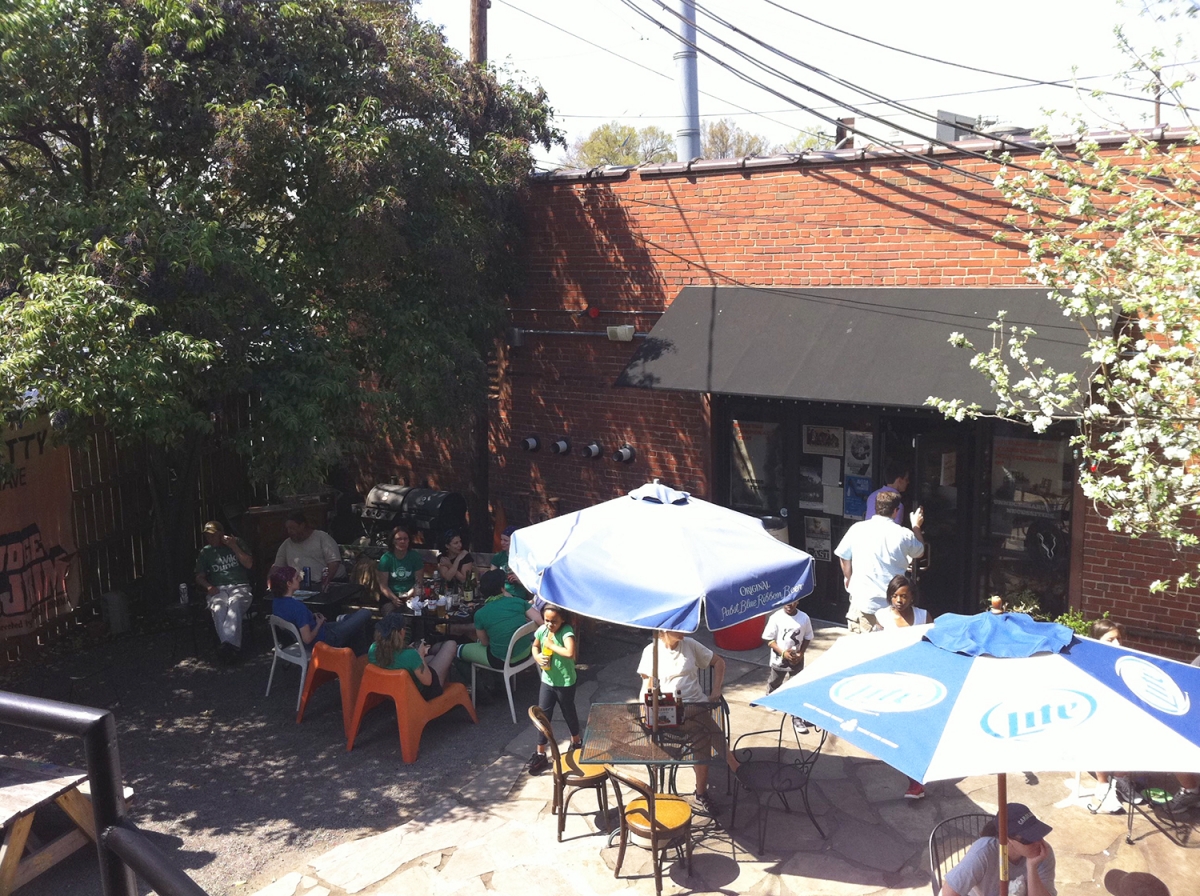 Details are not yet available but the development is likely to cover most of the block, incorporate a parking deck screened from the street, with spaces available to retail businesses on Camden Road. (Insufficient parking has plagued the area for years.) Cousins developed uptown’s Gateway Village for Bank of America, and the architects of that project, Durham-based Duda Paine, have been chosen to design the Camden Road building.

Why sell now? Brown says he’s near retirement age and wants more time to pursue his passions in art (he is a talented blacksmith), rather than keep managing property. He was impressed, he says, with the design quality, the development team and their ability to produce a building of lasting value to the district. And a large parking deck would be a long-term solution to South End’s increasing parking problem.

However well done a new development may be, it signals the end of Gaines Brown’s three decades of work as a community-based entrepreneur. And it closes this recent chapter in South End’s development history.

But cities are built on change. The introduction of high-quality office space to South End will be a long-overdue counterpoint to the frantic apartment construction of recent years. In urban design jargon, a “jobs-housing balance” is crucial to sustainable urban futures.

Brown’s most lasting legacy may be to have enabled a longer lasting, sustainable future for the South End area. It won’t be the same funky art and skateboard neighborhood that many love, but it will be a thriving city district that 30 years ago was a slum.

Artists, small business owners, skateboarders, and entrepreneurs —the Gaines Browns of today—will find other locations, with undervalued old buildings that can host new ideas. Indeed, as the “shock troops” of urban regeneration, that’s their job: to open the public’s eyes to new opportunities in today’s discarded parts of the city.

David Walters is an architect and town planner, a UNC Charlotte professor emeritus who recently retired as director of the university’s Master of Urban Design program.

Opinions in this article are not necessarily those of the UNC Charlotte Urban Institute, its staff, or the University of North Carolina at Charlotte.