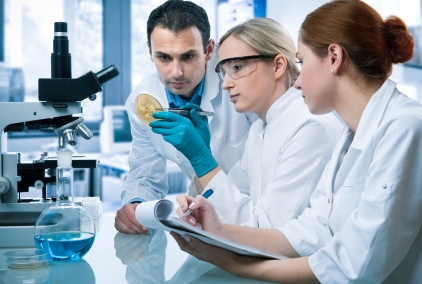 Friday, January 21, 2011
Luck Comes to Those Who Are Prepared
Marjorie Benbow

The emergence of the biotechnology sector was not due to luck, rather it was due to vision, the ability to see the invisible and do the impossible.  Our state prepared for success by investing in roads, K-12 education, community colleges, universities, research, innovation, business parks and biotechnology agencies (e.g. BioNetwork, NC Biotechnology Center and the North Carolina Research Campus).

And kudos to North Carolina and to the Charlotte region for achieving positive results.  The Battelle Technology Partnership Practice reviewed North Carolina’s biotechnology economy in 2008 and 2010.  The findings (see table) indicate healthy growth in the sector statewide.  Second only to Massachusetts, North Carolina biotechnology growth outpaced California, Florida, Indiana, New Jersey, Pennsylvania, Texas, New York and Illinois.  Charlotte’s biotechnology sector is growing as well.  Eight years ago, there were ten companies identified in the biotechnology cluster; today, just over 400 companies.  The Charlotte Chamber’s broader bioscience asset inventory identified 759 firms in the region associated with the fields of medical devices and equipment; research, testing medical labs; drugs and pharmaceuticals; agriculture, feedstock, and chemicals; and bioscience related services.  The Charlotte Regional Partnership indicates that there are more than 10,000 researchers, technicians and biomedical device manufacturers employed in health/life sciences and biotechnology in the Charlotte region.

Despite this success, the visibility of the Charlotte biotechnology cluster is not as prominent as I would hope.  For example, my international biotechnology colleagues coming to the region might say, “We love the Charlotte, Northsouth Carolina somewhere between Washington DC and Disneyworland – you guys have Research Triangle Park and Michael Jordan.  No?”  To which I smile and respond, “I’ll pick you up at the Charlotte Douglas International Airport and maybe we will see a tall, handsome basketball player.”

In science, connecting with the brightest minds is a necessary ingredient for the spark of innovation, the spirit of collaboration and the foundation of discovery.  Even before the economy was so interwoven, scientists convened to foster collaboration, ignite innovation and forge ahead in discovery.  Thomas Jefferson captured the benefit of convening scientists when he wrote, “He who receives an idea from me, receives instruction himself without lessening mine, as he who lights his taper at mine, receives light without darkening mine.”  When scientific minds work together, like the lighted taper, our world brightens.  National and international scientists alike seek our intellectual cache for research partnerships.  These collaborations often lead to investment in our institutions, relocation of star talent and firm relocation and expansion to our region.  The Charlotte Douglas International Airport, the eighth busiest airport in the nation, with 28 international destinations, provides the portal for international life science companies.

In a few weeks, Charlotte will have a unique opportunity to convene with others in the biotechnology cluster from around the world, and to showcase what this region has to offer.  From February 7 – 10, 2011, 4000 industry representatives from the chemical industry will arrive via planes, trains and automobiles in Charlotte for the Informex Convention.  The attendees are buyers and sellers in a diverse range of chemistry applications including pharmaceuticals, biologics and specialty chemicals from the U.S. and Canada (70%), and abroad (30%).

Such a conference has two types of economic impact: short term and long term.  In the short term, the Charlotte Regional Visitors Authority estimates the conference should generate a $5.6 million economic impact (e.g. lodging, food, transportation, shopping and taxes).  However the long-term impact is less quantifiable.  According to Ronnie Bryant of the Charlotte Regional Partnership, the convention will also raise the visibility of our life science cluster.  While attendees may be aware that North Carolina is rated the third largest biotechnology cluster in the nation and know there are several hundred chemical companies in the region, they will see and feel our regional economy.  Local suppliers and buyers will be able to make valuable connections and save significant sums of money while doing so.  Scientists may forge collaborations.   Instead of economic developers having to travel to the nearly 40 countries that will be represented at the conference, economic developers will be able to travel the world in three days to plant the seed of a future relocation or expansion.  The savvy economic developer will be armed with a recently released labor market analysis which affirmed that Charlotte’s labor shed could sustain a large biopharmaceutical manufacturing project if one were to come to the region.

After all, it is the wise salesperson, scientist and economic developer that knows luck comes to those who are prepared.

Marjorie Benbow is an attorney at Moretz & Skufca and focuses on technology transfer, licensing, corporate matters and general practice. Previously she managed the intellectual property at UNC Charlotte and later was science and technology officer for N.C.'s fourth largest hospital system and the executive director for the North Carolina Biotechnology Center in the region. Reach her at mtb@moretzandskufca.com.