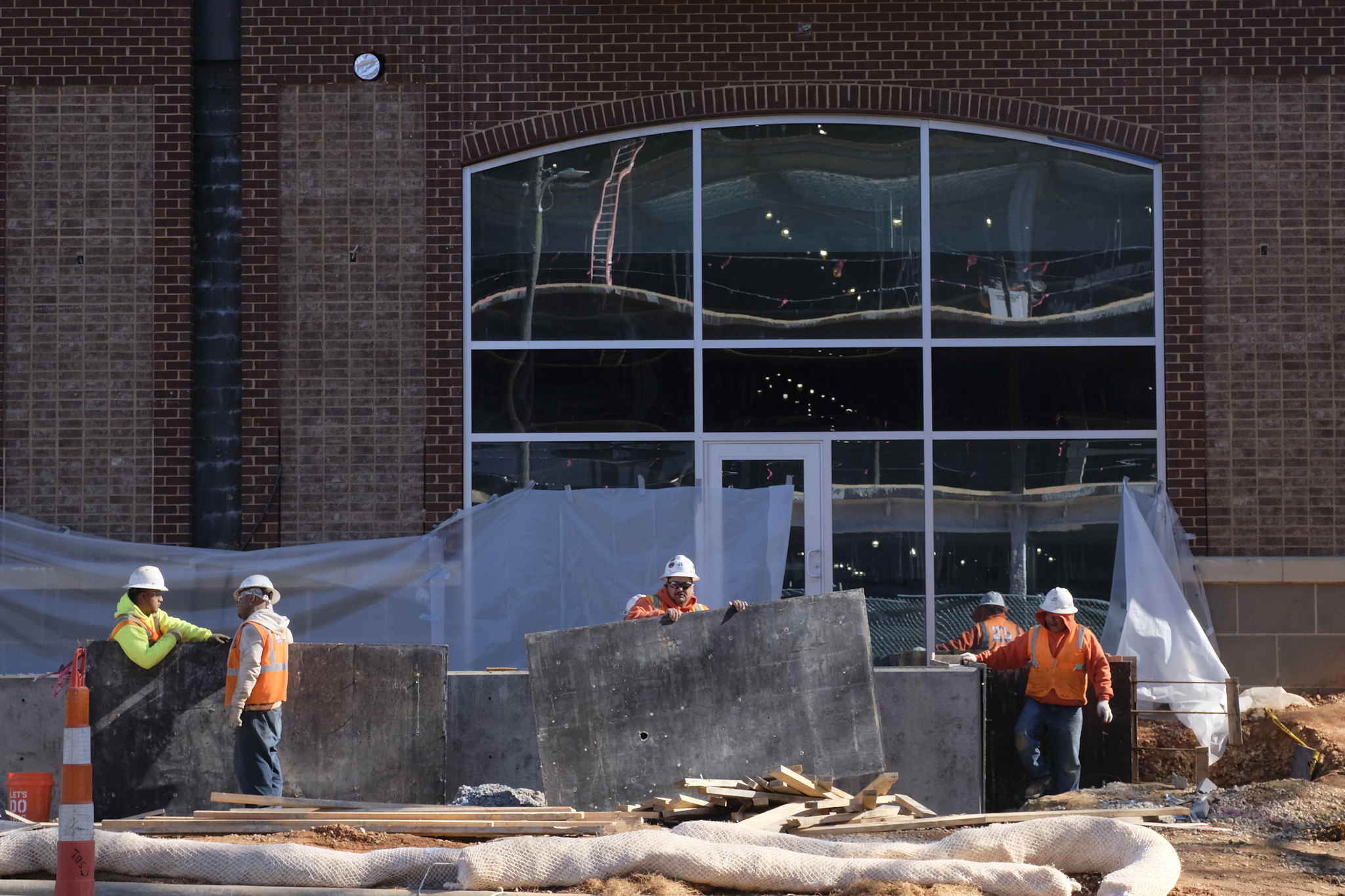 At a work session about the city’s new unified development ordinance this week, Charlotte City Council members repeated several phrases so often they sounded like mantras: Middle ground, finding a balance, and trade-offs.

The ongoing work illustrates the balancing – and sometimes the tension – inherent in translating a high-level document like the Charlotte 2040 Vision Plan approved last year into a concrete set of rules and regulations to guide development for the coming decades. Charlotte officials caution, however, that more changes are sure to follow.

“The idea that this is perfect should be put to the side,” said Charlotte Mayor Vi Lyles.

City Council agreed to push back the UDO’s approval from July to August, with member Tariq Bokhari the lone dissenting vote. The UDO will consolidate and replace a dozen separate sets of outdated and sometimes conflicting regulations, including the city’s zoning code, tree, stormwater and sidewalk rules.

The plan’s overarching goal is to create a denser, more urban, more pedestrian-friendly city with fewer single-family-only areas and less sprawl. The most controversial part of the plan was its elimination of single-family-only zoning, opening neighborhoods across Charlotte to duplexes and triplexes.

But since the vision plan won a 6-5 vote, there’s been less public attention paid to the UDO, which is the policy document that will implement the vision. Monday’s hearing, to discuss changes between the first and second draft, showed how changes in the nitty-gritty rules can influence how the vision is carried out.

Under the first draft, homeowners would have to pay $1,000 for a permit to remove “heritage trees,” or native trees with a diameter greater than 30 inches, and plant a replacement tree. Developers wouldn’t be allowed to remove heritage trees unless there was no reasonable alternative, and would pay the same fees. Dead, diseased and dangerous trees won’t require a permit to remove.

Under the second draft, the heritage tree removal permit for homeowners has been reduced to $500, with $250 further reduction for each additional new tree planted. Developers will be able to remove heritage trees, and though their permit fees are increased to $1,500, they will also receive $250 reductions for each additional tree planted and more “tree save” credit towards preservation requirements. 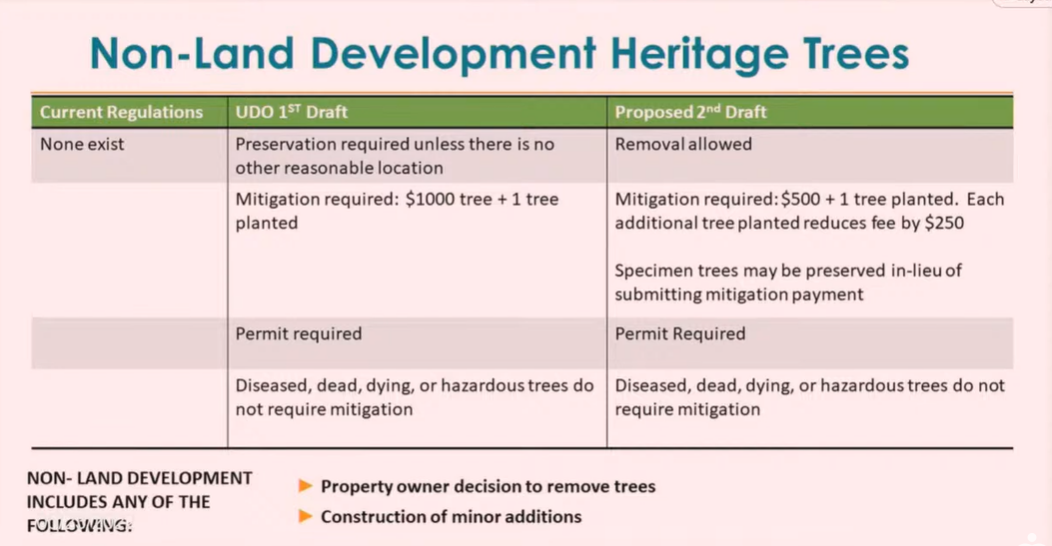 “It really restricted development,” chief urban forester Tim Porter said of the first set of proposed rules. “This is a much greater level of flexibility.”

“That is the tradeoff that we're grappling with here. I think we need to be very clear-eyed about the choices that we're making in resolving that,” said Driggs.

Under the first draft, new buildings would be limited to 65 feet within 200 feet of an existing neighborhood.

Under the revised proposal, new buildings would be limited to 50 feet within 100 feet of an existing neighborhood. Buildings could go to 65 feet for the next 100 feet, then be free to go to the maximum allowed height for the specified zoning district. 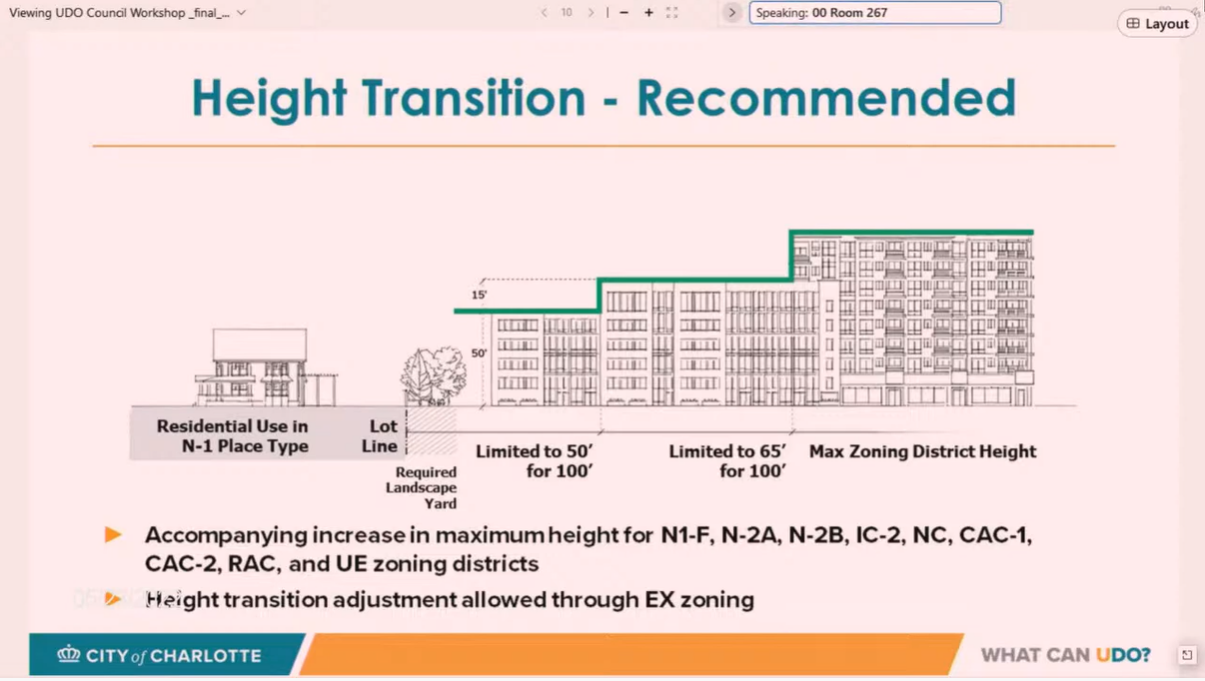 “We can't sacrifice what we're doing to some of these single-family neighborhoods by putting essentially a 65-foot building wall right next to their house,” she said.

As a sprawling, auto-dependent city, Charlotte has long been accustomed to abundant parking, and zoning rules have reflected that. Proposals that would change the minimum amount of required parking are sparking pushback.

City staff are proposing lowering the required amount of parking for new single-family neighborhoods from two spaces to one. Developers would be free to build more parking. Many non-residential uses would move from requiring one parking space for every 500 square feet of floor area to one space for every for every 750 square feet.

Council members said they fear more cars will spill onto residential streets. Several said they would find it difficult to support the plan with the parking requirements as proposed.

“This is very abrupt and I think it could become a mess,” said council member Matt Newton. “I struggle with this and I feel like it's going to be very hard for me to support provisions that continue to slash parking.” 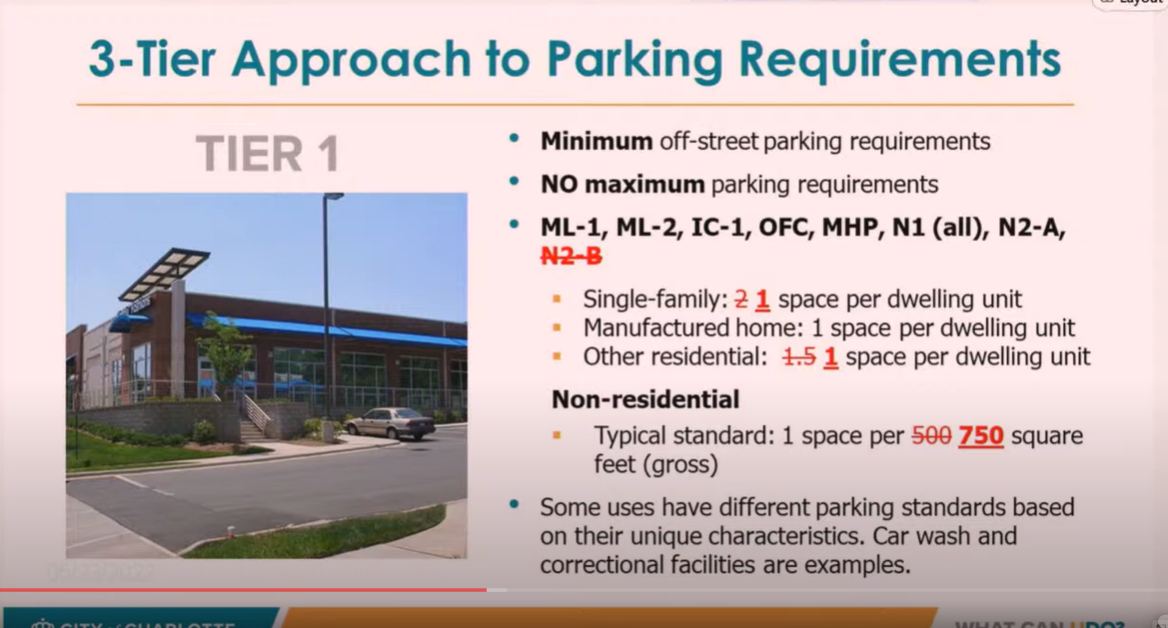 The proposed regulations would also require that certain types of transit-oriented developments – such as apartments, bars and restaurants – include minimum amounts of parking if they’re within 200 feet of a single-family neighborhood. Some council members questioned whether 200 feet is enough, and suggested the required parking minimums should be extended to transit-oriented developments farther from single-family neighborhoods.

“People are parking a lot farther than half a block away” from transit-oriented businesses, often in neighborhoods, said Eiselt.

“We’re really trying to find a middle ground on how much minimum parking we require, making sure we don't overpark but making sure there is still adequacy in parts of our comm that are still auto-oriented,” said Laura Harmon, who’s leading the city’s UDO project.

City Council will release a second draft of the UDO in June, with a final draft released and adopted in August.