Charlotte’s $13.5 billion transit and transportation plans might be on hold, but plans for how to build the signature Silver Line light rail are still pushing ahead.

Officials from the Charlotte Area Transit System reviewed a new study about how to facilitate transit-oriented development around each of the Silver Line’s 31 planned stops. The 29-mile light rail line, which would run from Union County along Independence Boulevard, around uptown, west past Charlotte’s airport and over the Catawba River to Belmont, would be Charlotte’s biggest transit project to date.

“It's a much different project than we've done before, so the approach is also different,” said Silver Line planning director John Howard, speaking at the City Council’s Transportation, Planning and Environment committee on Monday. The Silver Line's estimated cost would top $8 billion.

“We understand where we missed the mark in other projects,” said Lewis. “On the Blue Line and the Blue Line extension, we looked at it really through our own lens of 'This is a rail project...We'll purchase the stations and let the market determine the rest.'”

In order to boost affordable housing, CATS is exploring strategies like land banking (buying land along the Silver Line before it shoots up in value to use for affordable housing later), helping neighborhoods organize and finding new ways to subsidize low-priced housing.

Lewis said that because of fiscal constraints, the transit agency will have to use creative approaches, such as identifying publicly owned land within walking distance of planned stations that could be used for housing and other services.

"There is a limit to what CATS can do as a transit agency," said Lewis. "We're not in the land-banking business."

The transit-oriented development study breaks down the areas surrounding each of the planned stations and estimates what kinds of development they could support. The study offers a window into how different parts of the Silver Line are likely to develop along different lines, if the light rail line is built.

For example, stations in less-developed areas away from major employment centers are likely to be “commuter” stations oriented towards people driving up and hopping on the train to get to work. That’s what’s envisioned for stations like Sharon Amity in east Charlotte and I-485 and Wilkinson Boulevard in west Charlotte. Many of those station areas are already rated poorly for walkability.

Stations built in denser areas, like those in and around uptown, are more likely to become “walk-up” stations, adjacent to major new developments and designed for people to access largely on foot. Stations at major regional sites, like Charlotte Douglas International Airport and Bojangles Coliseum, will be designated destination or multimodal stations, built to serve people accessing those locations and connecting to other modes of transportation, such as an airport shuttle.

"Every station area will not look alike, nor should it," said Howard. "It doesn't have to look like South End or NoDa. It's not a one-size-fits-all solution. That was a big concern of the towns to our east and west." 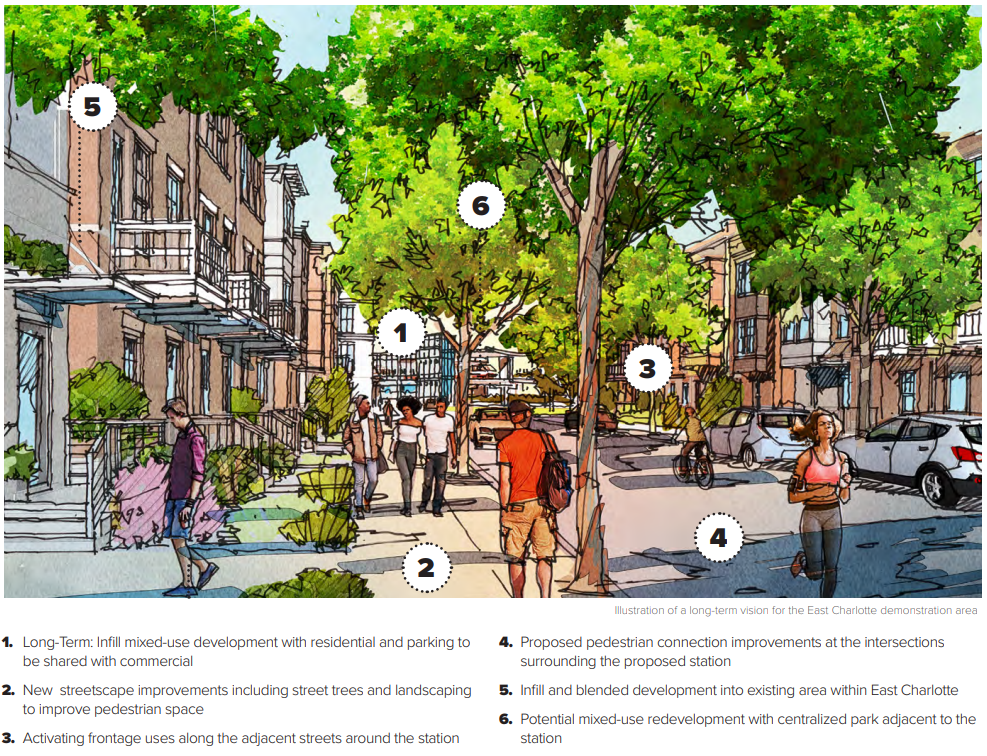 A rendering of what east Charlotte could look like near the Village Lake and McAlpine Silver Line stations. City of Charlotte.

In addition to the general descriptions, planners also took a more detailed look at seven specific station areas to project the amount of development they could expect in the coming years. In all instances, planners are expecting a tsunami of growth to wash over these sites similar to the waves reshaping much of the land along the Blue Line.

The estimates at this point are purely hypothetical, and renderings CATS presented to show how redevelopment could occur are illustrative only. Nevertheless, the scenarios illustrate how planners are starting to make concrete plans for a future that’s been largely abstract up to this point, bringing a new reality closer to being by degrees.

While plans for the Silver Line are moving forward, the project itself is in a holding pattern. A 1-cent sales tax in Mecklenburg County would be required to fund the transit expansion, and that would take the legislature’s approval and a voter referendum.

There’s little expectation that a measure will make it onto the ballot this year, and it’s unclear that such a proposal would be able to garner enough legislative support.

If the Silver Line moves forward, it would be built in two phases, with the eastern portion completed first, in 2036. The whole line could be operational in 2039, planners have said.