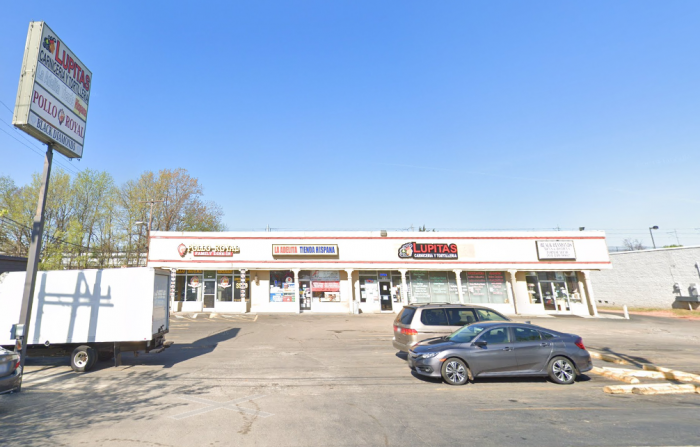 Driving down South Boulevard or Central Avenue, it’s easy to see the influence of Hispanic and Latino communities in the shops, taquerias and lavanderias that line both roads. It is perhaps an updated version of the historical image of immigration to the United States, not one of tightly packed tenements and ethnic enclaves in the shadows of the skyscrapers of Northeastern or Midwestern cities. Since the 1980s, immigrants have followed varied paths to different places in the United States.

It’s been nearly a generation since the 2000 Brookings Institution Report that classified Charlotte and Raleigh-Durham as “Emerging Immigrant Gateways,” based largely on the rapid growth of Hispanic/Latino immigrant population. Hispanics make up more than 10% of the population of the 14-county Charlotte region, according to recently released U.S. Census Bureau population estimates.

And while that concentration is stronger in the core urban county of Mecklenburg, where nearly 14% of the population is Hispanic, nearly half of the region’s 302,730 Hispanic residents live in surrounding counties. In fact, Charlotte region Hispanics are more likely to live in a surrounding suburban county than other minority groups, including Asians, 59% of whom live in Mecklenburg or African Americans, 54% of whom live in Mecklenburg. By contrast, only about 27% of the region’s non-Hispanic white population lives in Mecklenburg County.

The relative suburbanization of the Hispanic population has roots in recent history. Like so many Southern states, North Carolina attracted few immigrant groups through most of the twentieth century. That began to change in the 1980s, when eastern North Carolina farmers began recruiting migrant workers from Mexico and Central America to fill the gaps as the young native-born labor force fled rural communities.

Reliance on Mexican migrant workers intensified in the 1990s, particularly after the North American Free Trade Agreement (NAFTA) lowered import costs for US grain into Mexico, making it harder for Mexican farms to compete. Mexico’s agricultural workforce sought new opportunities and many found their way to the sweet potato farms or chicken processing plants of Sampson or Duplin counties down east, where today Hispanics surpass 20% of the population.

At the same time, Charlotte’s corporate growth spurt hit its stride. The city and its Chamber of Commerce courted companies from the Northeast and Rust Belt, touting a vibrant city with more space and lower taxes. Skyscraper and office park construction followed each announcement of a headquarters relocation, not to mention the suburban homes each newly arrived office worker from New York or Cleveland would want to buy. Demand for construction workers skyrocketed in the 1990s, and many agricultural workers began to move west to join those crews, which often included other Hispanic workers sent by Texas-based subcontractors.

As early as 1991, the Charlotte Observer noted a growing population of Hispanic workers living in and around Monroe. The suburban location was a practical one, commuting distance from both the urban construction sites of Charlotte and the agricultural job market including a major chicken processing plant in Marshville and peach and poultry farms to the east. These early migrants, mostly single men, eventually brought family with them.

Similar communities began to grow in Cabarrus and Rowan, Catawba and Iredell, Gaston and Lincoln counties. Soon, immigrants from other countries beyond Mexico and Central America found their way to North Carolina as well, often starting in larger metros before landing in Charlotte or the surrounding suburbs. 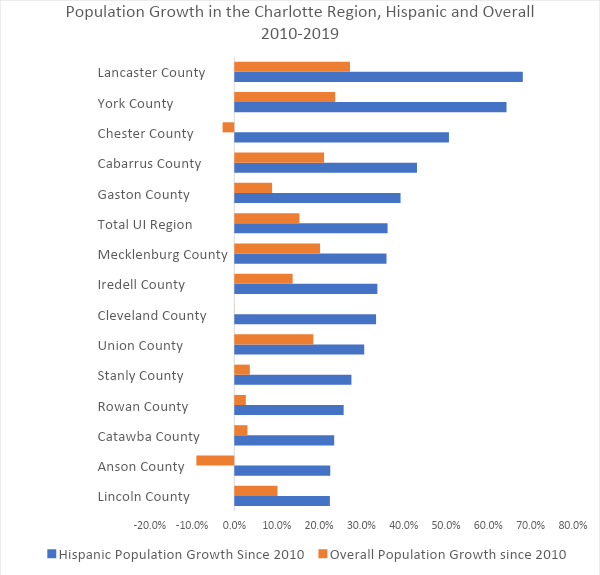 Jose D. Alvarez moved from Florida to North Carolina in 2017 to expand ProsperaUSA, an economic development organization which helps Hispanic entrepreneurs access capital and expand their business through Spanish-language services. An increasing share of clients, Alvarez says, are Venezuelan or Colombian immigrants looking to set up shop in North Carolina after starting in Florida or New York.

Their reasons sound familiar for anyone who follows economic development in the Charlotte region.

“North Carolina has very specific business characteristics,” says Alvarez. “It is cheaper to live here and cheaper to do business. We started looking at emerging markets and North Carolina was always number one or two.”

In fact, it’s not entirely accurate to call the region’s Hispanic population an immigrant community anymore. During this same period, the Hispanic population reached a statistical milestone — a majority of Hispanics living in the Charlotte region today were born in the United States. As of 2018, according to the American Community Survey, only 45% of Hispanics in the region were foreign-born, compared to nearly 55% in 2010.

Time will tell how and where this new generation of US- and Charlotte region-born Hispanic residents will choose to live and work.

“Their children don’t typically come to us,” says Alvarez of his immigrant entrepreneur clients. “They are a little more educated; they have a little more disposable income. They tend to either go to Wake or Mecklenburg or even leave the state.”

Paul Cuadros, A Home on the Field: How One Championship Soccer Team Inspires Hope for the Revival of Small Town America. Harper-Collins, 2007.

Chuck McShane, Ph.D. is senior vice president, economic research, at the Charlotte Regional Business Alliance, where he is responsible for strategic economic development, workforce and policy research and analysis. He is also a freelance writer whose work regularly appears in Charlotte Magazine and Our State. He started his career as a staff reporter and copy editor at several newspapers including The Charlotte Observer and The Herald of Rock Hill, S.C.