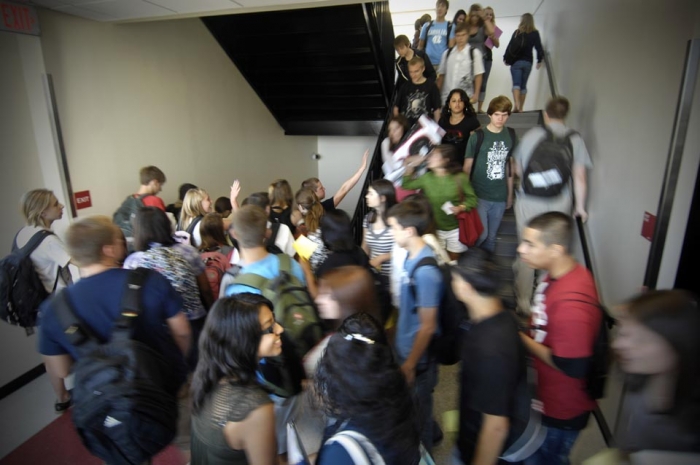 Are more Mecklenburg County parents these days opting for private school over public, or for charters or home schools? With the 2015-16 school year underway, UNC Charlotte Urban Institute researchers looked at how enrollment choices have changed for Mecklenburg families in the past 20 years.

The animated graphic below shows how Mecklenburg County public, private, charter and home schools have fared in attracting students, beginning in 1995-96. It illustrates the increasing role of charter schools and home schools, while the proportion of children in private schools has remained somewhat constant. The numbers were available from the N.C. Department of Public Instruction and the Division of Non-Public Education, N.C. Department of Administration.

In 1995-1996, approximately 1 percent of students were homeschooled, 87 percent attended Charlotte-Mecklenburg Schools, and the remaining 12 percent were enrolled in private schools.

The percentage of students attending private school has hovered around 12 percent, topping out at 13.7 percent in the 1999-2000 and 2000-01 school years, a time when Charlotte-Mecklenburg Schools were undergoing a controversial court case that led to a large student reassignment plan. But in the past six years, private school enrollment has dropped to 10.5 percent. In contrast, charter school enrollment and homeschooling have increased annually.

This means the proportion of students enrolled in CMS has declined nearly every school year. In 1995-1996, 87 percent of school-aged children attended CMS. In 2014-2015 this proportion dropped to 79.4 percent.

The state’s other large urban school district, Wake County (serving Raleigh and Cary), has seen a similar trend over the same years, with Wake County Public Schools serving around 80 percent of the children who attend school in the county for 2014-2015. Overall, compared to Mecklenburg, Wake has a slightly lower private school enrollment (8.9 percent) and charter school (4.9 percent) enrollment and slightly higher home school (5.7 percent) enrollment.