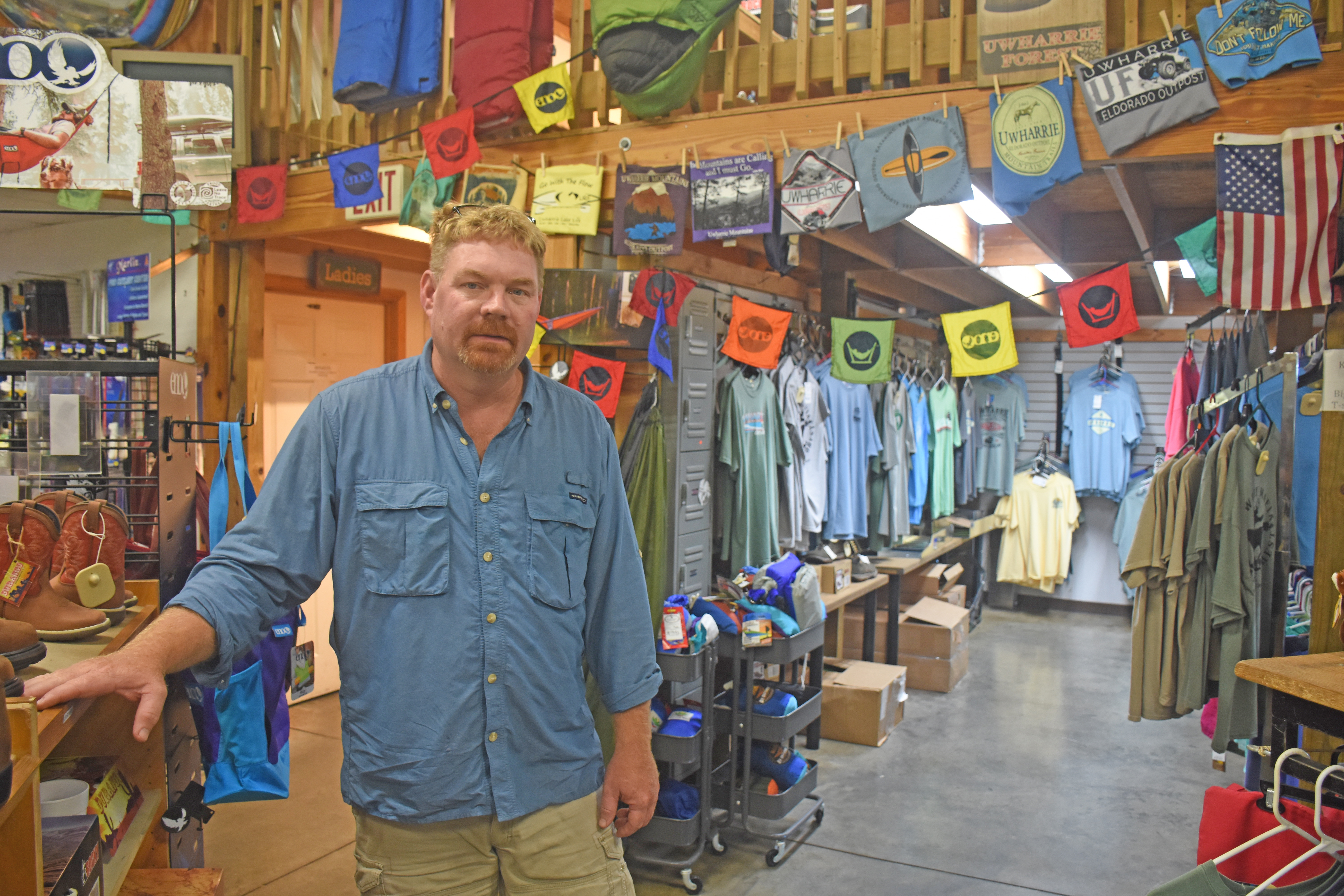 Hard-earned paychecks in the Uwharries are all too often spent at chain stores with headquarters in far-flung locations, or at restaurants and shops in large cities, sending cash from rural to urban areas instead of keeping it in the local economy.

The Eldorado Outpost has helped reverse that flow.

The Outpost was the brainchild of Rufus Owen, who moved his family in the 1960s to become the first ranger of the Uwharrie National Forest.  Ten years into retirement, he was looking for a project.  Two local general stores had recently closed, so the time seemed right to fill that need.  Owen was sensitive to local customers’ needs.  He set the building back from the road to make it easier for logging trucks to come and go.

According to his grandson, Chris Cagle, who now owns and operates the Outpost, he also saw an opportunity “to help people find the special places in the Uwharries.”

Cagle grew up in Trinity, but spent weekends and summers rambling around the Uwharries with his grandfather.  In the Outpost’s early days, Cagle and his wife lived in Brevard, where he worked in information technology.  When the business reached a natural transition, with some of the original owners ready for a different role or new career, Cagle decided to come home and run it.

The Outpost is many things – a general store, gas station, outfitter, café and gathering place – attracting locals and visitors alike.  Cagle loves to see people who don’t know each other sit down at the same table and strike up a conversation.

“You might see two guys who look the same – both of them are dirty and sweaty – but one of them has been out doing forestry work and the other has been working on his half-million dollar mansion at the lake.”

The Outpost caters to hunters, anglers, hikers, mountain bikers, campers, ATV enthusiasts and other user groups who come from the nearby cities and beyond to take advantage of the Uwharrie National Forest, the Yadkin-Pee Dee’s lakes and tributaries and large tracts of private land.

“I love to be surprised,” Cagle said.  A few years ago, he got a call from a group that came together online around their shared interest in making hammocks.  They wanted help arranging “The Uwharrie Hangout,” a weekend meetup for 80 people.  Chris found someone to deliver firewood and help them set up at Yates Place, a campsite on the Uwharrie National Recreation Trail.

As the Outpost became an informal visitor center, Cagle cultivated a stable of service providers in addition to his 22 full- and part-time employees.  He knows who to call when guys from Pinehurst are willing to pay a guide up to $600 for a day of bass fishing.  Or if a youth group is looking to rent kayaks or canoes.  Or if a wedding party needs a catered BBQ dinner.

One of his sources is a retired forest ranger.  Another is retired military.  One provides janitorial services at the campground.  Others do some logging or a little taxidermy.  It’s a way for local people to cobble together or supplement an income.  The Uwharries have a long history with this version of the gig economy.  In the past, when agriculture was stronger, farmers often picked up shifts at a saw mill or did some carpentry or logging.

Cagle takes pride in assessing a customer’s interests then directing them to the appropriate activity.  If a family with young kids wants to hike, he’ll suggest the flat three-mile loop along the lake.  If a backpacker wants a multi-day adventure, he’ll send them to the Birkhead Wilderness Area with the Uwharrie Lakes Region Trail Guide by former resident Don Childrey.

“I want people to feel like they got an inside connection when they come to the Uwharries,” he said.  “I want them to interact with locals and have a personalized experience.”