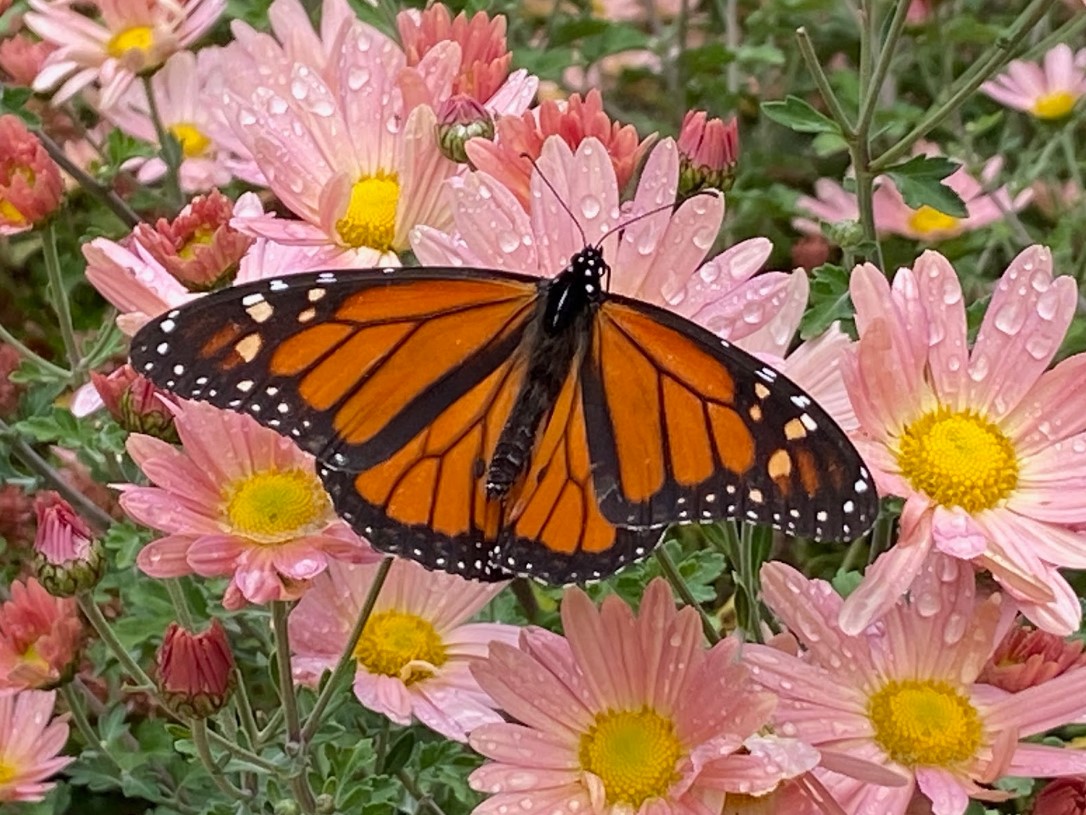 My front yard in Charlotte was a blank slate.  I had lofty aims – a garden of native grasses and perennials that were appealing to the human eye as well as birds and pollinators.  A dear friend offered me several pass-along plants, including a clump of apricot chrysanthemums.  Even though this fall-blooming perennial has long been used by Southern gardeners, it’s actually native to Asia, so it didn’t fit my basic criteria.  And I worried the color would clash with the cooler tones of the goldenrods and asters I was eager to plant.

I was also concerned they might take up a little too much real estate.  Old-fashioned “garden mums” are notoriously large and floppy, especially if you don’t cut them back by half in early summer.  They’re the wild child cousins of the prim and proper “cushion mums” which are available in a range of autumnal colors and generally treated as annuals, tossed in the yard waste bin after Thanksgiving along with moldy pumpkins.

But when my friend told me those chrysanthemums had come from an old farmstead along one of the most scenic back roads in the Uwharries, I couldn’t resist.  Plus, their carefree elegance fit with my overall aesthetic.

Rabbits eventually killed my coveted asters, but they took a pass on the chrysanthemums, perhaps deterred by their distinctive odor.  Many people don’t care for the scent – or its association with funerals – but to my nose it’s a wonderfully memorable mix of earthy and herbal.  By default, the apricot chrysanthemums became the stars of my autumn garden.  They come on strong by mid-October and bloom for a solid month.  And their color somehow harmonizes with other nearby plants – the burgundy leaves of a dogwood seedling and the frothy pink blooms of muhly grass.

To my surprise, they also attract an astonishing number of pollinators.  Week after week, they’re covered with an array of species.  This year, I tried to document as many as possible.  I recorded at least five butterflies, nine bees and nine flies, as well as an assortment of ants, bugs, beetles and wasps.  Some of these – including the narrow-headed marsh fly and the brown-winged sweat bee – I had never seen on any other plant in my garden.  How could that be? 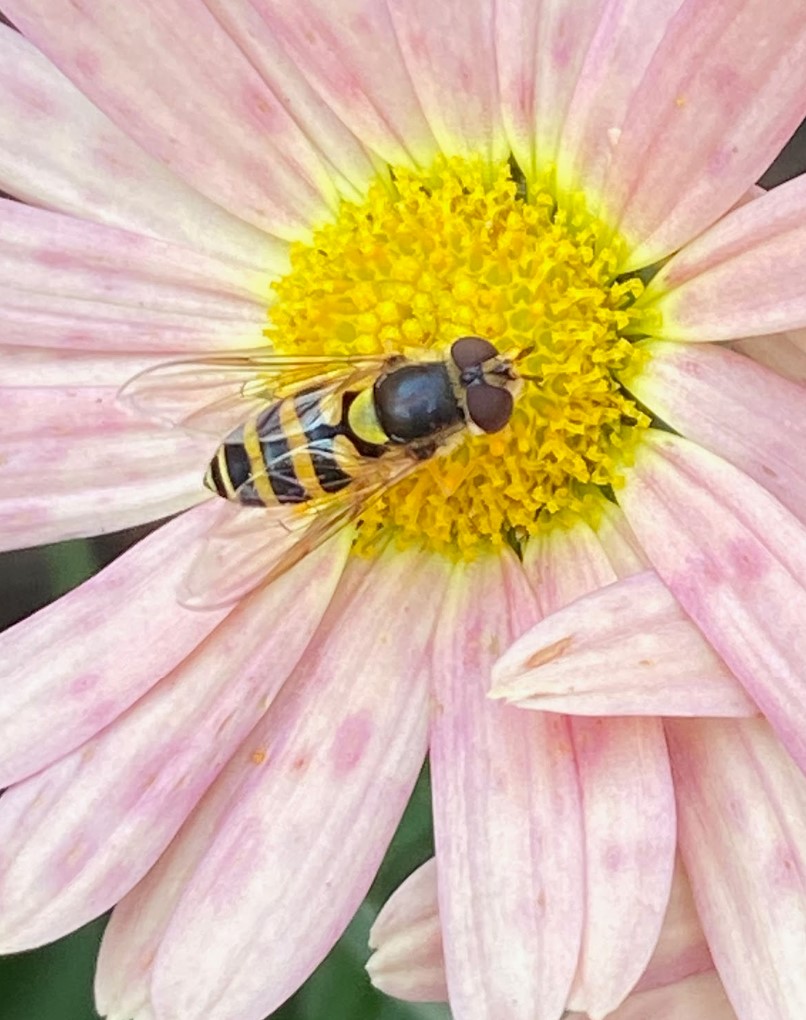 I quickly realized chrysanthemums are in the Asteraceae family, which includes other insect magnets such as sunflowers and goldenrods.  And unlike fussy hybrids, these old-fashioned garden mums have an honest, open face like a daisy, making it easy for insects to access the nectar and pollen.

I began to question my original assumption that a garden must be strictly native to benefit pollinators.  Entomologist Doug Tallamy often cites a study that quantified the amount of native vegetation needed to create viable habitat for insects and songbirds.  For Carolina chickadees to successfully rear a clutch of eggs, suburban yards need to be at least 70% native species.

Debbie Roos, an agricultural extension agent in Chatham County and the mastermind behind the phenomenal Pollinator Paradise Garden in Pittsboro (Chatham Mills “Pollinator Paradise” Garden | NC State Extension (ncsu.edu)), estimates that 85% of the 225 species in the garden are native not only to the Southeast, but to North Carolina specifically.  But she also uses a non-native sedum and herbs such as rosemary, catmint, lavender, bronze fennel and society garlic because they serve a diversity of pollinators.  Roos thinks it’s okay to incorporate a few exotics, as long as they aren’t invasive.

Indeed, I’m convinced my chrysanthemums attract masses of pollinators only because they’re surrounded by native grasses and perennials in a bed mulched with leaf litter.  A similar clump of mums in a yard dominated by exotics – the typical expanse of fescue bordered by boxwoods, azaleas and camellias – won’t be visited by nearly as many pollinators.

Lisa Tompkins, owner of Carolina Heritage Nursery, says interest in native plants has never been stronger.  As natives gain a foothold in our gardens, perhaps they will one day become beloved pass-along plants for future generations.  They meet some important criteria – they perform well in a range of conditions with minimal maintenance, and they speak of a certain time and place and sensibility.  In the meantime, if your garden is at least 70% native, it’s probably okay to indulge in a little sentimentality and include a clump of heirloom chrysanthemums. 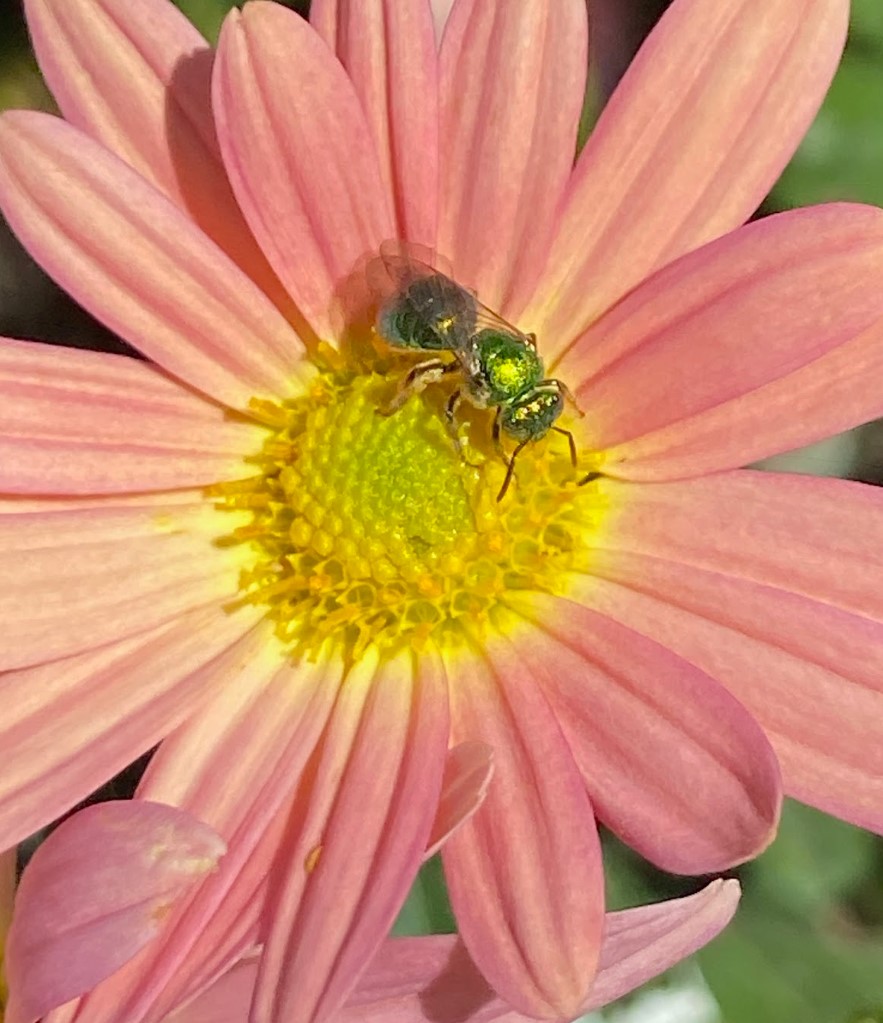