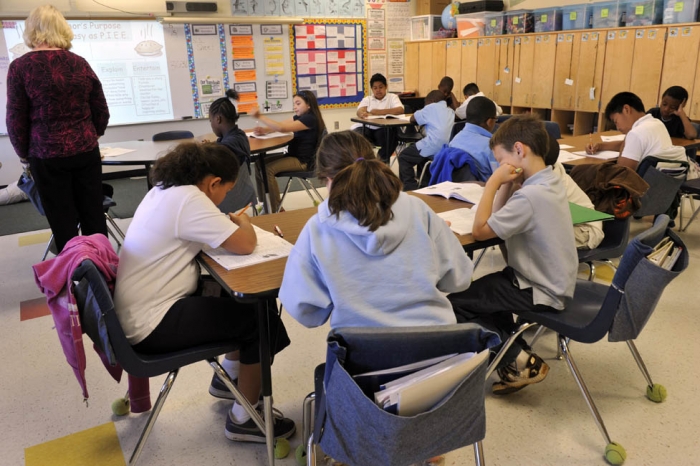 Data on schools and school districts are abundant.  Both the Charlotte-Mecklenburg Schools (CMS) and North Carolina Department of Public Instruction’s websites hold a wealth of data at both levels.  But with a district as large as CMS, it is painstaking work to analyze school-level data in a meaningful way.

In June 2011, the UNC Charlotte Urban Institute developed a set of interactive maps in partnership with MeckEd to make this rich data more approachable.  These maps have now been updated with the most recent figures available, the 2010-11 school year, and are ready to be explored through MeckEd’s Indicator Partner page or by clicking the map graphic below.

One of the most widely recognized indicators of the public education system is the four-year cohort graduation rate.  The profile of this indicator has been raised even further in the Charlotte community of late, as a number of initiatives have tied their success to this single statistic.  CMS’ Strategic Plan 2014 set an ambitious goal for the district’s graduation rate to reach 90 percent by 2014.  The newly launched United Way Collective Impact for Children Initiative has the overarching goal to increase the cohort graduation rate for at-risk, low-performing children served by 15 participating United Way agencies by the 2020-21 school year.  Project L.I.F.T., a philanthropic initiative that aims to accelerate improvement in academic outcomes for children in the West Charlotte corridor, set one of its goals as bringing the graduation rate of West Charlotte High School to 90 percent by 2017.

It is clear from the map showing individual schools' graduation rates that there is significant ground to cover in order to meet these goals.  In the 2010-11 school year, only seven of the 34 high schools with available data surpassed the 90 percent graduation rate.   The district as a whole saw only 73.5 percent of students graduating in four years.

Even so, over half (20) of the district’s high schools showed improvement in their four-year cohort graduation rate from the previous year.  North Mecklenburg High saw the greatest increase, from 82 percent in 2009-10 to 89 percent in 2010-11.  Cato Middle College maintained its top rank, with a graduation rate of over 95 percent.  West Charlotte, the target of the multi-million dollar Project L.I.F.T., rose from the very bottom to second lowest, at 54.3 percent.  However, the school with the lowest rate in 2010-11, E.E. Waddell, is now closed.

Much of the data in this set of maps update numbers from the set of maps published last year.  Still, there are a couple of new things to note in the 2010-11 maps.

First, the data source for the student proficiency measure has changed.  In the 2009-10 maps, student proficiency was measured using the End-of-Grade (EOG) math and reading composite for elementary and middle schools and End-of-Course (EOC) composite for high schools.  In the 2010-11 maps, student proficiency is now measured using the ABC Performance Composite, which is the percent of EOG/EOC test scores in each school that are at or above grade level.  For elementary and middle schools, this includes math, reading, and science EOG scores.  For high schools, this includes algebra I and II, biology, civics and economics, English I, history, physical science, and writing EOC scores.

These growth indicators look beneath the blanket of student proficiency and examine which schools are successfully moving students at all levels ahead a full year.  Even the best elementary schools in terms of student proficiency are having a tough time advancing their students a full year in reading.  Only three schools (Oaklawn Language Academy, Chantilly Montessori, and Providence Spring) broke the 70 percent level.  On the other hand, at Druid Hills, which ranks rather low in student proficiency (45.6 percent), nearly 85 percent of the students who began the year on grade level in reading achieved at least one year’s growth by the end of the year.

Additional overarching trends worth noting include per-pupil expenditures and student-teacher ratio.  Still, in the midst of tough economic times and budget cuts, nearly three-quarters of schools saw their per-pupil expenditures fall from the 2009-10 levels.  Similarly, nearly three-quarters of schools saw their student-teach ratios increase.  Teacher turnover and attendance rates, however, fluctuated in both directions, with no universal trend.

The maps are posted on websites for both the UNC Charlotte Urban Institute and MeckEd.