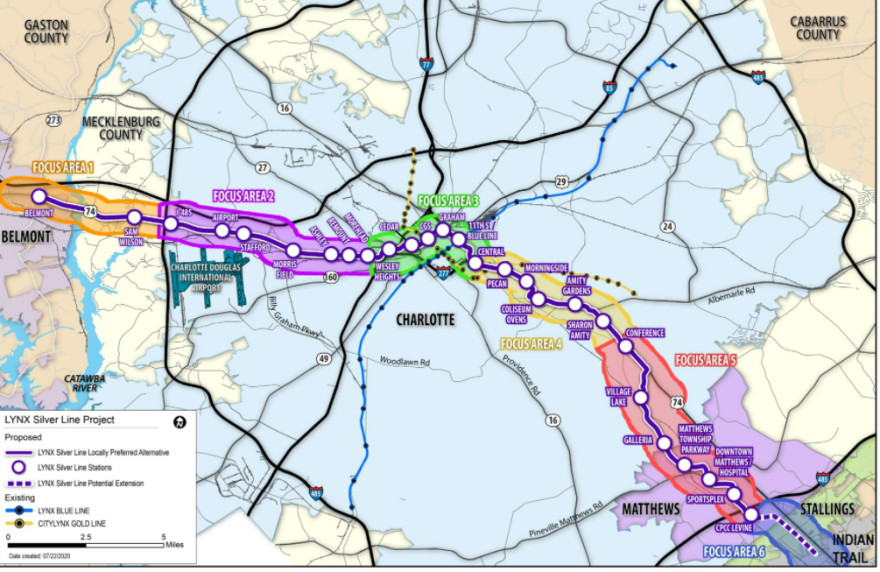 This story was originally published in Transit Time, a collaboration between the UNC Charlotte Urban Institute, WFAE and the Charlotte Ledger.

A new report from outside consultants says Charlotte transit leaders should consider changing the planned Silver Line light rail route through uptown, in order to attract enough passengers to have a better chance of winning federal funding.

The Urban Land Institute (ULI), a consultant that recently worked with the city and the Charlotte Area Transit System, said in a presentation last week than planners should examine an alternate route that runs closer to the middle of uptown. One potential solution: running Silver Line trains along a portion of the Blue Line tracks through uptown, a common practice in transit known as “interlining.”

The Silver Line’s proposed path through uptown has been controversial because it would skirt most parts of the center city. Instead, the route favored by CATS would run along Interstate 277 north of uptown. People going to Trade and Tryon streets would either walk a half-mile — or walk a block to a Blue Line station and then wait for another train to finish their journey.

Charlotte officials have said the northern route is the best because it’s less expensive than going through the heart of uptown. They also have said it would spur development in areas where there has been little construction.

Here is a map of the currently proposed route (in purple): 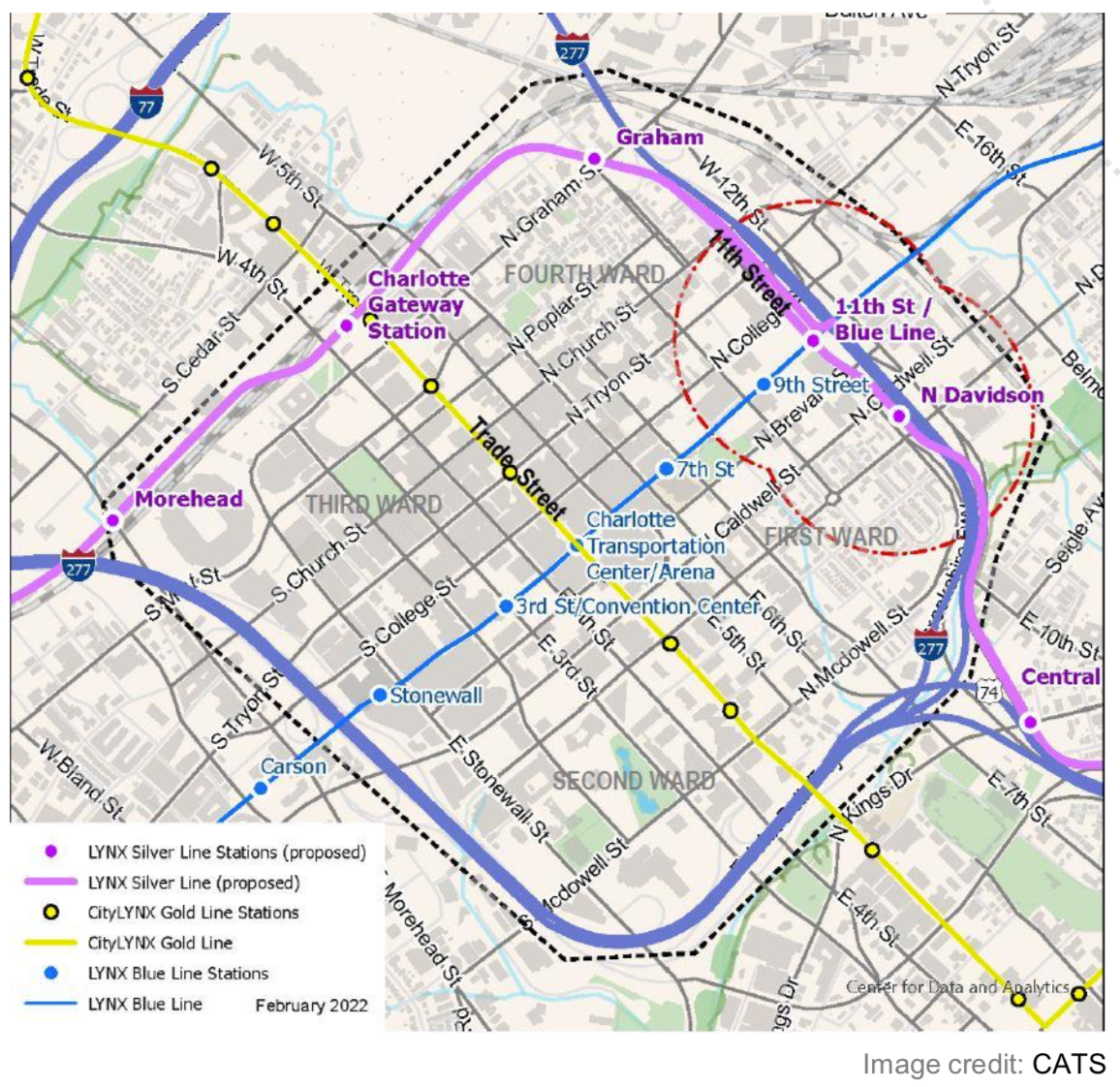 But transit advocates have questioned the alignment, saying it wouldn’t have a station close to where most people work.

And now the Urban Land Institute agrees, saying CATS should conduct a detailed study. A previous study, the consultant said, did not estimate costs, ridership or how federal officials would evaluate the project.

The “interline” option would bring the Silver Line into uptown along 12th Street. That’s the same path that’s being considered today.

In transit systems across the world, it’s common for different rail lines to share the same tracks.

Here is a map of that proposed alignment (in orange): 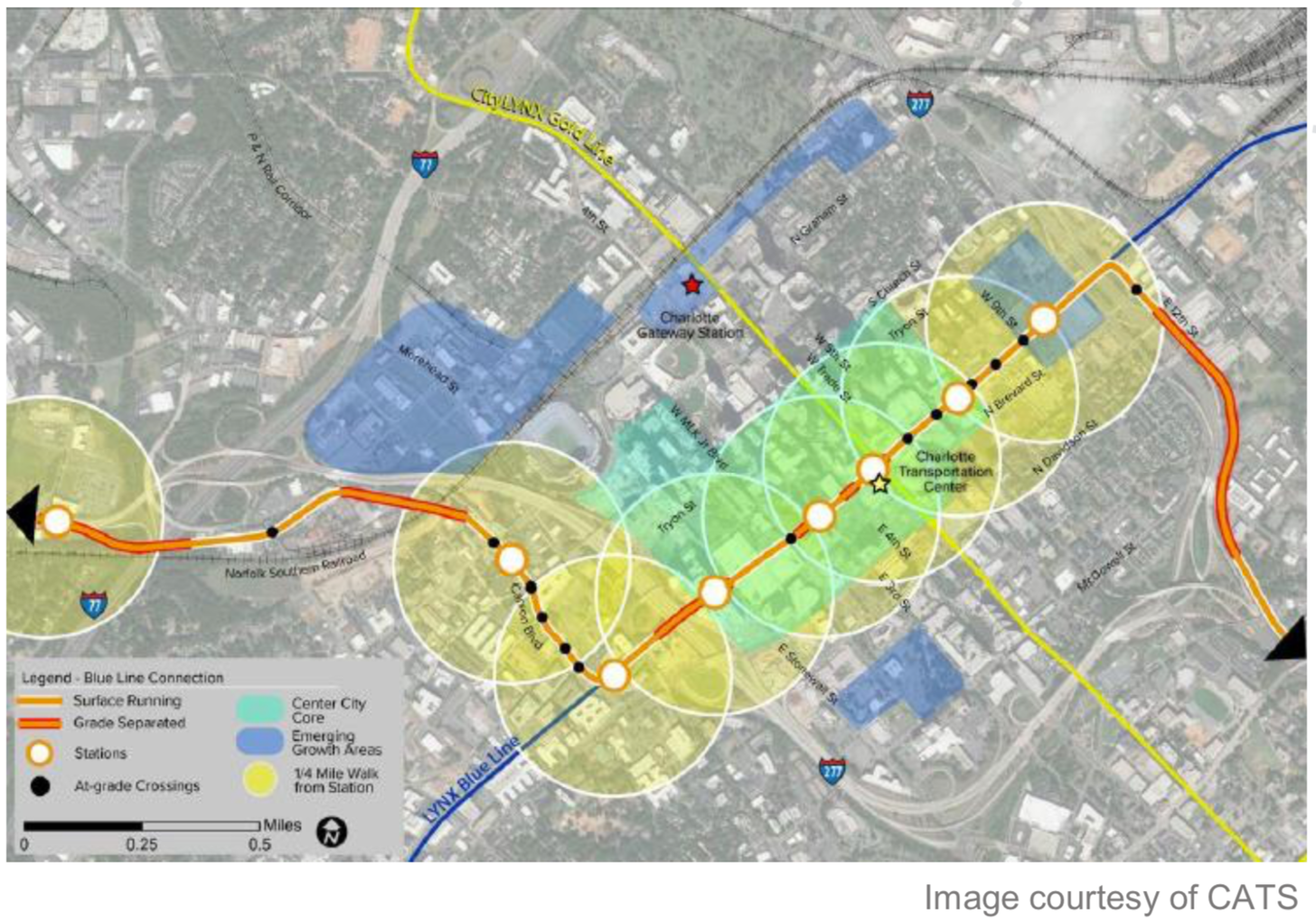 The ULI said “Interlining with the Blue Line would increase ridership, reduce cost and improve the FTA rating.”

The FTA rating is a reference to a score the Federal Transit Administration gives new rail projects to determine if they are worth funding with federal money. Having federal support for the Silver Line is crucial because the city anticipates the federal government would pay for almost 1/3 of the construction costs.

The ULI said having the Silver Line and the Blue Line share the same tracks would give passengers “direct access to five existing stations in the center of Uptown, the most intensive trip generation in the region.”

It also said the alignment would make it easy for passengers to switch from the Blue Line to the Silver Line, “which would also improve ridership.”

It also said it would be cheaper, though it didn’t provide an estimate of how much could be saved.

At the moment, the route of the future Silver Line is theoretical, because there is no funding to build it. City leaders have floated the idea of a $13.5 billion transit plan that envisions building the Silver Line and other transit and transportation projects, but it depends on winning legislative approval to hold a referendum to raise the sales tax. That plan appears stalled, at least for now.

She said the ULI’s “focus on ridership reflects what many in the public have been saying: that we need to align the Blue Line and Silver Line stops if people are going to use that transfer point to come in and out of uptown.”

It’s unclear, however, whether CATS and city leaders will consider the ULI recommendations. City officials like former planning director Taiwo Jaiyoeba — who is now city manager in Greensboro — had pushed for the northern route to spark economic development.

The report said there are some disadvantages to the interline route. One is that trains would cross the heart of uptown more frequently, lowering railroad crossing gates and disrupting traffic.

Another downside is that the interline route would also avoid the Gateway train station that’s under construction near Truist Field.

The Urban Land Institute also considered other ways for the Silver Line to run through uptown.

The ULI said it studied a tunnel under Trade Street, where the Gold Line streetcar operates.

What’s unclear is why the ULI didn’t study a tunnel in a different location , such as under 7th Street.

The Silver Line would run from Matthews to the airport.

The current alignment for the Silver Line would have a stop on Wilkinson Boulevard, which is a mile from the terminal.

(Transit Time wrote in detail about the push to move the light rail closer to the airport terminal in July 2021.)

The ULI also recommended having a “direct airport connection.” City officials have also said the Silver Line can’t serve the airport terminal directly. But it might be possible to get closer to the terminal — within about 1/3 of a mile — without major disruptions.

Other recommendations from ULI included:

“Build support coalition by pursuing the above with transparency, building trust and inspiring leadership”