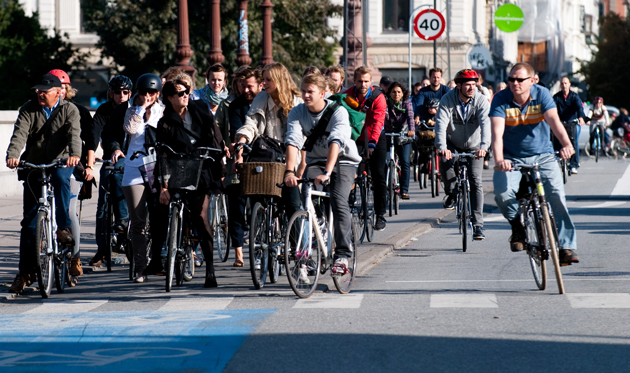 In August, 34 officials and community leaders from nine Knight communities traveled to Copenhagen, Denmark, and Malmo, Sweden, to study how to make their cities more livable. The trip was organized by 8-80 Cities and sponsored by Knight Foundation.

The Charlotte team members who traveled to Scandinavia had a range of experience on bicycles; they identified themselves as a mountain biker, a neighborhood rider, an up-for-anything gal and two haven’t-done-this-since-childhood worriers. We all left Copenhagen with a new appreciation for what a cycling city feels like.

We experienced cycling in rain and in sunshine, on a lazy Sunday afternoon and during a hectic morning rush hour, on separate bike lanes and in the middle of cars and pedestrians.

We left seeing cycling as just one piece of an engaging urban life, where, at least in Copenhagen, the first response is “yes” to requests for events, outdoor cafes, etc. It’s a policy, city leaders told us, to invite life.

We learned a new term for this cozy, comfortable life. In Danish, it’s called hygge (pronounced vaguely hue glee). Picnics in the park, outdoor concerts, street festivals and bike rides can all be very hygge. Sidewalk cafes provide lap blankets – even in August!

Could Charlotte compete with Copenhagen as the happiest and most livable city in the world? What would it take?

We heard Copenhagen planning staff talk about that city’s approach to creating a livable city. “Think about urban life before creating an urban plan,” said one.

Creating playgrounds that allow adults to play, too, encourages them to stay longer, for example. We saw a good example of that in a day trip to Malmo, Sweden, where the city has created 20 themed playgrounds.

At Fairytale World, we saw toddlers climbing over small mounds, called bubbles, and adults sliding down a rainbow. We talked about the social capital value of this idea: encouraging residents to move around the community to experience different parks, meeting new people and seeing new neighborhoods along the way.

The hard part comes in taking what we learned about urban life into our less dense, car-dependent city. How do we introduce the concept of connecting people to more ways to move – such as biking and walking – so commuting becomes a happy experience?

Our team talked a lot about that.

Perhaps, we should focus first on making it easier for bikers and walkers in close-in neighborhoods to access the center city. Perhaps, we should think about community-life nodes around the county and then better connecting those with greenways, bike lanes and transit options.

The reason, though, seems obvious: It’s good for business. Companies want to recruit young and creative talent, and millennials want the hygge that urban life provides.

Gil Penalosa, executive director of 8-80 Cities, our trip host, believes biking and walking are a human right. “A great city for walking is a great city,” he’s quick to say.

Though much of our conference focused on cycling, we began to think of it as a means to an end. Even in Copenhagen, few residents think of themselves as cyclists, we were told. They – 41 percent going to work or school – ride their bikes because it’s quicker, easier and convenient.

What could we do in Charlotte?

Here are some early ideas we plan to explore with the community:

The final idea that stuck with us was a statement by Riccardo Marini, a director of Gehl Architects: “ A city is a reflection of the culture of the people who created it.”

If we hold up a mirror to the city of Charlotte in 50 years, what will we see? And will it truly reflect the dreams and aspirations of its residents?

Susan Patterson is the Charlotte program director for Knight Foundation. Opinion pieces reflect the opinions of the author and not necessarily those of the UNC Charlotte Urban Institute or the University of North Carolina at Charlotte.