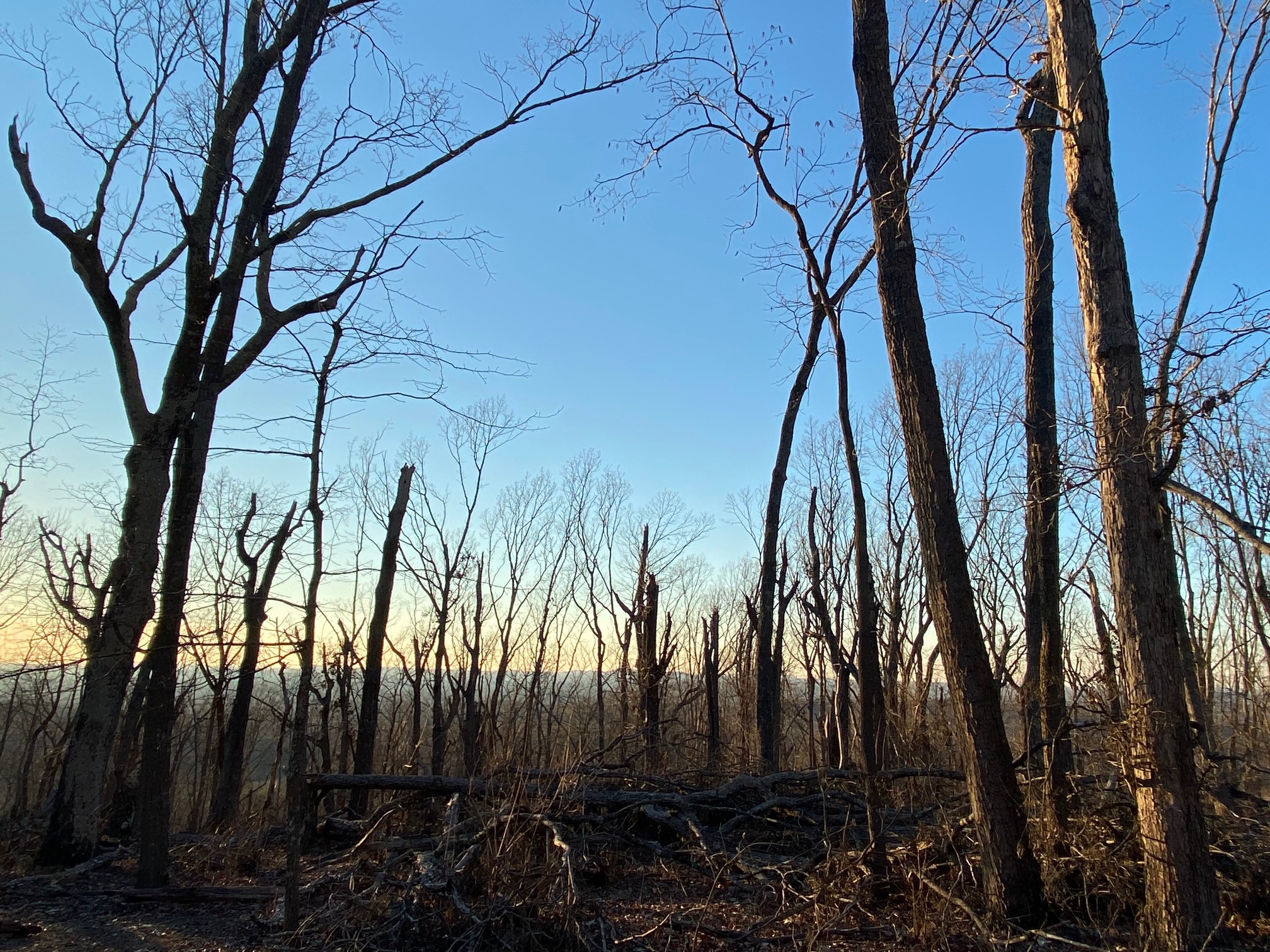 My husband and I recently hiked the Birkhead Trail, starting at Tot Hill Road for the first time since that section was hit by a wind storm in June 2019. Hundreds – perhaps thousands – of mature trees were snapped or uprooted along the trail. I hate to see a mature hardwood forest in the Uwharries suffer such extensive damage. It will take a century to replace those massive oaks. As I trudged along, I ruminated on the loss. Whether it would have implications for birds that depend on the forest interior like the declining woodthrush. Whether it could even be considered a “natural” disturbance in this time of climate change, when storms are becoming more intense and frequent.

Less than a mile in, we came to an area where the wind had funneled through a hollow, taking down vulnerable trees in boggy soil. Then, we climbed through a relatively untouched section up to Coolers Knob. There, it seemed the ridge had been hit by a straight-line wind from the southwest. Most of the uprooted trees had fallen in the same direction. Others had been reduced to tall, jagged trunks, bereft of crowns. Trunks and branches lay in tangles. It was a mess. I was overwhelmed by the scale of destruction. I was astounded the Uwharrie Trailblazers, the USFS and the SAWS Crew had found the patience and stamina to clear the trail, especially in the wilderness area where they were restricted to non-motorized equipment.

Then I heard it – a distant sound of hope – a woodpecker drumming on decapitated trunk downslope. Cavity nesters rejoice! That terrible storm had created a lot of new habitat in the Birkhead Wilderness Area. Scores of mammals, birds, reptiles, amphibians and insects nest in standing dead trees, also known as snags, and under the downed limbs and trunks, or use them as places to forage or perch. These include raccoons, foxes, flying squirrels and chipmunks; Owls, woodpeckers and beloved songbirds such as titmice, chickadees and bluebirds; lizards, toads and salamanders; pollinator bees. Think of how quiet our forests would be without these dead trees. 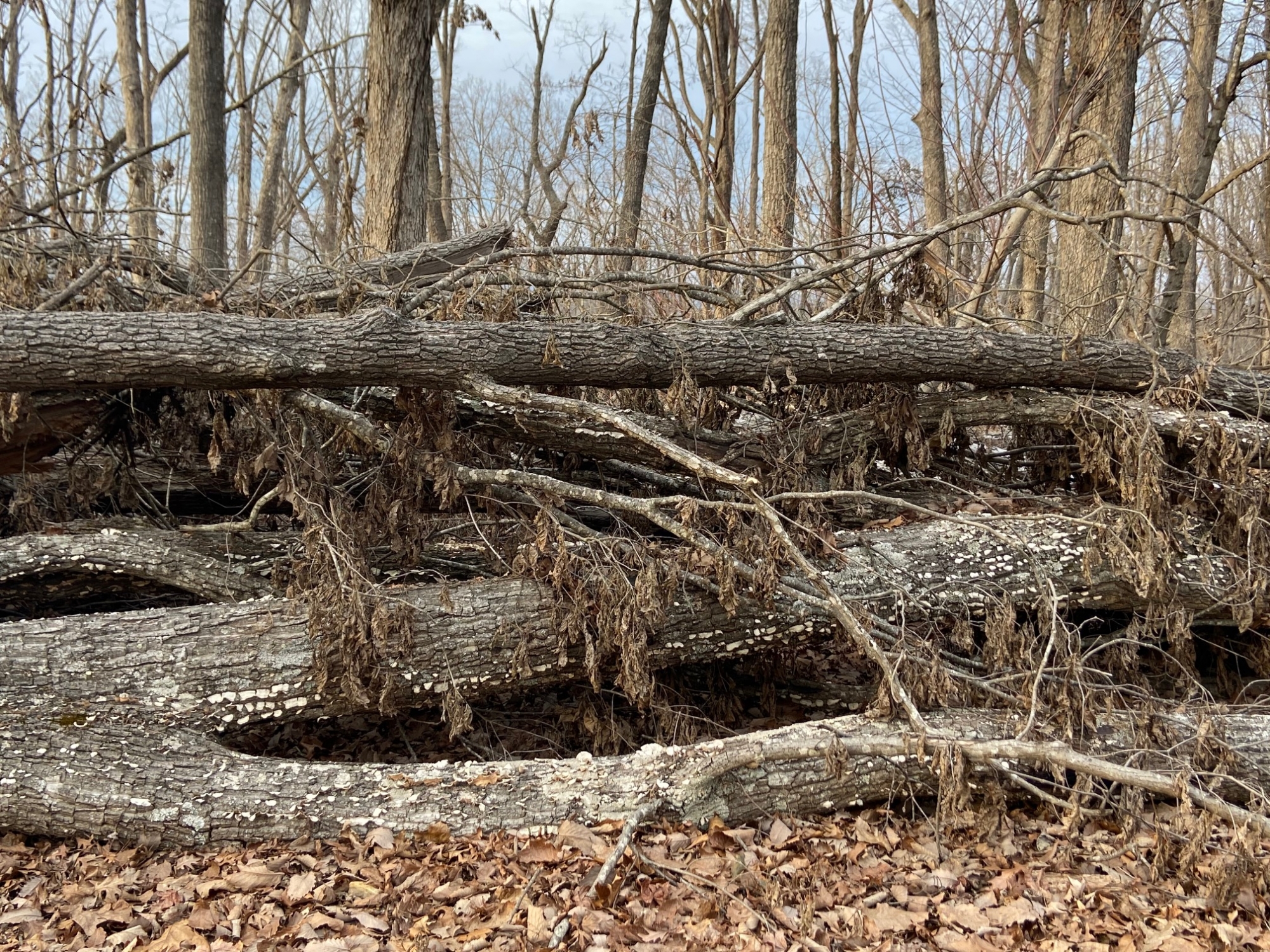 Fallen trees provide shelter and food for many other species, and leave room for new growth. Photo: Ruth Ann Grissom.

Colorful fungi, mosses and lichens were already hard at work breaking down the wood. Beetles and ants arrived in droves to hasten the process. The fungi also attract tiny flies. These insects – which E.O. Wilson calls “the little things the run the world” – serve as the base of a dynamic food chain. The decaying wood will become nature’s all-you-can-eat buffet, in essence feeding the entire forest.

Rootballs leave behind cavities where animals can shelter. I was delighted to find one where the soil conditions had created a vernal pool. When I paused to examine it, a tree frog yelped and plopped in the water. Another movement caught my eye – a bee was burrowing into dirt held vertical by the upturned roots.

The downed trunks and limbs stabilize and enrich the soil, providing the rich humus required by so many woodland plants. Canopy gaps allow for the proliferation of more sun-tolerant plants. Patches of broomsedge had already become established along the trail. This brings species diversity to the forest floor.

Unfortunately, in our post-wild world, there’s also a downside to this sort of disturbance. As I walked along, I noticed salt-shrub seedlings taking hold among the broomsedge and – to my amazement – a Southern magnolia seedling far from any yard. Both species are native to the coastal plain, but in recent decades they’ve become weedy interlopers in the Piedmont. I plucked as many as I could, but I hope the USFS and the Uwharrie Trailblazers will add invasives control to their routine trail maintenance. 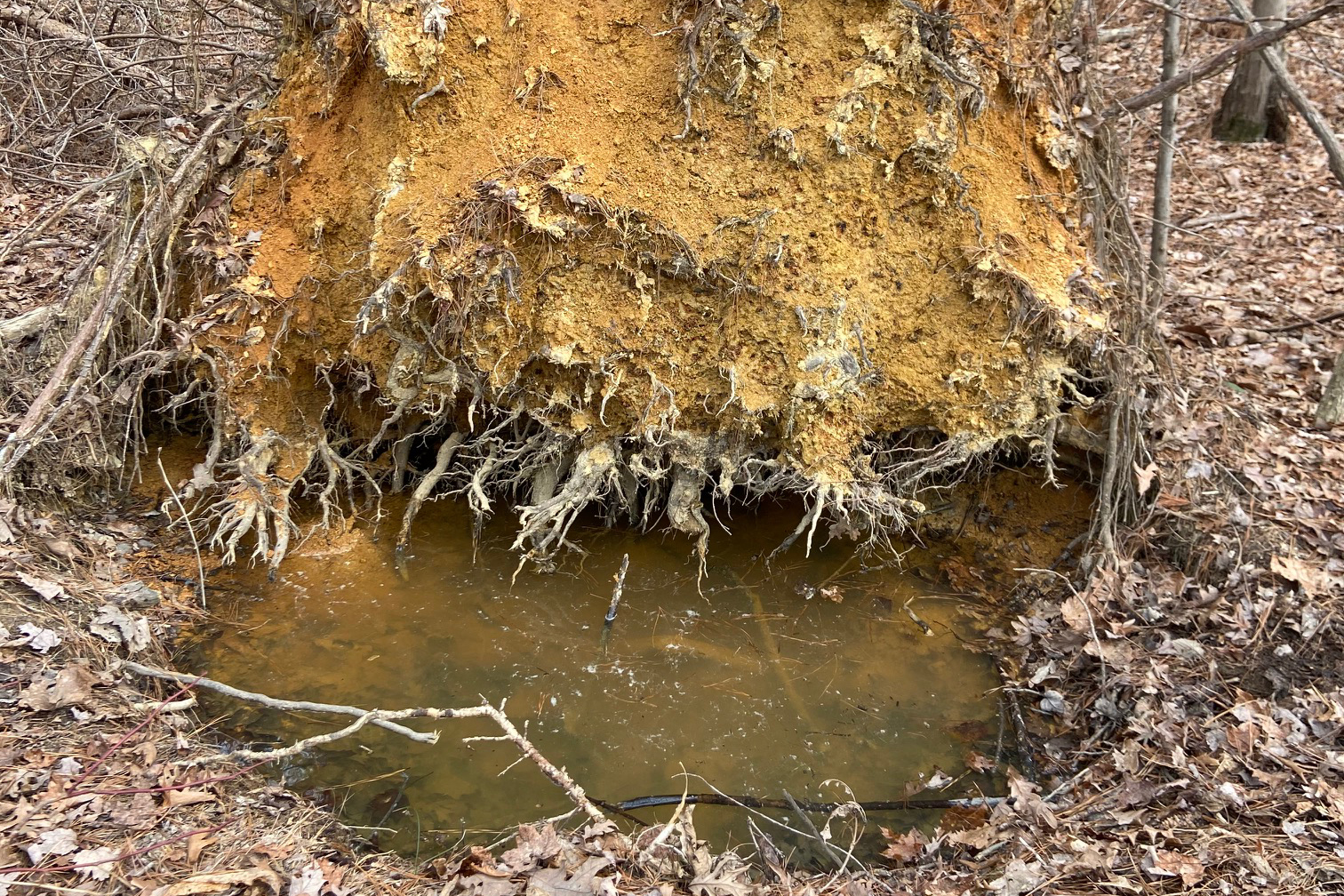 “Sometimes we focus so much effort on keeping trees alive we overlook the importance of standing dead trees,” said John Isenhour, wildlife conservation biologist with the N.C. Wildlife Resources Commission. In fact, it’s possible to mimic the benefits of snags and downed limbs in a small woodlot or even a suburban backyard. “Snags can be created using the girdling or hack and squirt technique,” said Isenhour. When it isn’t possible to keep a dead tree due to safety concerns, an arborist can remove the limbs but leave a tall section of the trunk standing. The limbs and branches can be used to create a brush pile in a corner of the yard.

I still mourn the loss of any intact hardwood forest, especially in a national forest as small and fragmented as the Uwharrie, in a region as fragmented by development as the Piedmont. But the impact can be mitigated when enough high quality habitat remains in other areas. Good stewardship on public and private lands of all sizes can help our forests remain resilient.