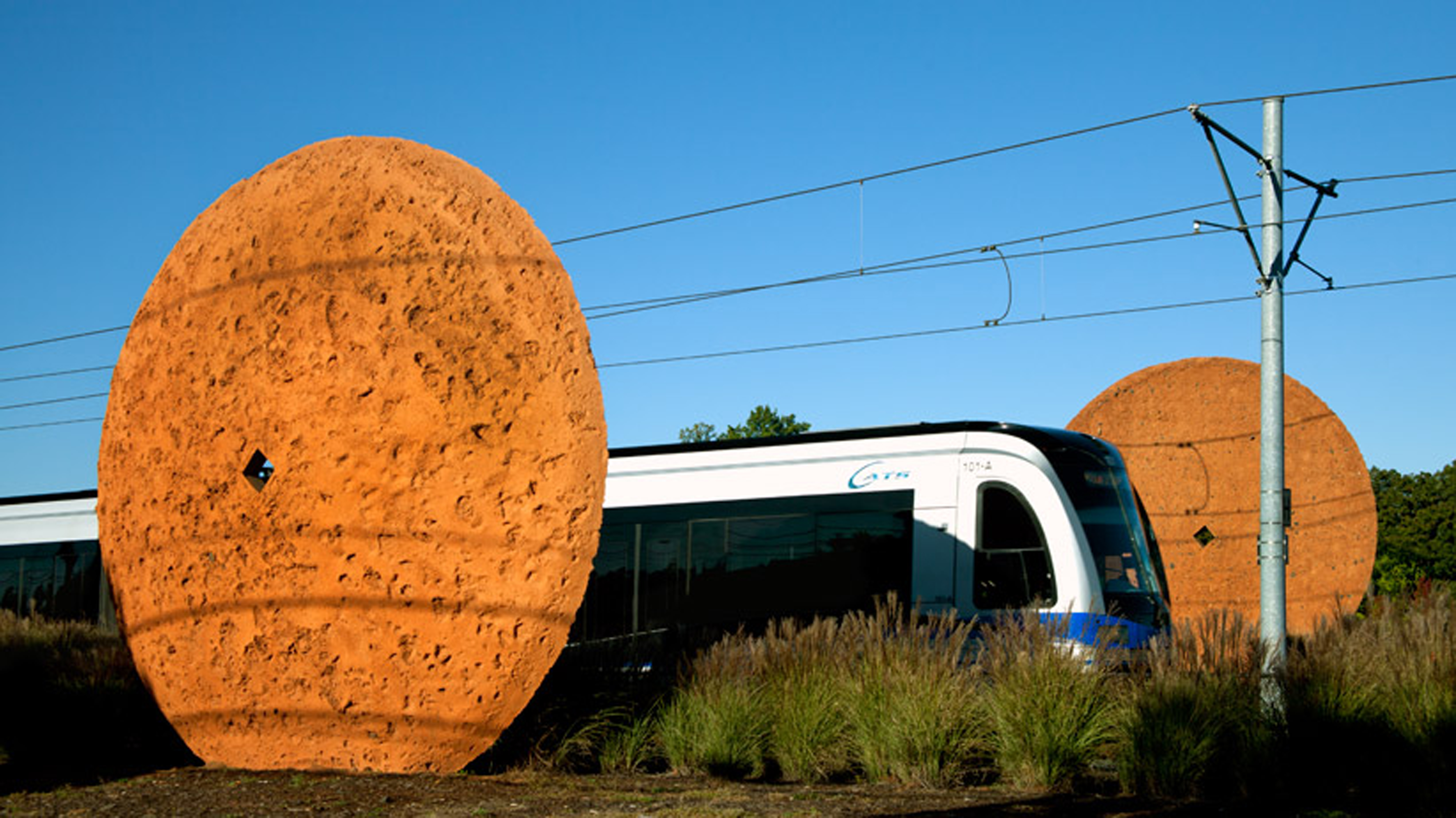 “I love the sight of red clay.”  Those words, from a professional colleague of my wife’s as he showed her the view from his high-rise office in uptown Charlotte, were jarring for her as a newly arrived preservationist.

She had recently moved to Charlotte from Washington, where she had worked for the National Trust for Historic Preservation, and was still trying to understand the culture and spirit of a city where even an ardent preservationist, though uneasy with the apparent disregard for most things historic and green, could nonetheless feel and appreciate the raw energy and force of a city on the make, transforming itself daily.  And she understood that her colleague, a board member for one of the city’s preservation groups, was not dismissing the city’s historic and cultural fabric.  Quite the opposite. His comment reflected, in a fundamental way, something essential about this city.

I recalled that story as I watched Earthcaster, a documentary about North Carolina sculptor Thomas Sayre, scheduled to air June 23 on UNC-TV.  Charlotteans may not know Sayre’s name, but they are probably familiar with his work. He’s the artist behind “Grandiflora”, the sculpture installed in 2000 at Randolph and Wendover roads (informally called “the onion rings” by some), as well as “Furrow,” 2006-07, the six large discs at the Scaleybark light rail station on South Boulevard.

Produced by Carrboro-based Minnow Media and its creative team of Donna Campbell and Georgann Eubanks, Earthcaster is a sympathetic look at Sayre and his art, which has grown in stature in recent years.  As the story of his life and artistic vision unfolds in the film, I was struck by how relevant Sayre’s work is to the story of Charlotte – its agrarian roots, adolescent ambitions, and complicated relationship with the arts and history.  Yet the documentary – while not ostensibly about Charlotte – also caused me to reflect on the city’s maturing cultural identity as well as the growing acceptance of public art and its importance in place-making and urban design.

Unfamiliar to many, “earthcasting” is a process of carving molds in the earth, reinforcing them with steel, and then pouring earth-colored concrete into the mold, where it stays for weeks before being lifted by crane.  The result is sculpture that takes on the characteristics of the place where it was formed.  Here in the Carolina Piedmont, that means Sayre’s sculpture captures the rich texture of the abundant red clay, along with organic matter such as roots and leaves caught in the process.

Sayre’s sculpture, when combined with the themes of nature and local culture that inspire his work, takes on a unique character specific to place.  In wine and food circles, they would call that terroir.

Understanding that technique is one step toward appreciating Sayre’s work in Charlotte.  “Grandiflora” takes its name from the Latin name for southern magnolia (Magnolia grandiflora), a native tree that, domesticated, has become symbolic for gracious Southern living.  The curving lines of the rings at Randolph and Wendover suggest the graceful petals and seed pods on the magnolia trees planted as backdrop to the sculpture and found abundantly in nearby lawns.

In a similar fashion, “Furrow,” at the Scaleybark station, also speaks of place, both past and present.  Reminiscent of the disc harrows that once worked the farmland where the station now stands, the scale of the sculpture speaks optimistically of a more urban, transit-oriented future while reminding us of a past when plows busted up the clods of red clay that today seem to sprout overnight into apartments and offices.

This theme of art celebrating places in transition surprised me as I watched the film, even though I’ve been familiar with Sayre’s sculpture for nearly 30 years.  Sayre is not an aloof artist working in a remote studio but actively engaged in the field, collaborating with an array of construction workers – including backhoe and crane operators – to massage and cajole the earth until it yields to a creative vision unique to a particular place and time.

[highlight]Sayre’s sculpture, intentionally or not, speaks to the spirit of a city where the scent of magnolias and freshly plowed soil are still part of the cultural memory.[/highlight]

It’s an intense process – often muddy, hot and stressful, but full of energy and creative tension – and that’s where the film’s imagery reminds you of the Charlotte that so many newcomers, like my wife, experience as their first impression of the city: the incessant change, the cranes, the energy, and yes, the ubiquity of red clay. Sayre’s sculpture, intentionally or not, speaks to the spirit of a city where the scent of magnolias and freshly plowed soil are still part of the cultural memory, even as growth and development transform it into something new.

In telling the story of Sayre’s childhood, the film reflects on another city undergoing dramatic change and how that transition may have influenced his art. Sayre was raised in Washington, the great-grandson of President Woodrow Wilson and son of a long-time dean of the National Cathedral. He spent much of his childhood surrounded by artisans from around the world as they completed the cathedral, a decades-long project of transforming stone, wood and glass into a national architectural treasure. The National Cathedral would become a symbol of Washington’s maturing identity as a center not only of political power but of culture and the arts.

Which brings us back to Charlotte – a place that just three decades ago rejected a Joel Shapiro sculpture for the then-new coliseum (now demolished) on Tyvola Road – a sculpture detractors dubbed “Gumby” after the 1950s-era clay character many said it resembled.  It was a watershed moment in the history of public art in Charlotte, one that for many confirmed Charlotte’s reputation at the time, at least culturally, as an adolescent in its ongoing quest for big-league status.

Today, Charlotte is a different place. On Tryon Street uptown, new museums have joined the city’s iconic bank towers, while sculpture that would have surely been ridiculed just years before – by renowned artists such as Niki de Saint Phalle and Jaume Plensa – is now warmly embraced and celebrated by a new generation of Charlotteans for both its artistic value and what it represents about the city’s maturing urban and cultural identity.

Earthcaster shines a light on one of the artists whose work paved the way for this new-found identity, in part because that work served as an artistic and cultural bridge between Charlotte’s past and present.