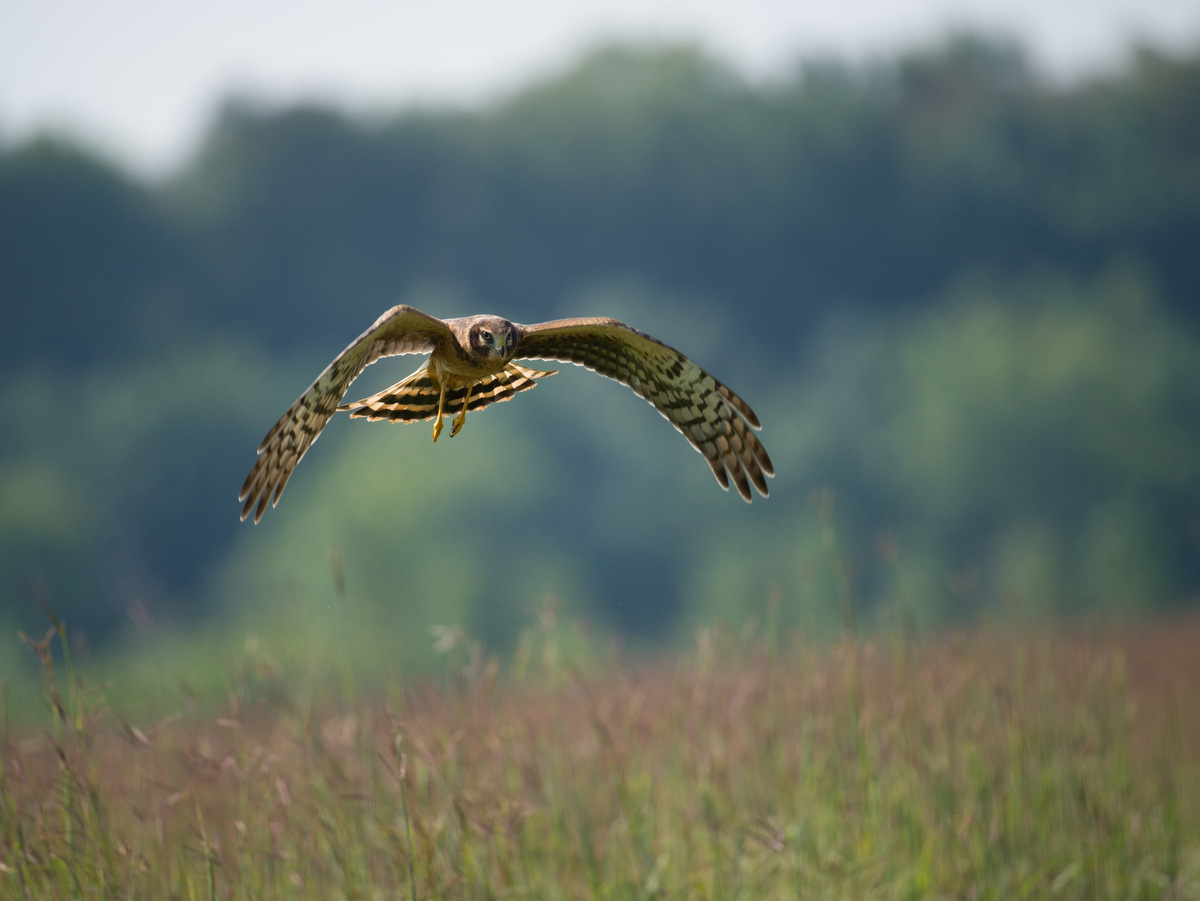 In January, a month when birders across the state and around the world launch headlong into a rigorous endeavor called a Big Year — in which they rush around a given geographic area trying to see as many species as possible — I hunkered down in the Uwharries and became obsessed with a single species.

The Northern harrier, also known as the marsh hawk, is an enthralling raptor. Harriers are large but streamlined. Instead of soaring high in sky like a buteo or weaving through the forest like an accipter, they fly low and slow over large tracts of open land. In the Uwharries, they trace the contours of our undulating grasslands, making their flight especially beautiful. They hug the ground in order to hunt not only by eyesight but also by sound. The squeaks, scratches and scurries of small mammals are funneled toward their ears by facial discs, a trait more common in owls.

Females are the brown and rust of dormant forbs and grasses, while males echo the gray and black of bare trees on the distant hillside. Both have a distinctive white rump patch. From their behavior to their appearance, harriers have a unique appeal.

“You can see why they’re so popular with the general public,” said John Gerwin, research curator at the North Carolina Museum of Natural Sciences.

There are a few records of harriers nesting on the Outer Banks, but their breeding range is generally from the mid-Atlantic to the Arctic tundra. In the Piedmont, they’re most widely observed during fall migration, passing through our region to points farther east and south for the winter. In North Carolina, they’re most common in the coastal plain, which offers vast swaths of their preferred habitat. While their numbers have declined in the Piedmont as development claimed rural landscapes, they can still be found in the Uwharries and even closer to urban areas where there’s appropriate habitat like Mecklenburg County’s prairie restoration sites.

Harriers are known as a leap frog species – the birds that nest farthest north migrate the farthest south. Since the Uwharries are near the northern edge of their winter range, the ones in our fields probably haven’t traveled very far. I often see them passing through in October, occasionally in small groups. Most years, by Thanksgiving, only a lone female remains. She hangs around all winter, working the fields day after day. Harriers can live to be 16, so I’ve often wondered if she’s the same one that returns year after year, or if at some point, a daughter has taken her place.

I was crushed to learn that harriers have low site fidelity, in part because they’re opportunistic in terms of prey. They reportedly move from place to place each year according to the abundance of their favorite species, meadow voles. During fall migration, I once saw a female chase away a male-female pair. I still like to think it was our badass matriarch, defending her winter turf. Maybe she had already sensed the voles were going to be in short supply that year and was warning the competition to move on.

In breeding season, harriers are a solitary species, but in winter, they often roost (on the ground) in communal groups. According to Don Seriff in Birds of the Central Carolinas, up to 20 have been seen on a single day during Christmas Bird Counts at Pee Dee National Wildlife Refuge, a record for the region.

This winter, over Christmas, I started seeing at least two or three harriers each evening, sometimes even six or seven. Females always seem to outnumber the males. As the sun sets, they congregate in a small brushy drain that separates two fields of native warm season grass. First, a couple drift over from the adjacent fields. Once, they even perched briefly on the fence around the house. Others arrive suddenly, as if on a mission, from farther away. They fly high and straight, making a beeline from all directions, across the ridge and over the river. Then they sail together, up and down the drain, measuring its length repeatedly like a careful carpenter. As twilight gives way to dusk, they plop down in the grass or brush, one by one by one.

I hope the harried souls ticking species off a Big Year wish list will also have the opportunity to witness this meditative event. If they encounter a group of marsh hawks at sunset, I hope they’ll lower their binoculars and heavy cameras, let their shoulders relax and feel their chest expand, rising and falling in time with the harriers’ slow, hypnotic flight.