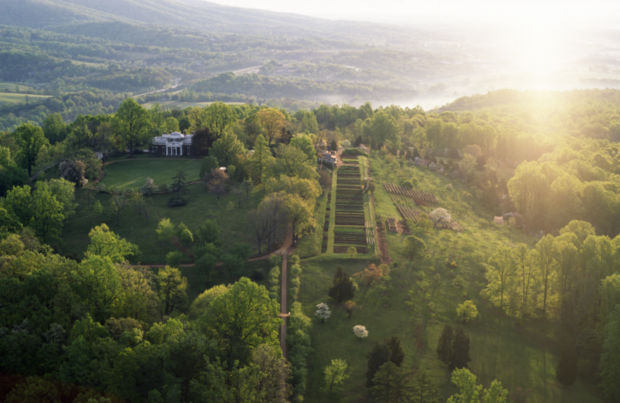 In 1786, John Adams and Thomas Jefferson were in London to negotiate a trade deal and follow up on unfulfilled terms of the peace treaty reached at the end of the Revolutionary War.  When talks bogged down, they took a break to visit the English countryside.  Despite their animosity toward their former enemy, they were taken with the gardens.  They were keen observers of nature and passionate advocates of agriculture, as were George Washington and James Madison.  In Founding Gardeners, British writer Andrea Wulf explores how these interests shaped our national identity.

Life, liberty and the pursuit of happiness are inspiring ideals, but tax and trade issues were at the heart of the Revolutionary War.  In its wake, the founding fathers wanted our nation to minimize imports and exports so we wouldn’t be subjected to the whims of foreign markets.  Agriculture was central to this effort.  Jefferson saw small-scale farmers as the foundation of a free society.  He harkened back to ancient Greece and Rome where farmers were idealized as virtuous citizens, a quality especially important to a new country without a monarch to maintain order through fear and force.  He believed having a stake in the land fostered a strong allegiance to the nation. 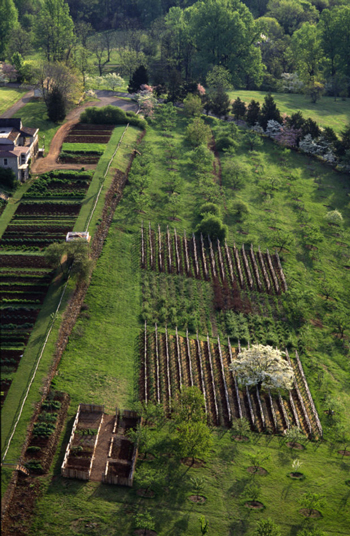 During the Constitutional Convention of 1787, delegates met in Philadelphia to determine how our nation would govern itself.  The weather was unbearably hot, and it was no doubt hotter inside.  The windows were kept shut to ensure the negotiations remained secret, and tempers flared over differences of opinion.  The distribution of power was contentious on many levels – how much should be accorded to the central government and how it should be apportioned among the states.  The delegates were at an impasse.  They took a day off to visit the garden of renowned naturalist John Bartram.  After collecting plants from all 13 colonies, Bartram had established a nursery devoted to our native plants.  There, Wulf says, “The delegates could see how the manifold flora of each state thrived together, their branches intertwined in a flourishing horticultural union.”  Two days after their visit, a few delegates, including those from North Carolina, changed their votes and accepted the plan we now know as our Constitution.

But the discord spilled over into new areas, prompting the politicians to split into parties.  Their differing philosophies affected the development of our capital.  As a Federalist, Washington envisioned a grand city to signify the strong and patriotic nation he and his troops had fought so hard to secure.  A quiet village was a better reflection of Jefferson’s Republican ideals.  During his presidency, he was more interested in westward expansion than the growth of the city around him.  After completing the Louisiana Purchase, he charged Lewis and Clark with finding a route west and bringing back plants and seeds for cultivation.  Lewis’ vivid accounts of the expedition also inspired a newfound pride in our wilderness.  Americans began to see their sublime landscapes as a national treasure, one to rival Europe’s castles and cathedrals.

After serving as president, all four men went back to their land and implemented pet projects.  Washington designed a patriotic border of native trees and shrubs at Mount Vernon.  Adams experimented with manure at his farm in Quincy, Mass.  He tried mixing it with mud, lime and seaweed to optimize its use as fertilizer.  Madison returned to a Virginia in economic decline, the soil played out due to poor farming techniques.  Drawing on ideas from many disciplines, he stressed the balance of nature – we had to learn to live off the land without destroying it.  He became the first American to promote a conservation ethic, both for our agricultural lands and our wilderness.  At Monticello, Jefferson oversaw a massive experimental garden.  He was philosophical about its many failures – he was testing plants on behalf of America’s farmers – but the losses meant he was often forced to buy staples from his slaves.

As proponents of liberty, the Virginians were vexed by the issue of slavery.  Jefferson extolled the virtues of the small-scale farmer, but he himself owned a vast plantation.  They all said they detested the institution, but they didn’t see a way for freed slaves to make their way in a prejudiced society. Washington planned to free them and have them work as tenant farmers.  Madison favored establishing a colony in Africa. The slavery issue plagued our country for many years. We are still challenged by its legacy. Today our nation also struggles with other issues, including the question of how to steward our farmland and protect our wilderness.

The founding fathers didn’t give us all the answers, but the framework and values they bequeathed continue to guide us.  Andrea Wulf – a subject of the Queen – has honored us with the patriotic Founding Gardeners.

Photographs from the Thomas Jefferson Foundation, available from http://monticello.org.