Ghost Tales of the Uwharries 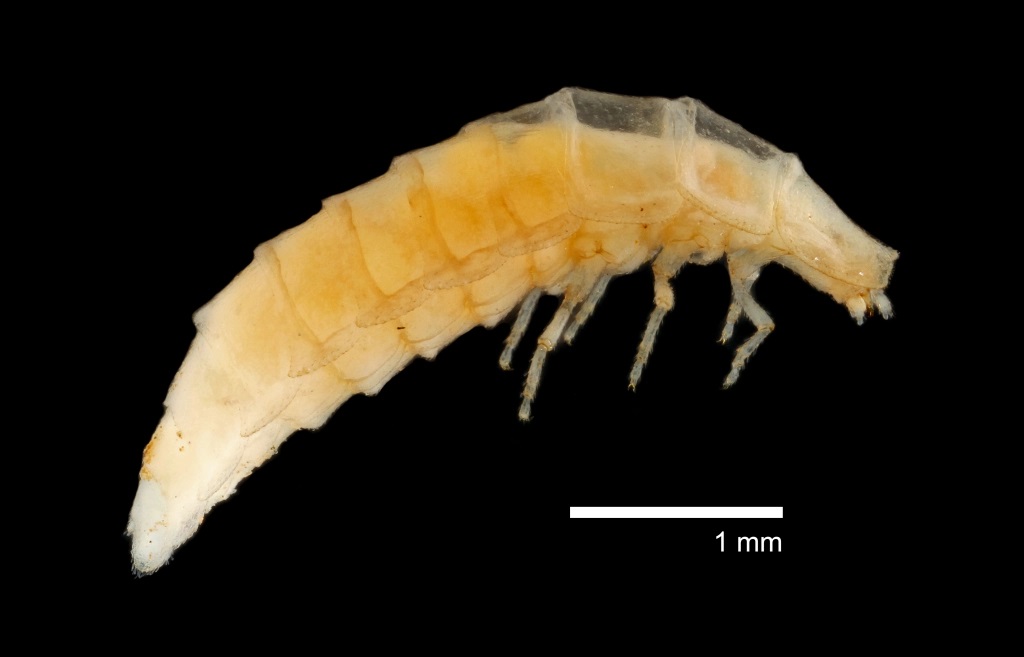 It was a warm, late-April evening in the Uwharries. Conditions seemed auspicious. The skies were clear, and the wind was calm. The moon wouldn’t rise until the wee hours. At dusk, my husband and I threw some camp chairs and a cooler into the bed of the truck. We drove halfway up the mountain near the house, navigating by our parking lights. The tree canopy enclosed the narrow, abandoned road. At 45 minutes past official sunset, we parked at a level spot and scrambled into our chairs.

The night was about as dark as you can get in the Piedmont. A single nightlight burned at a farm a few miles away. The forest was mature and open, dominated by craggy chestnut oaks and contorted sourwoods. The land sloped uphill to our right, downhill to our left. It seemed like a prime location. We were looking for ghosts – not a human apparition, but a certain elusive firefly.

The blue ghost (Phausis reticulata) has long been documented in the Southern Appalachians. Along with the synchronous firefly (Photinus carolinus), their displays have become wildly popular with visitors to the Great Smoky Mountains National Park.

On the darkest nights in late spring, males fly slowly one to four feet off the forest floor, casting a continuous or sputtering light for up to a minute, leaving an eerie blue-green trail in their wake. They display for only 30-60 minutes, on evenings when the temperature is above 60 degrees, and only for two weeks. The wingless larviform females glow in the leaf litter.

There’s mounting evidence this phenomenon might be widespread — but seldom observed — in the Piedmont, including the Uwharries.

Last spring, Uwharries resident Catherine Hines happened to spot a surprising display while she and her son were stargazing near Lake Tillery.

“Mom,” her son said, with nervous uncertainty. “What are those lights moving through the woods?  Is it some kind of animal?”

She knew they were witnessing something special — she’d once seen a similar event while camping along Wilson Creek in the Pisgah National Forest. That experience led her to believe they were indeed seeing blue ghosts, even though the species had never been recorded in the Uwharries.

This spring, she eagerly awaited the fireflies’ return, checking for them every few nights. They finally appeared the first week of May, when evening temperatures moderated after a lingering cold spell. Their displays occurred in the same location as the previous year. One night, she managed to capture a female. Her friend Deb Russell took high quality photos.

As reports of blue ghost sightings trickled in from counties around the Triangle in recent years, Clyde Sorenson, an entomologist at N. C. State University, teamed up with Christine Goforth, head of citizen science, and Jerry Reynolds, head of outreach, at the N.C. Museum of Natural Sciences to educate the public and provide a portal for reports. Hines and Russell submitted their observations and photos, and the Carolina Ghost Hunt team has already confirmed their sightings as the first from the Uwharries. 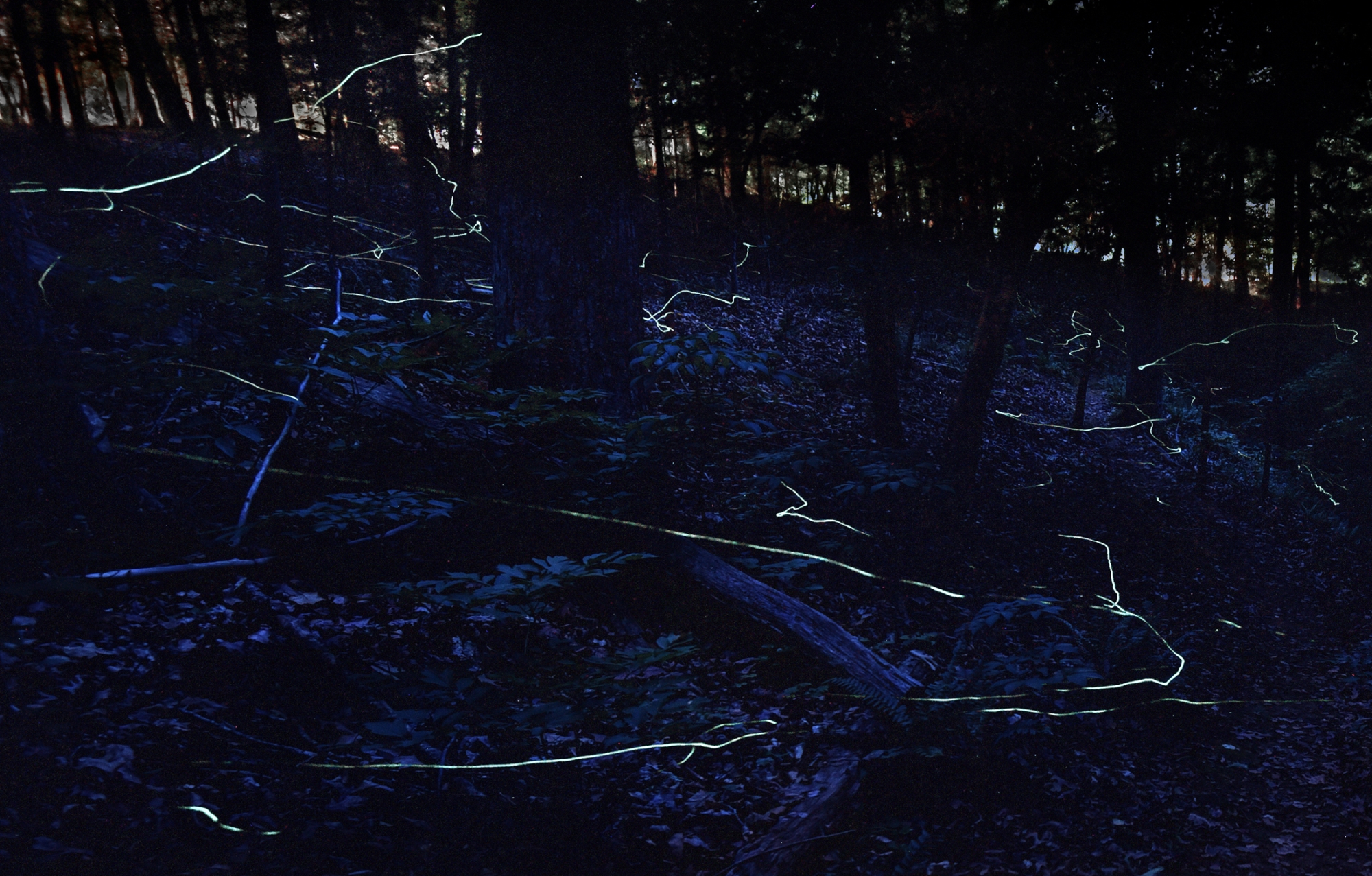 In addition to simply collecting information on the firefly’s distribution, Dr. Sorenson wants to determine if these blue ghosts in the Piedmont are a disjunct population of those in the Appalachians or if they’re an entirely different species previously unknown to science. Early data suggest the latter. Thus far, on all the Piedmont specimens that have been collected, the females have only two light lanterns instead of the four to nine typical of the species, and the males have smaller light organs.

How ironic and poignant – a firefly that emits considerably less light occurs in the state’s most urban region. Light pollution is the bane of many nocturnal creatures, especially fireflies. Are the blue ghosts doomed in our rapidly urbanizing Piedmont? Are they vanishing before we ever fully appreciate their presence?

In early May, my sister and I tried a different spot a little lower on the mountain, hoping for better luck. It was pleasant enough, with bats and cricket frogs, but still no blue ghosts. We gave up after half an hour, wondering if we needed to abandon the dry uplands and search for a good location closer to a water source. When we returned to the house, thousands of spring 4-flashers (Photuris quadrifulgens) were twinkling with abandon in our fields of native warm season grasses.

We enjoyed this consolation prize. As we were about to head inside, a dramatically different flash pattern approached from our left. It passed slowly right in front of us, right at eye level — a continuous, stuttering flash. It even made a U-turn and passed us again before going dark, as if to say pay attention!

We waited in vain for another flash, but it was getting late. This was unlikely habitat for the blue ghosts, but maybe a male had strayed from an adjacent wooded drain or a nearby grove of hickories and oaks.

We’ll continue hunting ghosts in the coming weeks. If these blue ghosts have a life cycle similar to those in the Appalachians, there might be another, smaller peak in early June.

Catherine Hines is convinced they’re common in the Uwharries, discretely thriving in vast swaths of forest that can be daunting to explore at night, especially given our healthy population of timber rattlers. She and Russell have expanded their search and have found them in several areas beyond the spot where she first encountered them. For her, finding the blue ghosts in the Uwharries is a metaphor for life – to see, you just have to look.