The historical roots of the racial wealth gap in Charlotte 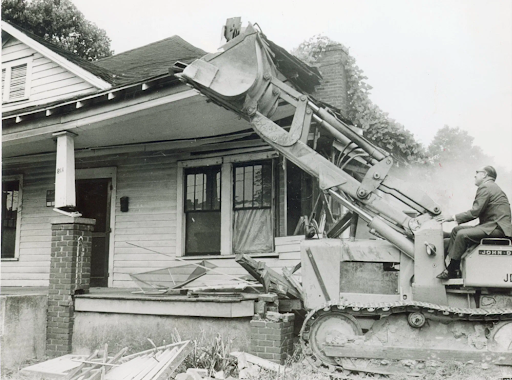 This is the second in an ongoing series, based on a report by the Urban Institute. Read Part 1 here. The report was compiled with support from Bank of America, ​which partners with the UNC Charlotte Urban Institute and the Institute for Social Capital on research that provides insight into community initiatives. Join us each Wednesday at 7:30 p.m. on Twitter for a discussion, using the hashtag #WealthGapWednesdays to follow along and ask questions.

Wealth is more than money. While simply defined as the net amount of assets over liabilities, wealth functions in more expansive ways. It opens doors to homeownership, no-debt or low-debt education, business ownership, and the ability to weather personal and national emergencies.

The Brooklyn neighborhood, once located in Charlotte’s Second Ward, was a thriving Black community — until the bulldozers rolled in, hailed by city leaders and backed by the full weight of federal policy.  The story of urban renewal in Brooklyn is one of many such stories shared across the nation. Federal, state, and local policies upended wealth and generational potential in Black, Latinx, and Indigenous communities.

Urban renewal was just one of many policies that have contributed to the racial wealth gap since European settlers arrived.

Slavery and the seizure of Indigenous lands and resources powered the economic system and seeded the racial wealth gap in the U.S. Laws and reforms such as Jim Crow, the New Deal, and the GI Bill also explicitly and implicitly excluded certain populations from building wealth.

Housing, transportation, labor and criminal justice policies among other policies, have contributed to and sustained the racial wealth gap over generations, despite many reform efforts.

Here’s a look at some key features of wealth accumulation and how they’ve historically hindered members of marginalized communities:

Wealth as a Safety Net

These policies have enabled certain families to build wealth while excluding and limiting others. The accumulated wealth serves as a safety net for recessions, job loss, illness and other unanticipated tragedies.

Amid the coronavirus crisis, those that lack wealth and the safety net it provides are hit hard. Some families will dig into, and likely exhaust, existing savings to get by during this unprecedented time of high unemployment — if they have savings at all.

The impact of crises further widens the racial wealth gap, leading to greater inequity and limited safety nets when another crisis arises. The Great Recession (2007-2010) negatively impacted the net worth of all households, but White households were able to recover quicker. Overall, White households lost 13.9% of their wealth between 2010 and 2016 —  while Black households lost 29.5% of their wealth, further widening the racial wealth gap. 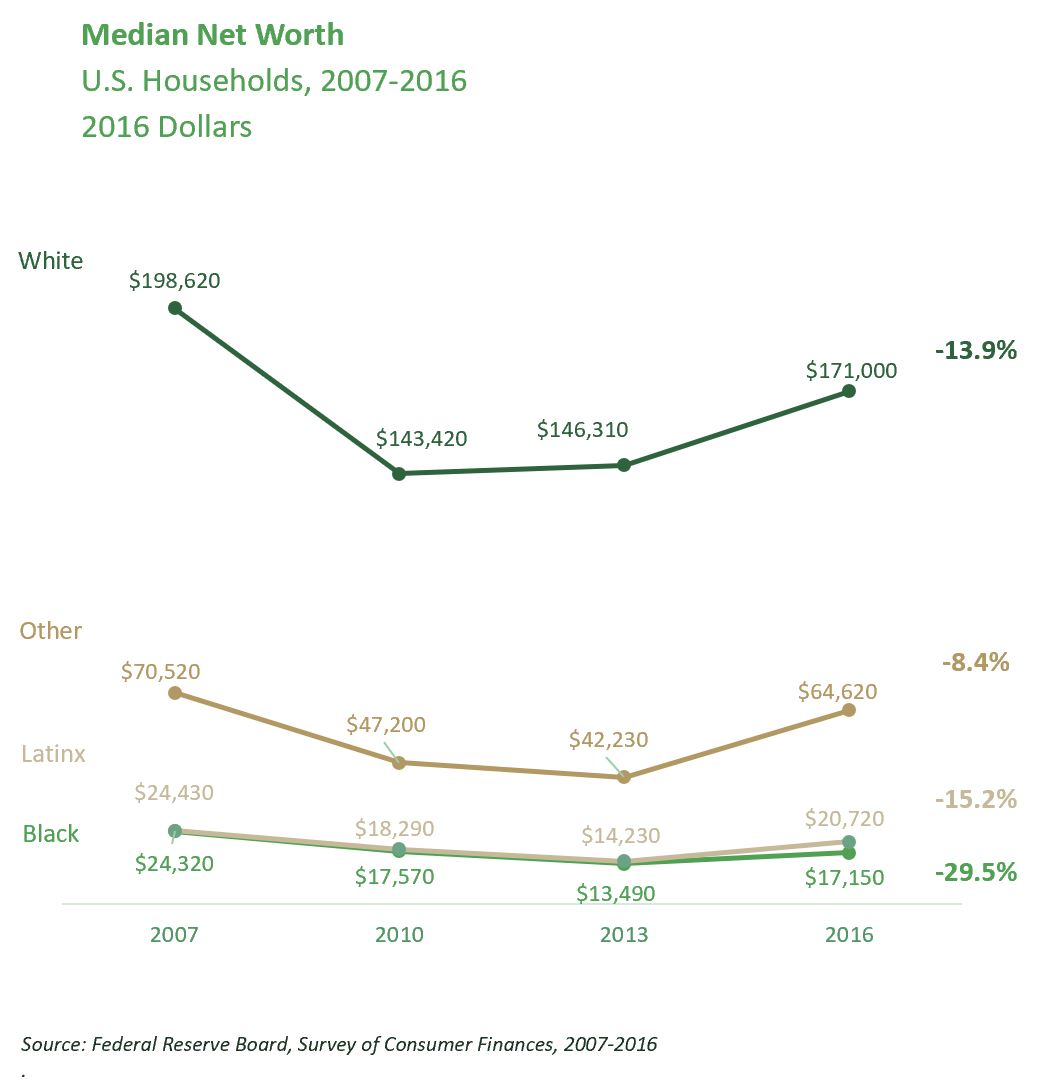 In the period following the recession (2010-2013), White households stopped losing wealth and began to recover, while Black and Latinx households continued to lose pre-recession wealth. Not until several years later did median net worth begin to rise among these households. 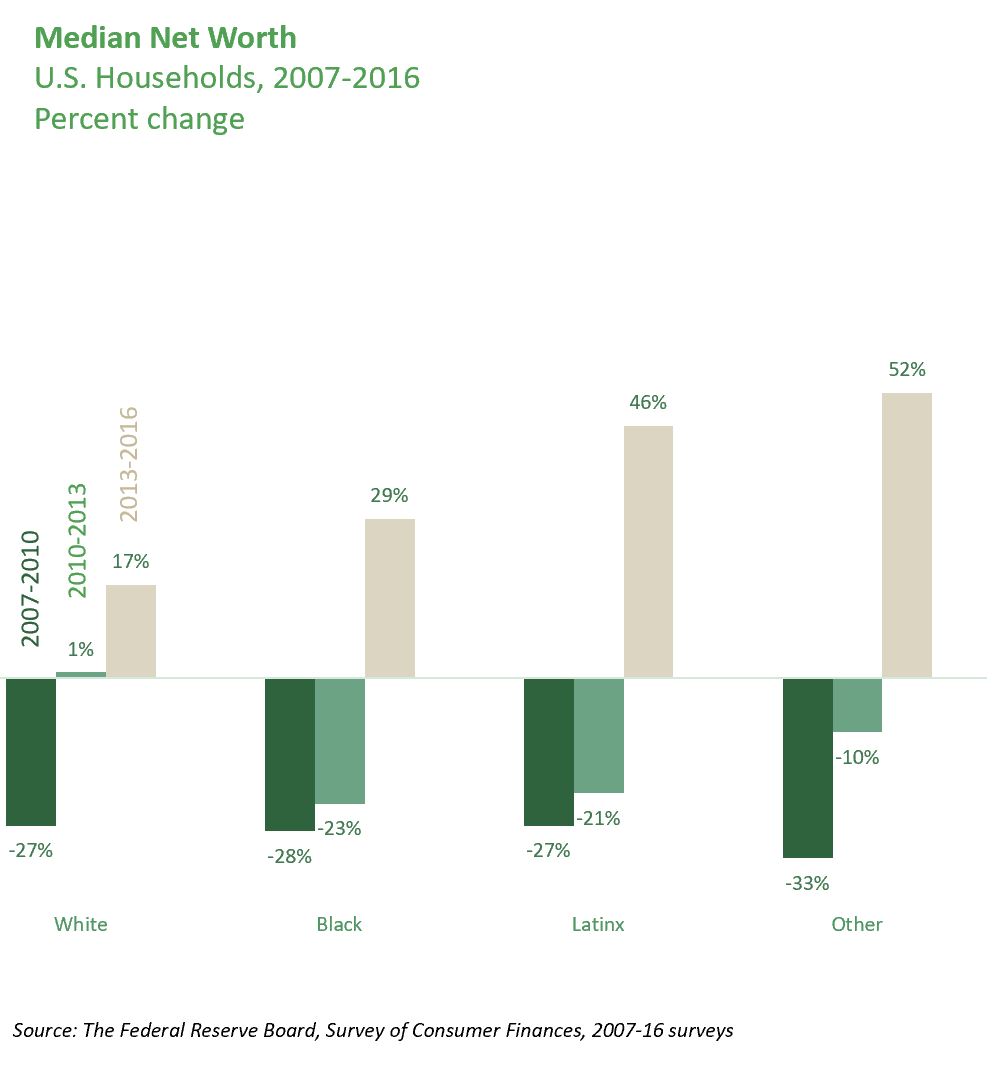 Understanding the racial wealth gap is a challenge

Identifying simple causes of this disparity is challenging. The racial wealth gap in the United States has been historically shaped and sustained by multiple policies and legal practices. This historical variation and complexity leads to significant measurement challenges and makes wealth difficult to understand. Wealth, and access to it, is complex in several ways:


Because of this complexity,  closing the racial wealth gap will require understanding and addressing  multiple facets — housing, income, and now, the impact of the novel coronavirus.

This pandemic is both a spotlight and a warning, highlighting the inequities already built into our economic and social systems and the dangers if we persist in not correcting them. History is not destiny, and systems are not permanent. We have an opportunity to address the impacts of this history — but only if we choose to do so.