How the cost of widening a Matthews road increased 10x

This story was originally published in Transit Time, a collaborative newsletter published by The Charlotte Ledger, WFAE and the UNC Charlotte Urban Institute.

Like a lot of roads in the Charlotte region, Matthews Township Parkway (N.C. 51) is becoming more congested.

Apartments, office buildings and shopping centers are cropping up nearby. Downtown Matthews is becoming a hotspot. The nearby Novant Health hospital is expanding. Matthews Township Parkway is one of the major east-west streets in Mecklenburg County, connecting Independence Boulevard to the Arboretum area.

Local leaders foresee that traffic on N.C. 51 is only going to get worse, and they want to do something about it. But here’s the problem: Even though plans to improve a mile-long section of N.C. 51 have been in the works for at least eight years, construction could still be another seven years away — or more. The North Carolina Department of Transportation simply doesn’t have the money to make it happen.

The push to reduce traffic congestion on Matthews Township Parkway illustrates the larger challenges facing road projects throughout the Charlotte region and the whole state: Costs of labor, materials and land are escalating. Revenues from gas taxes have fallen. Last year, NCDOT said its shortfall on funding for transportation projects ballooned to $12 billion — nearly double the gap reported less than a year earlier.

Since last summer, the state has revised more than 1,000 separate estimates for right-of-way, utility and construction costs in more than 450 transportation projects. As a result, the state is pushing back dozens of road projects in the Charlotte area. Local transportation planners are expected to get specifics on which ones later this year.

Although the Matthews project is one of many across the state being delayed, it is distinctive in one regard: It has the largest cost increase of any state road project in the Charlotte region, at 966% — more than a 10-fold increase. Its original cost was about $4 million. It is now on the books as $42.5 million. 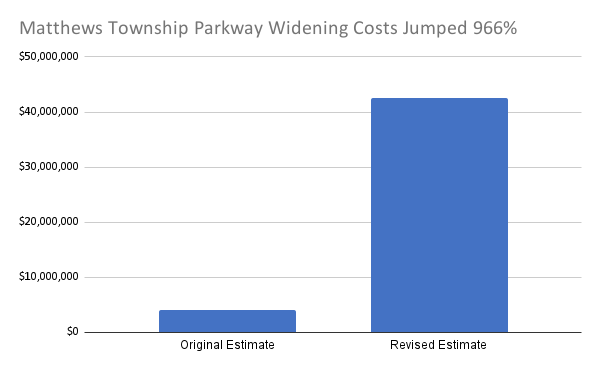 To understand how that happens, you need to understand a little bit about the process of building roads. The NCDOT is responsible for many of the biggest roads in Charlotte, including Matthews Township Parkway. Municipalities like Charlotte largely handle smaller roads, like neighborhood streets.

Making improvements to a state road is a long and complex process that involves individual cities and towns, regional transportation planners and the NCDOT. Between the years it takes from an idea to go to construction, there are countless studies and meetings to determine a project’s feasibility, design and cost — and whether it can be placed on the state list of projects that are funded.

In the case of N.C. 51, local transportation planners say they believe the project was first identified by the town of Matthews around 2013. Matthews suggested it to the Charlotte Regional Transportation Planning Organization, which submitted it to the state for consideration in 2014. A planning document from that time shows that the state gave it the fourth-highest priority out of 44 projects. It was listed as “widen from 4 lanes to 6 lanes, with median and multi-use path,” at a cost of just over $3.9 million.

The state then cleared the project to be funded in its 2016-2025 planning document.

The cost estimate of nearly $4 million was based on the typical cost of adding lanes statewide. But as planners started digging into details of widening N.C. 51, they realized that their early estimates were way too low.

“When this project was initially funded, they had an automated tool developing the cost based on the real estate prices and what it would cost throughout the state to widen a road,” said Neil Burke, deputy director of the Charlotte Regional Transportation Planning Organization. “That process was flawed, because it was done at a very high level. There are unique things about every project throughout the state. Things don’t cost the exact same in Matthews as they would in Murphy.”

For instance, the cost of acquiring land in Matthews could be much higher than state averages.

In addition, as state traffic engineers started digging into the specifics, it became clear that more would have to be done than adding a couple lanes. The stretch of road already handles more than 33,000 vehicles a day, according to a 2020 study, and traffic was expected to increase so much that the project needed to expand in scope.

“Once we dug into it and started looking at 2040 volumes and did a traffic analysis, we went, ‘It’s not going to be that simple,’” said Sean Epperson, a division project development engineer with NCDOT. “We can’t add a lane in each direction and address the congestion issue.”

State documents from 2018 and 2019 show that engineers considered various alternatives, in addition to more lanes — with a particular area of focus on improving the intersection of N.C. 51 and Monroe Road/John Street. For instance, they examined the feasibility of having turn lanes go behind businesses on the corners of that intersection, like this: 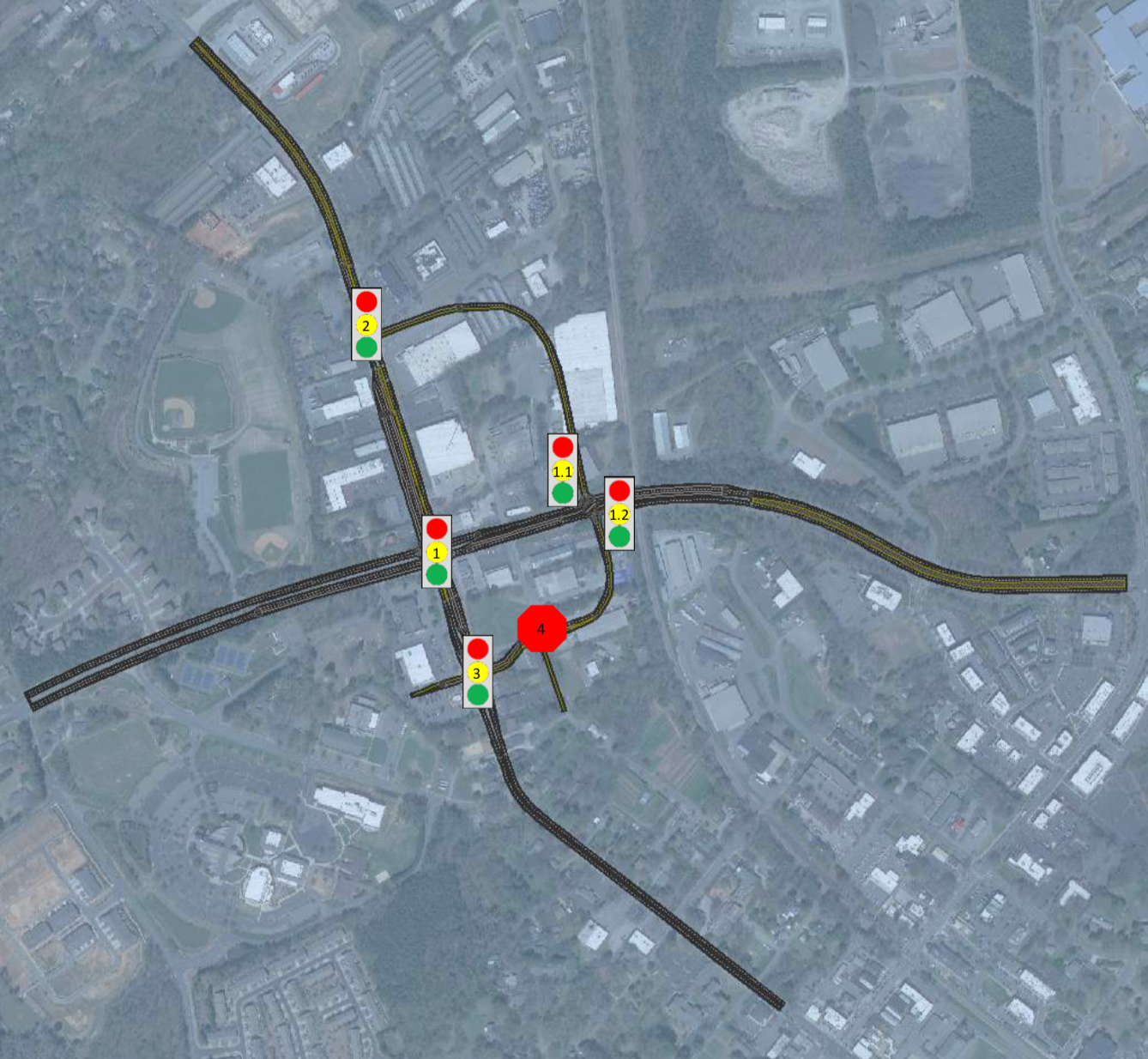 Ultimately, they settled on constructing what is known as a partial continuous-flow intersection, or CFI. At the intersection, there would be left turn lanes that have already crossed over the lanes with traffic coming the opposite direction. That makes green lights more efficient, engineers say, because oncoming traffic going straight doesn’t have to wait for traffic turning left. (If you want to geek out on how these intersections work, check out this two-minute video with officials from Florida explaining it.) 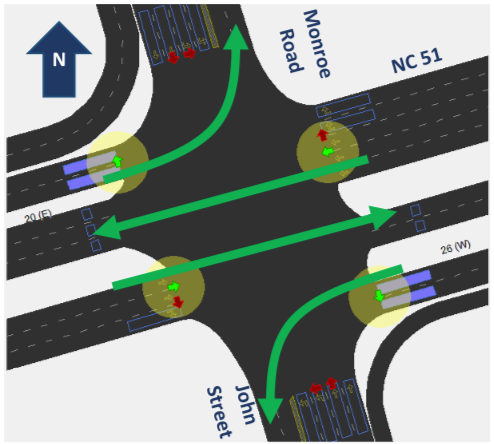 That design would greatly expand the size of the intersection, which requires the purchase of more land and moving underground utilities — which increases costs.

“It leads to a much more expensive project, unfortunately,” Epperson said.

Construction was initially expected to start by 2023, Epperson said, but in 2019, it was put on hold as budgets got tighter. It was still considered “funded,” but engineers have more design work to do. Once the project resumes, Epperson says it still needs about one year of design work, plus about two more years to acquire land.

As of right now, the N.C. 51 project is considered funded but on hold, with construction tentatively scheduled for 2029. The dates could change as the state re-evaluates hundreds of construction projects — many of which have had costs rise, though few as dramatically.

Engineers say they are confident that the new projected cost — $42.5 million — is much more accurate that those early estimates. 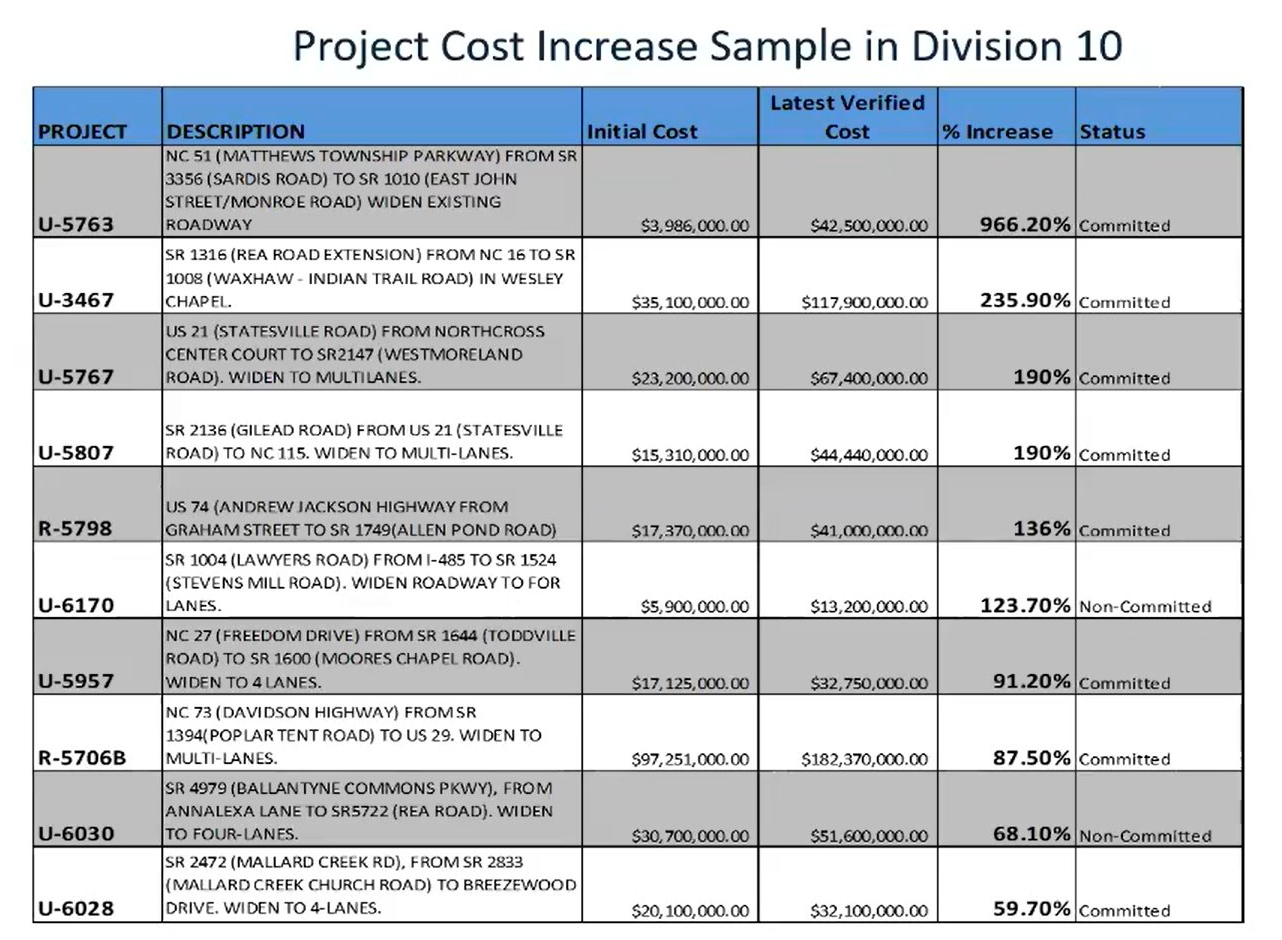 At a recent meeting of Charlotte-area transportation planners, an NCDOT representative shared examples of some of the surging cost estimates of local road projects, which rose between 59.7% (Mallard Creek Road) and 966.2% (Matthews Township Parkway).
Transportation officials say the delayed projects across North Carolina point to the need for new sources of road funding, which now come mostly from gas taxes. As Charlotte and other urban areas grow, so do the needs for traffic improvements — and the money isn’t keeping pace, they say.

Matthews leaders say completing the project remains toward the top of their wish list.

Tony Mecia is editor of The Charlotte Ledger.