How does philanthropy vary across, and connect, the greater Charlotte region? 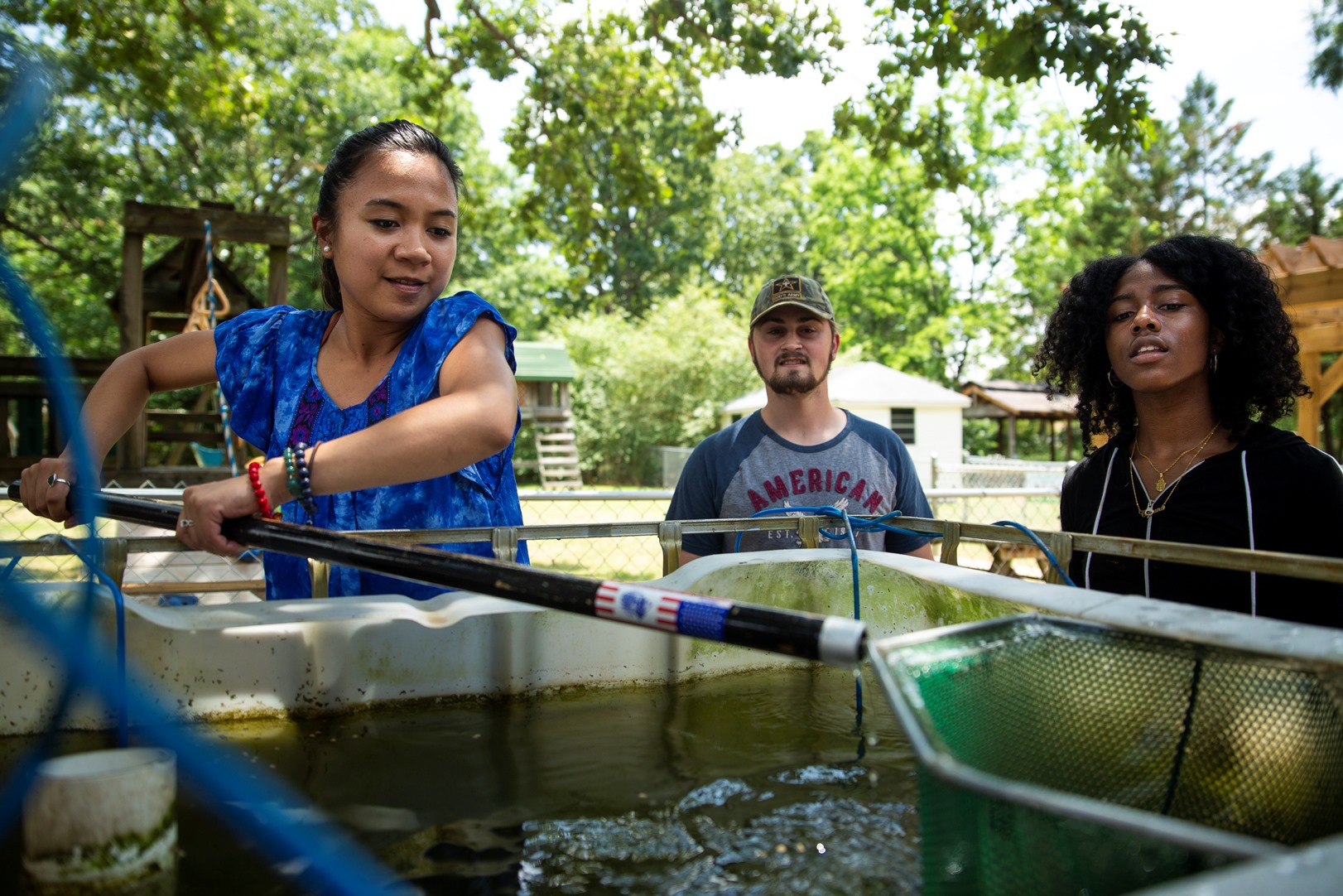 Charitable giving is an invisible thread binding people and communities together across the 32-county Carolinas Urban-Rural Connection study region — but how much people give, and what resources are available, varies from place to place.

Giving to charity is one of the most common ways to help people in distress, support a cause or meet an immediate need. The amount of charitable giving in a community is often used as an indicator of civic engagement and well-being. Some commentators make a distinction between charitable giving, which helps to reduce or eliminate immediate suffering caused by social problems, and philanthropy, which assembles charitable and other funding sources and focuses them on the long-term elimination of those problems.

Both charitable giving and philanthropy are important to community and economic development in any given state or region. They fill the gaps where government and corporations cannot, they show strategies that can work to tackle important issues, and they provide support for the multitude of nonprofits that are the lifeblood of any community.

Here are four things we learned by analyzing the data:

How much is given to charity in the region?

On average, households in the 32-county Carolinas Urban-Rural Connection region give almost $3,200 to charity every year. That adds up to a regional total of $4.6 billion.  If grants and donations from foundations, bequests, and corporations are included, the amount rises to $6.75 billion. This is a significant contribution – for comparison, the City of Charlotte’s budget for 2019 is $2.6 billion.

A recent report on philanthropy for the year 2018 estimated that money given for charitable purposes in the U.S. totaled almost $428 billion: $292 billion was given by individuals and households, $76 billion by foundations, $40 billion through bequests, and $20 billion by corporations. 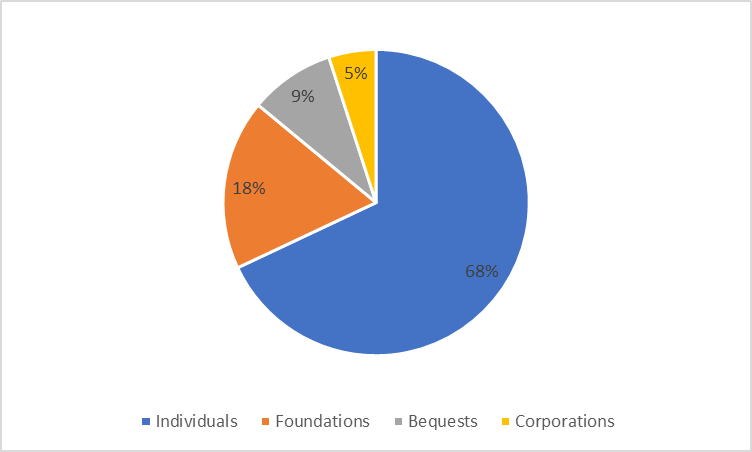 The latest available IRS data on itemized charitable giving at the county level is from 2016. For the 32-county study region, the itemized total was over $2.7 billion. Assuming this represents 60 percent of total individual and household charitable giving, the region’s households gave approximately $4.6 billion to charity in 2016 – equivalent to $3,194 per household.

Does giving to charity vary across the region?

As might be expected, 40 percent of household charitable giving in the region comes from Mecklenburg County. However, estimating household giving as a proportion of household income shows a more even distribution of generosity across the region.

The first map shows how total estimated household charitable contributions by county are distributed across the region: $1.8 billion (39.5 percent) comes from Mecklenburg County, with over $1.3 billion from the five next-most populous counties of Union, York, Cabarrus, Iredell, and Gaston. The second map shows estimated household charitable contributions as a proportion of total household income by county across the region.

The highest proportions are to be found in Polk (5.1 percent) and Davie Counties (4.6 percent), with ten counties, including Mecklenburg, in the range of 4.1 to 4.5 percent. The regional average is 4.2 percent. 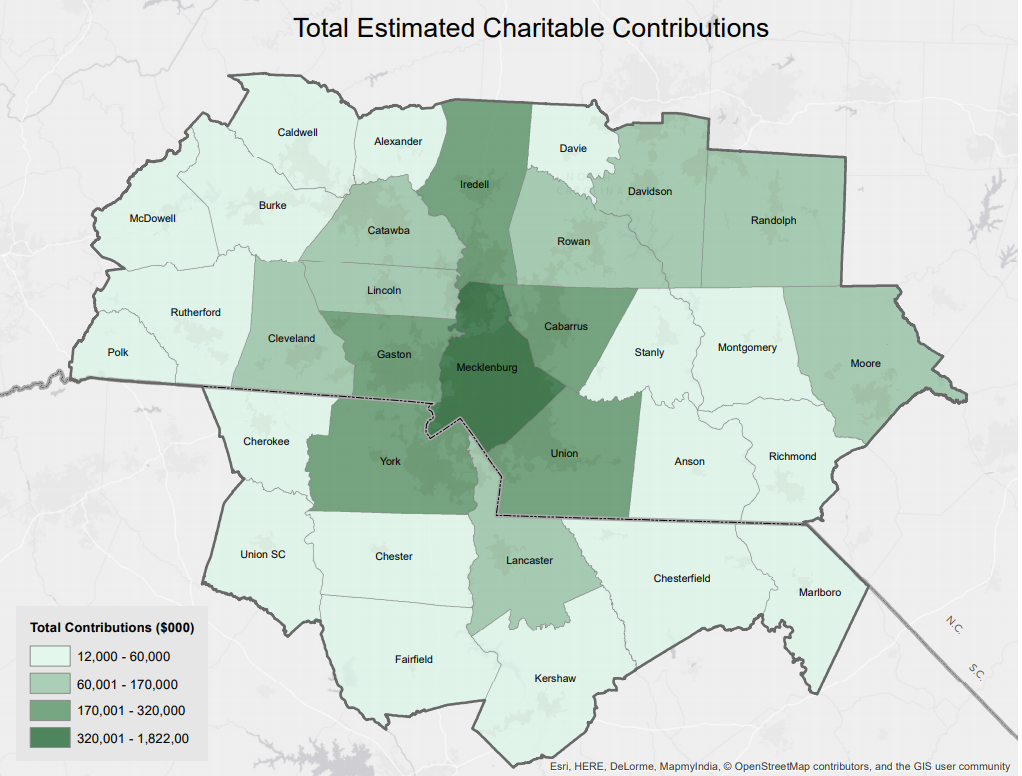 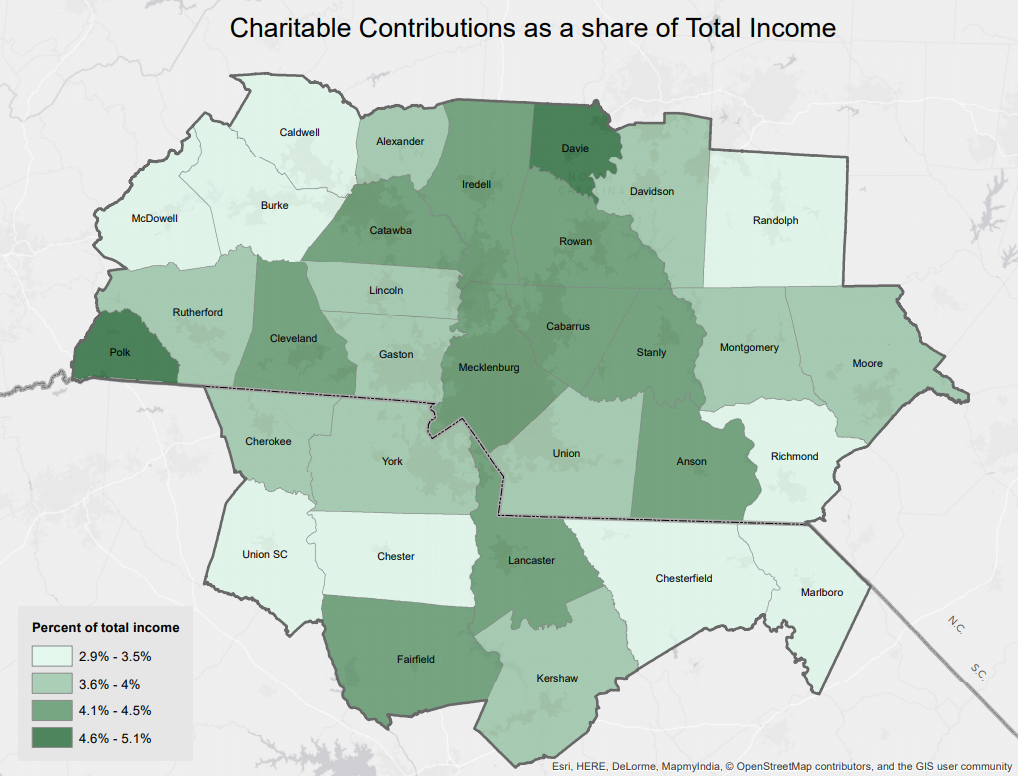 What is this charitable giving used for?

Nationwide, about one-third is donated for religious purposes, with just over another third directed to education, human services, and foundations.

No information is available on how this money is used by religious organizations at the national, state or local level. It can be assumed that most of these funds are used to cover the capital and recurring costs of running these institutions and support their work with their congregations. However, there is evidence to suggest that in urban centers, sacred places have significant economic impact through the employment of staff, purchases of goods and services, and the attraction of visitors for worship, events, education and welfare. A study of congregations in Chicago, Philadelphia, and Fort Worth showed that on average each sacred place generated $1.7 million in economic impact.

Parallel research is underway to look at rural sacred places and their impact (Note:  The Urban Institute is currently working with Partners for Sacred Places on the rural study, funded by The Duke Endowment). Anecdotal information suggests that many are struggling for survival and that, in some cases, there is ongoing support coming from urban congregations to sustain their activities. 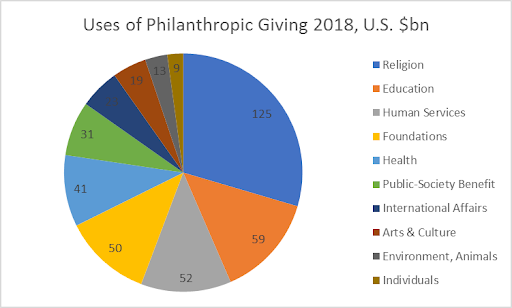 How much charitable giving is directed towards philanthropic activities in the region?

The Council on Foundations describes community foundations as grantmaking public charities dedicated to improving the lives of people in a defined local geographic area, often a county.  They bring together the financial resources of individuals, families, and businesses to support the work of nonprofits in their communities. Here are the seven community foundations that have a presence in the Carolinas Urban-Rural Connection region.

The Foundation for the Carolinas (FFTC), headquartered in Charlotte, is by far the largest. FFTC has 13 affiliates, all within the Carolinas Urban-Rural Connection region. The following table lists the affiliates, with the top three program investment areas for each.