I-77: Expressway to prosperity 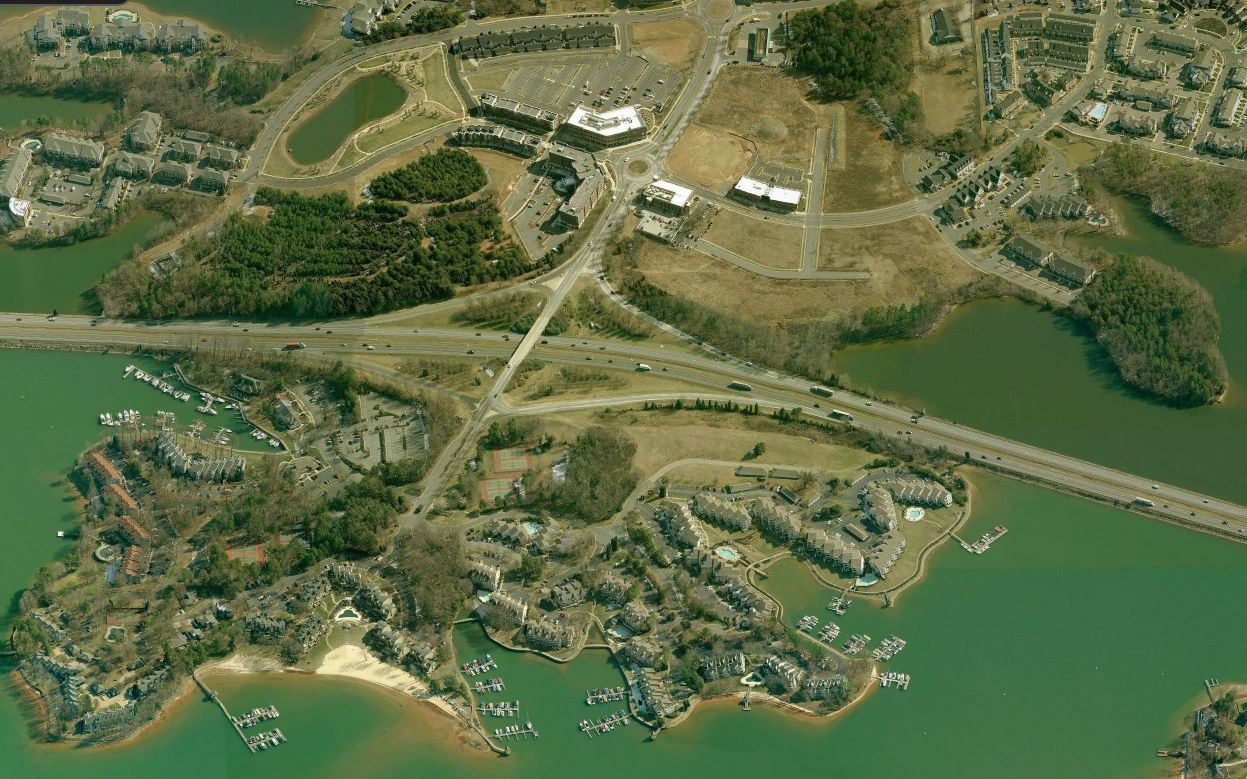 The following is an excerpt from Chuck McShane’s new book, A History of Lake Norman: Fish Camps to Ferraris, published by the History Press.

“Lake Norman may seem as fixed a part of the hillsides that enfold it,” began the Charlotte Observer editorial on Oct.1, 1977. “But it is a baby, scarcely older than a June high school graduate… How quickly that new landscape has come to seem natural. Yet, like the youngster the lake still is, it has not yet delivered the impact of which it is capable. That will come.”

The first decade of growth on the lake had been slow—a cluster of cabins here and a marina there. The lack of infrastructure and the distance from major population centers had kept growth in check. Events, some planned and some unforeseen, conspired to change that in the 1970s. Plans for the Charlotte-to-Canton, Ohio-Expressway project had been announced about the same time the lake project started. Later, that road would become Interstate 77. Construction delays meant the 20-mile segment from Charlotte to Davidson would be the last to open. 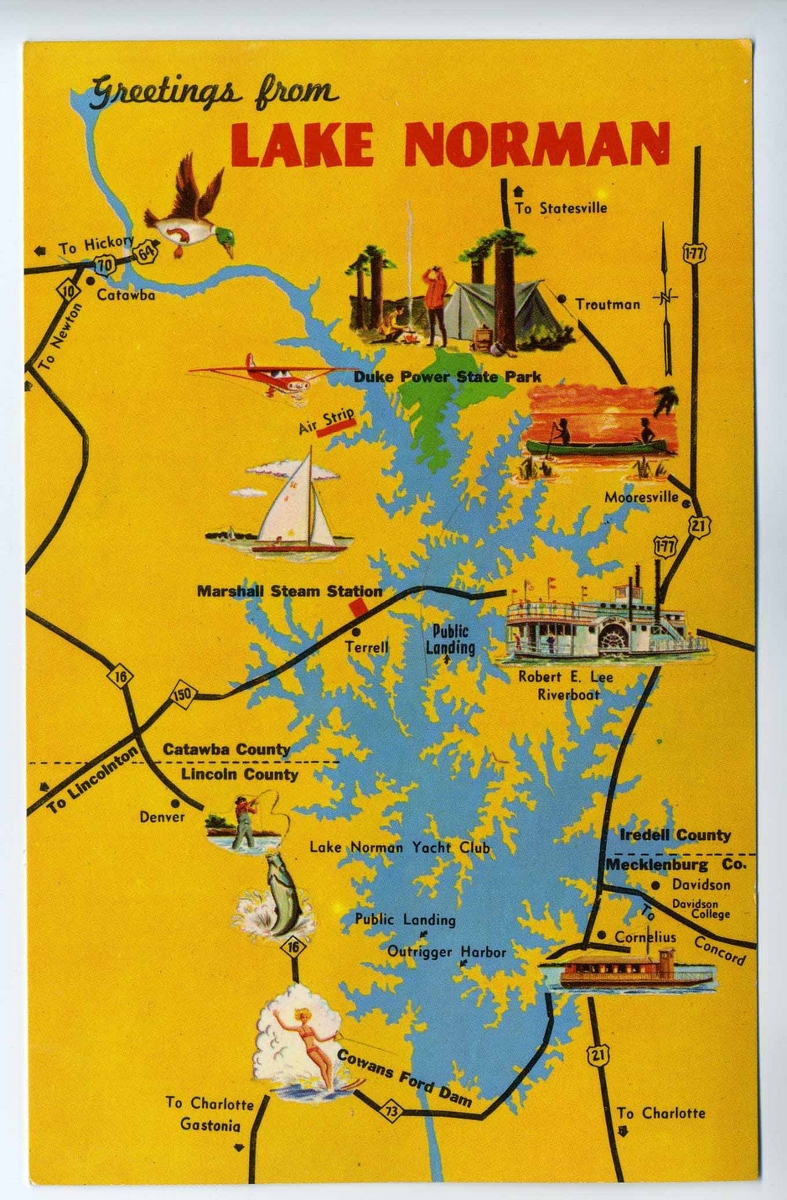 On nights and weekends after the construction crews had leveled the roadbed, Mooresville teens would sneak their cars onto the entrance ramps and drag race, then find a place to cool off in the water, leaving their cars on the roadside, caked in red clay. One night in October 1975, a Mecklenburg County sheriff ’s deputy named Bobby Ray Pence chased a fleeing suspect north on the almost-finished interstate and through the construction barricades. Metal reinforcement bars lined the highway, ready for the next day’s pour of concrete. As Pence’s patrol car sped onto the unfinished lanes, a 35-foot section of that rebar pierced the car and Pence’s leg, pinning him to his seat. Rescuers had to remove the front bench seat and rush Pence, still connected to his seat, to the nearest emergency room. There, it took two hours to remove the piece of metal.

After the interstate opened on New Year’s Eve 1975, it changed local perception of distance to Charlotte. What had been an hour-long ordeal now became a 25- to 30-minute jaunt. Visits to weekend cabins became more frequent. Day trips to the public access areas increased, too.

All of a sudden, commuting didn’t seem so crazy. At Exit 28 in Cornelius, the Ham and Eggs restaurant opened, providing interstate travelers a place to eat and locals a place to people-watch. The interstate inspired some outlandish plans, too, like the proposal to open a Marine World aquarium, yacht club and convention center on the outskirts of Davidson at Exit 30. The Davidson Town Board shot that one down in 1973, refusing to extend sewer lines to the area.

Despite the long-standing recession and energy crisis, the interstate brought a wave of housing starts to the area. In fact, the energy crisis might have helped the housing boom. Duke Power had been flying high in the 1960s. In the 1970s, like most investor-owned utilities, the company hit a rough patch. From 1970 to its low point in 1974, the company’s share price lost more than half its value, plummeting from $24.75 to $10.50, according to historian Robert F. Durden. It could have been worse. Consolidated Edison, a northeastern utility, had to stop paying its dividend to shareholders, shocking investors who believed utility stocks were safe, almost guaranteed bets for solid and consistent dividends. In the past, Duke Power had been able to shore up its stock price by having the well-funded Duke Endowment buy up many of the utility’s shares. The Tax Reform Act of 1969, however, limited the endowments’ ability to do that by capping endowment investments at 25 percent of the company’s shares. New environmental regulations and increasing coal prices also added to the company’s costs.

These tough economic times caused Duke to reconsider the cheap long-term leases that had provided weekend cabins for so many. Taking a closer look at land values around the lake, Duke and its subsidiary Crescent Land and Timber realized they could cash in by selling some of the land, and they could lease the lots for thousands more than they were getting. Duke renewed leases at higher rates and began selling off some lots. In 1977, lots were selling for $10,000 to $15,000 an acre.

In the late 1970s, it seemed that almost anyone who had much clout in Charlotte had some sort of presence on the lake. Superintendent of Charlotte-Mecklenburg Schools Jay M. Robinson bought a house on the lake, followed by hospital executives and top management from the Timken Steel Co. in Lincolnton. After IBM opened a large office on Charlotte’s northeast side, executives built more and larger homes there. Less prominent citizens could still find lakefront lots, too. So many Piedmont Airlines flight attendants and pilots had places to rest and socialize during their often off-kilter schedules, that pilots from other airlines named Lake Norman “Piedmont Pond.”

The Charlotte Chamber of Commerce began showing the lake area to executives of companies they wanted to recruit. New corporate headquarters like Eastern Airlines and IBM had found a home in Charlotte, and now others were interested. The lake became an asset in luring executives to the area. “We were able to offer an attractive alternative for those executives,” former Charlotte Chamber of Commerce head Carroll Gray said, in a 2014 interview with the online show Lake Matters. “We were able to show them acre after acre of greenfield sites and the lake itself.”

Mecklenburg County planners estimated that the number of lakefront homes increased from 600 to 1,600 from 1972 to 1977. In Lincoln and Iredell counties, 54 percent of all growth between 1970 and 1975 happened on or near the lake. Catawba County’s shoreline remained the most undeveloped.

For Charlotte residents, a move to unincorporated Iredell County could cut tax rates by two-thirds, from $1.64 per $100 to 50 cents per $100. More than a handful of Charlotte residents had moved across county lines to avoid the recent Swann v. Charlotte-Mecklenburg Schools decision, which required cross-town busing of students to achieve integration. In Iredell County, Mount Mourne Elementary School, the closest elementary school to the Mecklenburg County line, saw its enrollment double in less than 10 years.

Even in Catawba County, where growth had been much slower, demand for solid waste services increased. In the tiny Denver area, the Westport subdivision boomed. Homes were selling for as much as $150,000 ($588,000 in 2014 dollars). Doctors and dentists, shopping centers and drug stores followed the crowds west “over the river,” as some locals still said.

More and bigger developments were on the way, like the Mallard Head Country Club, which included 300 homes, bringing a golf course off the Brawley School Road Peninsula. As a hint at the coming exclusivity of the area, developer John Campbell considered running a limousine service from the club to downtown Charlotte and back. Other developments included townhomes and condominiums, like the new Mariner Villas outside Cornelius. A new land development company, called the Lake Norman Company, made plans to develop the 200 or so acres surrounding I-77 in Davidson with townhomes, tennis courts and commercial developments.

These lakeside developments, along with other redevelopment attempts along Griffith Street, which was the main thoroughfare from the lake and I-77 to Davidson College, would cause tension in the town of Davidson. The west side of town had traditionally been home to Davidson’s black community. Many of the plans included the removal of the modest homes owned by black families for generations.

“They want to uproot us, to move us out,” one west-side Davidson resident said of plans for a park on Griffith Street near Lake Davidson.

Even as, in the Observer’s words, the lake’s “space and quiet become more valuable each year in the larger, more complex city that Charlotte is becoming,” the lake’s future was little considered. “Twenty years from now, it will be as basic a part of this community as The Square or Freedom Park. One flaw of the Charlotte-Mecklenburg Planning Commission’s generally admirable 1995 Comprehensive Plan is that it scarcely mentions the lake and its impact.”

The Observer wasn’t the first to notice the problems of planning on the lake. And the 1970s wasn’t the first time anyone had worried about the lake’s future. All the way back in 1967, the Mecklenburg County planning commission had called for action. In 1972, a University of North Carolina study found Lake Norman had the least amount of public recreational land per person than any other area of the state. “If Lake Norman follows the pattern of other urbanizing lakes in the nation,” the report read, “much of its recreational value to the region will be lost. Congestion comes to equal, and sometimes exceed, that of urban areas. Open space disappears and escalating property values foreclose public acquisition of land for outdoor recreation.”

Part of the problem was geography. Back in Colonial times, the Catawba River provided a logical natural boundary for dividing up counties. After the dam filled the floodplain above Cowan’s Ford, the shorelines of the lake touched four separate counties. The towns nearby, whose leaders had plans to annex the land as it developed, also wanted some say in the planning process. Complicating the process even further, Duke Power retained ownership of the land beneath the lake and much of the shore. As a utility, its federal regulators had a say over Duke’s development plans for the area. This led, at best, to confusion over who was responsible for public access planning and law enforcement. At worst, the situation provoked rivalry among counties and towns. The four surrounding counties tried to coordinate planning in preparation for the lake. Talks fell through for a number of reasons. Not least, Lincoln County would participate in the joint planning proposal only if Duke Power, which had promised to build a state park, agreed to locate the park in Lincoln County territory. When, instead, the 1,486-acre park opened at the northern tip of the lakeshore in Iredell County, Lincoln County refused to participate.

A History of Lake Norman: Fish Camps to Ferraris is available at bookstores in the Charlotte area and online. For more excerpts, a book talk schedule and discussions about Lake Norman history, visit the book’s Facebook page.