Identifying the frog calls of spring 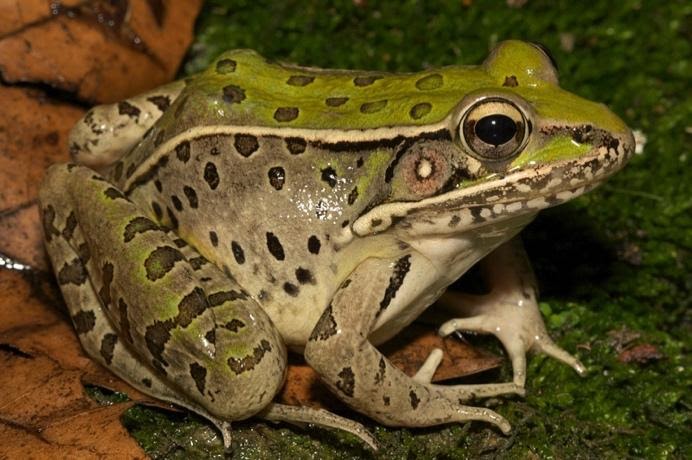 June is almost upon us, and the rush of activity in the ponds, streams, and vernal pools of our state is already well underway. For many native frogs, it’s breeding season.

Right now is a great time to experience the variety of nighttime songs that signal the return of summer in our waterways. The best part is, you don’t need to collect ticks or put on a pair of waders to do so. Frog songs can be enjoyed from a distance, just about anywhere there’s trees, grass or water. So grab your favorite beverage, head to the porch, and enjoy this guide to identifying a few of the most commonly-heard frog calls in central North Carolina in the month of June.

Just as in squares and rectangles, all toads are frogs, but not all frogs are toads! The distinguishing features of toads as compared to frogs are their turned-around ankles and clawed feet, for digging; their paratoid glands, a defense mechanism against predators in lieu of the long leaping ability of frogs; and their dry, warty skin, to hold in moisture, which they take in through patches on the bottom of their bellies.

I have a few of these creatures sheltering in burrows in my garden and up against the siding of my house. In North Carolina, toads are harmless unless eaten, and they’re good for gardens, as they ventilate and add nutrients to the soil with their tunnels, as well as eating pest insects.

Listen for: A musical “creek” with an upward inflection, lasting one to two seconds.

The quintessential sound of spring for many, these small frogs are named for their beautiful call. They love ditches and ephemeral ponds: temporary bodies of water where they can lay their eggs in the winter into the spring without danger of aquatic predators like fish.

Listen for: A trilling call, similar to the Fowler’s toad, but slower, slightly lower, and more musical in tone, lasting three to five seconds and changing in pitch from low to high.

Ranging from gray to gray-green or light brown, Cope’s gray tree frogs mimic the bark of trees in their coloration. In the same vein as the American and Fowler’s toads, gray tree frogs have two subtly-different species that share a range in North Carolina. Indistinguishable by sight, the two frogs have slightly different calls. As an additional distinction, they have a different amount of chromosomes: H. chrisoscelis has two complete sets of chromosomes, while H. versicolor has four. Despite being so similar and sharing a habitat range, the two species do not interbreed.

Listen for: A birdlike peep, repeating every 1-3 seconds.

Given the scientific name crucifer for the cross pattern on their backs, the Spring Peeper is a small frog that for many, along with the crocus flower, signals the first return of spring. Their call can be heard on warm, rainy nights throughout the winter and spring, most frequently from November to April, though they are known to stick around into the early summer.

Lily Cooper is a guest writer and intern for Three Rivers Land Trust, a land conservation nonprofit dedicated to the protection of land, natural areas, rural landscapes, family farms, and historic places in Central North Carolina. More information can be found on their website at threeriverslandtrust.org.